Welcome all to today’s dev diary, my name is Michael, and I've been on the EU4 team as a programmer for a bit more than a year now.

Many of you have noted that the AI has been showing some undesirable behavior after recent updates, especially when it comes to defending their homeland and when choosing which forts to siege. So for the upcoming "Spain" update we spent some time on improving those aspects of the army AI. In this dev diary I will be explaining some of the changes we made. In addition to the improved hard-coded AI behavior, with the upcoming update modders will be able to influence some parts of the army AI with scripts. I'll end this dev diary with a short explanation/tutorial of this.


First I'll go over the changes and improvements made so far. Since we are still working on this update all of this is of course subject to change.

- The selection of armies to go on invasions (overseas) does now consider potential threats to the homeland and will be smaller if necessary. There still is the option that the AI will decide to invade with the full force if it thinks it cannot win otherwise. The calculation of the required strength has been overhauled and should be better in determining how many troops are actually needed.

- Region assignment of armies used to be done about once per year. There was a random factor involved so in some cases it could take even longer. In addition to the random reassignments it is now recalculated whenever the threat to the homeland changes considerably, i.e. there are sieges, large amounts of hostile troops moving towards homeland, etc..

- If there is a threat to the homeland these regions will have a much higher priority when assigning AI agents to regions. Even if not threatened, the homeland has higher priority in region assignment, if enough armies are available. On the province level (Within the assigned region) provinces close to the own country are now preferred when looking at what to siege/where to defend and what war goals to go for first.

- Armies running away from a superior force will still try to find a safe place, but provinces that require using military access or long walks will have lower priority, and if reasonably safe, the homeland receives much higher priority. AI armies are more likely to stand their ground, especially if they are clearly inferior and there is no real chance of winning the ongoing war anymore. Previously the player was often forced to chase them around the world thanks to easily available military access.


Scriptable army AI
A central part of the EU4 army AI is the evaluation of provinces, which determines where and when armies move to. There are already many defines you can change to tweak the outcome of this evaluation, but starting with the coming update you will also be able to change or even overwrite the evaluation score by using any trigger you like.
You will find new script files that have some basic functionality in commmon/ai_army, but you can add as many of your own as you like.

Let's look at a simple example:


Code:
For now the top-level scope is always "province". We might add different options later. The second level is just a name you can choose freely and it serves to separate different modifications you want to apply. Just like event probabilities the starting value for these is 1. The interesting scopes are "active", "eval_multiply" and (not shown) "eval_add" and "eval_overwrite". With those you can control the modifications that will be applied to the evaluated province score. In this case it will be applied whenever the country is at war.
It is important to note that the evaluation of provinces happens very frequently for all armies in the game, so this "active" trigger will not be checked every time a province is evaluated (Which might happen hundreds of times per daily tick).
It will be evaluated when any of the following happens:
- Whenever you gain or lose ownership or control of a province
- Whenever a war starts or ends
There are three ways to modify the score, you can multiply it, add to it or overwrite it. The factor can be negative and < 1.0 as well so the inverse operations are also possible.
Note that armies prefer the province with the lowest score.

While you can influence armies a lot with this, there are still some hard-coded things that will always take precedence and obviously armies will still always adhere to the rules of the game (e.g. shattered retreat). It is a nice option to have however and I'm looking forward to seeing if and how it will be used in mods. Of course it is also possible to break AI behavior with this, so I'd recommend being careful, especially with "eval_overwrite".

To debug your script you can use the AI mapmode. In this mapmode you can see the evaluation scores for every province if you select an army. You can enable this mapmode by running this command in the console: 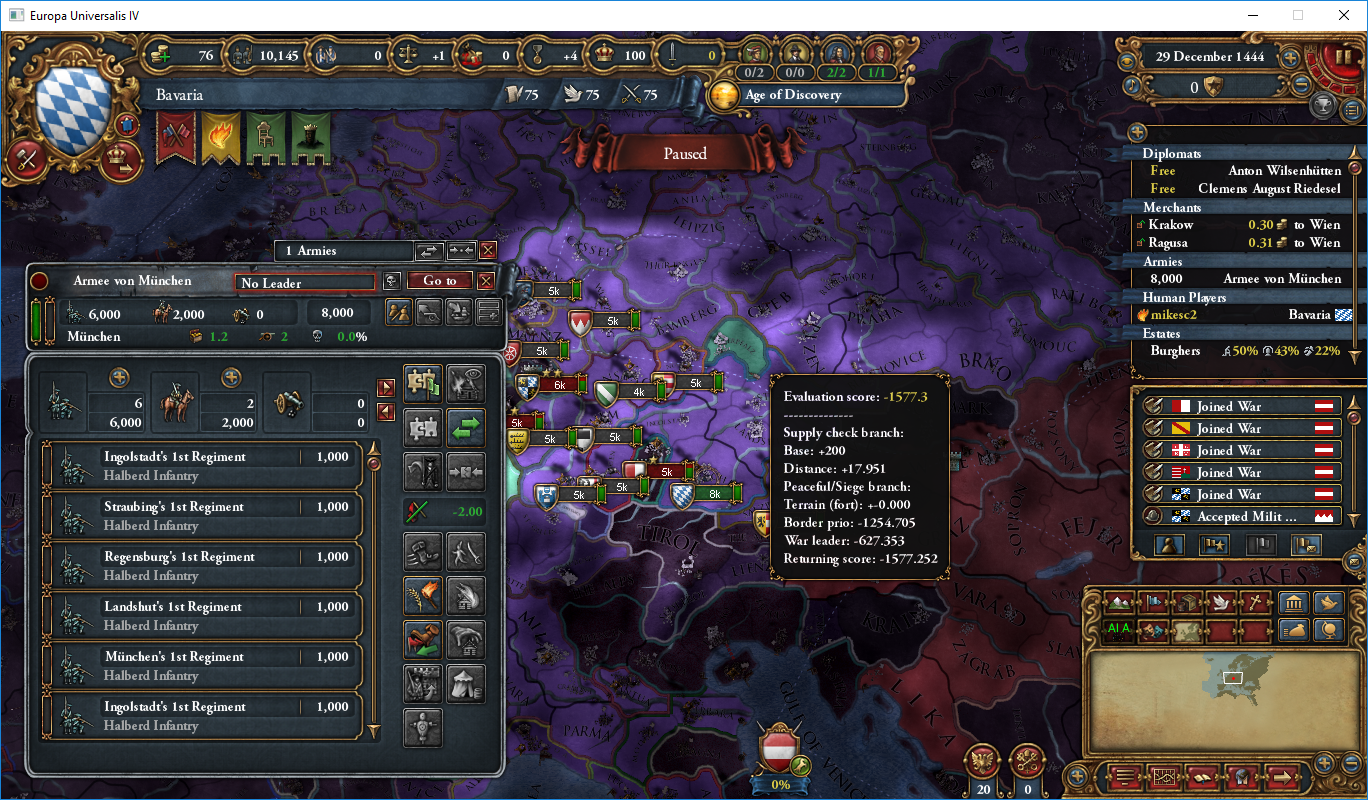 That’s all for today! Next week we will be looking at new features of the upcoming immersion pack. In the meantime, I’ll be watching this thread, so feel free to ask any questions you might have.
Last edited: Oct 16, 2018

This are exactly the AI improvements we needed the most.
Last edited: Oct 16, 2018
R

Can we have a summary of all the province changes after the last diary?
Toggle signature
If I could change my nickname I would update it to Chairman Meow (JP)

It would be swell if you guys fixed that bug where your vassals don't move their armies at all. I don't know if others experience it, has been happening since 1.24 to me.

Great! And with this update you could maybe add in Culture Mapmode to Starting Screen? Come on, it's what queen Isabella would have wanted.
Toggle signature
Pre-industrial historical music epic megathread

I admire your optimism.

I think it would be better if they see our feedback calmly instead of rushing the changes or worse, not changing anything at all.
Toggle signature
A few suggestions for Iberia: https://forum.paradoxplaza.com/forum/index.php?threads/a-few-suggestions-for-iberia.1123194

Perhaps this is a bit out of scope, but are there any changes coming to the endless waves of European coloniser dows against NW nations (even as big a a reformed Inca, for example)
Toggle signature
My suggestions:
Transylvanian culture and reforming tags
Reduce Polish-Hungarian hostilities
Revision of the Végvár system modifier and a Hungarian tradition
B

Scriptable AI sounds really cool! Is there any functionality on how AI will divvy up/organize its forces, or is it mainly a siege/movement/positioning thing?

Thanks for the changes, they are certainly welcome.

As for questions, recently I've noticed that the AI often refuses to attack similar stacks that are sieging its forts. Eg. if a 24k stack is sieging a fort, the AI will often park its similar sized army next to it, wait for the siege to finish and only attack after it's been occupied. It seems to me that the AI is scared of even battles and doesn't factor in the newish defensive bonus when relieving fort sieges. This often makes it lose fortresses to rebels or enemies for no reason. Oddly enough, it often chooses to engage right after the fort has been captured, needlessly taking attacker penalties. Shouldn't the AI be more courageous, especially against rebels or when having strong military bonuses?

I agree with @navaluiki , this isn't neondt's dev diary, so I think we should wait until next week when Spain is in the focus again.

Unless @neondt doesn't mind it?
Toggle signature
Fighting for a good map since 1444.

What about attrition handling?

Would this make scripting something like "rebel" armies going out into neighboring countries from their home province possible? I am thinking of something like robber barons.
Toggle signature
Author of Reichskreis - Flavour in the HRE < Forum | Steam >

This is excellent news!
H

Blobhemian said:
Thanks for the changes, they are certainly welcome.

As for questions, recently I've noticed that the AI often refuses to attack similar stacks that are sieging its forts. Eg. if a 24k stack is sieging a fort, the AI will often park its similar sized army next to it, wait for the siege to finish and only attack after it's been occupied. It seems to me that the AI is scared of even battles and doesn't factor in the newish defensive bonus when relieving fort sieges. This often makes it lose fortresses to rebels or enemies for no reason. Oddly enough, it often chooses to engage right after the fort has been captured, needlessly taking attacker penalties. Shouldn't the AI be more courageous, especially against rebels or when having strong military bonuses?
Click to expand...

Most likely related to this -
ACCEPTABLE_BALANCE_DEFAULT = 1.7, --AI wants this advantage to enter battles typically. (There are some exceptions, e.g. offensives.)

Though if I understand the changes correct, it should be easy to circumvent such behaviour (Ie could make AI take into account things such as defensive bonus of fort/province, military boni etc, so its not just limited to a flat 1.7 times larger force decider)

Thanks! Always love to see dev diaries on the A.I.

A couple questions:
- How do these changes (and others being made) affect the overall A.I's decisiveness? I may be wrong but it feels like these last patches at least the friendly A.I. has been, in analogous scenarios, noticeably less willing to commit to an action than before (e.g. whether to siege province A or chase army B, or be in region A or B), resulting in much walking around but not much getting accomplished (e.g. ottomans at war with mamluks and doing multiple laps of the arabian peninsula). Im curious about the results of the changes to region assignment of armies and how it relates to this.
- How does the focus on homeland defense affect the willingness of friendly A.I. to invade relatively distant foreign lands in a big war (e.g. france going after bohemia or poland in a protestant league war)? Will it be far less common now?