Good afternoon everyone. Thursday rolls around so once more we have some features from the upcoming Rights of Man to share with you. We've already shown off a huge number of changes coming with both the free 1.18 Prussia Patch and Rights of Man but we're still not done yet! Let's check out a couple more new additions.

When concluding a war, it's hard to get a sense of scale for just how many enemies fell to your blades, starved to death in your rolling tundra or were sent to the bottom of the ocean. Personally, I would like to know these figures so I can triumphantly explain to my nation why it was worth exhausting our manpower pool over the Border Friction at Jemtland to inflict massive casualties on our foes.

At the conclusion of a war you will be presented with a Bodycount screen showing losses for both sides and a breakdown of what was lost, how they perished and their unit model, just so you can look them dead in the eyes.

Additionally, you can select the shields for each nation involved in the war to see their individual burden that they shouldered, so you can see who did and did not pull their weight in a war. Very useful for those times where your ally in a war claims that they were fighting all the battles, you just weren't watching at the time. Clicking on the Defender or Attacker icons will show the losses for everyone on that side.

As with most pop-ups, you can toggle the display of this one to your liking. You can also observe game-long statistics about this in the ledger, where we have added pages for army and navy losses for all nations. Enjoy some numbers from last night's hands-off and try not to be scared of Russia, France and Ottomans. 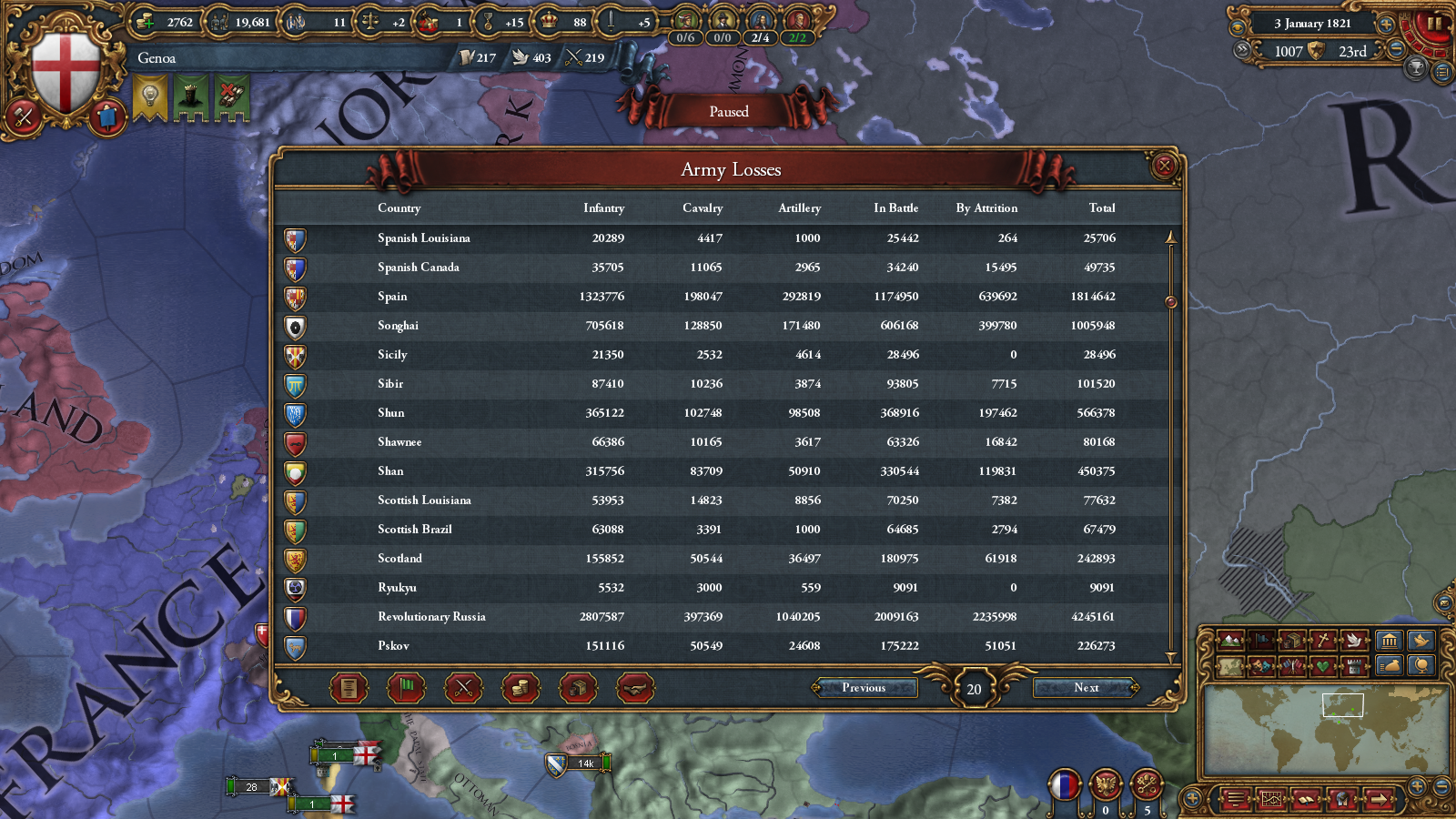 Another minor change we has as part of Rights of Man is an indicator on the Minimap for friendly and hostile forces. 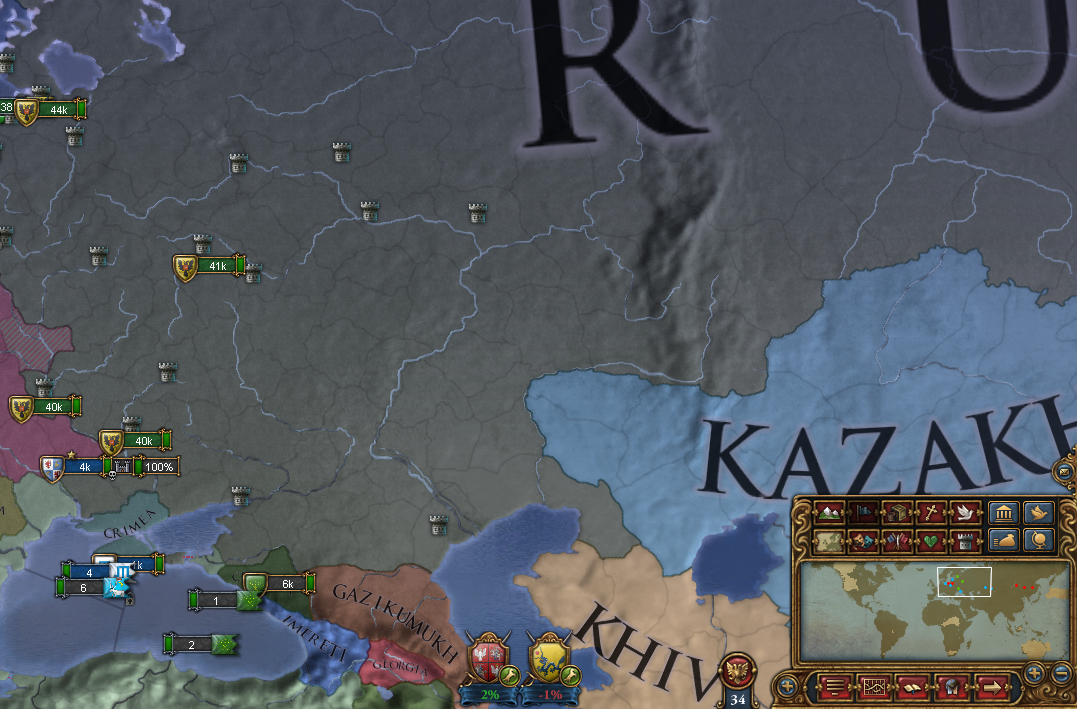 At times, panning around to keep an eye on all parts of your sprawling empire to see if your enemies are invading can be time better spent elsewhere. Now, as long as a nation's units are not covered by Fog of War, they will appear on the Minimap, either Green or Blue for friendlies, or red for hostile. Again, this feature can be toggled on and off.

These are two paid features in the upcoming Rights of Man expansion which will be released alongside the Free 1.18 Prussia Patch. Rights of Man will cost $20 or your local equivalent and be released on the 11th October. Our team is hard at work plotting against each other for the ongoing multiplayer finalizing the expansion but we still have a few more things to show, and will be back again next week to maybe, just maybe, explain what Necromunda was all about.

If you hunger for more, perhaps the Rights of Man Developer Multiplayer will take your fancy:

Thanks Jake, looks useful
Toggle signature
My Mods
My Hungary Overhaul Mod useful for playing for and against
http://forum.paradoxplaza.com/forum/showthread.php?808023-MOD-Hungary-Overhaul

Thanks for the info! The bodycount registers will be entertaining enough to read
Toggle signature
GNU Terry Pratchett
Reactions:

That minimap. So ugly, so useful.
Reactions:

Good work Revolutionary Russia - over 4m army deaths, with more than half due to attrition Good info to have in the ledger.

Not sure how I feel about the Bodycount battle info screen though - the new version will take some getting used to, certainly.
Reactions:

i guess a bugfix diary is boring ... they normaly just come with the patch

so i rly like the body county but i will disable the minimap stuff, i am to old its to fuzzy for me xD
Reactions:

Is it possible to easily see how many have perished in this war so far? Just so I can sunk-cost-fallacy myself into hiring more mercenaries...
Reactions:

Thanks Jake. I like the minimap troop tracking feature, feels like a nice quality of life improvement when controlling a large empire.

Can you tell us if there are any further tweaks being planned for forts? Maybe not for 1.18, but maybe being considered for future patches? It would be nice if ZoC could be reworked. Thanks again!
Toggle signature
Trust all human beings the same - to be and act human - and they will never disappoint you.

I'm already a fan of the Bodycount screen. Will there be any means of distinguishing normal soldiers from mercenaries?
Reactions:

Bodycount is an awesome addition

Will it distinguish between regular troops and mercenaries?
Or will mercenaries not count? (Or are they just part of the total)

It would be nice if you could see the opponents' manpower on the war-score breakdown and on the Bodycount pop-up, I think everyone is sick of going to the ledger and scrolling through just to check manpower of your major opponents in a war. The same with sailors too.
Reactions:

One similar thing that I would have wanted: The ability to keep end-of-war screens for wars I'm not involved it.

It's fun to follow the war of your neighbors, but you can't actually see the results. Some way to see the same screen that you get after one of your wars have ended would be nice.
Toggle signature
Check out my mods:
Expanded Stellaris Traditions which adds 48 new Tradition Trees to the game.
Expanded Stellaris Ascension Perks which adds 60 new Ascension Perks to the game.
Reactions:
H

Before the release please add commas after 1 thousand in bodycount (and in sailors too) for readability.

I bet there are going to be some crazy numbers in total loses in the ledger.
Reactions:
A

Any plans on seeing bodycount for previous battles?