Menu
Install the app
You are using an out of date browser. It may not display this or other websites correctly.
You should upgrade or use an alternative browser.
Europa Universalis IV 76261 EUIV: Suggestions 16285 EUIV: Technical Support 5813 EUIV: FAQ & Strategy Guides 193 EUIV: AAR's, Let's Plays, and Fan Fiction EU IV: Alternate History Short Story Contest Contr 26
Showing developer posts only. Show all posts in this thread.
Show all posts

Hello, my name is Carlos Lundhall.
I'm a 3D-artist here at Paradox Development Studio and today I'm going to talk about a coming visual change in the coming 1.19 patch: New vanilla sprites!

I started playing EU4 when working on the Mare Nostrum dlc to get a feeling for the game I was working on, and BAM! I was hooked!

I now have 300+ hours in the game (I know, I know, it’s not a number to brag about) and love playing underdogs like Teutonic Order and Byzantium.

Under all this hours in the game it really scratched my eyes seeing the old vanilla sprites compared to the new ones, so I decided to remake them, one by one.

Here's a comparison between one of the new vs old sprites. 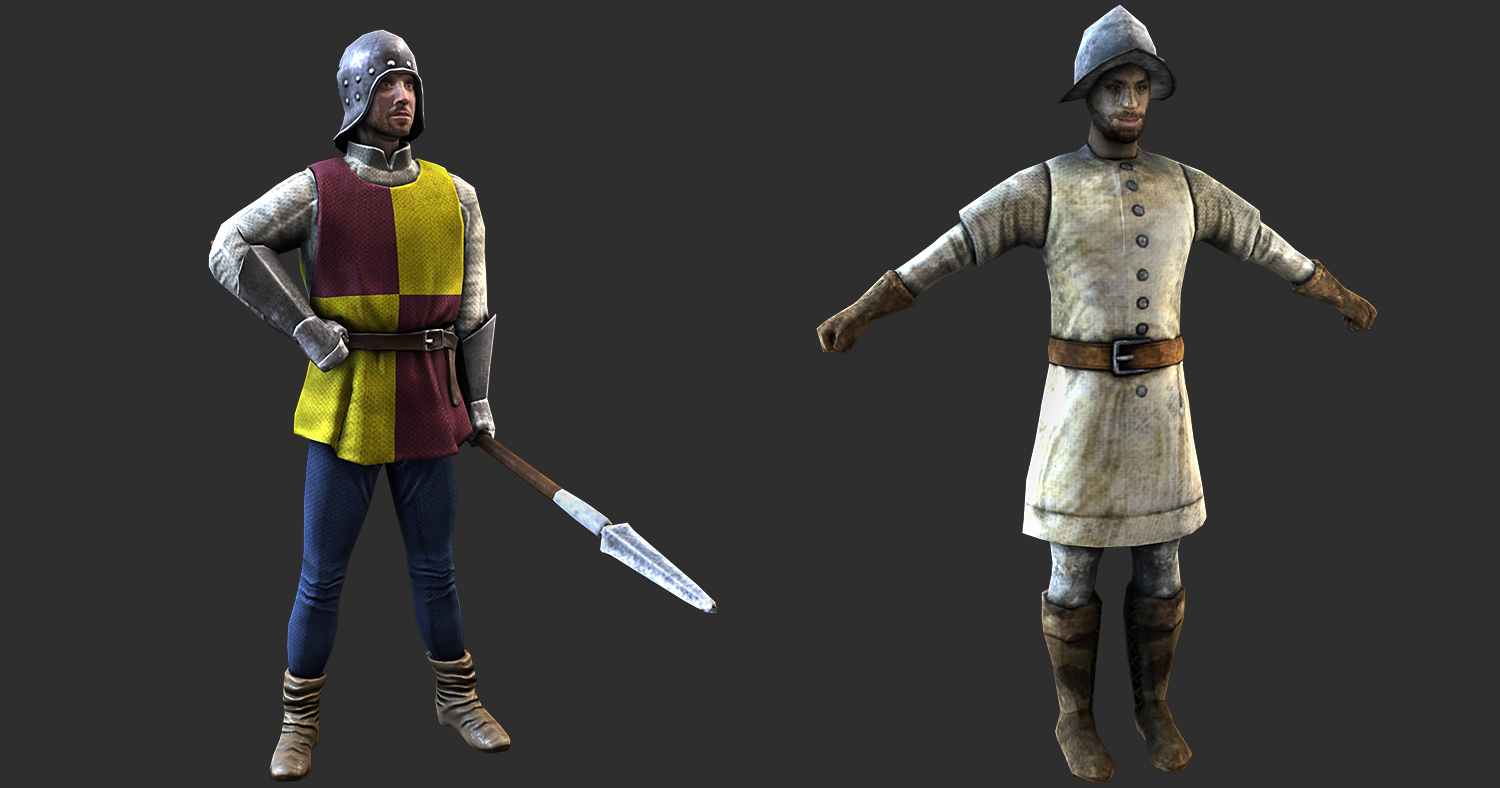 At first I was thinking of this as a personal project that would take a lot of time to realize.
But after finishing the tier 1 western vanilla sprite using my free time and what we here at Paradox call Personal Development Time (basically we get a day each month to work on what we want as long as it is related to what we do in some kind, to develop our skills and try out new things), I pitched the idea to Catalak to give me some actual work time to redo some sprites, and I got it!

From there it was business as usual, taking the sprites trough my character pipeline.

First off there's a lot of research. I have a good 1200+ reference pictures for all the different tiers combined, and it's being filled with new references almost daily (I guess I like to collect stuff).

Then comes the concepts, where I try to do it old school style and just draw it on paper.

As you can see I had the ambition to remake the tier 1 cavalry also, but there was no time for that.

Next thing is to make the sprite!

I'm not going to bore you guys to death with all the technical 3D stuff that goes into making a model, so in short the process is as follows:
* Concept
* High poly modeling
* Low poly modeling and UV mapping
* Texturing
* Get the model into the game.

This picture below visualizes the process in a VERY rough manner.

Also there’s a lot of feedback from my dear colleagues, especially mr Carlberg, whom is a bottomless well of history knowledge and technical 3D stuff.

I stumbled upon some obstacles along the way, one of the biggest obstacles was that there was some tags that used copies of the vanilla models, and were unique in the script.

This gave me some countries that needed either
1. be redirected to use the new model and texture, and be colored with dynamic coloring, or
2. to make unique textures for them.

I went with the second option, here's some of them. 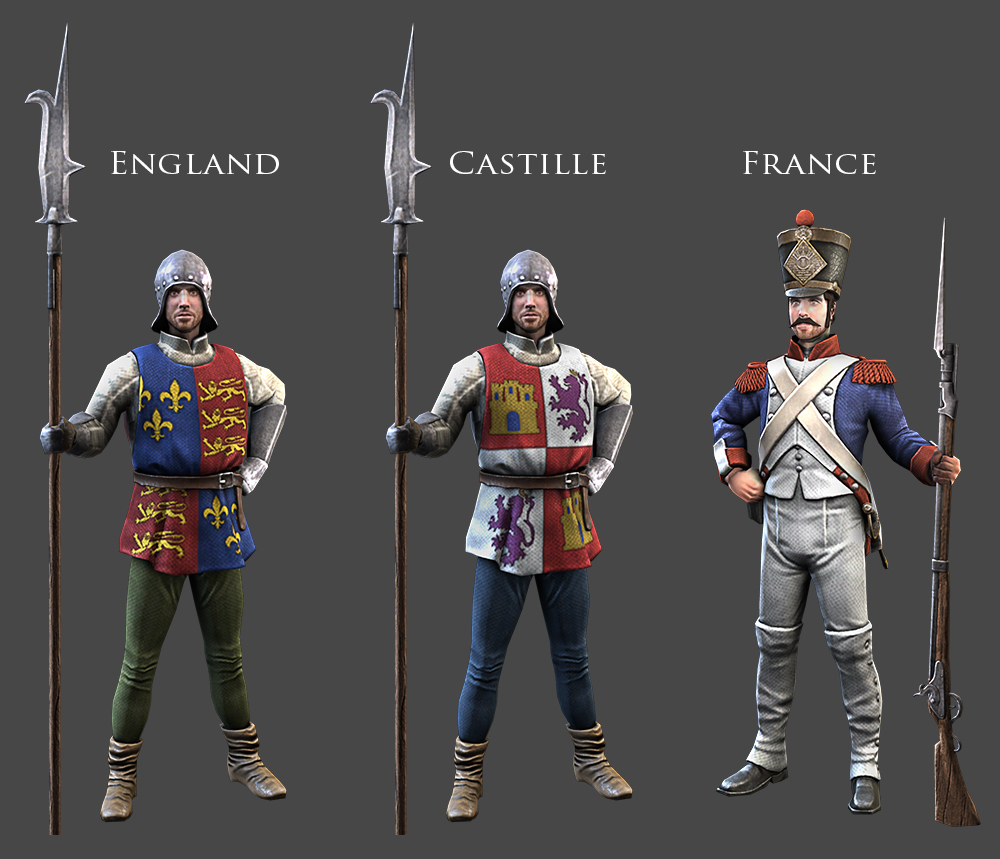 Finally I remade the weapons also, I felt that they too needed a level up in visual quality. 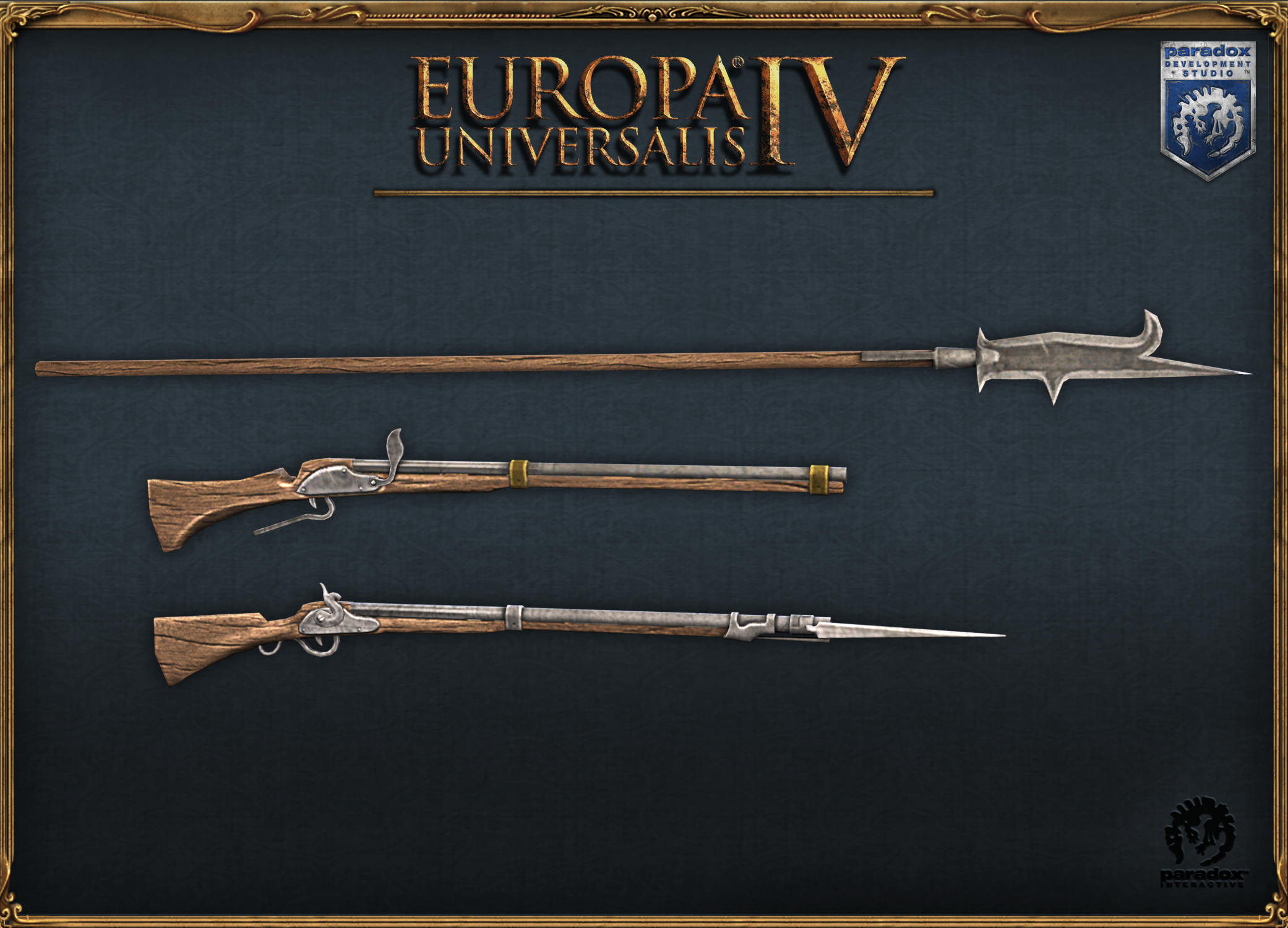 And here's the final sprites. 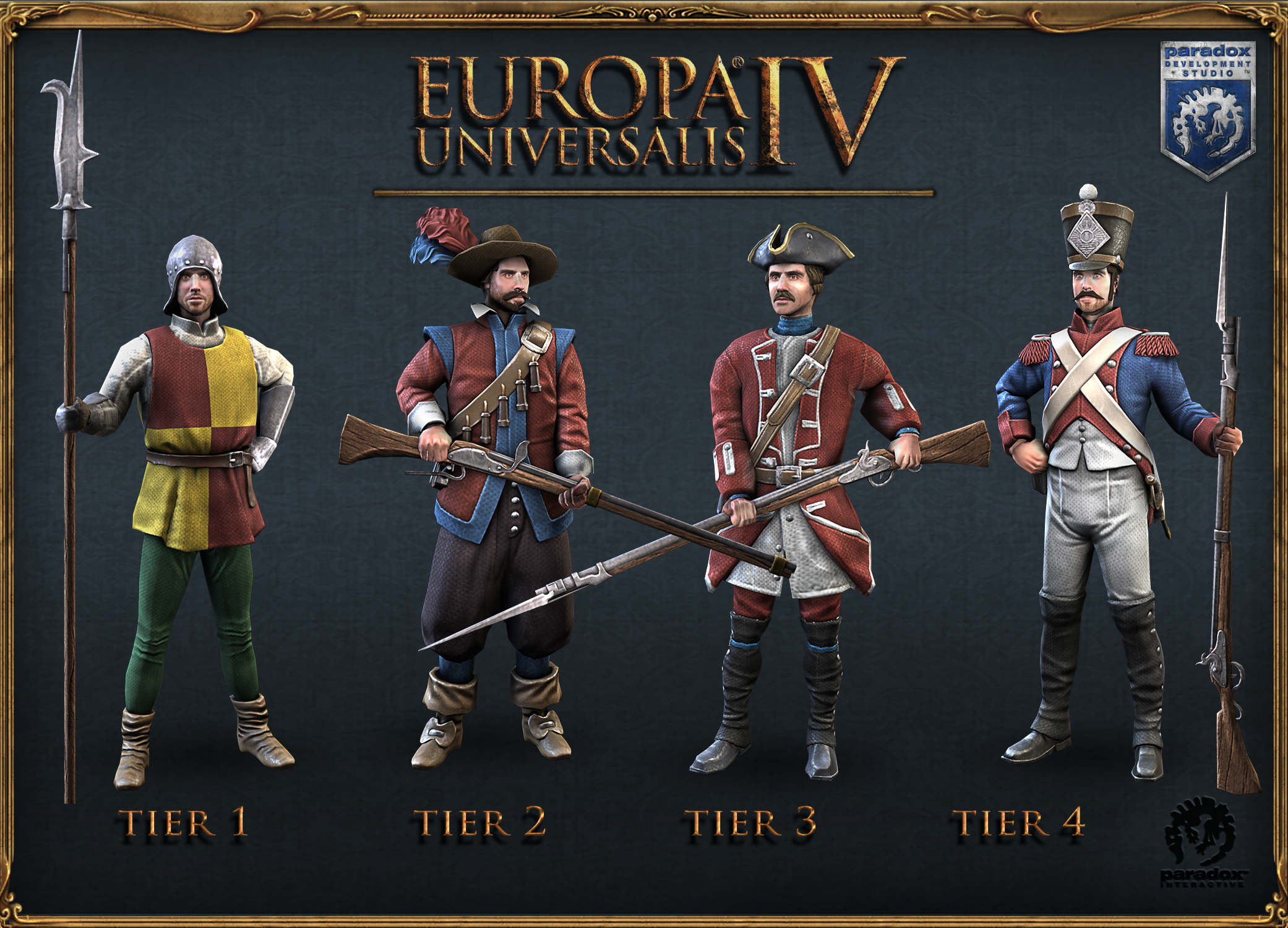 For the tier 3 sprite I felt that we had such high quality material already, so I put together a sprite from existing parts.


So that was all for me.
Thank you for your time and I hope you enjoy the new sprites!
Reactions:

Thank you all for the positive feedback, I'm glad you like the changes.

I'm only able to answer some of you, due to time, and the fact that I don't know some of the answers.


HumanMarine said:
Is this going to be everyone's vanilla sprites, or is it just focused on (parts of?)Europe/Western Tech?
Click to expand...

It's only the vanilla sprites for western Europe, so Poland and more eastern countrys don't use this sprites.


Blobhemian said:
Great job, the change was much needed. Now i see why the more recent unit packs used to have the low resolution weapons, it felt so strange. Now that the unit packs have a little bit of attention as well, i'd like to ask if it was possible to fix some minor unit pack issues that are often brought up at different places but always somehow get lost.

1. Tier 1 Italian DLC units use wrong one-handed animation, it's easy to change it in the dlc files, but I'd rather have it fixed officially since i don't know how to make a mod for it and have to rewrite it directly in the game files, which seems wrong ^^
2. Mamluk special cavalry models are overridden by the new infantry models. Easy to fix it by changing version number in the dlc files and some people might actually like the infantry models more, but since people paid for the original, it would be fair to let them use it.
3. Please release the old italian "T3" unit models for modding purposes, while the change was much needed due to immersion reasons, people paid for the original and it would be nice to put them to some use so that none of your work is wasted
4. Bukhara should totally use the Uzbek models, Prussia the T2 Brandenburg model and the new Golden Horde tag should use the (now) Great Horde models, just to keep things consistent and avoid some small disappointment when forming logical successor countries
5. The new 16/17th century rifle floats in the hand of the vanilla eastern T2 units, I don't even know how i managed to notice that one, let's hope it will be fixed by replacing the old models altogether

Anyway thanks for your work, you finally made playing tags without unit packs somewhat more satisfying again!
Click to expand...

Thank you for this feedback.
I don't really visit the forums that often, so I've missed some of this problems.
I will totally look in to 1, 2 and 5, but no promises.


smellymummy said:
those are really massive ends on the halberds. Were the pointy ends of those used at the time really that big?
Click to expand...

Yes, at least the reference I used looked similar to the halberd I did.
Then there's also the balance between making it realistic vs looking good in the game. Som stuff just looks BAD if made totally realistic, so some exaggeration will occur.

What I would really love in the sprite department is for the sprites to be de-synced so you don't have 10 armies standing around in the HRE all doing synchronised hip waggling.
Click to expand...

Yeah, tell me about it!
I don't think that's something we will redo in the near future.
BUT, I made several textures, using different dynamic coloring sections in the texture, to make some diversity on the tier 1 models.
My feeling was that it broke up the syncing a bit, not having all the sprites look the same texture wise, but maybe that's just me.


Romaoplays said:
This must be very hard, congrats for your great work!!... This is the best I can draw ( both IRL and in the PC ) Hehe, I too drew like that once in a time, just practice .

What about all the unit packs? What role do the play now? Is there any point in getting them now?
Click to expand...

Yes of course!
They give you some flavor!
This is just vanilla stuff, and there's lots of cool sprites in the other unit packs IMO.


Wagonlitz said:
@Nifelfang did countries like Denmark, Castille, and England really have their flag/Coat of Arms on the front of their uniforms? Or is that just done to make them stand out from each other?
Click to expand...

I would say in general, no, they didn't.
Some of my references did had the coats of arms on their tunics though.
I made it like this because I had the opportunity to make unique textures to some of the tags, and I took some artistic freedom, but not totally unattached from reality.


Tirenedon said:
These new models were a really nice surprise! Thank you for making them, they look great. I hope that the Eastern unit graphics can get a overhaul some time in the future, from tier 2 onward they really show their age.
Click to expand...

I woudl love that too!


EldarPanic said:
@Nifelfang will you ever rework the byzantine units?
Click to expand...

IF I'll do it, it would be on my free time, and that's something I don't have much of, so probably it will not happen .

I've worked here for a couple of years actually.
Before starting working on PDS, I worked at Paradox North, making Wizard Wars. Many of the robes you see in that game is my stuff.
Also I did some "guest appearance" in Magicka 2, were I did the map you see behind all the menus.


sr999 said:
In your first photo (I think I have it attached here) - is the guy on the right a zombie? Cool!
Click to expand...


PurpulaPhoenixum53 said:
Nice! Love the tier 2 model. Also will this override current models for nations that already have a content pack for them or is this starting fresh? Finally, totally agree Eastern models need to be fixed.
Click to expand...

Sweet! Tier 2 is my favorite too I think .
This is when you start fresh, so if you have no Unit Packs, this vanilla units will be the ones showing.


random258 said:
How does the newly-made French model differ from the tier four, aside from colour? Or is the French one not unique to France, and only shown with the French colours?
Click to expand...

That's the only difference, the colors.
Most of the sprites will use dynamic coloring, but for some I did some actual unique textures, because I found good references for them.