Hello everyone and welcome to another developer diary!

Today I will talk a bit about what patch 1.23 will bring to the greater Iranian region, from the Oxus in the east to the Euphrates in the west. At the end I will also bring up some additions we have made to trade goods.

The Timurid Empire under Shah Rukh​
From his base in Samarkand Timur Lenk once conquered an empire that stretched from Anatolia to India. While Timur died in 1405 the Europa Universalis start is still in many ways shaped by his actions. It was Timur’s attack on Delhi that crushed the Delhi Sultanate, giving rise to most of the independent states on the subcontinent and his attacks on the Ottoman Empire and the Great Horde among others created the political order we are so used to in this game in their regions.

After Timur’s death his empire was thrown into a violent civil war which was eventually won by his son Shah Rukh. His rule has been marked in many ways by the building of a durable state, patronage of the arts and the rebuilding of infrastructure. Above all however, Shah Rukh has struck down on any rebellions swiftly and with an iron fist, determined to not let his father’s empire crumble.

As our game begins Shah Rukh is an old man, plagued by sickness. He has left the daily rule to his wife Goharshad and the outer provinces to his many sons and grandsons.

One of these grandsons, Muhammad bin Baysonqor, the governor of Ajam, has already made several moves that could be seen as rebellious. Historically Shah Rukh would die two years later while on a campaign to chastise this grandson. Following the death of Shah Rukh the entire empire dissolved into a multi-factional civil war that lasted for decades. 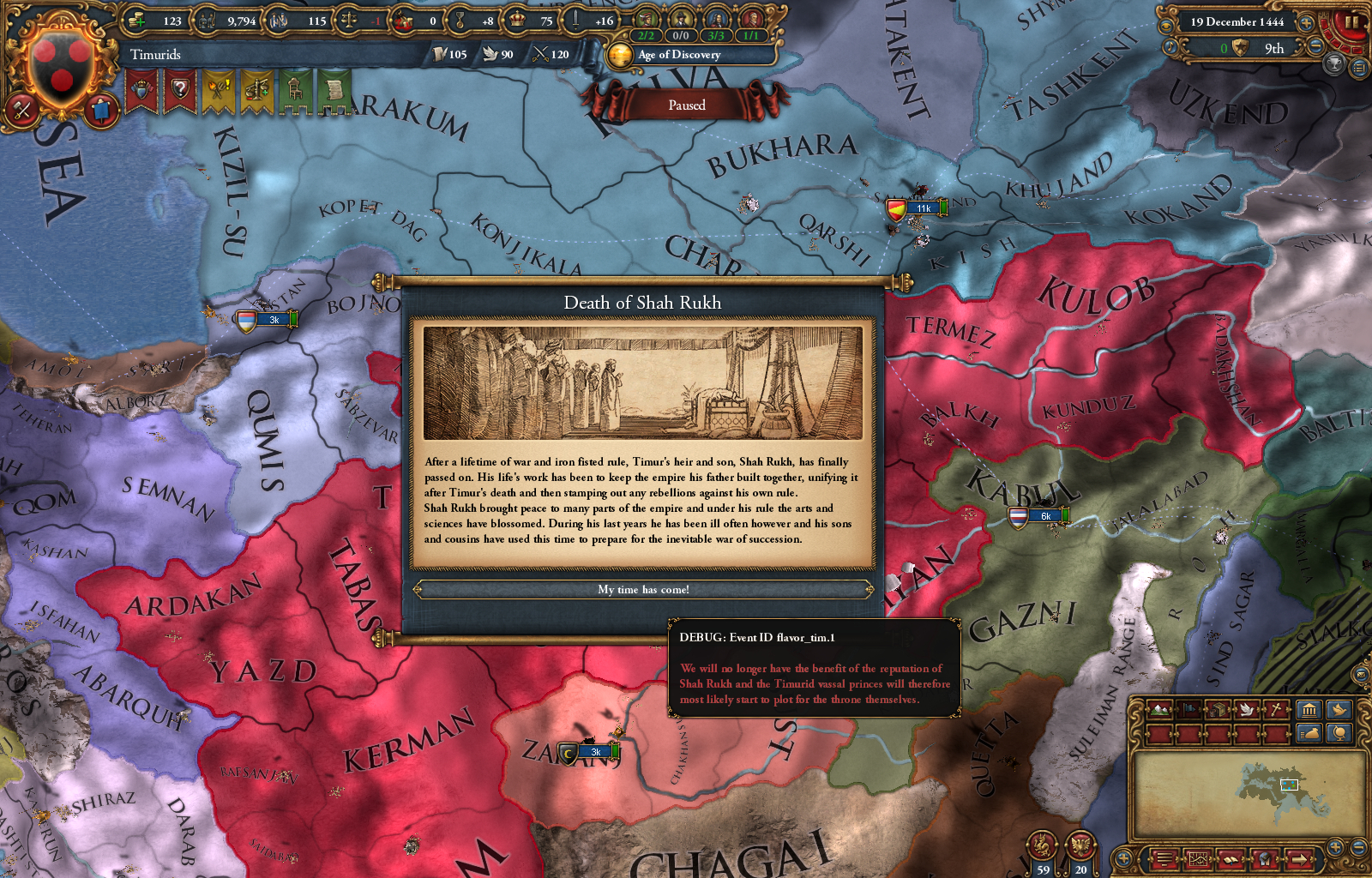 In order to better portray the situation at start, with a number of ambitious princes waiting for Shah Rukh to die, we have broken up the Timurid Empire into its constituent parts. The Timurids under Shah Rukh in Herat are still a playable faction with most of the governors now starting as vassal states. At start the liberty desire of these vassals is held in check by Shah Rukh himself, but when he dies the grace period is over and the princes are very likely to try to conquer the empire for themselves.

The Timurid Empire is now considered Empire rank at start and the stats of Shah Rukh and Ulugh Beg have been improved to be more in line with their real capabilities.
All Timurid princes that rule their own countries can now reclaim Timur's empire and they all start with different National Ideas (we have also adjusted the Timurid National Ideas to make them a viable option once the Empire has been reformed). 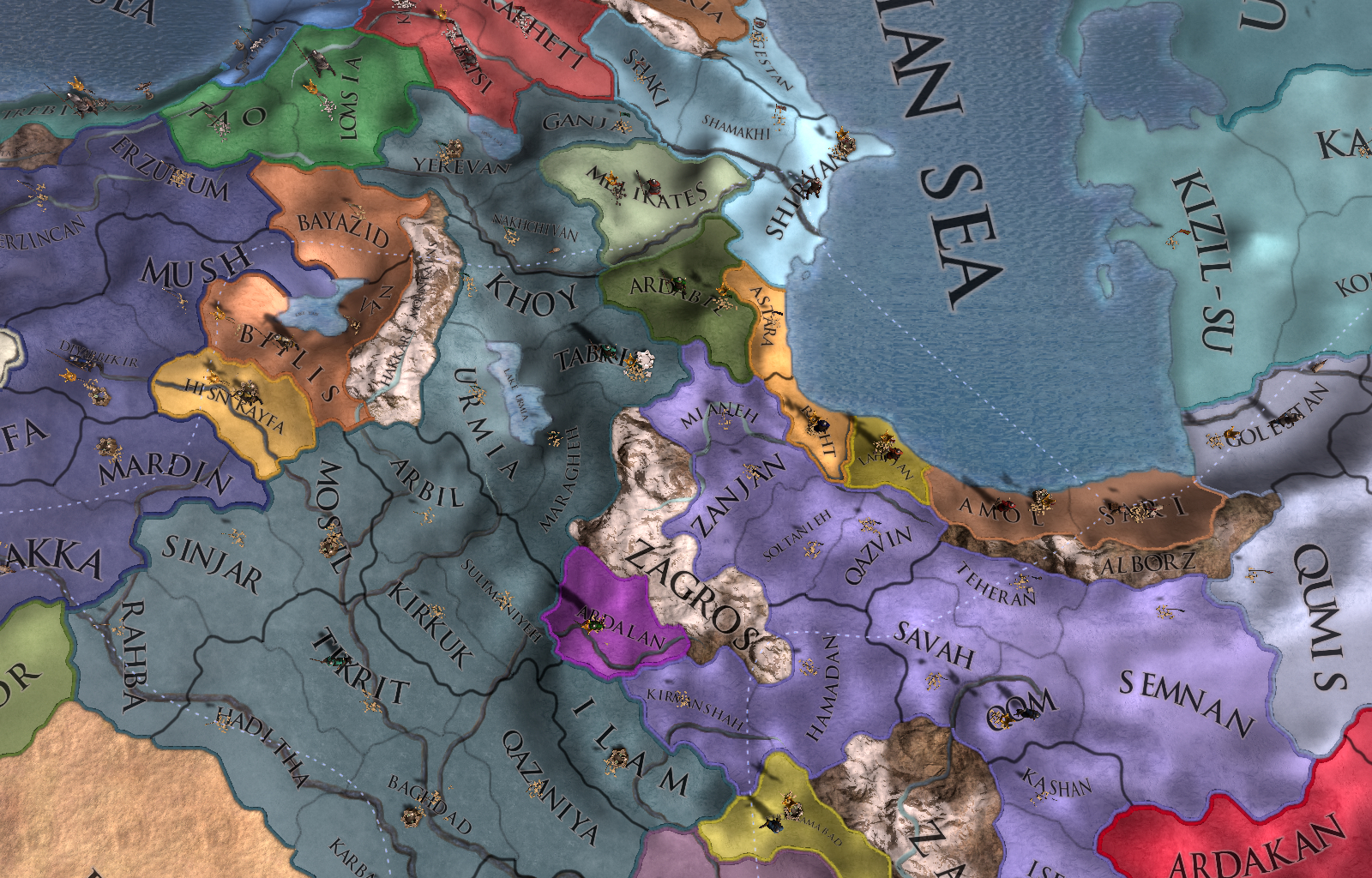 Shah Rukh’s Grandson Muhammad Bin Baysonqor was recently made governor of Ajam, one of the more distant parts of the Empire in 1444.
Rumors of sickness has emboldened the Timurid prince and he has extended his rule over a much larger region than the one he was given to govern. Many western Persian cities have begun to send tribute to Muhammad in Qom instead of Shah Rukh in Herat and it seems a matter of time until he is declared a rebel.
To the west the Qara Qoyunlu are studying the situation with interest, they have not hesitated to snatch away Timurid lands in this area before and they will likely strike again if they perceive weakness.

Along the Caspian sea a number of diverse states are practically independent of Timurid influence as the dynasty has its focus on who controls the capitals at Herat and Samarkand. 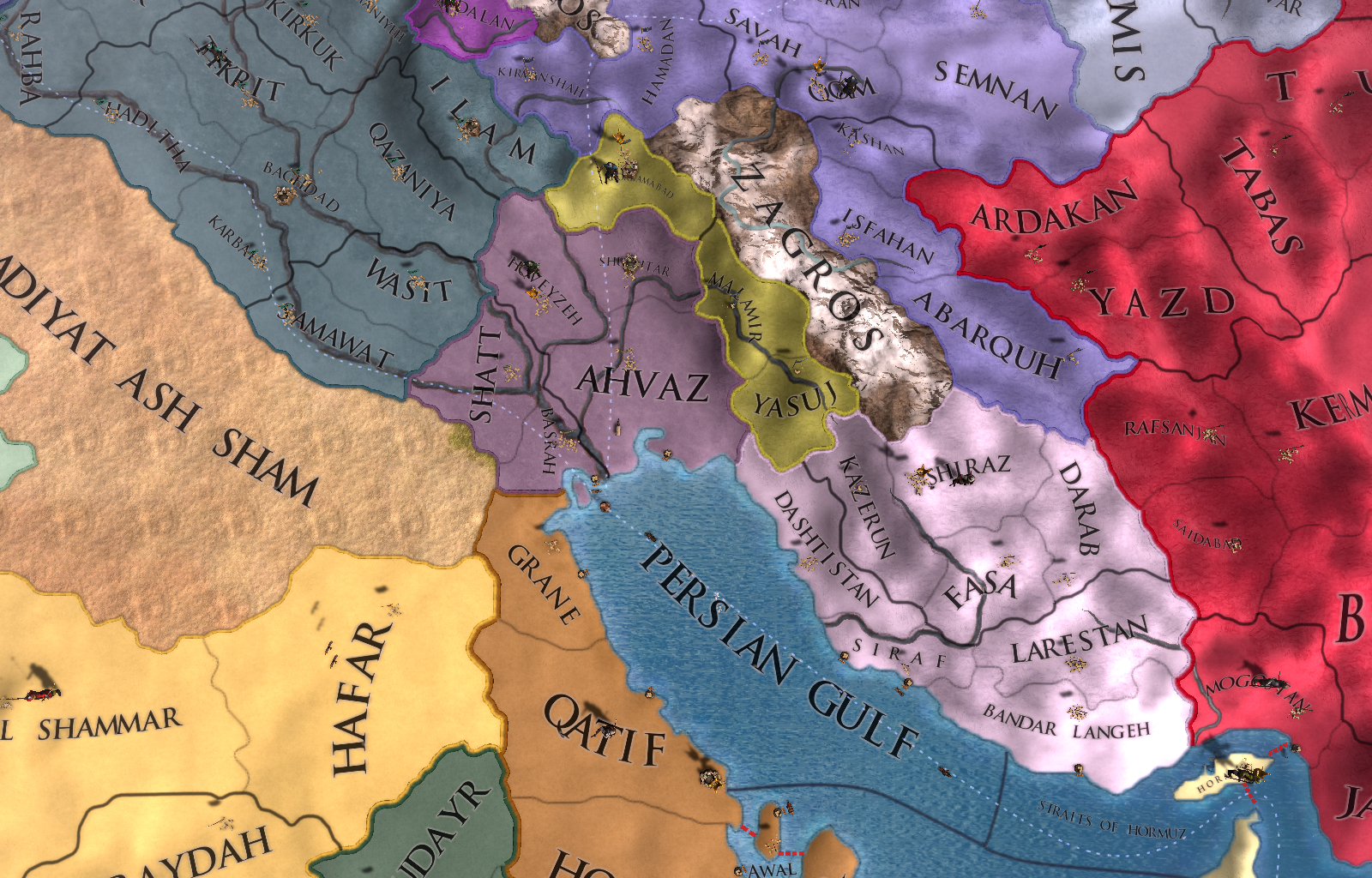 As one of the richer areas in the Iranian region Fars has been broken up into many more provinces, with new revolters, as well as new playable countries added to better reflect the waning Timurid authority in this region.
Fars is a Timurid governorate under Shiraz ruled by Shah Rukh’s Grandson Abdallah bin Ibrahim. Abdallah is only 12 years old however and instead a regency under a local nobleman rules Fars.

To the west Baghdad has only just recently fallen to the advancing Qara Qoyunlu while the Millenarian Mushasha sect has asserted its independence in Hoveyzeh. Like the Safavid order in the north the Mushasha offers a new type of leadership for the heterogeneous religious groups in the region. 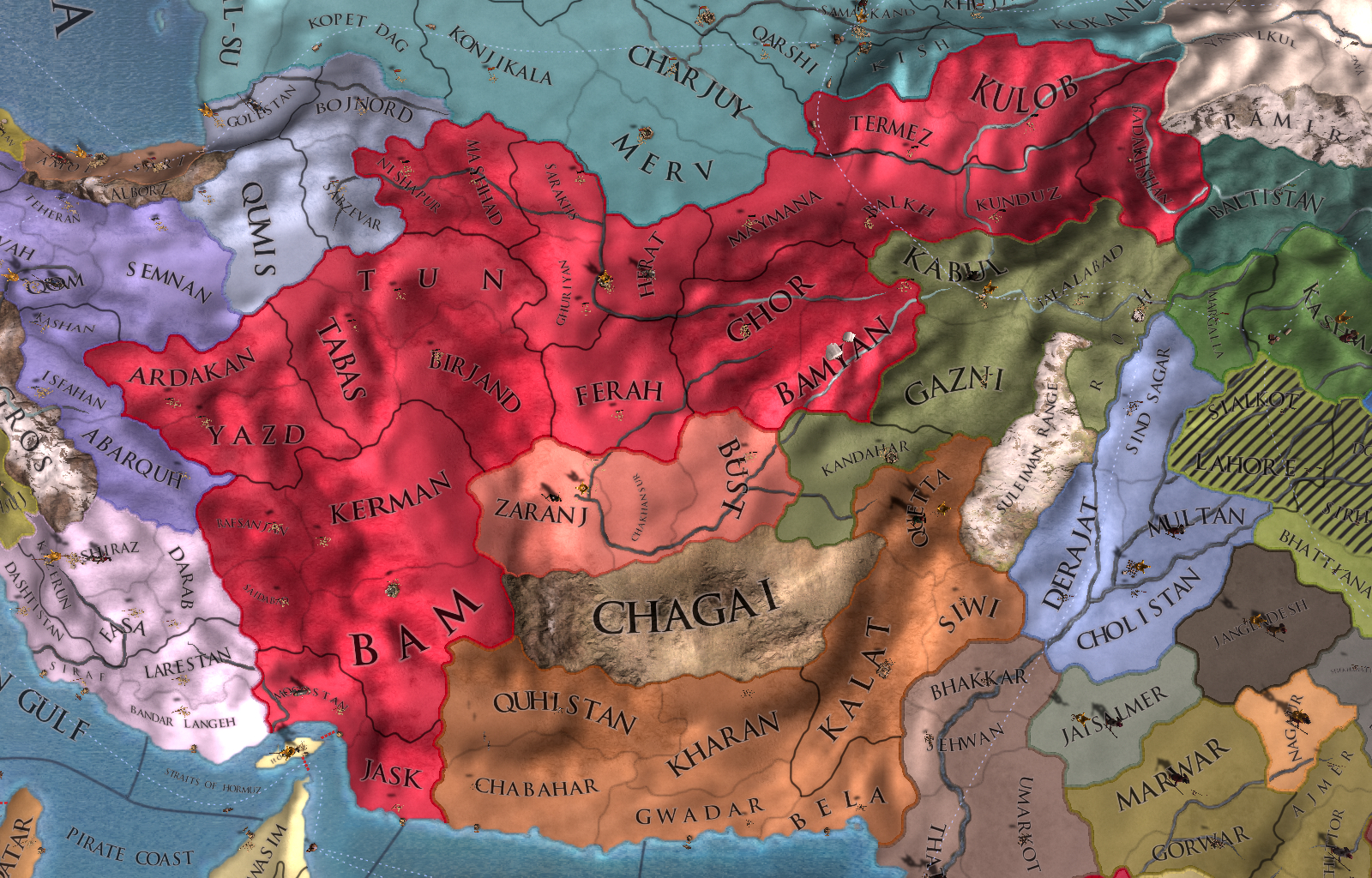 Transoxiana and Samarkand, the original Timurid capital, has for a long time been under the control of Shah Rukhs son Ulugh Beg. He is the most experienced, and in many ways best positioned, of all the Timurid princes in 1444.

Shah Rukh himself rules the core of the Empire in Eastern Persia. The cities under his control have been patronized heavily for decades. Herat is the capital of the Timurid dynasty and has grown to be a thriving center of high culture and learning.

In order to better represent this region in 1.23 we have both broken up a number of its provinces and added wasteland for the deserts and mountains between Afghanistan and Baluchistan so that the historical pass in Quetta becomes more strategically important.
Eastern Persia is now also somewhat richer than it once was, to better reflect the thriving centers of the Timurid renaissance.


New Trade Goods​
Over the years it has been our ambition to flesh out and add detail to the Europa Universalis world. In order to further diversify the game setup we have added five new Trade Goods to the game, as well as some more special province modifiers for specific centers of production for some Trade Goods.


That was all for today from me! Next week’s Diary will be written by @DDRJake

That removes another threat to the Ottomans. I hope this will be considered.
O

I was here at 3 - 4am, ready to unleash hell. "WHERE THE HELL IS THE DEV DIARY!" Then I realised that it's only been Tuesday for a few hours.
Toggle signature
When nobody is looking, I play Muscovy. I ravage Novgorod, terrorize the hordes, instigate and wipe out all dissidents and ensure that Scandinavians all speak Finnish. -Jake 'DDRJake' Leiper (31/03/2017)
The True Fall of Constantinople - a reminder of the true history of PDX Dev Clash
Make vassals use up only 0.5 diplo relation slots
Atwix's Guide to Coalition Dodging and Aggressive Expansion - an absolute game changing must read
Our approach to historicity in design is mainly one of flavor and inspiration - we want mechanics that feel appropriate to the era, but historical accuracy ultimately takes a backseat to gameplay. -Martin 'Wiz' Anward (02/07/2015)​

How will this affect the decision to form the Mughal Empire?

I'm loving the new map changes, though the new trade goods really take the cake! Can't wait for the patch.

Timurids no longer a horde!
C

How exactly does Shah Rukh's life relate to liberty desire? Is it some modifier thats maintained while he's alive or events triggered after his death?

Is the chance of Rukh dying in a given month modified or events involved, or does he have a regular chance to die?

With the Timurids in this position, it seems they'd need to conquer a bit more to form the Mughals. Is it your intent to delay this, or make becoming the Mughals less desireable/nessisary?

Really happy about those new trade goods. Now we also know what @DDRJake 's cow hint was about.
BTW, seems like the Timurids now use Legitimacy, so they don't start as a horde.
Toggle signature
Furor Teutonicus - The Archaeology and Tribes of the Ancient Germanics
On the Boii, Vindelici, Raetians and "Germania"
The Celtic invasion of Greece and the Celts in Pannonia and Transylvania
Heritage Suggestions for some European Barbarians
-
"In signum concordiae patris ac patriae MDCCCVI.
Nec temere, nec timide.
Cui non civium servitus tradita, sed tutela."​

Are the Timurids still a horde? It wouldn't really make that much sense anymore in my opinion.
Toggle signature
Fighting for a good map since 1444.

I hope Bohemia gets some good Glass provinces. They gave Venice a run for their money in the Early modern glass market.

Also France has some areas, like Fontainebleau, of good quality sand for making glass, that should be represented too.
Toggle signature
"I and my companions suffer from a disease of the heart which can only be cured by gold" Hernan Cortes

The inclusion of Birjand is ahistorical; the province should be Qaen, as that city was more important than Birjand at the time.
Toggle signature
PDS would never make a space game as not to a) alienate the myriad of space game devs, b) to maintain a historical theme and c) to start to "settle" and focus on existing IP in the next 4-8 years.

Nice, it will make Timurids -> Mughals much more interesting (it was too easy before imo).

Although, Timurids now are getting split up in many parts but while ago France got "unified"? What's the criteria on deciding what to split/merge?

@Trin Tragula is there any chance for a gem province in the Baltic? (I think Konigsberg fits best)