Hello everyone and welcome to another development diary for Europa Universalis IV.

Today we’ll take a deep look at two new mechanics that are present when you play the Ashikaga Shogunate in next expansion, and also how the setup have changed.

Now you may wonder, where is Japan? Well, at the start of the game, there is no unified nation of Japan, and instead we have a Shogunate with Daimyo vassals.

If Ashikaga loses Kyoto, then they lose the Shogunate, and the Daimyo that conquers it, becomes the new Shogun.

Any nation that is a Daimyo, but is no longer a subject to the Shogun, will become an Independent Daimyo, a government form, that allows you to become an Empire.

Japan can be formed if you are the Shogun, and have at least 25 cities, or there are no daimyos left. A Daimyo can also form Japan if they are independent and there is no other daimyos around.

The first feature is mechanics tied to the Shogunate government form.

There is a yearly prestige impact ranging from -1 to +1 depending on how isolated daimyos are compared to the Shogunate. We’ll talk more about isolationism when we discuss the Shintoism mechanics.

The Shogunate government itself lost the bonus to diplomatic relations, and instead gained a bonus diplomat. However, Daimyos no longer cost diplomatic upkeep.

Shogunates also have 3 abilities they can use from the government screen, for a mere cost of 20 legitimacy. 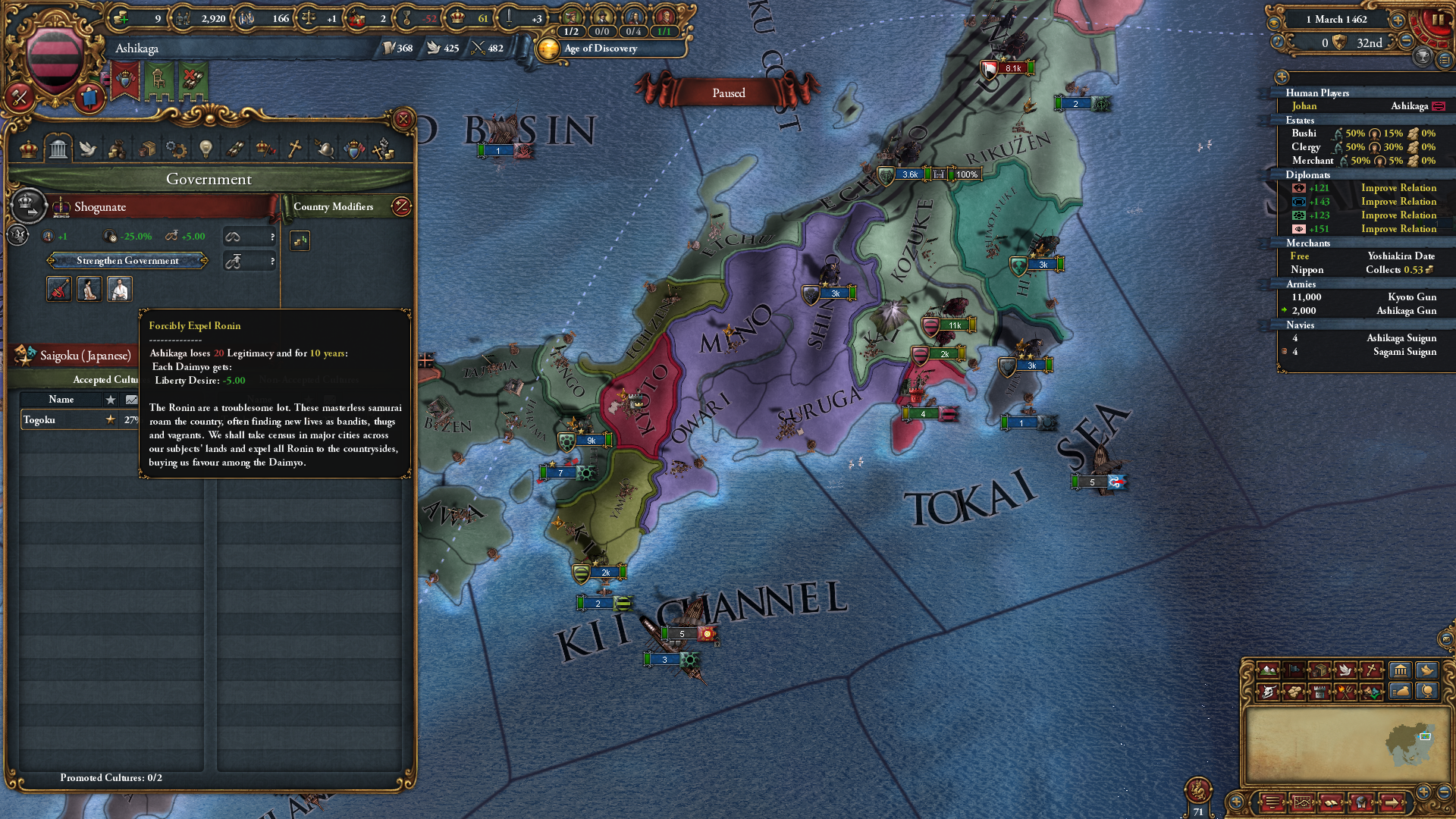 Secondly, there are also five new subject interactions for a Shogunate to use on their Daimyo Vassals, all who require them to have a liberty desire of less than 50%. 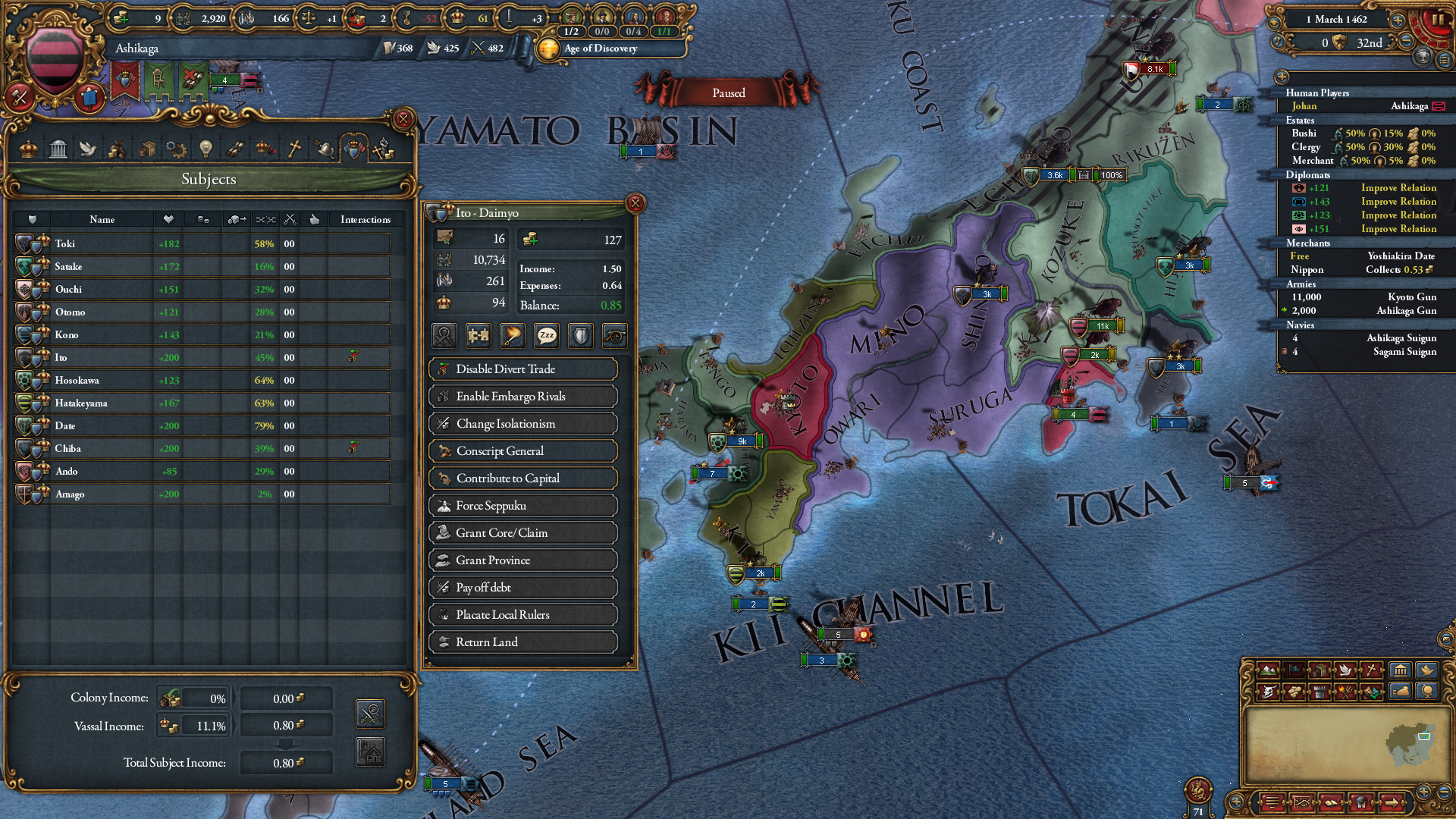 Stay tuned for next week, when we’ll talk about how the tributary system will work...

When you mean "no more daimyos", does it mean you need to integrate each vassal to form Japan? (unlike other unions)

Very interesting read and a bunch of exciting features btw.

What happens when a non-Japanese country take Kyoto?
Toggle signature
Never underestimate the power of Google

With the 'Return Land' action, this basically has the Shogun ask a vassal to return an independent state's core (not another vassal's core). How trigger happy will the AI be to using this? If as a vassal, I get a province in Korea or elsewhere, will the Shogun be an absolute pain and force me to give it back? Can the Shogun ask a vassal to return a province to a state that no longer exists?
Toggle signature
Mods:
Avatar: The Four Nations (CK2)

Ohhh my, a Shinto rework... will Confucian also get some new goodies?
Toggle signature
How to buy Victoria 3 with buckets of ducats (or: how much is Paradox worth in old golden coins).

Small thing, I like the use of the symbols in the outliner for estates. Looks much nicer.
Toggle signature
​

If you form Japan, will you get the imperial dynasty or does the former shogun still become emperor?
M

Could you explain the new mechanics a bit more? How much LD do Force Seppuku, Return Land and Contribute to Capital give?

Is everything free or patch?

Also, I wish you made a separate menu with all those new interactions and bonuses/penalties. Having them in multiple screens might be a bit confusing at first.

Does the AI wage war for Shogunate properly?

All in all, I like the new mechanics. They should make Japan more engaging.
Toggle signature
Sit now there, and look out upon the lands where evil and despair shall come to those whom thou allied. Thou hast dared to mock me, and to question the power of France, master of the fates of Europe. Therefore with my explorers thou shalt see, and with my spies thou shalt hear; and never shall thou be released from vassalage until all is fulfilled unto its bitter end.

Johan said:
Shogunates also have 3 abilities they can use from the government screen, for a mere cost of 20 legitimacy.

For how long does the three new shogun government actions last?
Toggle signature
"Fekke was right" -DDRJake, May 18 2015

I wonder what those graphics with the chains are. Something to do with subjects? Regaccio said:
I wonder what those graphics with the chains are. Something to do with subjects?
Click to expand...

Anyway, this whole diary and no explanation of isolationism? I've said it before and I'll say it again: You teeeaaase!
Toggle signature
"Gonna fly this baguette to the moon somehow!"

Sounds like @Grand Historian will be happy.
Toggle signature
"'Join me, and together we can rule the galaxy as father and son'. What do you think the implication for the Emperor was, we'll get him a retirement home in the Crimea?"
-RedRalphWiggum

The Force Sepukku power sounds like it would be really annoying for player daimyos. Losing that 15 monarch point ruler if you start a war

Also if the next ruler lives 40 years then an AI daimyo has just been shut down surely, though I guess they can join wars via alliances.

What is Bushi estates? Are there any differences between Nobility and Bushi?
Last edited: Feb 14, 2017

I still remember when Divine Wind was released and getting so excited over it, but everything I've seen of this expansion so far blows it out of the park.
Toggle signature
A historical grand strategy game's internal management mechanics are only as good as it is fun to play China in that game.

can you create new daimyos?

Johan said:
Force Seppuku - Current ruler in Daimyo dies, They will not start a war for the next ruler. (AI only) Can be done if the ruler have started a war with another daimyo. Shogun gains 5 x new rulers monarch power.
Click to expand...

This can't be complete. There has to be some kind of cost for Shogun, or you just do it for EVERY Daimyo you ever have, they will never fight and Shogun swims in MP.
Starting with like 15 Daimyos, each giving ~15MP, every ~20-40 years seems totally ridiculous.