Good morning! We’ve talked about Imperial Incidents in previous dev diaries, and since then the design and UI has been refined quite a lot. Today I’ll be revealing two more Imperial Incidents as well as changes to the Great Peasants’ War.

Decline of the Hanseatic League 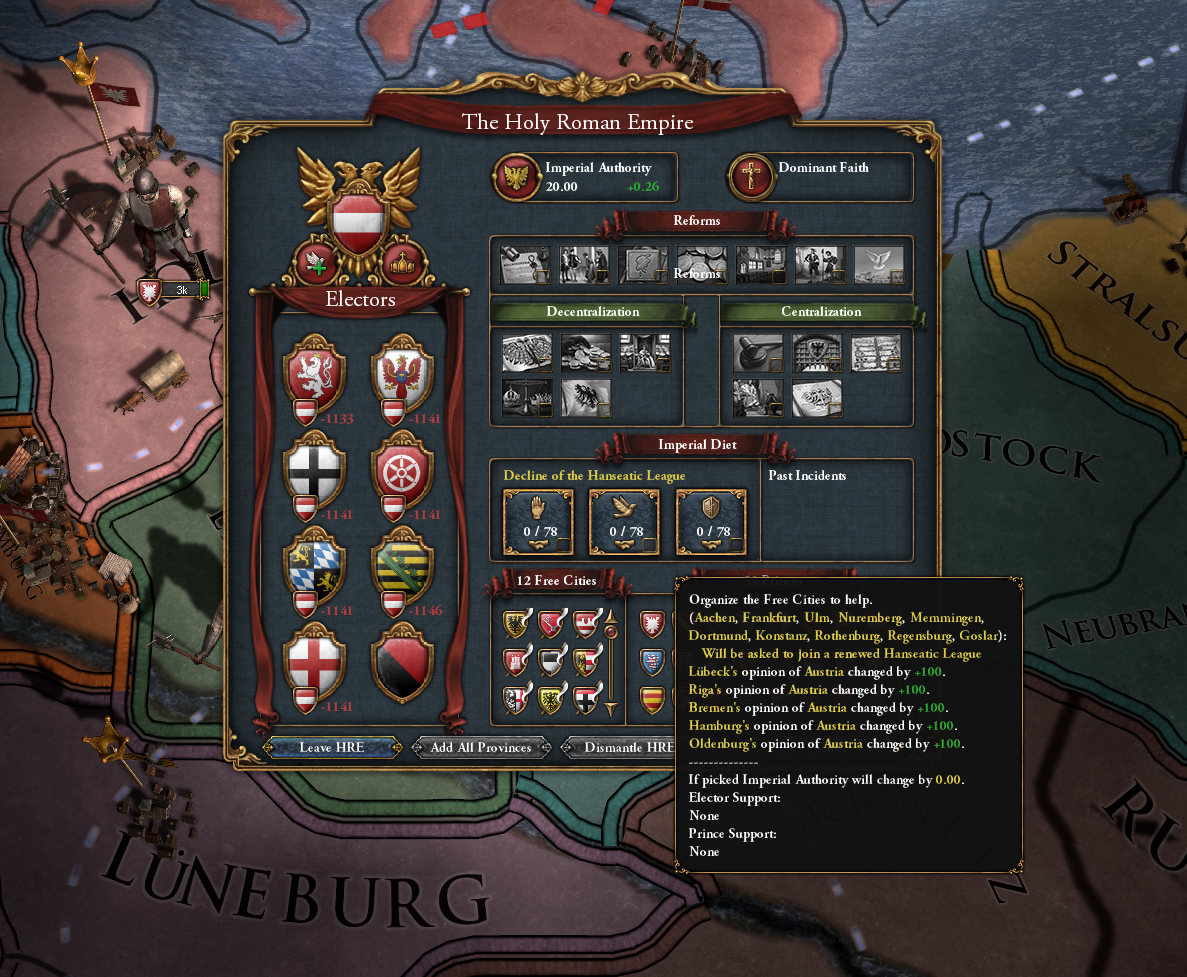 The EUIV period saw the Hanseatic League fall from the dominant commercial power in Northern Europe to a minor clique of merchant guilds. If Lubeck loses its dominance in its home trade node after the Age of Discovery, they will receive an event where they can choose to petition the Emperor for aid. This triggers an Imperial Incident in which the Emperor has three options: 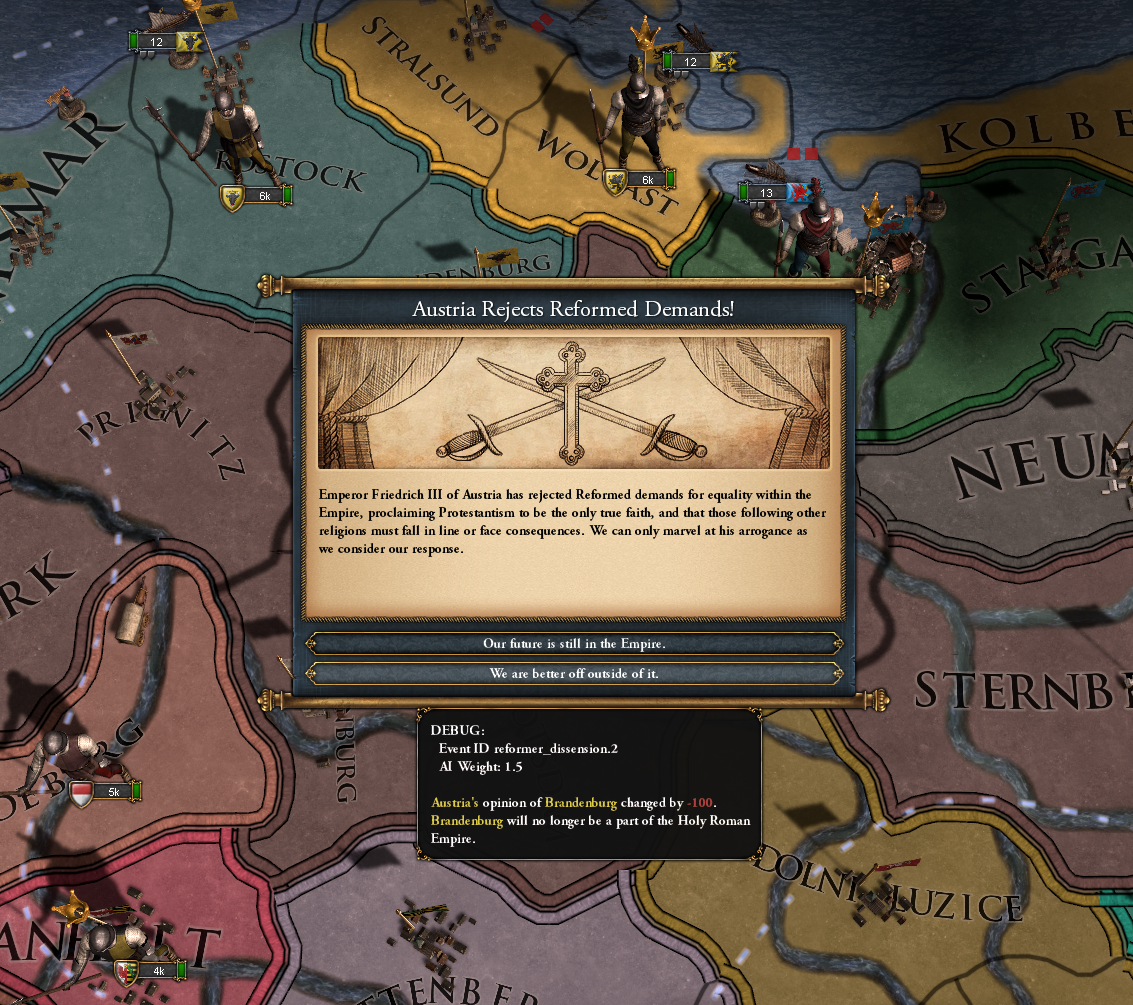 The Reformers Protest is an Imperial Incident that fires after the Protestant League is victorious in the League War if Reformed countries make up a sufficiently large portion of the total number of Princes in the Empire.

This Incident inducts the new Protestant Emperor into their new role by forcing them into a major decision. The Emperor has three options: 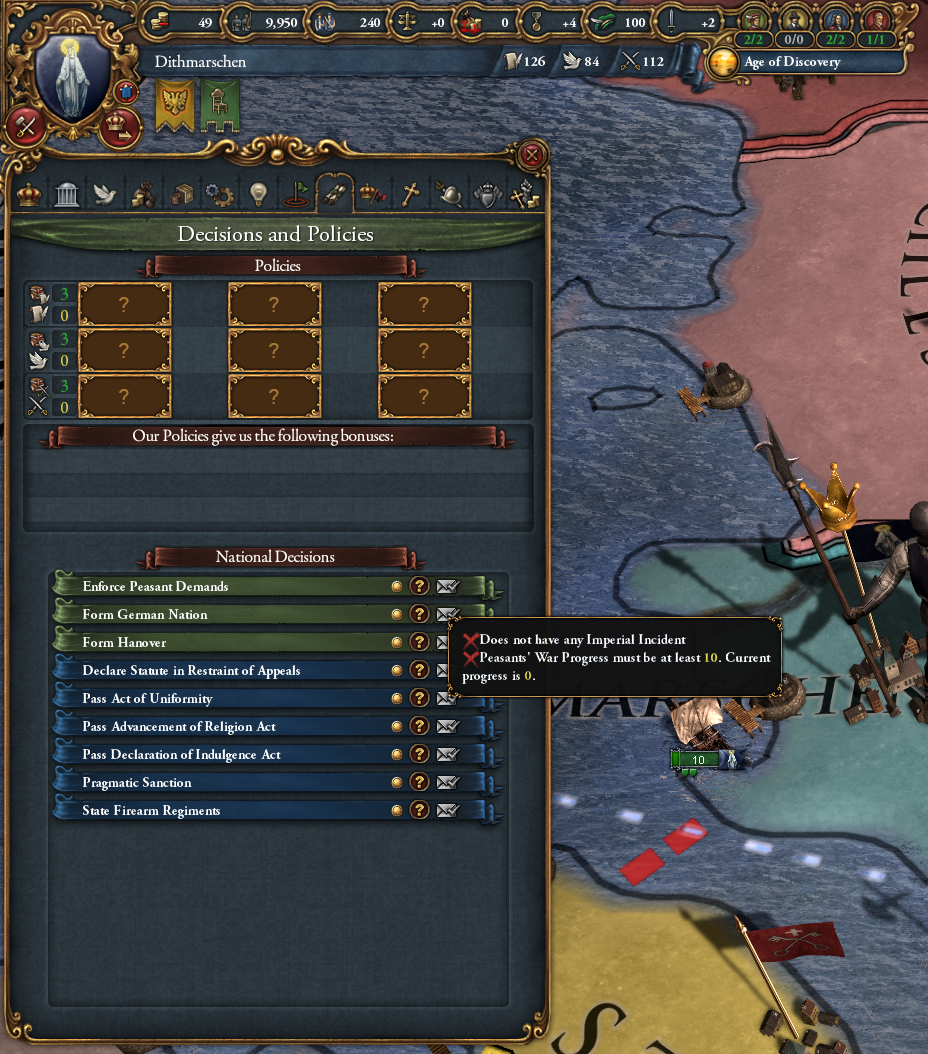 I first talked in detail about the Great Peasants’ War in October, but since then we’ve decided to expand on it to give more agency to players with an interest in either side of the conflict. Here are the most significant changes we made:


A Message from our Artist and our UX Designer

A valued and talented team member, our artist, is leaving us today to work on another PDS project. As it was their last day, I asked if there was anything they'd like to share with the community before their departure. This was their response:

The feature that our artist enjoyed the most was probably working with the Hegemon icons. The shape and visuals for them are something new but still holds that EU4 spirit in them. The favorite is of course the naval icon with the fabulous unicorn.

Other things they loved to work on was making the new bg for the settings screen. It now speaks unity and actually… makes sense?

The HRE windows and pop-up was of course a challenge but thanks to our UX designer they made the interface work and look beautiful as well! Look at those curtains, so smooth.

Our artist also wants to add that “At the end of the day it’s always been so nice to see the reactions to the new stuff we add or update and what you, the community enjoy to see from us and what makes your heart tick with joy when it comes to Europa Universalis 4”

As our UX designer’s last day on the project, they'd like to share the process behind the new HRE screen:

“The HRE was my favorite to work on, because it was a big challenge.

I always start exploring ideas, different layouts and how to display the information. After a few iterations, we decided to move on with the 3rd idea."

As we started developing, we realized that the initial idea for incidents -beautiful and fancy tapestry- was not clear enough. So we decided to go on with buttons instead.

Because of that the entire layout needed to change, as we didn’t need all that space for incidents.

To show a new idea to the team, I did a simple wireframe, moving the reforms to the upper part and incidents down. Also decided to display imperial authority and dominant faith in a clearer way.


Wireframe to discuss with the team


Mockup based on the wireframe

And finally, for the last iteration, we noticed that the numbers inside the buttons were not clear and didn’t help players to make a decision. To solve that, I suggested using an icon representing what kind of decision was that and added the numbers of supporters.

“It was an honor to be part of EU4 and hope you all enjoy Emperor!”

We all wish both our artist and our UX Designer the best of luck in the future, and we're sure they'll go on to do great things at PDS.

That’s all for today! Next week Groogy will talk about a new feature coming in Emperor as well as a very cool feature for Custom Nations. And since I’m here I’ll also reveal that the much-anticipated Hussite/Bohemia dev diary is scheduled for the week after next. Hope you all have a great week!
Last edited: Apr 14, 2020
Reactions:

Will there be any imperial incidents depicting the struggle between emperor and papacy?

neondt said:
Next week Groogy will talk about a new feature coming in Emperor as well as a very cool feature for Custom Nations.
Click to expand...

I'm guessing it's the ability to choose a DLC unit pack for our custom nations?

Will leagues and league wars somehow be integrated into the framework of imperial incidents?

On the last screenshot there are 78 princes in the Empire. Does this mean that the requirements for getting an achievement “Voltaire’s Nightmare” were changed too?
Toggle signature
https://forum.paradoxplaza.com/forum/index.php?threads/streltsy-disasters.1104950/ - my suggestion of unique disaster for Russia and nations with primary culture of East Slavic culture group

Damn, I really hope you will now be able to pick from the various CK2 heresies if you use custom nations, their religions don't need mechanics imo, but it would be epic to rp as a last Jain nation in India for example, or a kathar remnant french duchy. I love alt history and sandbox scenarios, gimme more of them

A big thank you to the artist and UX designer!

neondt said:
A valued and talented team member, our artist, is leaving us today to work on another PDS project.
Click to expand...

Will Catholic/Protestant nations get a opportunity to leave the empire if the other side wins a league war?
Toggle signature
Culture: English
Religion: None
Traits: Lazy, Shy, Just, Gluttonous, Lunatic, Flagellant, Irritable

I have ignored a few users here for various reasons. don't be confused if I don't respond to your replies to my posts.

Also, if the art is mostly ready, this means that we are close to an actual release.
Toggle signature
https://forum.paradoxplaza.com/forum/index.php?threads/streltsy-disasters.1104950/ - my suggestion of unique disaster for Russia and nations with primary culture of East Slavic culture group

Will Friesland finally start as a peasant republic as well?

neondt said:
And since I’m here I’ll also reveal that the much-anticipated Hussite/Bohemia dev diary is scheduled for the week after next.
Click to expand...

Yaay, thanks! I just hope you fixed the map.
Toggle signature
Culture: Moravian Czech
Religion: Atheist
Traits: Lunatic, Greedy, Slothful, Proud, Cynical, Paranoid, Suspected Demon Spawn
“I am king of the Romans, and above grammar.”
― Sigismund, Holy Roman Emperor
The things I argue for are not necessarily my own opinion, but rather a different perspective.

Can we get a number on how many imperial incidents there will be? Anything planned for 1700+ ?
Also, will there be an event/incident if a nation not in Germany or Italy becomes emperor (Spain as emperor etc.)
S

First of all, nice work on the HRE layout overhaul; it looks much better!


So far, I don't see any downside in supporting the Hanseatic League. Rejecting support just gives penalties while asking free cities to join the league gives more imperial authority. Will there be factors not shared yet? What option will an AI emperor be inclined to take?

But most of all, I wonder what the incentive for the emperor would be to care in both cases. If peasant republic(s) would become a problem, I think I would just send condotierri to Dithmarchen's enemies or just join a war against them in order for them to get annexed. If released later, Dithmarchen would "respawn" as a regular duchy anyway. (At least that's the situation at the moment)

edit: hypothetical situation: You're playing Brandenburg or the new Pomerania, or whatever tag that can relatively easy take over the Lubeck trade node and become emperor. You'd be able to embargo yourself?


Also; nice teaser about the Burgundian Inheritance. I'm looking forward to it's rework as it feels too random to me at the moment.
Last edited: Apr 14, 2020
Toggle signature
Tryharding games like Europa Universalis 4 in a casual manner.

With more new Tags in this Update, how big is the Hanseatic League in 1444?

I read in a dd before, that there will be "just" 13 incidents - any chance that there is time to add some more?
They are quiet cool in dynamic ways. But as I see the trigger conditions of the incidents shown until now, they will not spawn every campaign. And just 3-4 incidents for a whole run seems quiet few. As well if its just 13 different.
Possible incidents should be enough?

Just some short thoughts that came into my mind right now:

Something about the Fugger, their trade imperium and the State of Augsburg

The last help request of the byzantine empire when ottomans attack

The Forming of a newer midgame tag in the HRE like hannover, swabia or something

An Incident when Austria/Habsburg is also King of Spain

An Incident about the Orders or the State of Danzig

the fate of netherlands when forming

Hunger crisis or leaving people to the colonies (as a lot of germans did) - changes via reforms, let them leave etc.

also the Maria Theresia thing that is right now a decision would be perfect as an incident.

And another Question: Is it possible to have more than 1 incident at a time? or is it scripted that, this can't happen?
Last edited: Apr 16, 2020

There will be Formable Hanseatic league tag in the Emperor?
Or I think giving new name ‘Hanseatic league’ to the country who unites all hanseatic city will be nice too. Like Kingdom of God for pope and Caliphate for muslim in the new update.

Prignitz should be in brandenburg and Uckermark in Vorporrenn. Fix it PDX please.
Toggle signature
My Suggestions:

Muelleri said:
There will be Formable Hanseatic league tag in the Emperor?
Or I think giving new name ‘Hanseatic league’ to the country who unites all hanseatic city will be nice too. Like Kingdom of God for pope and Caliphate for muslim in the new update.
Click to expand...

Sounds nice, but maybe it should work differently at least as you'd currently have to declare war and conquer all cities in your trade league which sort of defeats the purpose.
Last edited: Apr 14, 2020
Toggle signature
Tryharding games like Europa Universalis 4 in a casual manner.