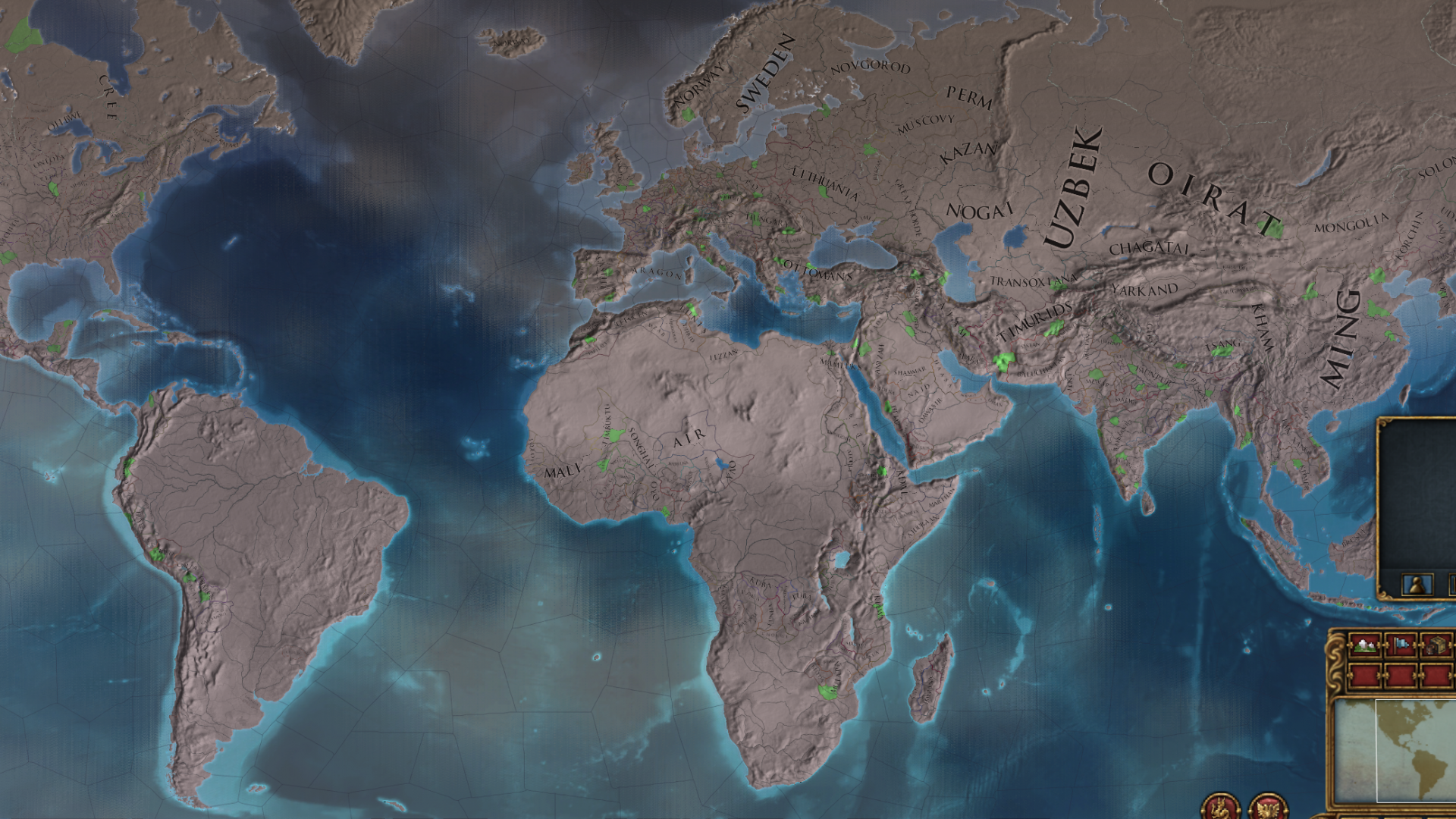 Hello everybody, and welcome! This week we will shift the focus from the upcoming African content, to the new Monuments that we will be introducing for Leviathan DLC owners, and that will come along with the 1.32 patch.

As this has been quite a popular feature of the last DLC, we felt that we could create a few more for the game. And when I say a few, I mean that we’ve almost doubled them, with 52 new monuments being added. So first let’s talk a bit about the creative process and the decisions that we made when choosing which ones we wanted, and then I will be showing some of them (although not all, as that would really be a long post, and we want to surprise you a bit when looking at them for the first time ingame!).

The creative process started a few months ago, just after releasing the new Monuments of 1.31.5 patch. As we pointed out back then, the thing that takes more time about this feature is the Art involved, and because of that you’ve not heard anything about them in a few months. So, we really wanted to choose some beautiful and meaningful buildings to be included.

Apart from that, we also wanted the regional distribution of the Monuments to be a bit fairer, as we felt that some regions were crowded with them, but others were a bit sparse. So here you have a sneak peak of that:

So, where did our inspiration to pick the new ones come from? First we incorporated the ones that were voted for in the forum around May; so, Cahokia, Malbork Castle, Brandenburg Gate, Santa Maria del Fiore, Bran Castle, the Rock-Hewn Churches of Lalibela, the Great Living Chola Temples, Porcelain Tower of Nanjing and Nan Madoll are in.

Then, we had been gathering suggestions from the community here in the forums, in the Monuments-specific threads. We have to thank you all for the passion you showed, as we had a long-list of around 100 Monuments to pick from, and that was a great inspiration for us. Last, but not least, we checked a lot of different places from the UNESCO World Heritage list.

Now let’s go to the cool part of the DD, and let me show you some of the new Monuments.

[Disclaimer: modifiers are currently being tested by us and our QA, so expect changes on them when 1.32 patch is released.]

First one we want to show you is in the Americas: the Qhapaq Ñam, portraying the famous Incan Road System. Although we brainstormed a bit about how we could do this without being attached to only one province, we thought that it would be a bit difficult to do, and we wanted to be coherent with the other monuments, which are located in only one province. Anyway, we represented this as a buff for an united Andean Empire, and because of that it’s on the most northern tag of the region. If you notice the last modifier, it is a new one affecting Yearly Inti Authority (there's a word lacking there to be fixed, yes!), so we think it’s a nice buff for the main religion in the region: 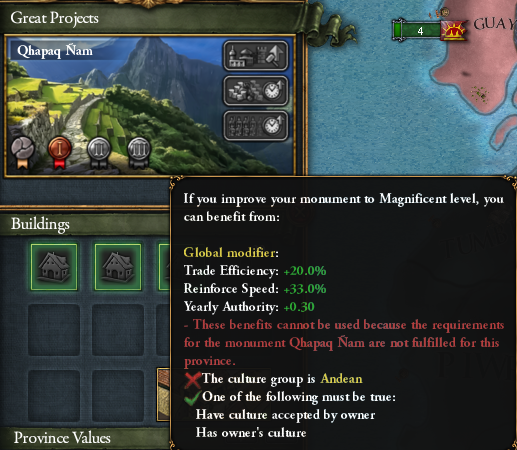 Next one is Santa Maria del Fiore, one widely requested by the community, and one that we obviously think should be included, as being so Stendhal-esque! We took the opportunity to add a nice modifier to it, so here you have this Monthly Splendor modifier that we think fits perfectly with it: 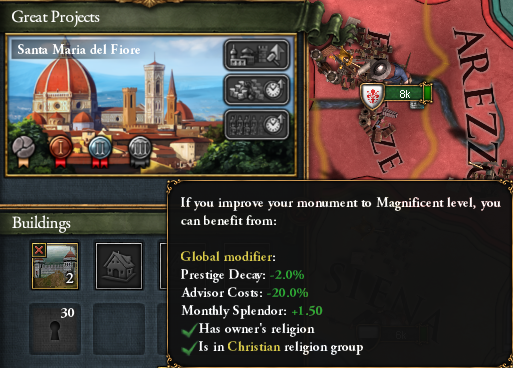 Now let’s move to Africa. It was obvious for us that some new Monuments had to be added to the region we’re focusing on for the next Immersion Pack, and make them useful with the new content we’ve been designing. So here you’ve got the famous Rock-Hewn Churches at Lalibela, that gives some extra flavour when playing as Ethiopia, as it’s our first Coptic-related Monument. And I’ll give you some extra info, not directly related with today’s DD, but with this area: yes, we will have some new mechanics for Judaism! But those will be revealed in a couple weeks. 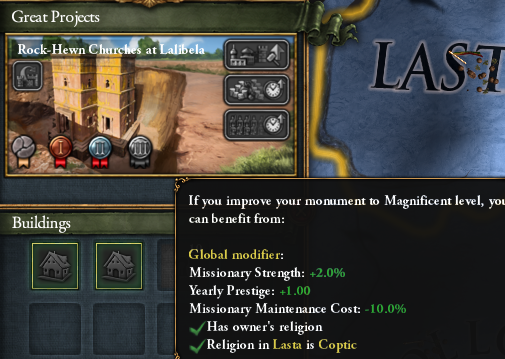 Let’s go now to Asia. Here we’ve added a bunch of monuments to India, as we felt this subcontinent to be a bit empty of Monuments in comparison to other regions. One of those is Hampi, the renowned capital of Vijayanagar, that grew as a really princely city (until being razed by the Bahmani Empire, of course…). So, here we’ve got a couple of interesting things to show. First is the new ‘All Estates’ Loyalty Equilibrium’, that now will make our lives (and modders’ ones!) easier, as we can add this loyalty equilibrium modifier to all the existing estates in our country. The other thing is that we added a couple new requirements for Buddhist Monuments, so now they can be used also by Hindu countries with a ruler following the Buddha cult, or by Fetishist ones that follow Buddhadharma. [Obviously the Hindu Buddha cult is redundant in this Monument, as it can be used by Dharmic religion groups, but we wanted to show this fix we’ve done in this pic.] 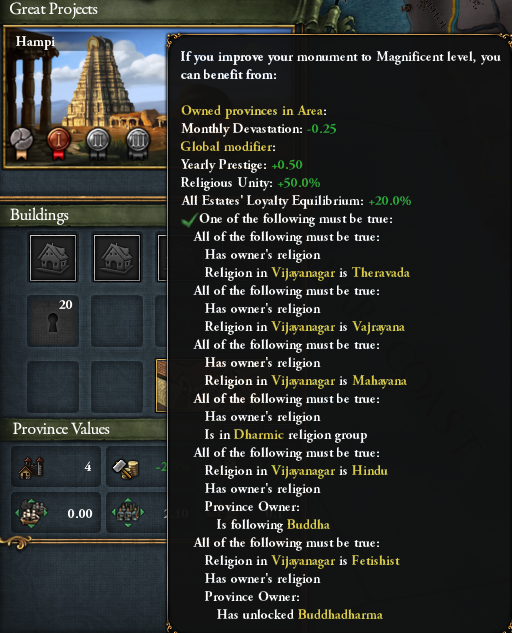 To end with the Oceania continent, we’ve added here its second monument, the settlement of Nan Madoll. We wanted this to work as a kind of race prize and reward for colonizing the Pacific islands, so because of that the nice modifiers for colonization, coupled with the Yearly Navy Tradition one.

That’s mostly all for today! Because I want to make a last announcement: Paradox Tinto will be joining the Grandest Lan event with a Dev (Dream) Team! Probably we will be beaten badly by everyone else in the game, but at least it will probably be fun.

Next week we will come back to the new African content, and my colleague @Ogele will be talking about Mutapa and Kilwa new missions, among other things. I’ll be reading your feedback along this week, see you!
Reactions:

Does the first screenshot mean that there will be a Great Projects mapmode coming?
Reactions:

What is the monument in Oirat? I can't think of anything that would really fit up there in 1444
Reactions:

Any chance you could drop a hint as to what it is and what effects it has?
Toggle signature
Vaximillian said:
but the Polynesians bro
Reactions:
M

Can you say something about Malbork Castle, Brandenburg Gate?
Hope they negate the impact of the -50% government capacity for prussian government, because this is already exhausted with all german provinces
Reactions:
A

There will be list of bonuses of Monuments to analize?
Reactions:
O

Oh, look: Saint-Petersbourg will get one at last!
Reactions:
O

It's already in the game. 3rd from bottom of the geographical mapmodes list.
Reactions:

Yai - 52 new Monuments sounds great, even if I think from the distribution that there is one missing in nothern germany like the holstein tor of lubeck.

Anyway - the biggest problems of monuments haven't been adressed in this DD, to make monuments actually work.

My thoughts about a better use of monuments, especially for newer players. All this things could be achieved easy and I donˋt understand, how they are not already done.

With this 3 simple requests I think monuments are way more easy to understand and handle for newer players and older ones as well. I played over 2000 hours of EUIV and I often forget about the possibility that I have a monument or I could get one.

The 4. Request is a balance one – if I can relocate a monument with religious believe as condition to another province (as the Europeans did in colonization with a lot of “artefacts” more then with “real” monuments) it should have a different effect as it would have for the nation/religion it has been taken from. The use for science, culture or simply entertaining was different – so there should be a different effect. This should apply also for almost every other religion or culture locked monument effect – while the conquering of the monument donˋt need to have big buffs (but maybe for some monuments little buffs) like it would have with the same religion/culture, it should have at least some impact. Manly I think a get simple +5 Prestige event (or smth.) with the info that we conquered that monument from that country etc. would be really immersive for the player and it wouldnˋt feel, that the player conquered an important province from another country, but nobody gives a damn (I think the smaragd Buddah is nice event in that regard, ofc, the event would just fire by taking the province in a peace deal).
Reactions:
H

There already is a Great Projects Map Mode.

Love the inclussion of the ethiopian one, looking forward the next reveals!
Toggle signature
#ReviveImperatorRome #pls
Reactions:

I haven't felt this elated by a dev diary in ages.
Toggle signature
Vaximillian said:
but the Polynesians bro
Reactions:
M

That’s nice coverage alround! Happy to see what is likely Sankore and the Benin earthworks added to West Africa. And a Monument in my homecountry (is it the Amsterdam City Hall, or just the Land Reclamations in general?)

But above all I’m gladly surprised that this will be free content for Leviathan owners and not one of the classic Paradox ‘you paid for a new mechanic, half implemented, now pay us more to round it out’ manoeuvres. Well done Tinto!
Reactions:

Wow, those are a lot of monuments.

Now I don't mind surprises all that much, but I'd hate to see the new monuments get released and there's one among many that's blatantly overpowered, and then we don't see a patch for months on end. For example, see original Alhambra monument.

Do you have some kind of balance roadmap or how do you want to go forward with balancing these.

Anyway, great work. Love to play with them. Would love to see them expanded upon (events, ideasets that incorporate them, ...) as well.
Last edited: Oct 13, 2021
Reactions:

some of this monuments are stronger than entire idea groups, would it be possible to have the player decide which monuments to activate instead of having all those related to their culture and religion?

Something like a button called "Mark as core monument" where you can only have like 2 or 3 core monuments at the same time, and those are the only that gives you bonuses
Reactions:

It already exists though?
Reactions:

Wow, Hungary went from zero monuments to two starting ones. One of the first things I noticed

The Coptic monument isn't that strong but it's a religion specific monument (not religious group like jerusalem or alhambra) so I don't mind.
Reactions: