Welcome once more to another Tuesday development diary. This week I’m going to focus on content for the nations of the Maghreb, but I’ll also revisit Catholic Iberia towards the end. 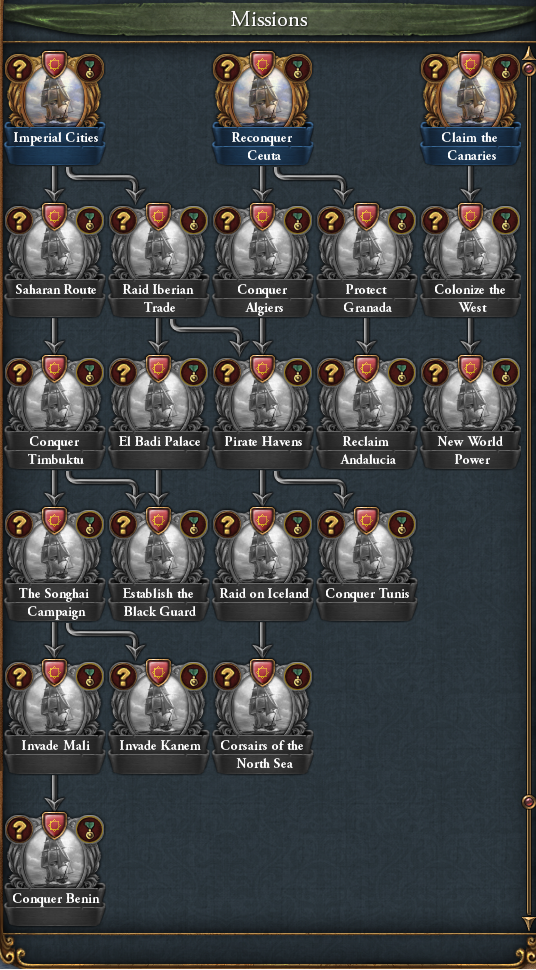 Morocco’s mission tree leads the player on a military adventure across the world; you’ll lead your armies across the coast of the Maghreb, through the Sahara desert and into the rich empires of West Africa. The player now has much more agency over Morocco’s expansion southwards, with the Sudanese Expedition event now being tied to completing the ‘Saharan Route’ mission. Establishing a foothold in West Africa and establishing a new palace built with Portuguese ransom money will grant the powerful Black Guard modifier, giving Morocco +2.5% discipline for the rest of the game. Plundering the riches of Mali will also net you an impressive haul of gold to add to your treasury.

Looking northwards, Morocco must also sponsor pirates against the Iberian powers, and lead a raiding expedition to Iceland and beyond. Morocco will also be encouraged to create an overseas empire, focusing on Brazil, Colombia, and the Caribbean.

At long last, Morocco has a set of national ideas of its very own: 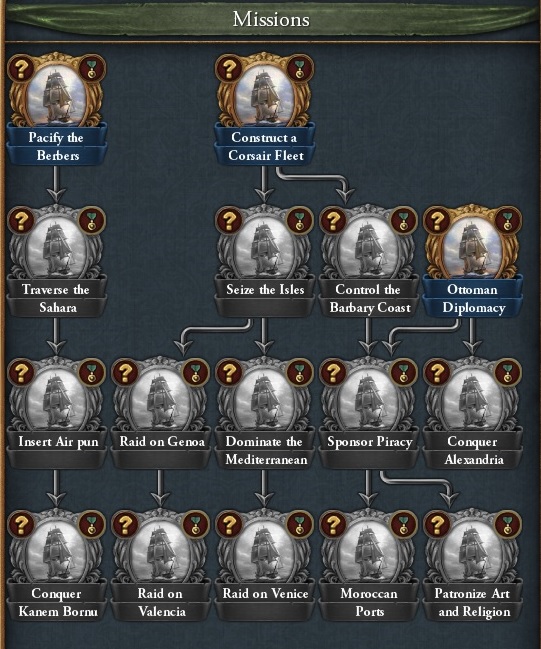 Tunis’ mission tree is somewhat pirate-themed. They will be encouraged to be the menace of the Mediterranean, occupying its islands and using them as a base to plunder the wealthy ports of Venice, Genoa, and Valencia. Establishing a sufficiently powerful privateering base on the Barbary Coast will attract the attention of one Hayreddin Barbarossa, who may come offering his services rather than as a conqueror.

Like Morocco, Tunis will also have greater control over its southward expansion. They must pacify the Berber tribes and seize control of the Saharan trade in order to open a path of conquest to West Africa.

Tunis too has earned its own national ideas: 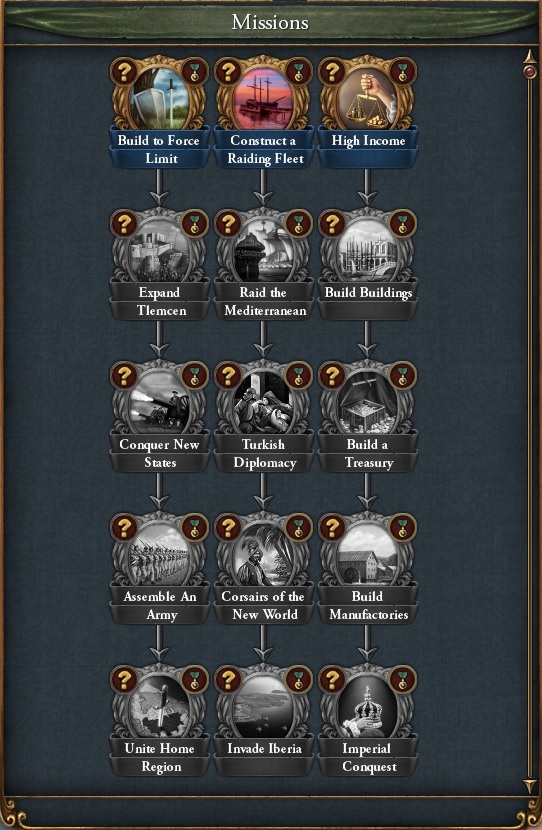 We’ve loosened the requirements for forming Morocco and Tunis, which will make these mission trees more accessible to other nations in the region. We’ve also replaced some of the generic missions for Maghrebi nations, seen above. These missions will be free in the 1.28 ‘Spain’ update and available to all Maghrebi nations without unique missions.

Here we have the mission tree for Granada and Andalusia, the White Phoenix. These missions are available in a reduced form for Granada, and for any nation that forms Andalucia.

Granada has a very difficult start; not only eyed hungrily by the Iberians, especially Castile, they must now contend with a looming disaster; in the Granadan War of Succession Yusuf V will attempt to seize the throne from the incompetent Sultan Muhammad IX of the Nasrid dynasty. Granada’s early missions will guide them through the difficult first years of the game.

If by some miracle you manage to secure Granada as a true regional power and restore the great Sultanate of Andalusia, the mission tree will expand significantly to reveal new paths of conquest and exploration. Along the way you’ll restore the Emirate of Sicily, restore the Great Mosque of Isbiliya, and beat back Christina rule all the way to France. Conquering the former Fatimid realm of Egypt will grant the opportunity to move the capital to Egypt and convert to the Shia faith, while exploring Africa and the New World will grant colonial bonuses as well the conquistador Mustafa Azemmouri, one of the few historical survivors of the doomed Narváez expedition.

And here's an idea set for Andalusia: 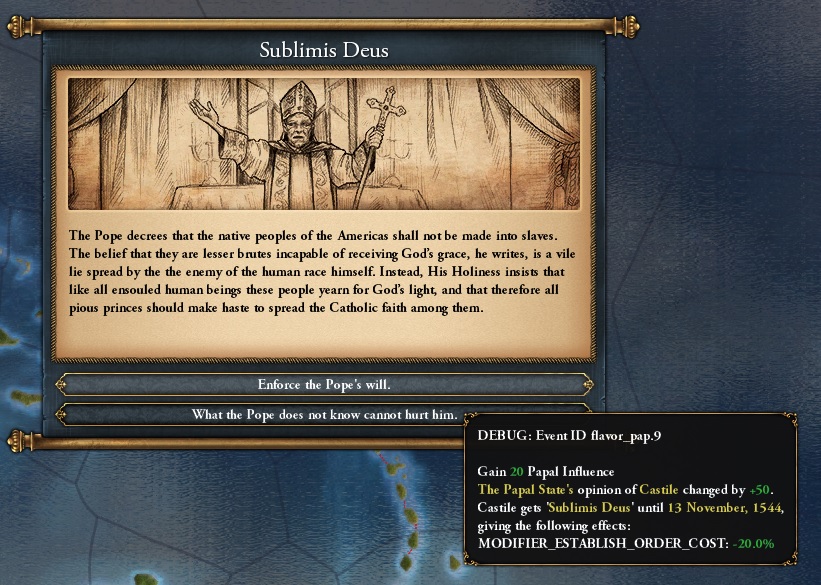 We’ve revisited the national ideas of the Iberian nations following feedback and internal testing. The revised Castilian and Spanish ideas are displayed below:

In addition, the following changes have been made to Navarra, Aragon, and the Berber group:


Code:
Lastly, just for fun here’s a set of national ideas for the great nation of Texas:

Note from Groogy
So since bunch of people asked what Artillery Fire is, instead of answering every individual instance of where someone asked that I'm putting a summary here. The important part you need to know, it makes all cannons go more boom boom and make more damage.

Artillery Fire is a modifier that previously was only exclusive to tech. In fact all of the various tech weapon values are now available to the modifier system. The weapon technology value is part of the casualties equation and is applied multiplicatively. Very TL;DR and skipping some parts for the land combat formula is something like:


Code:
Where Weapon technology is where the Artillery Fire goes in if the regiment is artillery and it is in fact fire phase. Artillery Fire is a bit special because it is also used in naval combat, regardless of if it is shock phase or fire phase.
Last edited: Nov 13, 2018

Will perhaps Spain by ruled by queens called Christina at the start of the game?
Toggle signature
Check out my WIP mod Europa Magnifica, which will add thousands of new provinces and rulers: https://discord.gg/B3NUR6Zv

No changes to Portugal? If not, please check the last DD thread, they were requested as much as the readdressing of Spanish ideas.

Also is something wrong with Tunis' missions? I think you guys forgot to add its flag to its unique missions

Looking forward to it.. Do we have a release date yet?
R

Is it possible to modifier unit pipes too?
i would like to have a way to buff as specfic as "infantry melee moral defense"

It's Tariff efficiency, so it increased the amount of money you get out of what the colony pays.
Toggle signature
That'd be Groogy. He's kinda like the King Joffrey of these forums, toying with us for his own sick amusement. - DominusNovus
The Groogy is an elusive and magical creature. You do not find the Groogy, the Groogy finds you. - Enlil
I thought he was just created in a lab - Viking

Will Andalusia idea set be switchable to upon formation? It is not currently.
Toggle signature
Tallest espionage manchu you've ever seen

dav77-b said:
Is it possible to modifier unit pipes too?
i would like to have a way to buff as specfic as "infantry melee moral defense"
Click to expand...

Interesting but quite a bit harder to do
Toggle signature
That'd be Groogy. He's kinda like the King Joffrey of these forums, toying with us for his own sick amusement. - DominusNovus
The Groogy is an elusive and magical creature. You do not find the Groogy, the Groogy finds you. - Enlil
I thought he was just created in a lab - Viking

rimworld inbox said:
Will Andalusia idea set be switchable to upon formation? It is not currently.
Click to expand...

I really like the love for Granada/Andalusia! Looking forward to a campaign with them!
C

Yay, some of my ideas for Texas were used!
Thanks!

Morocco having galley combat bonus is strange considering most of their starting coast is in the Atlantic.

It might not be that useful to them, especially considering where their mission tree takes them.^

Are there any plans to add impassable mountain ranges to Iberia (as was the case with CK2 Holy Fury)?

So will Tunisia get a natural tendency to shift towards legalism, then?
Toggle signature
My suggestions: Improving the Galactic Empire

Very good to see some love for the Maghreb finally! Also nice to have some more flavour to Granada.

Still waiting on Portuguese ideas though
Toggle signature
EU4: Give me 1.29 "Portugal" patch or give me death

I speak Spanish to God,
Italian to women,
French to men,
and German to my horse.
Charles V

I love you, finally the well deserved love for the last jewel of al-andalus. + I love the Andalusian idea group.