Hello and Welcome to another development diary for Europa Universalis IV. Today we’ll talk a bit about the future of the game, and what we aim at achieving with it.

It is now almost three years since we released EU4, and the game is growing every month, with far more people playing it today, than ever before. And as we have said before, we’ll continue to support the game with patches and expansions as long as you keep buying them.

Currently we have ideas and designs for several years worth of expansions, but those designs change and grow whenever we read your feedback.

There are of course concerns and challenges with expanding to an already complex game, and what can be added without making the game unplayable. It is also a fine thread to decide which ones should be behind the paywall and which should be free.

While a fair amount of requests keep coming for more peace activities, that also creates challenges, as if that is too engaging, you will suffer when you end up in unplanned wars, and get a far worse experience.

So what do we want to do with EU4 in the future?

Well, there are some parts of the world we want to add more unique flavor to. I am fairly happy with Europe, and we’ve done quite a lot of focus on mechanics for the New World, but there are areas like East Asia, India & Middle East which deserve far deeper looks in the future. With unique flavor I mean things like Dutch Republic, Nahuatl Religion, Polish Elective Monarchy, HRE Religious League Wars, Hordes Razing Provinces, etc… I envision EU4 in 3 years with far far more difference playing each country in the world.

There are also aspects of the game which we once were happy with, but feel would require are not entirely happy with now. Our technology system, basically hailing from EU1, is based too much around rigid tech groups, punishing nations outside of Europe. We’re not entirely happy with how culture works now, and the diplomatic interface just can’t handle the amount of states and actions we currently have. Can these be changed? Maybe? Time will tell.

Here's a screenshot of something you've never seen before. 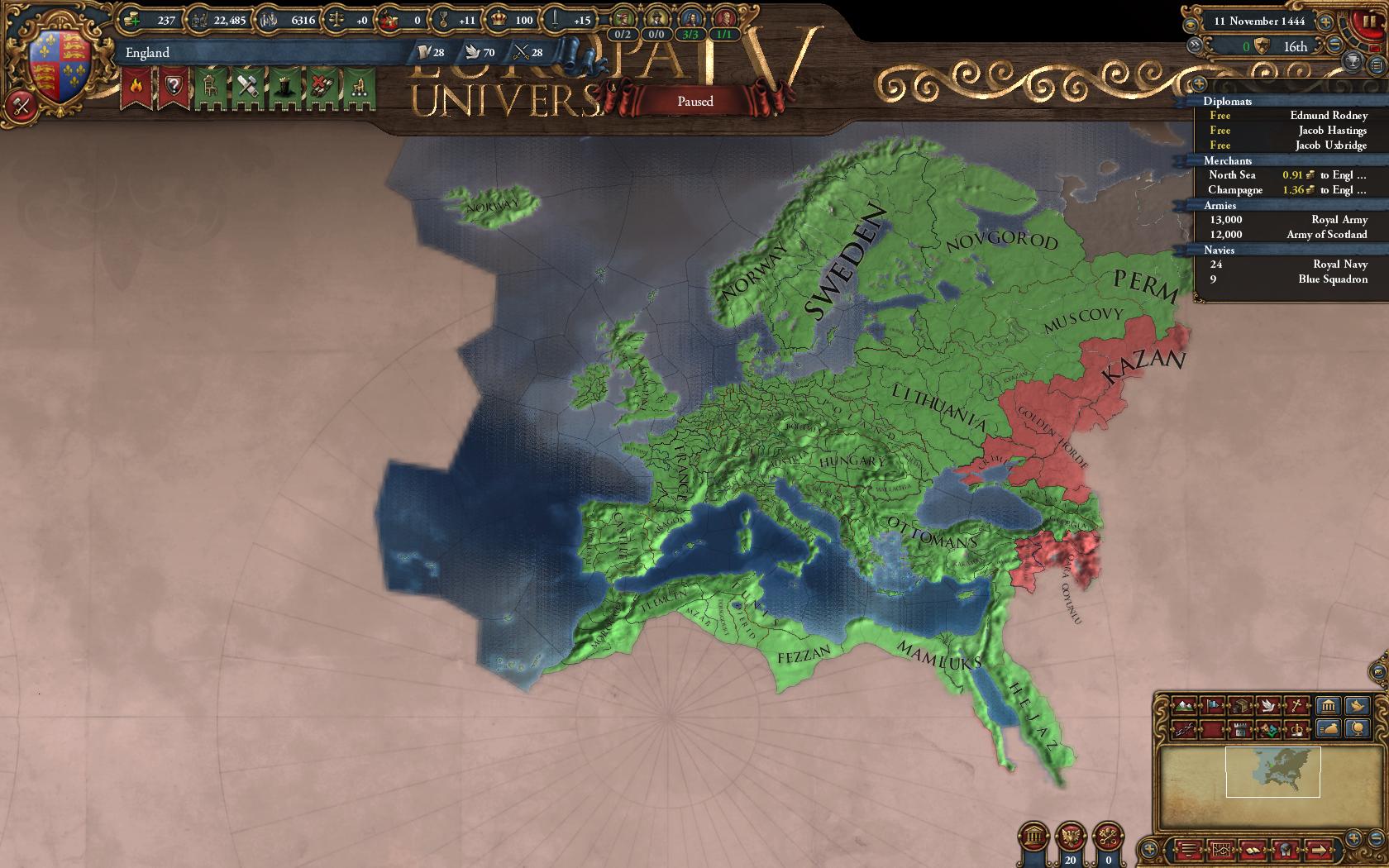 Anyway, next week I’m gone on holidays, but Catalack will talk about units for eu4.
Reactions:

dlc about caliphate mechanics would be good.
Reactions:

What am I seeing?
Reactions:

government (tech) types? red ones are hordes others not.
Last edited: May 12, 2016
Reactions:

Looks like a map of nomad tech group nations to me.
Reactions:

A maximum diplomatic range? Feels kind of redundant, TI already does that.
Reactions:

I find myself pretty excited about next week.

I need to know what that screenshot is !
Toggle signature
Hippity-hoppity your land is now my property
Map of monuments: https://eu4.paradoxwikis.com/images...onuments.png/1920px-Location_of_Monuments.png
Development mapmode change: https://forum.paradoxplaza.com/forum/threads/change-the-development-mapmode-colours.1470596/
Reactions:

Johan said:
Well, there are some parts of the world we want to add more unique flavor to.
Click to expand...

Talking about flavor, can you tell us if we will have african event pictures soon?
Reactions:

Is that the aftermath of a new "let's gang up on the hordes" CB?
Toggle signature
My YouTube channel (inactive)
Reactions:

Johan said:
While a fair amount of requests keep coming for more peace activities, that also creates challenges, as if that is too engaging, you will suffer when you end up in unplanned wars, and get a far worse experience.
Click to expand...

Don't worry, we can handle additional peace time activates, if we could handle Vicy2.
Toggle signature
"I certify to you that, with the help of God, we shall powerfully enter into your country
and shall make war against you in all ways and manners that we can, and shall subject you
to the yoke and obedience of the Church and of Their Highnesses. We shall take you and
your wives and your children, and shall make slaves of them, and as such shall sell and
dispose of them as Their Highnesses may command. And we shall take your goods, and shall
do you all the mischief and damage that we can, as to vassals who do not obey and refuse
to receive their lord and resist and contradict him."
Reactions:

Johan said:
I envision EU4 in 3 years with far far more difference playing each country in the world.
Click to expand...

This makes me think will their ever be an EU5 ? is EU4 the ultimate end game in terms of development of the series? I love the EU series and will always continue to play. But im not sure how willing i will be in the future to plow more money into a game that will be ~6 years old judging by this.

Anyway im not wanting to come across salty and I am looking forward to any updates in the near future with bated breath
Reactions:

Map: My guess is on technology.
Toggle signature
"There is no such thing as an unbiased argument - indeed, facts support bias', or else they wouldn't exist." - Grand Historian

The map is areas where aliens have abducted people for experiments #StellarisHellYeah
Reactions:

It can't be that. The states under the mamluks are red too (Under the Terra Incognita) They aren't hordes afaik.
Toggle signature
2D Art - Mesoamerica Universalis
https://forum.paradoxplaza.com/forum/index.php?threads/mod-mesoamerica-universalis.970935/
http://steamcommunity.com/sharedfiles/filedetails/?id=861977085​
Reactions:
P

Johan said:
Here's a screenshot of something you've never seen before.