Let’s talk about Germany. Before I begin, I’d like you all to spare a few minutes to examine the image below: 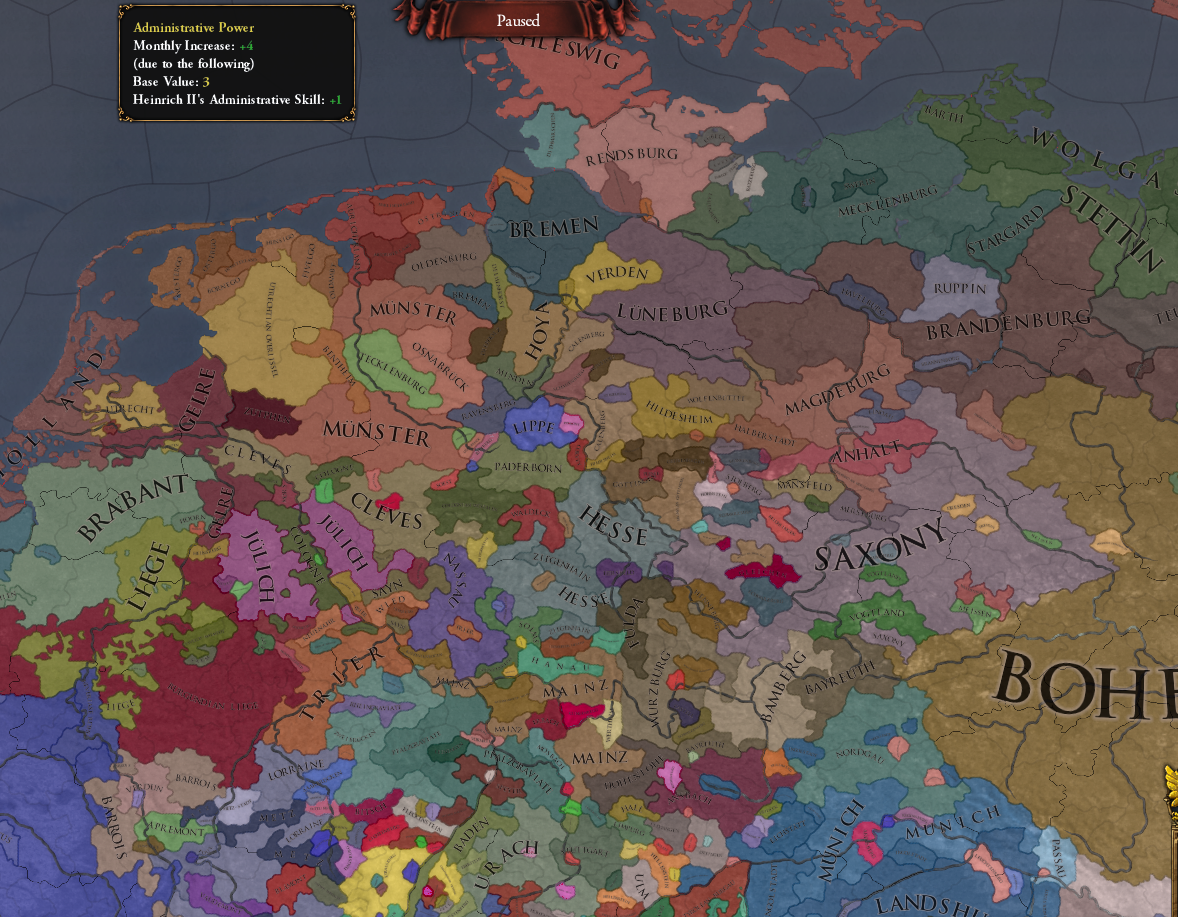 As you may be aware this is a screenshot of the glorious, beautiful, and ambitious EU4 mod ‘Voltaire’s Nightmare’. I’d like to assure you all that we are not going to implement this or anything like this in vanilla EU4.

So what are we going to do? Well for one thing we’re going to continue to rely on abstractions such as the existence of a country called “Switzerland” in 1444 rather than a multitude of semi-independent cantons. “Accuracy”, beyond a certain point, ceases to be relevant or else Voltaire’s Nightmare becomes the standard. Good design, rather than “accuracy”, is what should guide us here.

On that note, I’ve devised a few design guidelines that will advise the way we plan out the region, some of which I’ll share with you now. Bear in mind that these are guidelines and not hard rules; there will likely be the occasional exception.
I’ll skip the nostalgic retrospective today and get right into the gritty details. Let’s take a look at southern Germany:

Bavaria is looking rather monolithic in 1.28, but it was not so historically. Divided between several Duchies most notably based in Munich, Landshut, and Ingolstadt, the Wittelsbach dynasty is at odds with itself in 1444. Bavaria wouldn’t be united until 1503, when Albrecht IV instituted primogeniture. There were also other independent polities in Bavaria such as the Bishopric of Passau and the Free City of Regensburg. We’re going to have to decide how many Bavarian states are going to exist in 1444, but we are determined for the answer to be “more”. Overall the region’s total development seems a little lackluster compared to the likes of Austria and Bohemia, so expect to see it boosted by comparison.

Looking to the west, there is the potential for more Free Cities in Swabia, as well as splitting the large province of Wurttemberg. Switzerland is trickier. We certainly don’t want to represent each province as a nation, but the fact is that the Swiss Confederacy wasn’t as large in 1444 as we currently present it. Graubünden for instance, later unified under the Three Leagues, had yet to be incorporated. We certainly want to add a province, and very possibly also a tag, for the city of Geneva. Geneva in 1444 was a somewhat unwilling subject of Savoy, and would eventually secure its liberation through entry into the Swiss Confederacy. We're also thinking about how we want to represent that rather unique "government" of the Confederacy, but more on that much later. The passes through the Alps could also use some work; we feel that there ought to be a connection between Savoia and Piedmont, while the pass between Piedmont and Wallis seems less necessary. 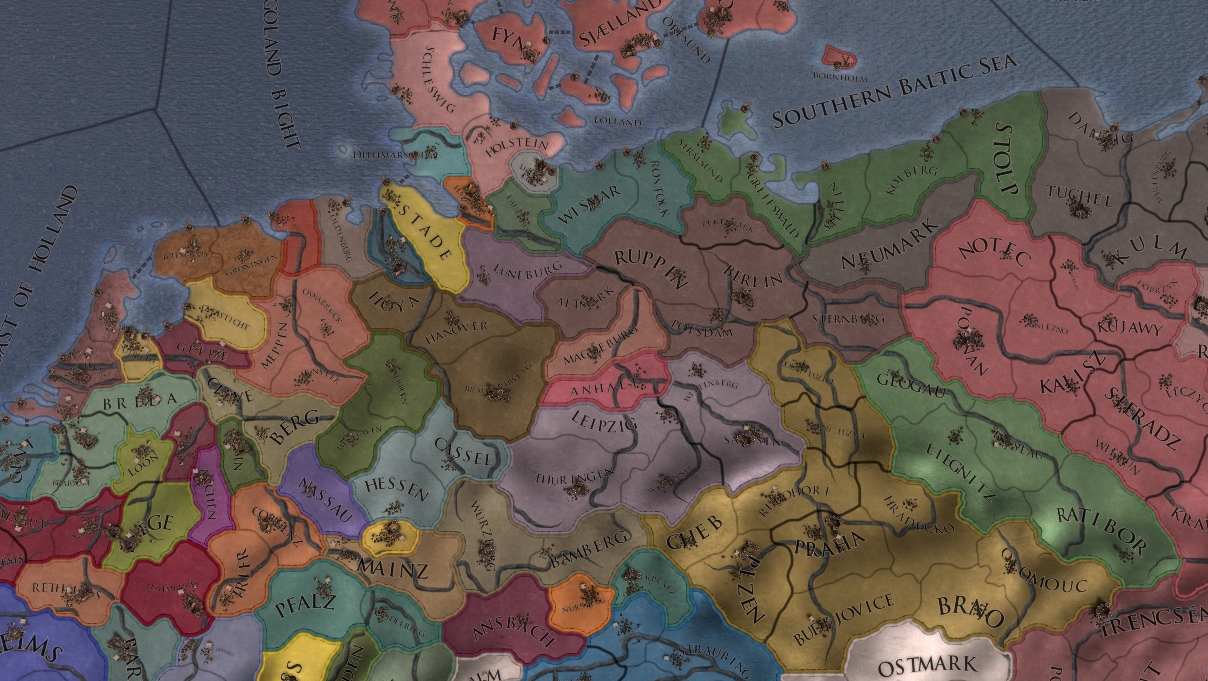 And here’s northern Germany. As I noted in my design guidelines, there’s a temptation to overboard splitting up e.g. Saxony and Brunswick into many small duchies. In this region I think we should resist this urge for the sake of maintaining a mix of countries of different power levels within the HRE. Saxony for instance shall likely remain united. There are however candidates for splitting and potential new tags that could be added to the region. Pomerania and Silesia are both good candidates for division. Luneburg, Verden, and Magdeburg could potentially be elevated from OPM status. New OPM’s such as the Free City of Nordhausen are also possibilities. We’ll be carefully considering which provinces and countries merit inclusion and how they each fit into our overall goals for the region.

Moving on to the Low Countries, this is a region that has seen a lot of iteration over the course of EU4’s history. There is very little that can still be done without over-inflating its province density and risking an excessive reduction in the development of each province. That said, some changes we’re considering include an additional province in Flanders, splitting up Brabant, and adding the province of Julich (though we’re not quite sure how Julich is going to work). The Friesland/Utrecht border is something often complained about and will likely be revised in some way, though the solution probably will not be to add a new province. I’ve also seen suggestions for adding Frisian culture along parts of the coast, which is something we’re considering.

I hope that I’ve been able to give you some insight into the way we think about map changes, and once again I look forward to hearing your thoughts on Germany and the HRE. This concludes our series of dev diaries on the upcoming map changes. Next week you’ll be hearing from me again, but this time on the subject of mission trees.
Last edited: Mar 12, 2019

neondt said:
I’d like to assure you all that we are not going to implement this or anything like this in vanilla EU4.
Click to expand...

The province density of Voltaire's Nightmare should just be extended to the whole world, Antarctica included #MoreProvincesIsBetter
Toggle signature
"History is on the move, Captain. Those who cannot keep up will be left behind, to watch from a distance. And those who stand in our way will not watch at all." Grand Admiral Thrawn, to Captain Gilad Pellaeon

neondt said:
The passes through the Alps could also use some work; we feel that there ought to be a connection between Savoia and Piedmont, while the pass between Piedmont and Wallis seems less necessary.
Click to expand...

finally a confirmation that they will do something about the borders in the HRE.

Well while they are at it, let's hope that they fix annoying stuff like not being able to use vassals in the HRE because they will return unlawfully territory with out asking there overlord

Good to get a clearer idea of what the Devs intend, though the level of splintering of the HRE seems to be rather limited frankly. The more tags the better in my view. (Within reason) Also Zurich releasable/tag when?
Last edited: Mar 12, 2019
Toggle signature
My Suggestions for Improving League Wars: https://forum.paradoxplaza.com/forum/index.php?threads/reworking-league-wars.1058893/

Nice DD, I agree that too many provinces might get tricky from adesign perspective but I can't feel too sad about missed opportunities. As for suggestions, I think the Bishopric of Minden would be an interesting addition to the Northern German landscape, albeit one that is somewhat hard to fit in.

Also, maybe some of the tags that - further down the line in your decision making process - barely didn't make the cut to be on the 1444 map can be added as Revolter tags? This could be a nice compomise to please people and add some more flavor to the region overall.

Verden and Magdeburg are almost impossible to split in such a way that the tag itself controls more provinces. Stade should be split to incorporate a whole new tag, not to be given to Verden.

Mainz is the one OPM that needs more provinces the most; Erfurt anyone?

Anyway, I hope the developers take a good in-depth look at the HRE-thread that was made.

Anyway, curious but also slightly concerned about what we'll see. A good HRE-rework would be future-proof, a bad one with half-measures not.
Toggle signature
Fighting for a good map since 1444.

No draft designs to visualize?

How about tweaking polish provinces so we could again have pretty borders of German Empire in the east. After polish patch its no longer possible and I think it hurts group if people aiming for nore historical or just good looking borders

neondt said:
That said, some changes we’re considering include an additional province in Flanders, splitting up Brabant, and adding the province of Julich (though we’re not quite sure how Julich is going to work). The Friesland/Utrecht border is something often complained about and will likely be revised in some way, though the solution probably will not be to add a new province
Click to expand...

Brabant is quite a small province to split up. Will you consider splitting up the Breda province into The Baronie of Breda and the Meierij of Den Bosch?

What exactly is the problem with the Friesland/Utrecht border? Are you refering to Drenthe being part of Friesland in 1444? Because after the formation of the Netherlands it was ruled from Groningen, so for the whole EU4 timeline I think the current border are perfectly fine.
Last edited: Mar 12, 2019
M

Since you will divide Bavaria,can you stil form Bavaria by decision after game start as one of these Bavarian States or not?
Thanks.
Cordially.
L

Adding more Free Cities in northern Germany sounds good But instead of Nordhausen I would suggest Goslar, since it was richer and more significant and would fit perfectly on the map. More details as well as all the necessary game data can be found here:

More OPMs please-and ideas for all of them!

Never let a day go by without Ulm having ideas!

Austria gets wrecked too many times in my games, they're redundant in Eu4 Today. They werent historically.
Slight buff should be in order.

With buff. Im thinking either buff their starting development just a tiny bit or give the starting monarch one or two more monarch points.

Pomerania was split among many dukes, so was Brunswick, so were the Habsburgs. You have to draw a line here.

Saxony-Thuringia should definitely be looked at. As well as the Mainzian holdings there.

Regensburg was a de-jure vassal of the Bavarian duke, on scutage (annual payments).

Albrecht instituted primogeniture on the 8th of july 1506.

Austria should definitely get more love. It hasn't even received a mention or a new province since vanilla.
Toggle signature
Fighting for a good map since 1444.

What about Austria? Will it receive an event to release Styria in 1453?
Toggle signature
Suggestions:

Any chance to split Ansbach and add Rothenburg ob der Tauber? It would be adding a new tag, but Ansbach is one of the bigger provinces (Württemberg was mentioned as well) and it would also be a free imperial city.
Being born and raised in Rothenburg, I might be a bit biased here though

Could please we see a rework of Dutch Revolts and Burgundian Succession future?

Also please a revisit of Iberia regarding the map, missions (kinda unambitious and meh) and Portuguese NIs, as well as a touch up of Poland is needed.

Other than that, kinda interested in seeing what map changes will end up making it.
Toggle signature
My ideas for improving Byzantine missions

Suggestions for minor improvements to colonies and Tordesillas

Rudolf Nechvile II said:
Could please we see a rework of Dutch Revolts
Click to expand...