Menu
Install the app
You are using an out of date browser. It may not display this or other websites correctly.
You should upgrade or use an alternative browser.
Europa Universalis IV 76277 EUIV: Suggestions 16297 EUIV: Technical Support 5817 EUIV: FAQ & Strategy Guides 194 EUIV: AAR's, Let's Plays, and Fan Fiction EU IV: Alternate History Short Story Contest Contr 26
Showing developer posts only. Show all posts in this thread.
Show all posts

Good morning! In today’s dev diary we’ll be taking a look at three nations in Maritime South-East Asia: the Sultanates of Brunei, Malacca, and Aceh. Each of these nations founded successful empires during our period, and each has a unique set of national ideas and missions. 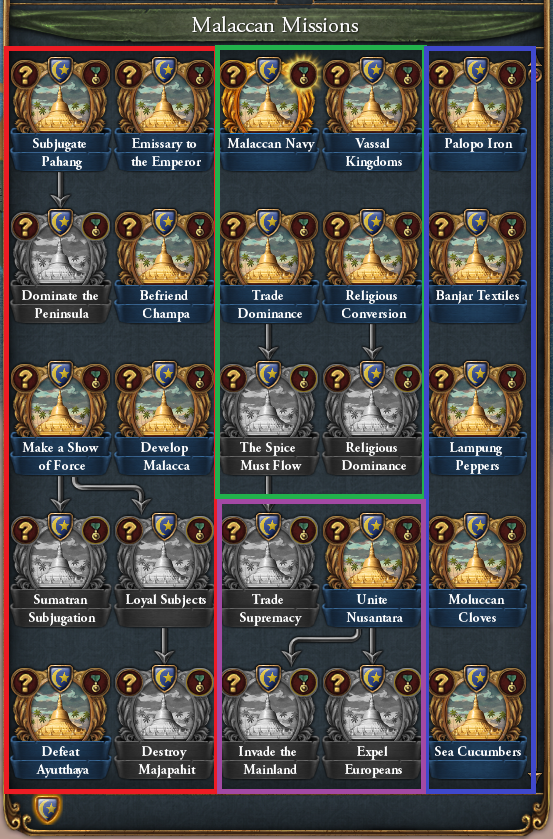 Mission trees for Malay nations other than Majapahit are split into 4 sections. In red are missions unique to that country, in this case Malacca. In green and blue are missions available to all Malay nations, and in purple are missions available only after forming Malaya.
The Malacca Sultanate is a descendent of the Srivijaya Kingdom which dominated Java, Sumatra, and the Malay Peninsula prior to the rise of Majapahit. Malacca won the favor of Ming China during the period of Zheng He’s voyages, which set the rising city-state up to be a serious contender to Majapahit’s hegemony. By 1444 Malacca is the richest city-state in the Malay world due to its maritime control over the straits. Malacca would go on expand further on the Malay Peninsula and even onto Sumatra, before ultimately succumbing to Portuguese invasion in 1511.

Malaccan national ideas allow them to truly dominate the spice trade and get the most out of their vassals.

The Aceh Sultanate wouldn’t reach its apex until the reign of Iskandar Muda in 1583, but it’s available to play from 1444. Aceh’s missions and national ideas are also available to neighboring Pasai, which was richer and more dominant in our start date. Iskandar Muda’s conquests would gain Aceh an empire spanning most of the Sumatran coast as well as parts of the Malay Peninsula. Perhaps the most important contribution of the Aceh region to history is its status as the Porch of Mecca, the most prominent hub of Islam in Maritime SEA.

Aceh’s mission tree follows their historical conquests of Sumatra and the Malay Peninsula, but more interestingly it also encourages the player to spread Islam across the region. Some highlights:

Brunei is a renegade Sultanate, breaking away from Majapahit rule while also avoiding an uncomfortably close relationship with Ming China. The Bruneian Empire would grow to encompass the entire coast of Borneo as well as parts of the Philippines, and was able to resist repeated attempts at European domination long after many of its peers had fallen.

Brunei’s missions lead them to unite Borneo under their rule, and also on a campaign of conquest in the Philippines. The missions Impress Manilla and Impress Sulu vassalize those nations if you can maintain good relations with them, regardless of whether they’d normally accept vassalization. Many of Brunei’s missions also add a province modifier to uncolonized provinces that make them much faster to colonize, hastening their unification of the islands.

One last thing for today - last week I showed off some new Estate Privileges, but there is one I didn’t show that is exclusive to countries with their capital in the Malaya region. The Orang Laut were (and still are) groups of maritime nomads who extensively engaged in trade with the Malay kingdoms. They were often employed to divert trade to certain ports and to deter pirates, and would grant their allies lands and titles on the islands within their domain. This is in fact how the Malacca Sultanate got its start - Seri Teri Buana, a Srivijayan prince, was granted the small Kingdom of Singapura (modern Singapore) by the Orang Laut, a polity which would eventually become the Malacca Sultanate. Malacca begins with the Orang Laut Alliances estate privilege.

And that’s all for this week! Next week’s dev diary will be a focus on Vietnam, including the new mission trees for Dai Viet and Champa.
Last edited: Aug 11, 2020
Toggle signature
EU4 Content Designer
Reactions:

Mindel said:
Any word yet on whether this will be part of a free patch, a flavor pack, or a bigger DLC?
Click to expand...

MrSnert said:
So, how does this forced subjugation through missions work when almost every nation in the region gets a ton of these? Do you steal vassals from others, do they continuously go back and forth between different Malay princes? How does this work in multiplayer?
Click to expand...

AI typically doesn't pursue missions aggressively, in my playtesting I haven't seen this as an issue at all. When you would get a subjugation CB from a mission but the target is already a non-tributary subject or doesn't exist, you instead get permanent claims on the relevant provinces.
Toggle signature
EU4 Content Designer
Reactions:

RhoxOS said:
Is Sulu getting a whole new mission tree or just green and blue or is Sulu left out because it's technically in the Philippines which means it's out of the scope?
Click to expand...

Nothing special planned for Sulu, except that they might get unique national ideas if I find the time.
Toggle signature
EU4 Content Designer
Reactions:

StormyH said:
About next week dd, I think you should change Cham culture back to Malay group. On the the hand, Dai Viet's mission tree in the ET mod is a good thing to be applied
Click to expand...

I've changed the culture setup since I lasted posted it, I'll talk about it again another time.
Toggle signature
EU4 Content Designer
Reactions:

RGSteer said:
Will the formable Malaya be getting any unique ideas and if so when can we expect to see them?
Click to expand...

BoomKidneyShot said:
A lot of these missions seem quite inflexible regarding religion. What if I want to do a Hindu Malacca playthrough, how does this impact the way mission rewards (particularly the CB) work?
Click to expand...

There are always fallbacks but they're a lot less interesting. It's pretty much impossible to make content that is both interesting and generic to every possible situation, so if you're interested in playing through a mission tree to experience the content it's really better to do that by following the "expected" path - in this case not going to great lengths to flip your religion to Hindu as Malacca.
Toggle signature
EU4 Content Designer
Reactions:

Alilolo said:
Also would you add a new Acehnese culture? Since you added a new Sundanese culture in Java, maybe you could do away with Sumatran culture and have it separated into Aceh, Minang, and even Malay is central sumatran provinces (riau)..
Click to expand...

Acehnese is in fact a new culture in this update.
Toggle signature
EU4 Content Designer
Reactions:

(I dont know if this idea has already been posted yet)
After reaching certain naval tradition treshold, Aceh would get a high stat Admiral named Keumalahayati.

she was a female acehnese admiral who led an army of widows that fought against Dutch and Portuguese ships in the straits of Malacca. She famously killed Dutch explorer Cournelis De Houtman in 1599. She was killed in a battle against a Portuguese fleet off the Bay of Krueng Raya.