Hello and Welcome to another development diary for Europa Universalis IV. This time we take a look at a concept that neither we nor you have not been entirely happy with in any previous Paradox game: Espionage.

In the next major patch, we have completely reworked how espionage works. No longer is every spy action done by just sending a diplomat that will perform the action for as long as it is there, but now there is a concept of spy networks.

You now send a diplomat on a mission to a country to build up a spy network. The network can reach up to 100% power, and that power can be used to execute spy actions, such as sow discontent, fabricate claims, etc.

Spy Offense has been renamed to Spy Network Construction, and determines how quickly you build spy networks in another nation.

Spy Defence has been renamed to “Foreign Spy Detection”, and now determine the chance of detecting hostile network buildups and disrupting it. A disrupted network will lose some of its power, and also make it impossible for you continue improving it for a time period.

Performing an action is instant, and as long as you have the power, success is automatic. However, networks that are not actively built will slowly decay.

You can also target other nations networks with counterespionage, to actively reduce their capabilities of their network. 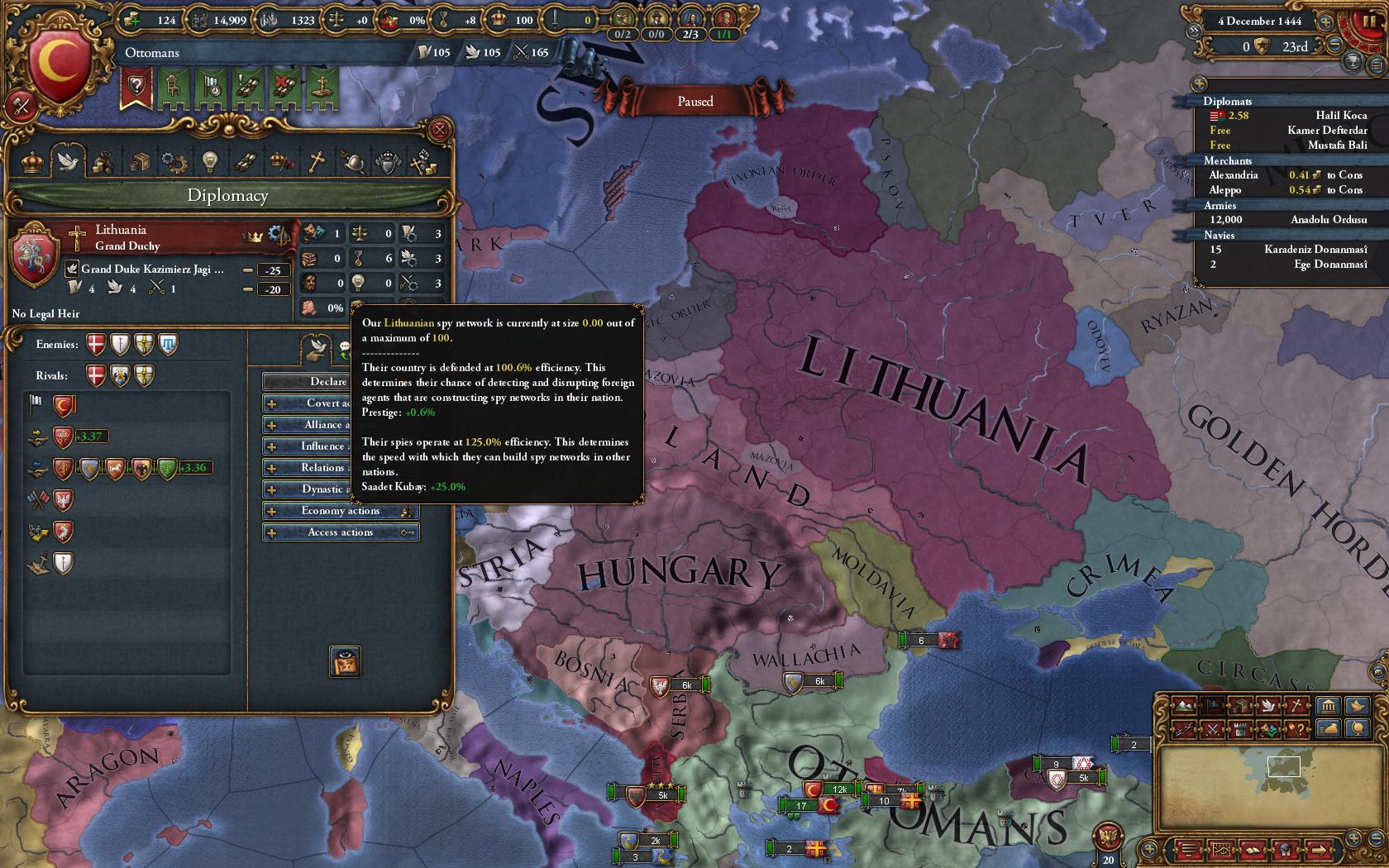 There are three passive benefits to having a strong spy network in another nation. First of all, if you have the Cossacks expansion and picked the Espionage Ideas, you have access to Study Technology, which is no longer a source of power, but instead a possibility to reduce technology costs by up 30% from having networks in nations ahead of you (the size of the discount depends on how far ahead they are in each tech). Secondly, the new expansion grants up to 20% higher siege ability against nations where you have a spy network. Finally, the new expansion gives you up to 10% less AE in that country.

Of course, all of those scale with the power of the spy network.

Fabricate Claim: Gives you a claim on an eligible province for a low cost.
Justify Trade Conflict: Gives you a trade conflict CB if conditions are applicable for a low cost.
Support Rebels: Selected rebel faction gets +10% chance to progress towards revolt each month for 5 years for a very high cost. It will also cost a fair amount of cash to support ythe troops.


The following requires the Espionage Ideagroup.


There is also four new actions enabled by the new expansion, two of those we’ll tell you about here, two others are for future development diaries.

Of course actions that require previously expansions will still require those expansions.

Next week we’ll be back with a look at Africa.
Reactions:

At last espionage will be nice idea group! Thanks Paradox!

One question though - do you plan to do anything with ledger informations? It doesn't seems right that I can see every aspect of every country... You could incorporate it into infiltrate administration, maybe?
Toggle signature
The cake is a lie.

The changes sound reasonably okay, but I feel like, in order for them to truly feel satisfying and enjoyable, diplomats and espionage would need to be decoupled entirely. Otherwise you're constantly having to play a game of diplomat shuffling to both improve relations and build spy networks, and that sounds like it could get real annoying real fast, especially in the HRE where AE reduction is crucial.
Reactions:

And more provinces in Africa next week??
Reactions:

That blood money symbol is in the top bar now.
Reactions:

It will be interesting to see how effectively one can hinder/prevent claim fabrication with these changes.
Reactions:

Is agitate an instant +25 desire instead of slowly ticking up now?
Reactions:

Does the changes to for instance claim fabrication replace the existing one, or is it an alternative way to fabricate a claim?
Reactions:

I still think all the actions that require the Espionage idea group should be available to everyone, Espionage ideas should just make them a lot more cheaper/effective.
Toggle signature
Only the dead have seen the end of war ~ Plato

So to gain claims you send a diplo to build up your network then once its high enough you can just click a button to gain a claim instantly? Multiple times (As long as you can pay the cost)?
Toggle signature
Extend to 1836 - A simple EU4 mod to bridge the 1820-36 gap; ready for a Vic2 conversion
Reactions:

Given the spy network idea, it now makes sense to have ledger information be accurate to a degree based off of hearsay and spy network. (Hearsay being that you get a higher base accuracy for countries near to you and countries with a high trade value in a node you have a lot of power in).
Toggle signature
"There is no such thing as an unbiased argument - indeed, facts support bias', or else they wouldn't exist." - Grand Historian

Will support rebels be cheaper? The monetary requirement was/is pretty absurd. Even massive countries pretty much had to lay down MASSIVE amounts of money for fairly minor nuisances.
Reactions:

wielkiciensteam said:
At last espionage will be nice idea group! Thanks Paradox!

One question though - do you plan to do anything with ledger informations? It doesn't seems right that I can see every aspect of every country... You could incorporate it into infiltrate administration, maybe?
Click to expand...

Withholding such information from the player would be much more annoying than the extremely small immersion damage it does at the moment.
Toggle signature
When you reduce a family tree to a family bush, you can't hide as much underneath.

When you're talking about "cost" do you mean money, monarch points or some hypothetical "espionage points", or what?

Do I understand correctly that as long as I have a strong network in a country, I can now get a bunch of claims instantly, but would have to pay some cost?

The changes sound very interesting, I like them a lot. I just hope espionage doesn't become a must-have idea group because it's too good.
Reactions:

Johan said:
Finally, the new expansion gives you up to 10% less AE in that country.
Click to expand...

Is this '-10% global AE for taking provinces from that country' or '-10% AE in that country'? The latter seems like it would be fairly insignificant unless you had large networks everywhere nearby.
Toggle signature
I sometimes stream achievement runs and stuff.
Reactions:

Can you tell me what were you doing to Hungary as Ottomans? Or Top Secret aka Next Dev diary thing?


EDIT: Nvm i read the whole DD This is probably the Espionage thing that will be covered in the upcoming Diary

PS. Nice Bloody sack of money you got there next to sailors...

I like it
Toggle signature
I was responsible for the 2D Art in Mesoamerica Universalis
https://forum.paradoxplaza.com/forum/index.php?threads/mod-mesoamerica-universalis.970935/
http://steamcommunity.com/sharedfiles/filedetails/?id=861977085​

MaXimillion said:
Is this '-10% global AE for taking provinces from that country' or '-10% AE in that country'? The latter seems like it would be fairly insignificant unless you had large networks everywhere nearby.
Click to expand...

I would think it means per individual country that gets AE from your schenanigans, to simulate your networks propaganda efforts.
Toggle signature
When you reduce a family tree to a family bush, you can't hide as much underneath.