Hello everyone. For those of you who have no idea who I am, I’m EUIV’s Content Designer, replacing @Trin Tragula who is now Game Designer on Imperator. I started working on EUIV in January with Rule Britannia and I’m looking forward to creating content for the game for the foreseeable future.

In today’s dev diary I’ll be showing off the new formable nations coming in the 1.26 Mughals update as well as their national ideas.

Astute viewers of our weekly Dev Clash (currently on hiatus for Summer) will have noticed that Delhi is now formable. Once a mighty empire encompassing nearly the entire subcontinent, the Sultanate’s fortunes declined dramatically after Timur’s devastating invasion. It is increasingly unlikely that the ruling Sayyid dynasty will be able to hold the city as their neighbors in Jaunpur and even their own subject, Bahlul Lodi of Sirhind, seek the throne for themselves. Forming Delhi in 1.26 will not only give you access to their unique mission tree, but also to their new national ideas.

Code:
Panjabi players without designs on the throne of Delhi may now form Punjab after converting to Sikhism. This will enable the Sikh branch of the new Indian mission tree, which focuses on the establishment of the Sikh Empire.

As shown in earlier dev diaries, we've broken up Nepal into several minor nations, with Nepal itself becoming a formable nation with a striking new map colour. While Nepal will retain its current militaristic idea set, the Nepalese minors have a set of their own.

Code:
Moving on to the eastern part of the subcontinent, Orissa is now formable by nations willing to brave its vassal swarm to wipe it off the map. Forming Orissa will net you access to their unique missions, but it isn't the only option available to nations in the region. The Kingdom of Nagpur can now be formed by Central Indian nations who manage to unify the Gonds and Garjats. Historically founded by one of the Gond kingdoms, it later became dominated by the Bhonsle Marathas who made it into one of the largest Indian realms of the 18th Century. As with all our new formable nations, Nagpur has unique national ideas.

Code:
For southern Indians the Nizamate of the Deccan is now formable. Historically beginning as mere governors under Mughal rule, the Nizams would become an independent monarchy ruling over a large portion of the Deccan Plateau. Forming Deccan will give you access not only to a unique set of national ideas, but also to the Bahmani mission tree. 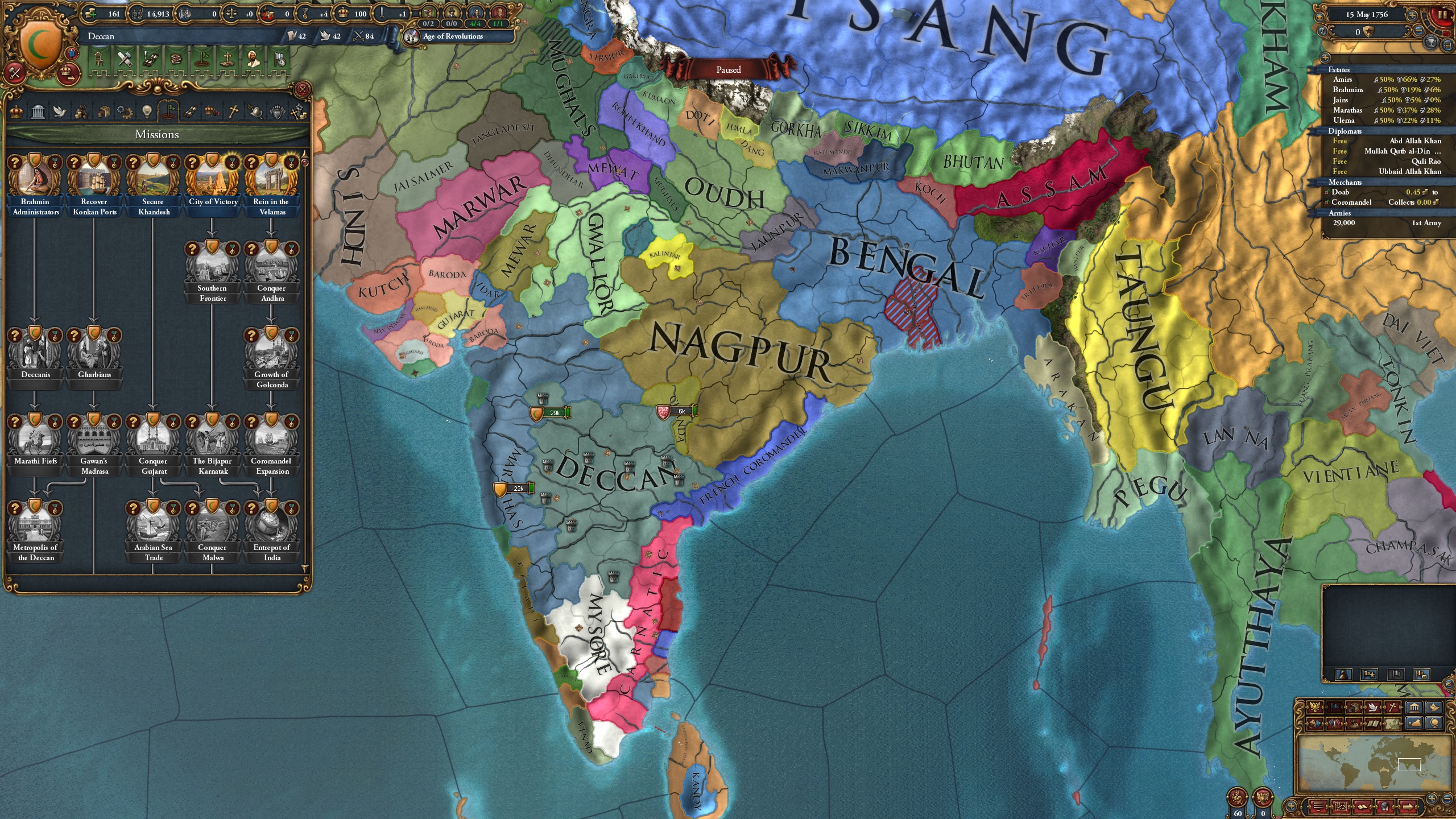 As well as Nagpur and Deccan, this snapshot of the year 1756 also shows another formable nation: the Maratha Empire. While they already had an idea set in 1.25, we've improved and revamped them for 1.26.

Code:
Following Mewar's new mission tree will lead you down the path toward forming Rajputana, a nation destined to be a major contender in the distant future of the year 5130. Mewar itself has also acquired national ideas of its own. These Rajput ideas will bolster the strengths of your Rajput Regiments even further with their bonuses to fire damage.

Code:
Finally, forming Bharat or Hindustan will no longer be within easy reach of any nation in 1444. You must truly become the master of India before laying claim to the entire subcontinent. Though these nations have become much more difficult to form, they now share a new mission tree and each have their own national ideas.

Code:
That's all for today! Next week @Groogy will be talking about MP teams and the new Indian siege view.
Last edited: Jul 9, 2018

The Powercreep is real

administrative_efficiency now in National ideas (no longer Yuan ondly)
At least 2 Mill bonuses in each idea-set
Idea-sets that can compete with Europeans
This just seems like a we buff all Formable Nations so u buy the DLC since u wan't to play in that Area
ne
Any thing known how they are planing to dress Powercreep, if they just add more power to the Game ?

If u wan't to continue Buffing stuff like that, make sure to nerf stuff at the same time to make up for it
Example, by adding so many CCR to the game
( This patch in idea-sets,
up to 10% last patch from innovativeness,
Cradle indirectly by allowing +5 advisors,
Mandate by adding 10% from Goldenage,
I hope u get the idea)

You need to start nerfing stuff, since else u just make more Powercreep
Last edited: Jul 10, 2018

A central Indian run always looked hard. But Nagpur looks so good that I must try!
Toggle signature
Ta-Da just realised that this is where you do these signatures
S

Good to hear Nepal keeps it's awesome idea set. I look forward to tagswitching a ton in India for maximum effect

Jaunpur --> Delhi (for cores and claims) --> Nepal (for the ideas) --> Mughals (for government boni)
Toggle signature
Tryharding games like Europa Universalis 4 in a casual manner.

No CB best CB? Not sure if it's a working name, it'd be hilarious if that was actually Nagpur's last national idea.
Last edited: Jul 10, 2018
V

Aka broken as f

magni. said:
This just seems like a we buff all Formable Nations so u buy the DLC since u wan't to play in that Area
Click to expand...

Formable nations and national ideas are all part of the free patch, you don't have to pay a dime for this
Last edited: Jul 10, 2018
Toggle signature
Victoria 3 Game Design Lead
C

Vulkandrache said:
Aka broken as f
Click to expand...

Nice, Deccani ideas also increase administrative efficiency Yuan has been the only nation in the game to have that so far.
S

Fr4nt1s3k said:
Nice, Deccani ideas also increase administrative efficiency Yuan has been the only nation in the game to have that so far.
Click to expand...

Now you don't have to become Emperor of China to get an extra 5% administrative efficiency. I'll be honest, that seemed like a decent trade-off balance wise, which is gone now.

The ideas seemed underwhelming to me compared the top tier sets. Good, but not amazing.
S

RCC nations are the only ones worth playing to be honest, so I rate this dev diary A+

RIP our multiplayer, this region needs as much players as in Europe right now
Bharat and Hindustan are now Japan(with oda or shimazu ideas) but in richest region of the game.
Last edited: Jul 10, 2018

So do Bengal and Gujarat retain their original ideas?

neondt said:
Formable nations and national ideas are all part of the free patch, you don't have to pay a dime for this
Click to expand...

It's not about paid, not paid. It's about it's in the national idea and comparision with the existant idea set of the older nations in the game.

Yep. We haven't seen the new policies yet, but +1 free policy sounds really strong. Anyway it's pretty much equivalent to +1 mil monarchpoints. Combined with the other military bonuses in the tree it looks really strong. The + movement speed is also awesome for stackwiping.
Show hidden low quality content
You must log in or register to reply here.
Share:
Facebook Twitter Reddit Tumblr WhatsApp Share Link
Top Bottom