Hello! Today we’ll talk about yet another system reworked in Dharma and another feature to make European presence in the rest of the world more interesting. Let’s start with the new feature.

So when we talked about the Charter Trade Company feature, a bunch of you wondered why in the name of Shiva would an Indian ever surrender a province to the Westerners even for a big pile of gold? So I am here to answer that.

We’ve had since Wealth of Nations that you could create Trade Companies in special Charter Regions of the world. It was always a pet peeve for me how they worked out and always wanted more out of it. Company provinces never really covered the interaction you had between the various companies and the local rulers of the area. The initial interaction between the Europeans and India was one of trade, except one… staring at you Portugal. Either way we wanted a way for Europeans and Indians to benefit from each others presence… at first at least

So now when a European have established their Trade Company they can further their investments in them by building them up. You’ll have 10 investments you can build up per area you have a company present in, and 5 special ones you can build per charter. They are not the cheapest, the lowest going for 300 ducats, it’s upgrade 600 and the special ones goes for a 1000 ducats. So someone wanting to exploit the full riches of the Far East is going to heavily invest their resources into it. 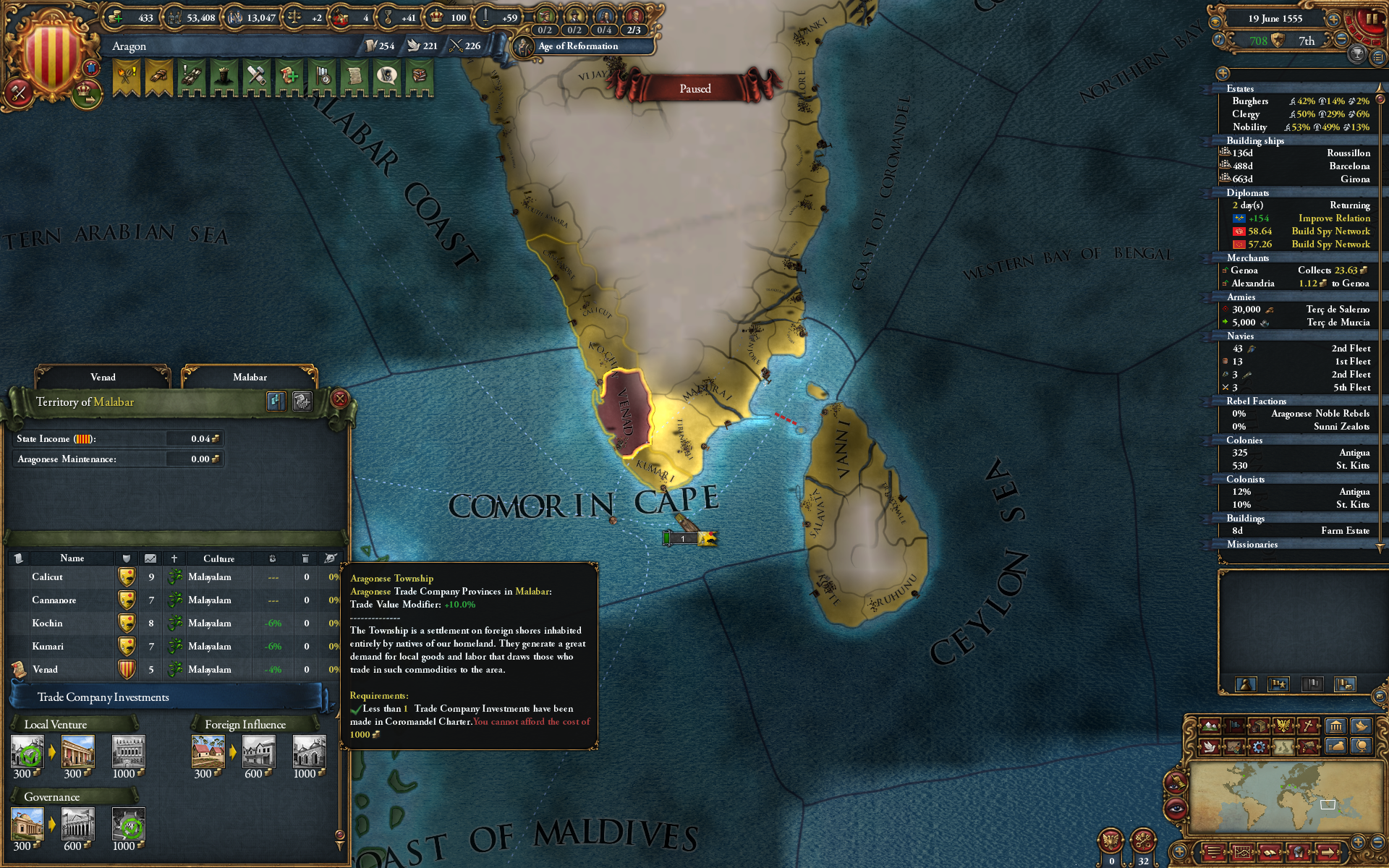 The effects of these investments in their benefits given to you are fairly powerful but most of them also gives bonii to the immediate area or even the larger area for some of them. A little note though they do not stack with modifiers from other nations investments. Here’s an ambitious attempt to list them in full, in case not specified otherwise, the effect is only on the area they are built in.
Note that this is till work in progress and numbers are subject to change as we test for balance.

That’s it for Trade Company Investments, next up is the system rework that we’ve been so cruel to hint around about on the Dev Clash stream.

There are 120 different policies but there are a very few select that stand out as favorites making pretty much most of it obsolete. Never cared for that and wanted to see a lot more interesting builds be available we’ve reworked the entire thing to change how you interact with it, but also rebalanced a big bunch of them. No longer is Quality Standard policy giving you 5% discipline an Administration policy and the 50% Transport Combat Ability policy is gone. But we’ll get to that later.

First let’s dive into the mechanical changes we’ve done. You can no longer activate 5 policies anymore but you enact 3 per category of monarch power. This means you can at max have 3 policies activated in each category. You also get 1 policy for free per category in order to promote long-term usage. These numbers are however not fixed, some government reforms will let you tweak these, national ideas can also be a source like the Deccan ideas who get an extra administrative policy for free. However this requires Dharma. 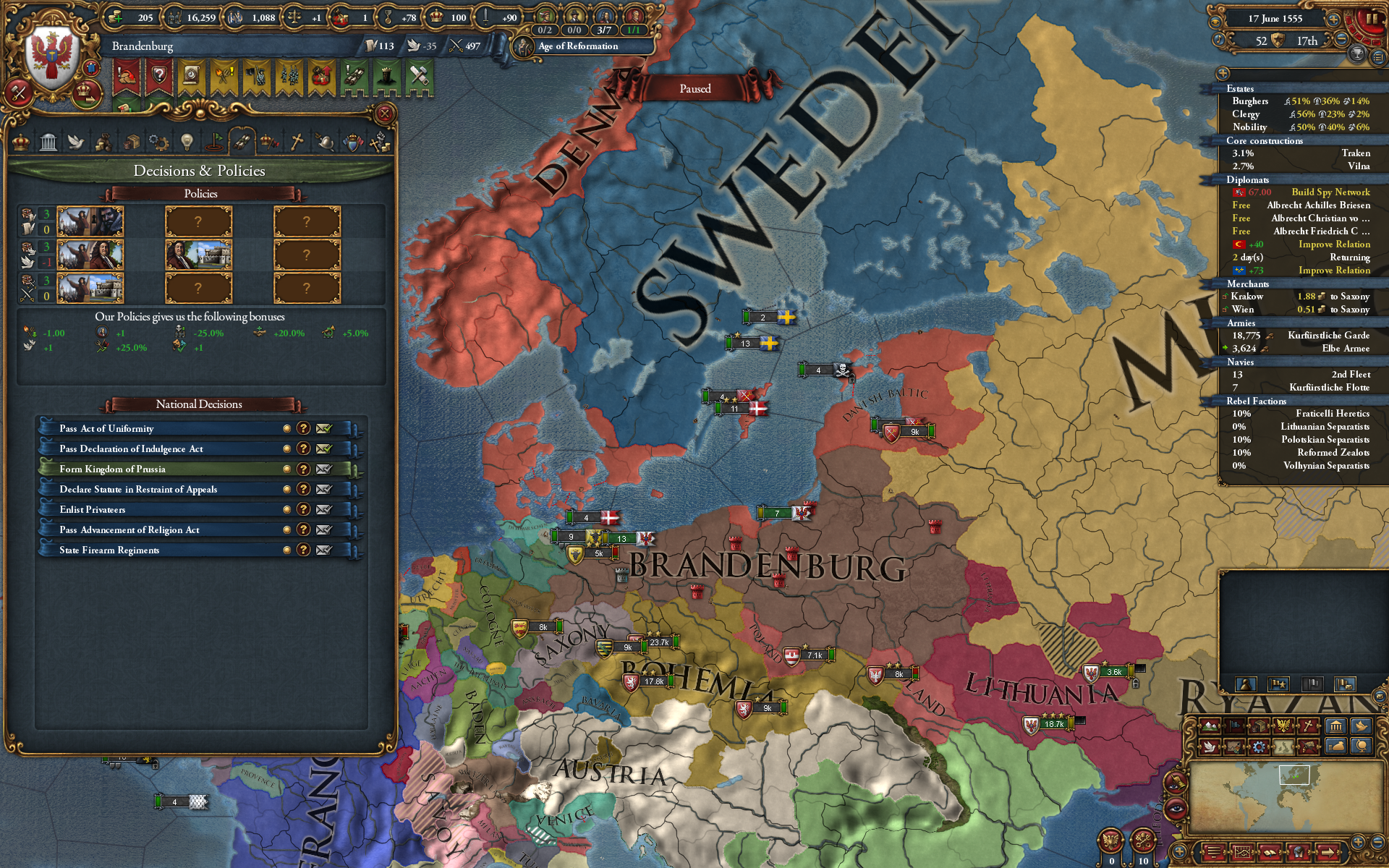 So for how we went through and balanced these, removed old bad policies, added new interesting ones, I’m not even going to attempt to list 120 policies in this diary. But instead I’ll share an image of the document I used to view everything at once so I knew sort of how it was looking.

Yet again I can not stress enough, all of these numbers are work in progress!

Hope you’ve enjoyed this dev diary and that it has been meaty enough for you. Next one will be covered by your favorite scotsman, Jake, who will go through some much requested quality of life features.
Last edited: Jun 5, 2018

Excellent that Euro-Indian interactions are getting attention. Definately making it worthwhile for colonizing players to push into India is nessesary, as are reasons for Indian players to not simply brush them off.

I really hope that Euros become a threat to Indian nations in the late game. It would be excellent to see a real dynamic anti-colonial struggle.

Glad the policies are being reworked!

Seems the Trade companies are going to become next money sink for good benefits. Not a bad thing necessarily, but at this point there wouldn't be any reason not to give land to a trade company right? Especially if you have the money.

The only thing I'm still missing however, is how the Indians profit from all of this. You hinted on something bigger than a temporary cash boost.
Toggle signature
Tryharding games like Europa Universalis 4 in a casual manner.

Oh god... There's so much to learn, but I like the new policies system though!

Looks amazing ! Do Portugal still have their event with Goa then ?

Is forming trade companies still based on being on a different continent, or have you figured out a system that doesn't have such annoying edge cases (Asians moving capital to Oceania, Oman being able to make them in China but not in Zanzibar)?
Toggle signature
I sometimes stream achievement runs and stuff.

SPAMbuca said:
The only thing I'm still missing however, is how the Indians profit from all of this. You hinted on something bigger than a temporary cash boost.
Click to expand...

I think that every province in the state will get the bonuses of the trade company. Or maybe it's not.

Looks nice. Can't wait to get my hands on this expansion pack
Can we expect any religious issues with these trade companies or something akin to the opium wars?
S

After looking over the policy rework, it seems the morale boost policies are still tied to religious, quality and quantity. Not a bad thing necessarily, but maybe it would be an idea to give national idea groups that aren't picked a lot some combat modifiers too? I see espionage got 20% cavalry combat ability which is a good start.

edit: considering the new limit of 3 policies of each type, I think in most cases I'd still go with the 10%, 5% morale boni and 5% discipline. I'd need 4 idea groups for that. Quantity, quality, economic and religious.
Last edited: Jun 5, 2018
Toggle signature
Tryharding games like Europa Universalis 4 in a casual manner.

I like the general structure of policies now. Easier to use and more flexible. Very quick policy opinions:

Exploration-X: A lot more settler growth, cool, but even cooler is adjusting the assimilation/uprising rates which can encourage taking different Colonial policies besides all peaceful or all repressive.
Influence-Admin: I see you're taking a nerf bat to annexation costs. Trying to encourage more direct conquests rather than vassaling over the world? Kind of a shame for people who like taking more overextension than sense.
A

So investments instead of buildings? Did I understood properly?
Toggle signature
https://forum.paradoxplaza.com/forum/index.php?threads/streltsy-disasters.1104950/ - my suggestion of unique disaster for Russia and nations with primary culture of East Slavic culture group

RMS Oceanic said:
Exploration-X: A lot more settler growth, cool, but even cooler is adjusting the assimilation/uprising rates which can encourage taking different Colonial policies besides all peaceful or all repressive.
Click to expand...

It also makes France ideas a bit more relevant. I always thought that their fourth idea felt out of place in the context of the game. Now you could still go repressive and still not get any revolts plus additional assimilation with the right policies.
E

Corruption is a mistake and should be removed from EU4.
V

This is what ive been waiting for forever.

I love the new Exploration/Expansion policy. -50% native uprising combines really well with Native Trading Policy. That will be my first pick in the Portugal game I'm planning to start the next version with.
Toggle signature
Capital: The area of a country, province, region, or state, regarded as enjoying primary status, usually but not always the seat of the government.
Capitol: A building in which a legislature meets.

What does the term "quality of life features" that everyone seems to be using lately mean? :S What does the expression refer to?
S

Zwein said:
I think that every province in the state will get the bonuses of the trade company. Or maybe it's not.
Click to expand...

Could be, but it's not stated in the dev diary. I find it strange Indians could use a trade company's buildings. I see some buffs to areas, but what if the entire area is bought/part of the trade company? I still wouldn't want the Europeans in.

So far, the buffs to the area are cheaper development/building cost and goods produced. I at least thought it would require the sharing of knowledge.
Toggle signature
Tryharding games like Europa Universalis 4 in a casual manner.

Wow, normally this amount of material to cover is done in 2 dev diaries so thanks for putting it in 1.