Jump to latest Follow Reply
Menu
Install the app
You are using an out of date browser. It may not display this or other websites correctly.
You should upgrade or use an alternative browser.
Empire of Sin 438 Beta Branch forum 13 Suggestions 258 Technical Support 44 Mods Bug Reports 1012
Previous dev diary Next dev diary 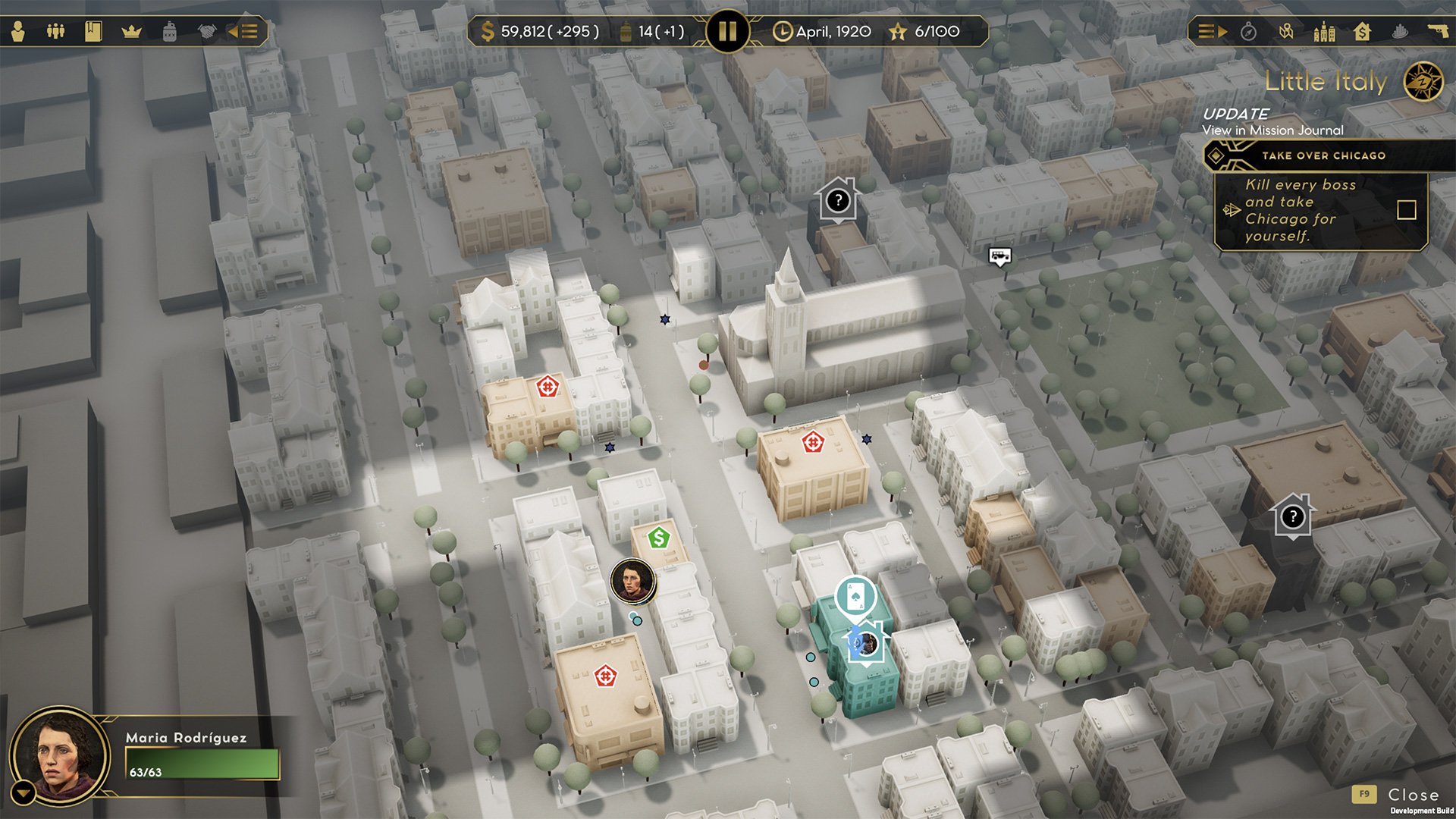 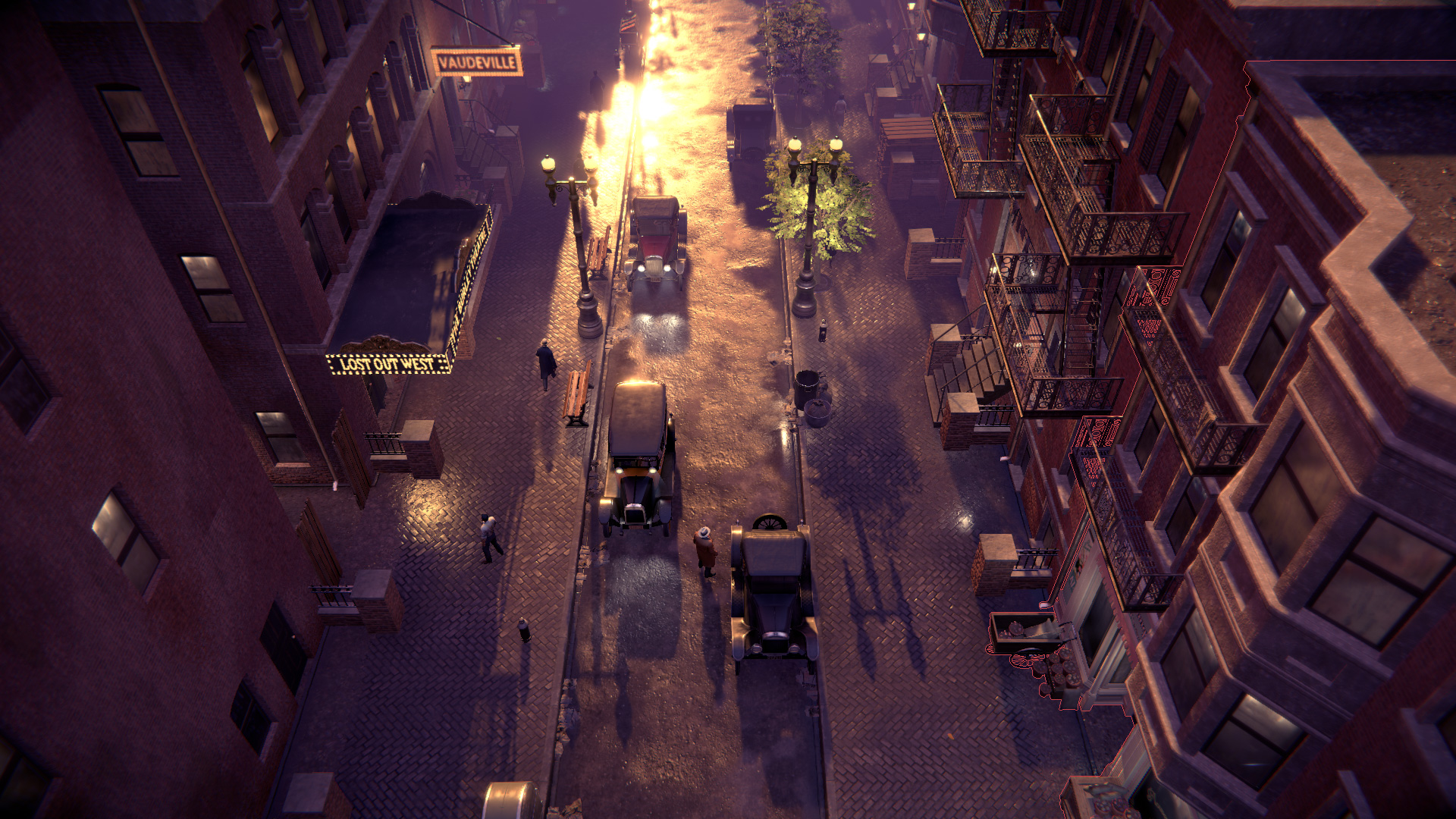 Starting Empire of Sin has a familiar cadence boss to boss. You’re going to run into someone you know on your way into Chicago, and between the two of you, you’re going to come to some kind of decision about the best way for matters to proceed.

Out on the street, it’s now time for the early-game strategy to begin.

Lay of the Land
When I arrive in Chicago, there are two primary things that I am concerned with. First, I want to get a lay of the land. I immediately zoom to the world map from street view to get an idea of where I am and who else is here. For me, it is also one of the most exciting times in the game. I’m discovering who else is here, what they might already own, and what is nearby for the easy taking. The locations of other safehouses also gives me an idea of the level of security I need in the early game. If you’ve played any games that take place on a map (and I have a feeling most of you have), the survey of the starting map is equal parts discovery and “ass on fire.”

When I first arrive in the game or in a new neighborhood, I am looking for these things, and I’ll cover these in this post.

Safehouses
Obviously, I’m here, but who else is? A look at the map reveals nearby safehouses. The quantity and location of said safehouses is critical. It’s important for me to learn who owns these safehouses. Each boss has their own personality which means they might be more aggressive with their territory and thus have a desire to roll over mine. If there are no safehouses (unlikely), I’ll have a good start getting this neighborhood to myself. If there are two, but we’re spaced out, I feel like I have a chance to get a foothold. If there are three or another close to mine, however, it’s time to hustle. From this early lay of the land and the quantity of safehouses, I am making decisions about putting money into security to protect my budding empire vs. putting money into production to up either the quantity or quality of alcohol I’m making. For my rackets, I need to think about drawing people into my rackets with a word of mouth upgrade vs putting people by the door to keep the other faction riff raff out. I might play a bit more risky because I’ve been playing since milestone 1, but I tend to take my chances early on, getting more cautious as the game progresses and I have more to lose.

Chris King views this slightly differently. For him, knowing who the other bosses are isn’t as important. He tries to hold back and waits to find out who the other factions are when he has grown in power. The turtle strategy has you shy away from areas with other safehouses and instead focus on growth in other areas.

In the image below, you can see that I have a busy start. There are two other bosses here. When I figure out who they are, I’ll decide how I want to act. One advantage of taking out a boss before they really get going is that you can quickly grow your empire (the disadvantage being that they can quickly grow theirs, and it’s game over). 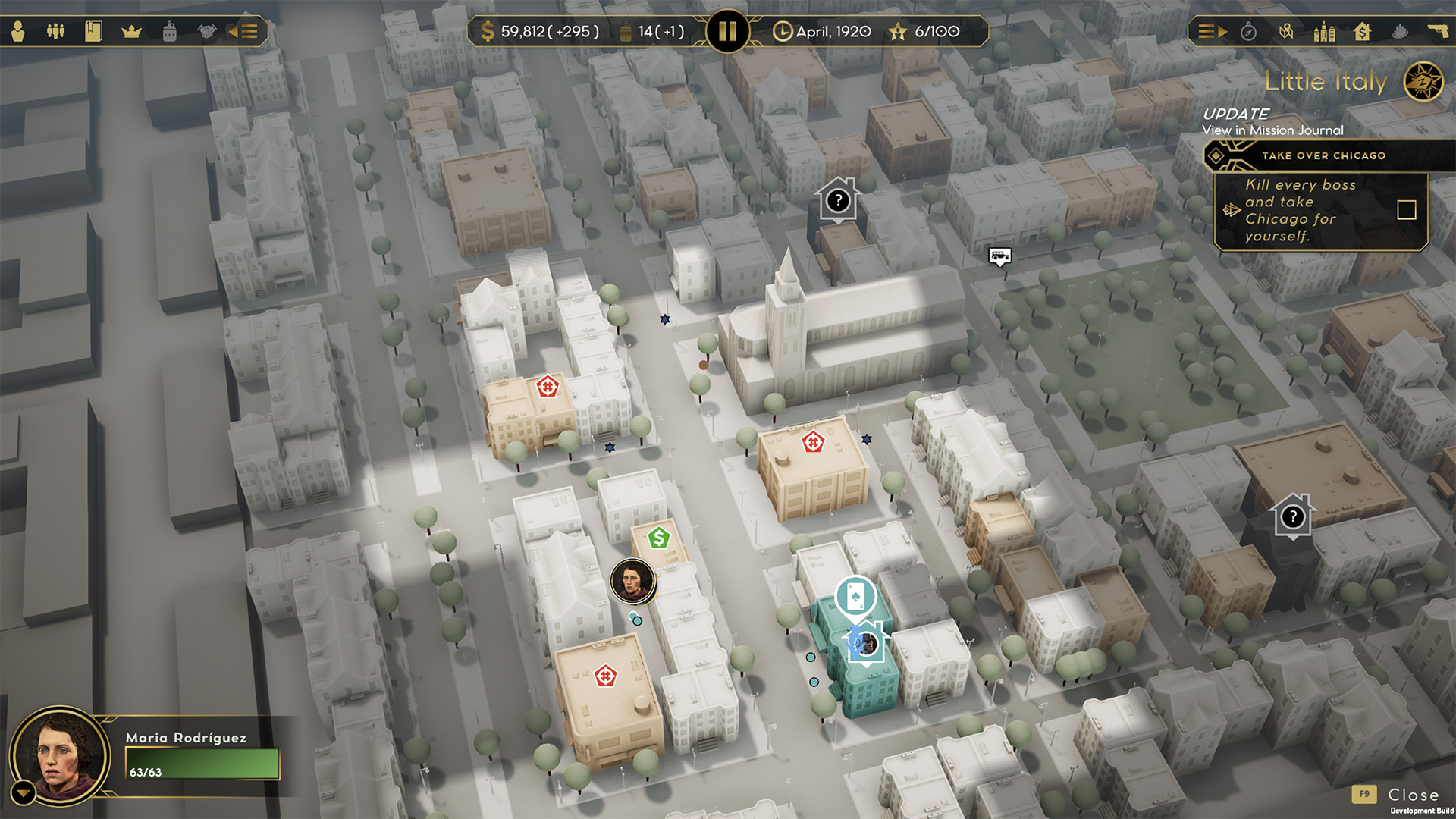 Agendas
Whether you’re on the world map or the street view, before long, you’ll see others checking out the world just like you are. Often, it’s people exploring (the binoculars icon). Sometimes, however, it’s people who are out for blood like the gang below. 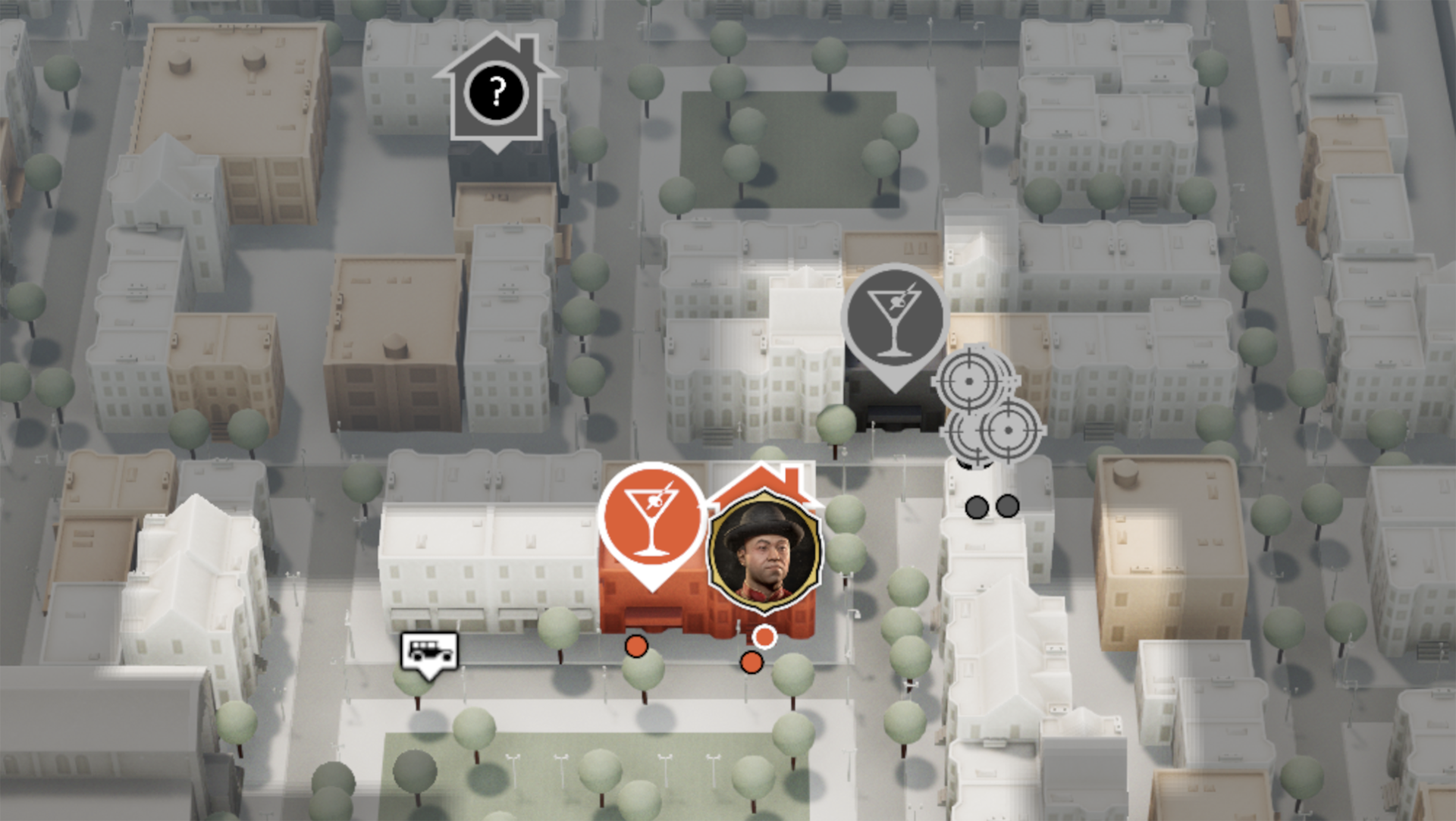 In this start, I am concerned firstly because the other safehouse isn’t too far from mine and they are already expanding close to me. They’ve sent out an extermination squad which I’m willing to bet are coming for me. I can head them off before they get to my racket or trust that I have set up a sufficient number of guards so that they can hold the place on their own.

As the game gets more advanced, I often use the world map to monitor what my enemies are doing and to avoid people who it might be a challenge for me to run into.

Breweries
Having a brewery early in the game is absolutely critical to your survival. Prohibition relies on a healthy supply of illegal hooch. You can get a brewery one of two ways: buy one or take one over. Breweries are pricey, however, and this results in the first interesting decision a player needs to make.

Each player has their own opinion of an ideal starting state. In a perfect world, I am really hoping that I’ll roll a brewery nearby run by thugs. This is a reoccurring pre-game fantasy of mine: I’ll jump into the game, and there will be a small brewery right next to my safehouse that I can take over with just a gangster or two. If it’s owned by thugs, I can take them out, and it’s mine for free. If it’s owned by another gang, I might still be able to take it over. Sure, it won’t get me off to the best start with that faction, but I hope I’ll be able to improve that or form an alliance with someone more powerful. The key is to get yourself a brewery to power your empire, however you do it.

Look for the Bonuses
Scattered throughout Chicago are caches left behind by other criminals hoping not to get caught. If you get to these first, they are yours for the taking. The way I usually spot them is to look for groups of thugs who seem to be guarding something. 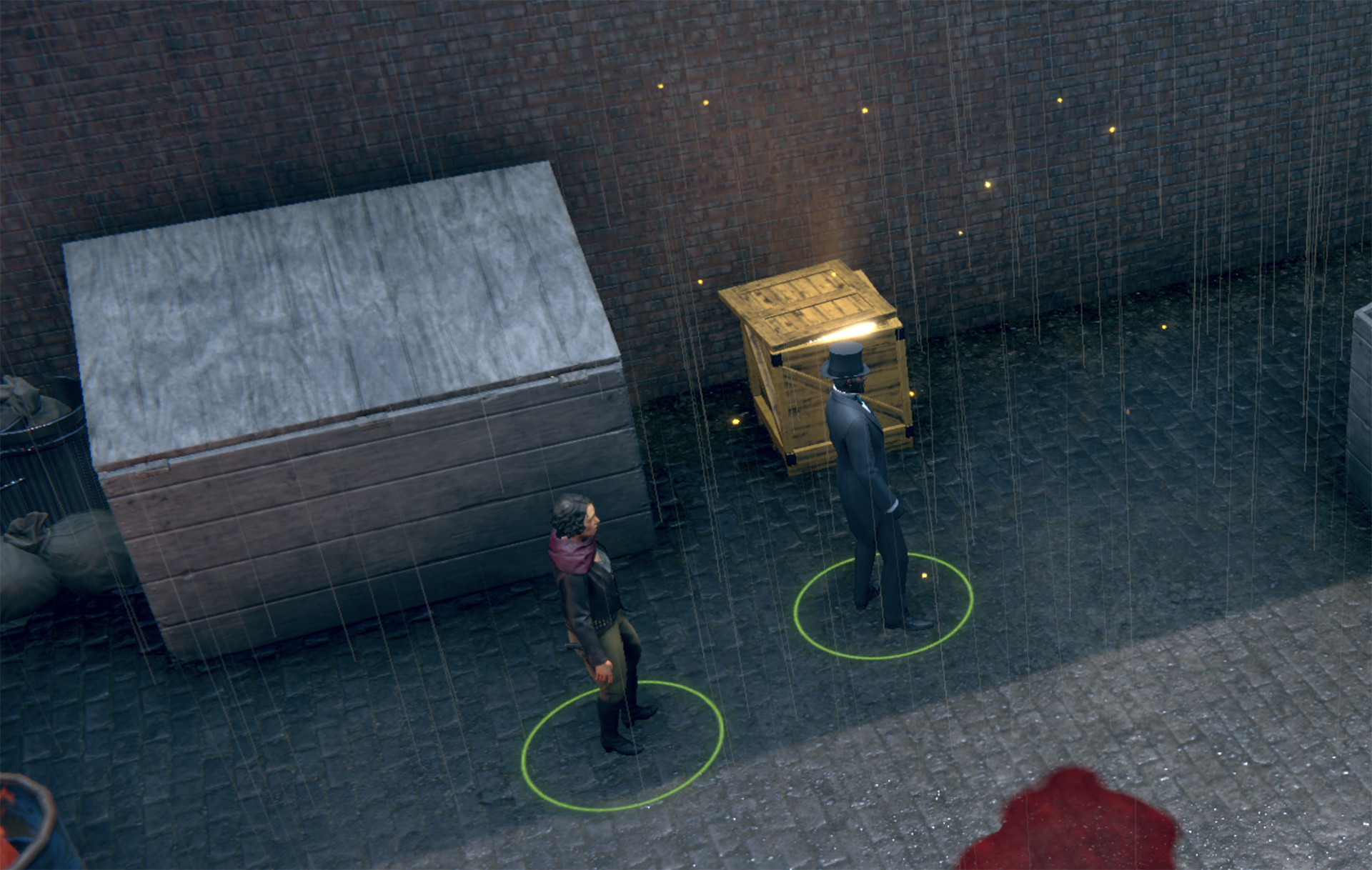 The caches range from a bit of cash or alcohol to something more game changing like $50K. Because of the amount of thugs surrounding this cache, I decide to hire a couple gangsters rather than going it alone. 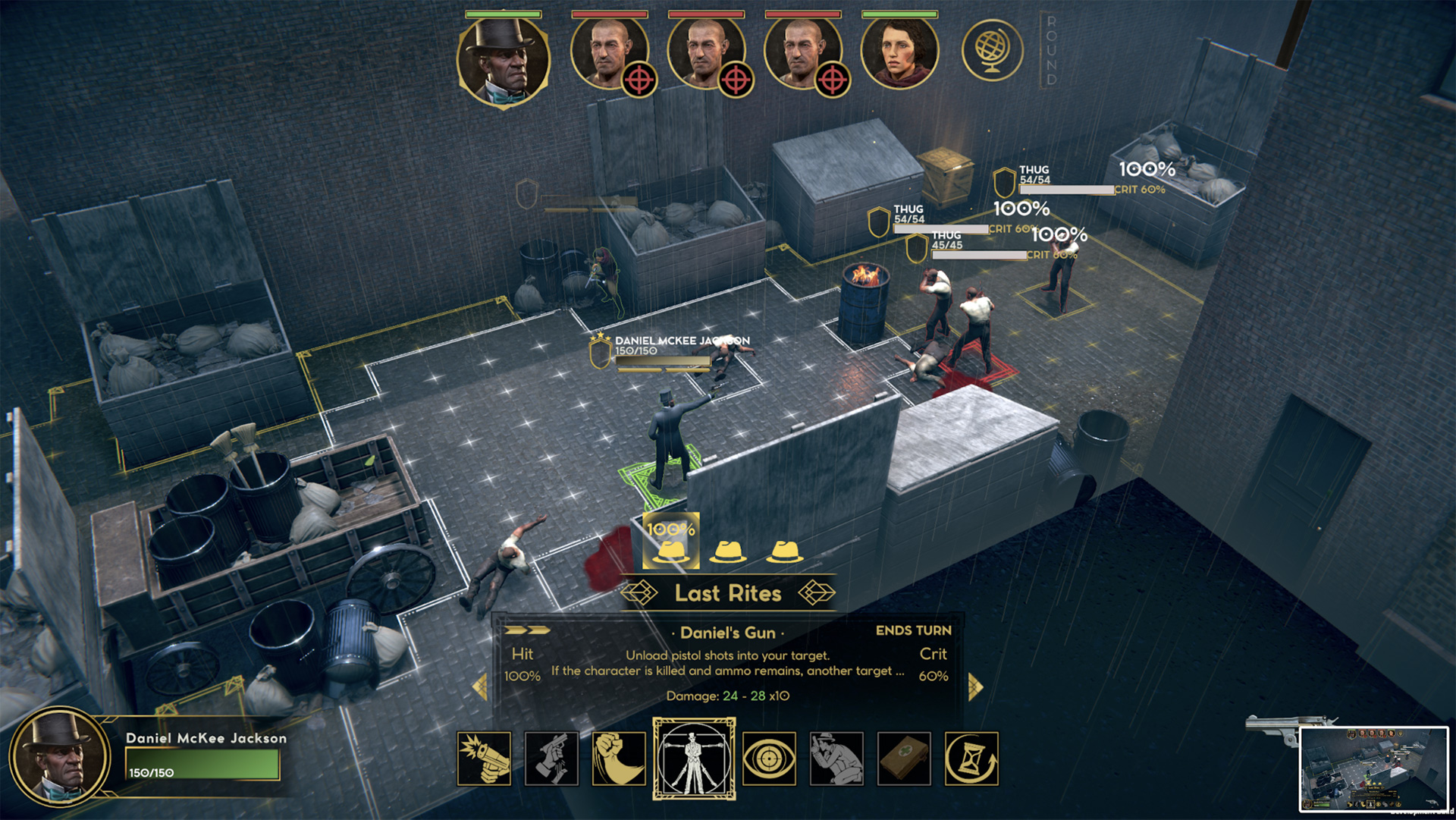 With the enemies cleared, the cache is mine, and fortunately, it turns out to be the €50K I was hoping for. The other bosses in my neighborhood are toast. 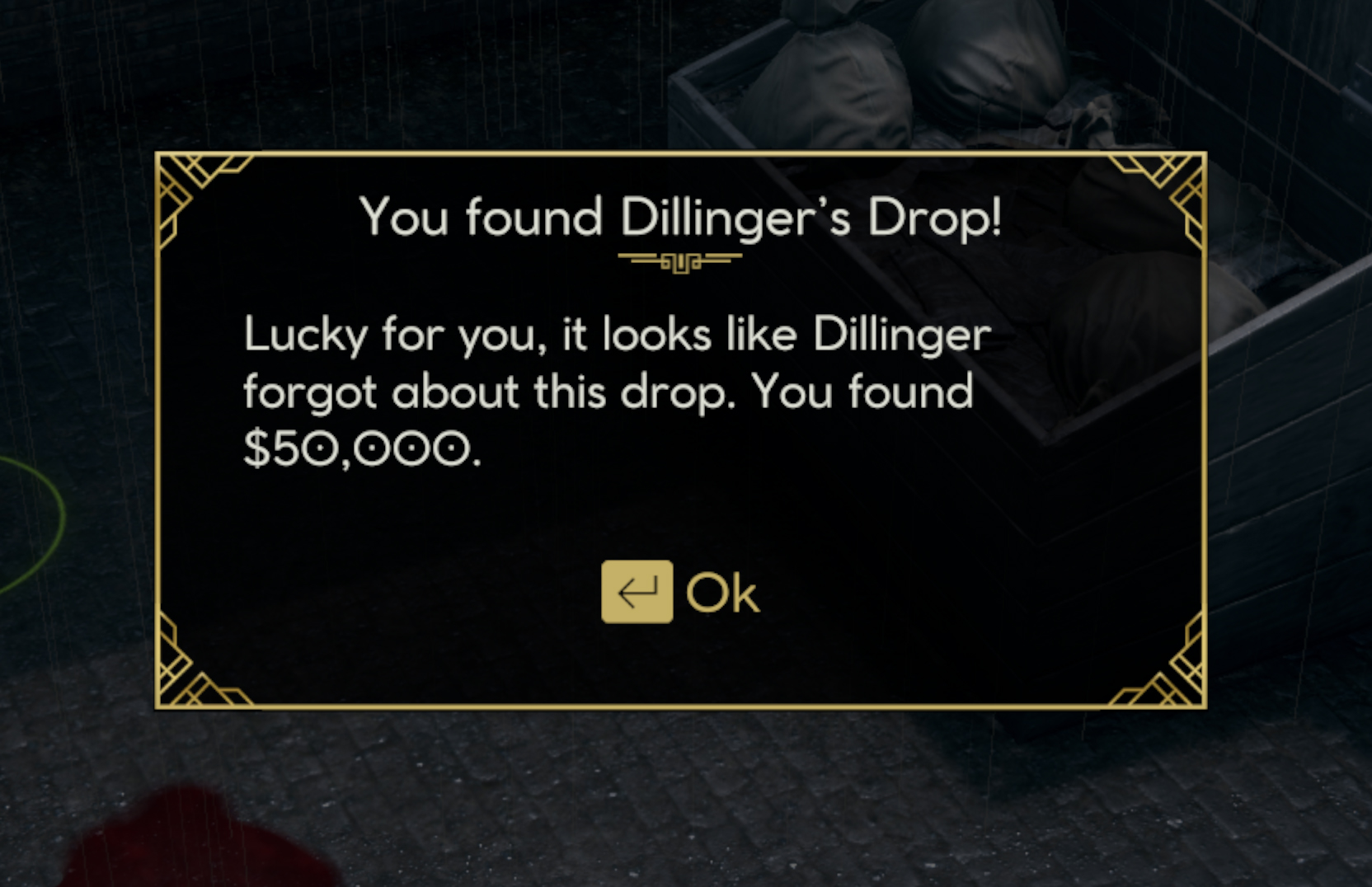 Back to Breweries
Up to this point, and if you looked at the screenshots earlier in this article, you might notice I haven’t actually gotten the brewery that I have been raving on about. With $50K, now it’s not going to be a problem! I could purchase a building and convert it thus saving life and limb, or I could take over another racket pay less than market price to convert it into a brewery which is precisely what I decide to do. 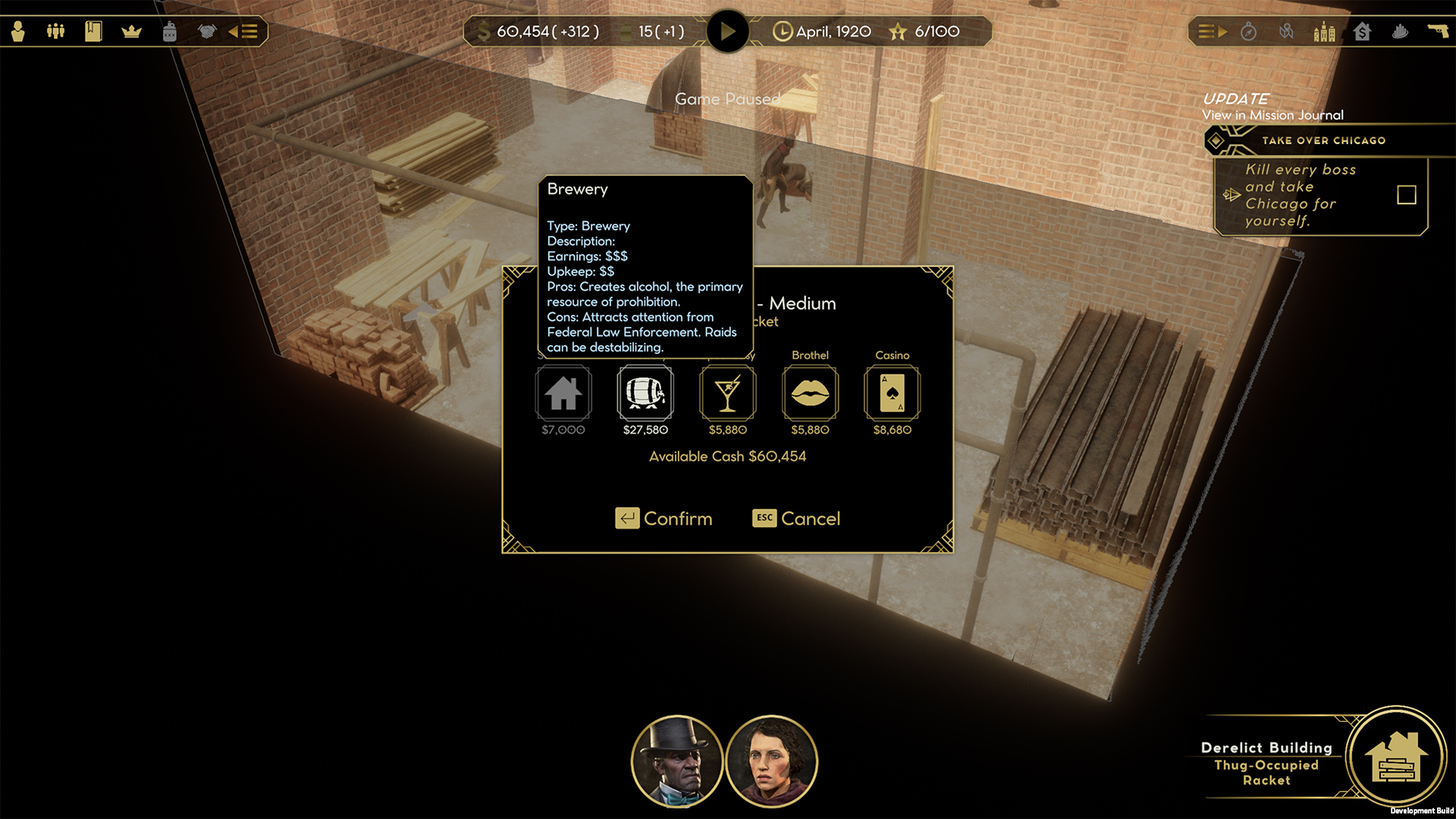 Next Up
Hopefully, this gives you a good idea of how to get your criminal empire off the ground. In our next Dev Diary, we’ll cover more gameplay! Stay tuned!
Reactions:

Second Lieutenant
Swedish gamer with way too much creativity for her own good. Postapocalyptic mobster.
Community Ambassador28 Badges
Sort by date Sort by votes

Can you smuggle booze from Canada?
Reactions:

Looks very interesting. One thing I'm curious about is if there are different ways to winning the game besides taking out your competition through violence. Is that the only option or will we be able to maybe raise the heat level and have our competition get arrested? Or other ways like that?
Toggle signature
Closed AAR:
Our Kingdom Stands Alone - How the Magyars Transformed Hungary into an Empire :: Weekly AAR Showcase - 19, September 2010


When I speak in this color, I do so as a Demi-Moderator.
Forum Rules :: AARLand Rules ​
Reactions:

MissDeliana said:
Brothels are profitable without alcohol
Click to expand...

But even more so with it. Imagine the possibilities: drunken customers who certainly won't call the police if say ... they discover the next morning there was a hole in their pockets.

Also: with 50k at the beginning being such an important boost, how random are these drops? Too much rng at gamestart is not something I value too high. Just my opinion of course.
Reactions:

Eber said:
Looks very interesting. One thing I'm curious about is if there are different ways to winning the game besides taking out your competition through violence. Is that the only option or will we be able to maybe raise the heat level and have our competition get arrested? Or other ways like that?
Click to expand...

Frank Costello, the Prime Minister of the Mafia, was the man who has all the Judges and Politicians in New York City in his pocket. He stays in power when Luciano is removed by an alliance with Albert Anastasia - the Lord High Executioner.

For this to remotely resemble the era, the sound of Chicago Typewriters (Thompson SMGs) has to fill the air and someone has to grease witnesses, the cops and the courts. There is the left and right hand of the Mafia.

So, yes, I hope what you say is incorporated. But if you do not flex muscle in this scenario muscle will be flexed on you.

Want an example? The Policy Banks, of which the Tia Juana Wheel and our Mortician friend above represents one of dozens in Chicago, came under control of the Chicago Outfit when Sam Giancana learned the tricks of the trade from Eddie Jones in the slammer. Momo took off the top layer of Policy Bank leadership using extreme violence, and started scraping off the profit for his own Family by those left alive willing to play ball with the Chicago Outfit.

https://gangsterreport.com/chicago-policy-wars-the-outfit-numbers-takeover-timeline-momo-makes-good/
Last edited: Jul 18, 2020
Toggle signature
It's a fool that looks for logic in the chambers of the human heart
Reactions:
I

How do the police/government interact with the crime syndicates?
Toggle signature
My second AAR! Take a look, I'd love to have some people read and comment on it.

Of Wittens and Wittelbachs: A History of Hussites, Protestants, Catholics, and Religious War
Reactions:

Looking good, although I do agree with some of the others posters that the RNG aspect shouldn't be to overwhleming.

When can we expect the next dev diary?
Reactions:

How exactly does the map work? Is it generated for each gameplay like in Gangsters: OC or is it standard?
Toggle signature
https://www.youtube.com/watch?v=9lxRobzMCSM
Reactions:

This is what I've been waiting for. To see some of the strategic gameplay. This looks quite good! You might just bump off the "maybe" list and onto the "will get" list.

We are having a Vintage Era Mob Boss Game , I am Hyped too man .

I am thinking about starting with Dean O'Banion , what about you guys ?

Dogukan91 said:
How exactly does the map work? Is it generated for each gameplay like in Gangsters: OC or is it standard?
Click to expand...