We’re closing in on the end of July, and we are on to the fourth of the five Dev Diaries we are doing over summer. For this week, we are going to take a look at three of the five Special Crusades we are doing for Holy Fury. First of we are going to take a look at the reworked Shepherds’ Crusade, then on to the Children’s Crusade some of you might have seen in the PDXCon stream, and then finally to the Fourth Crusade events.

As always, keep in mind that things might be changed before the release of Holy Fury. For the Shepherds’ Crusade to be enabled you will have to own Sons of Abraham, and for the two other you will need the Holy Fury DLC. 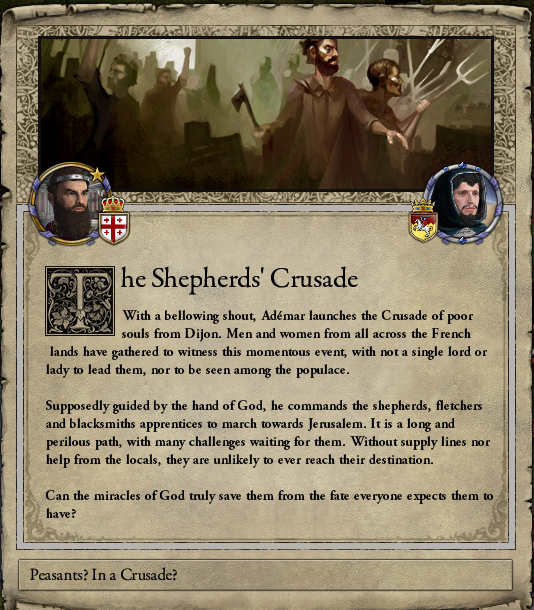 The Shepherds’ Crusade has been broken for quite a while, so we have ripped out the old events entirely, and rewritten the whole chain. With Holy Fury, a Shepherds’ Crusade has a chance to start a couple of years after a failed normal Crusade. It will start somewhere in Catholic Europe, and will usually target either a Kingdom in the Iberian Peninsula, or Jerusalem.

As the Shepherds’ Crusade army moves across the map towards its location, it will start picking up soldiers along the way, potentially getting into conflict with the local lords, trying to kick out the Jews, or ask local Lords for aid in their Crusade.

Who knows, once in a blue moon they might actually manage to win! 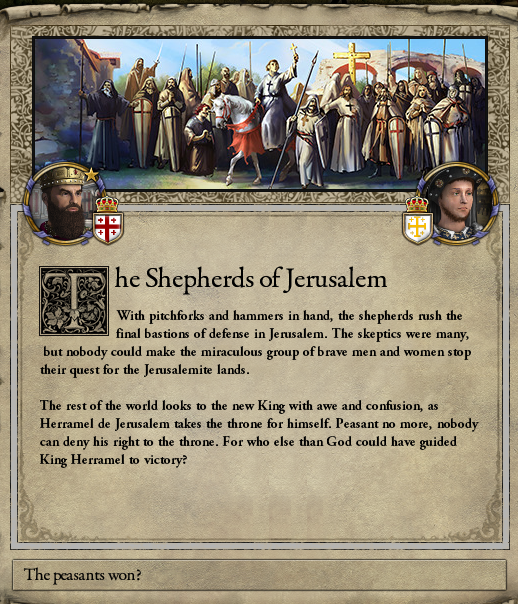 The Children’s Crusade is a special one-time event chain that can happen at any point after the Pope has announced the need to reclaim the Holy Land.

If Jerusalem is held by infidels, a landless child in Europe might decide to pick up arms and start his own little Crusade, gathering fellow Catholics and traveling all the way to the Holy Land. 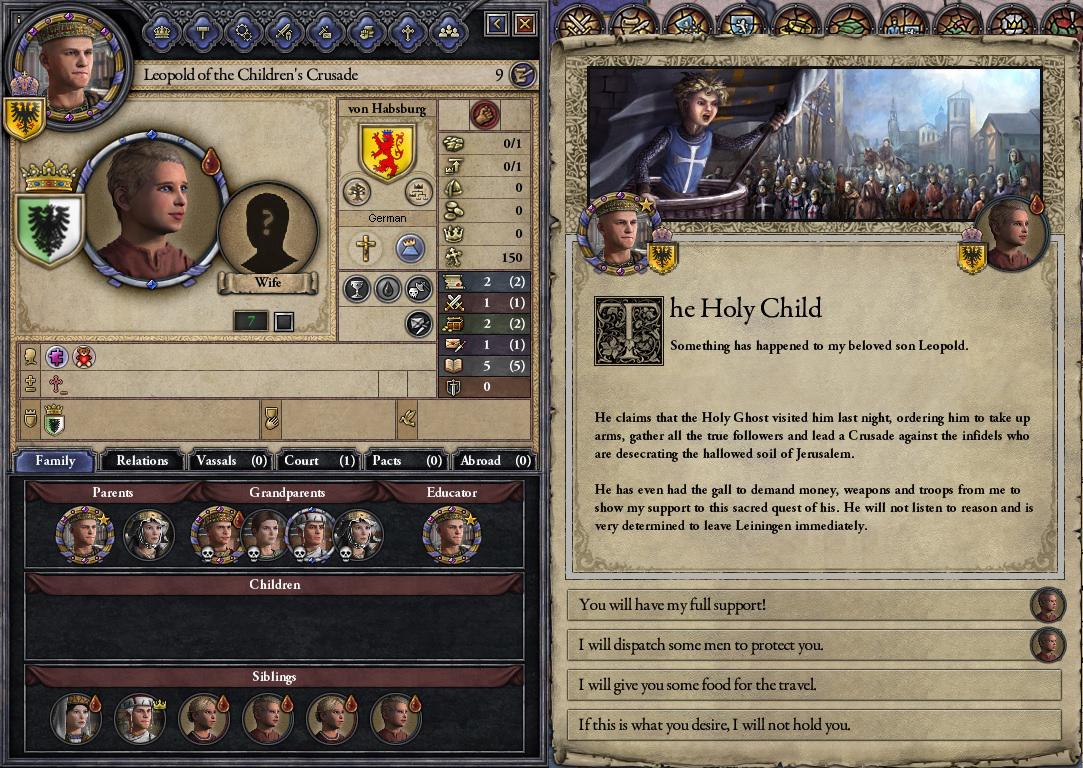 The Children’s Crusade will move from court to court, demanding troops and resources from local rulers, and gathering zealous commanders and disgruntled underage courtiers along the way.

As a ruler hosting the Children’s Crusade, you will be able to support or hinder their efforts, increasing the amount of troops and morale that they will receive once they reach Jerusalem, forcing their travel to a premature end, or, if you are feeling particularly virtuous, deciding to become their sponsor. 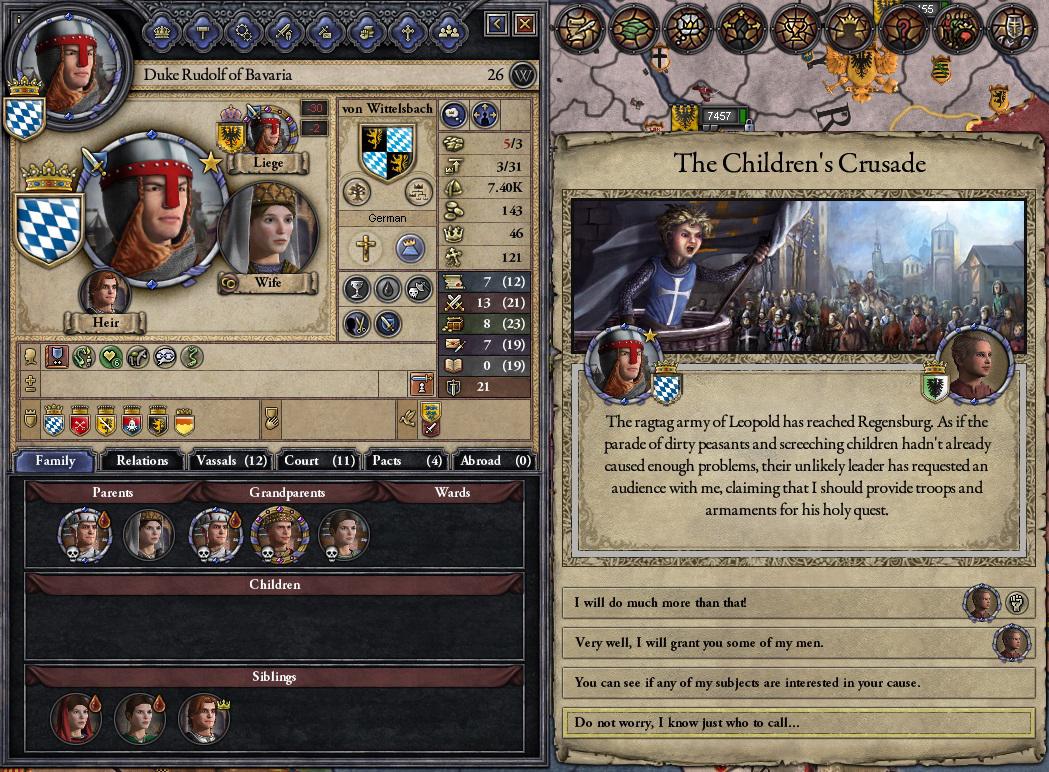 Becoming a sponsor allows a ruler to follow this special Crusade more closely, to invest in it on multiple occasions during its travel, and actively join the Children as allies in the war against the infidels if they manage to reach the Holy Land. 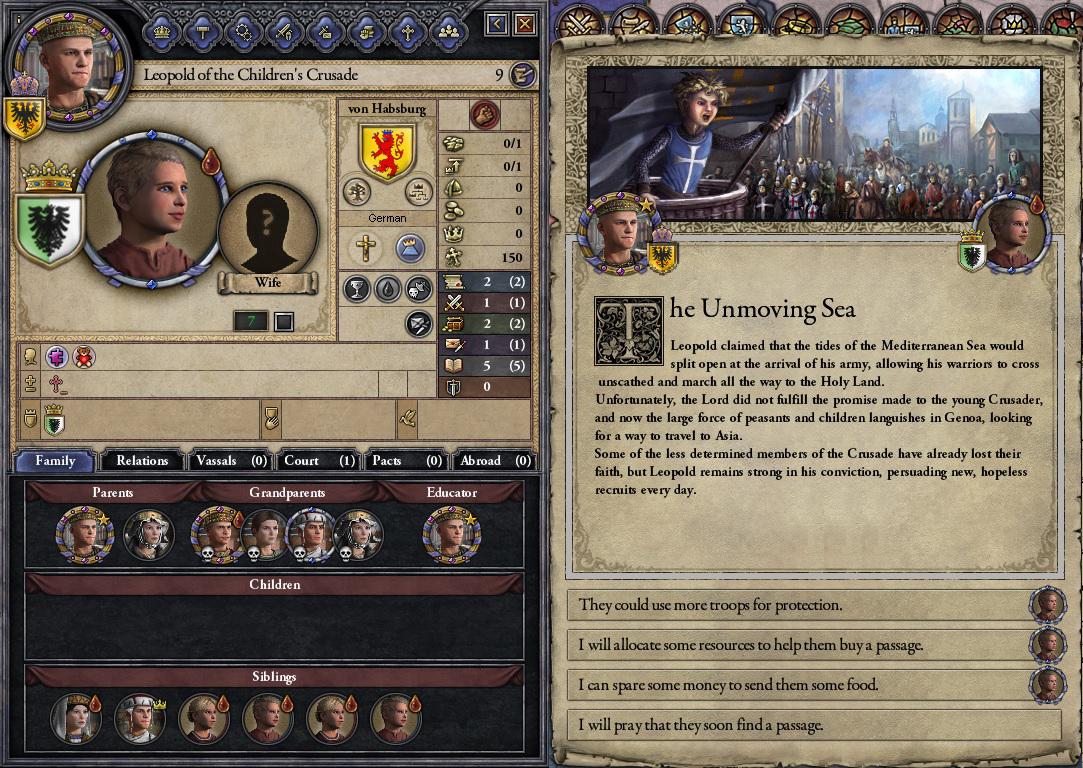 Once the Children reach their target, they will spawn an army whose strength, size and composition will change depending on how their travel went and declare war to the current holder of Jerusalem. In the unlikely chance that they succeed, the leader of the Crusade will take over, and convert and vassalize all the rulers in the area. 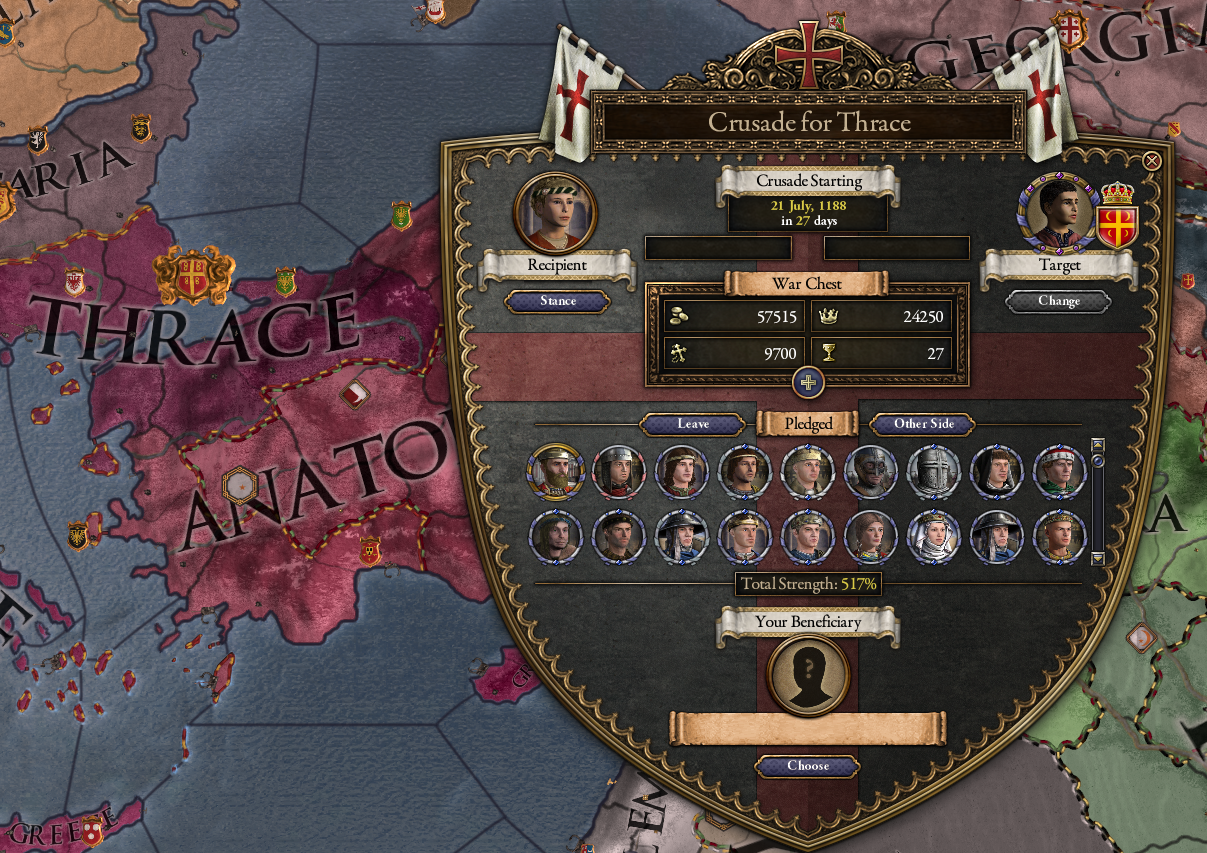 As some of you saw, one of our pictures for the Steam page for Holy Fury, was the Crusade for Orthodox Thrace. In other words, a set of Fourth Crusade events. These events have a chance to happen at every Crusade, if the Byzantine Empire is alive and doing well, holding the core lands of Constantinople.

A set of narrative events will happen, where a claimant for the Byzantine Throne will leave the court of the Emperor, and find a Catholic Merchant Lord to support their claims. With enough gold and the potential for plunder ahead, the Catholics will be swayed to change the course for Constantinople. 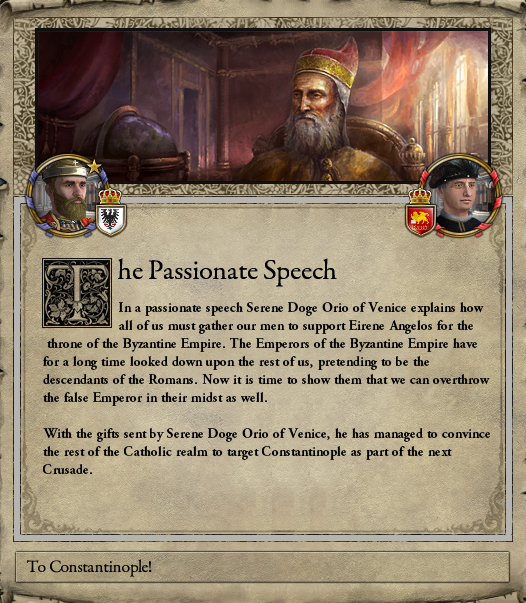 If the Catholics could come around, and actually win the Crusade against the Byzantines, there will not be a normal distribution of titles, but rather a special Fourth Crusade one.

First of, the Byzantine Empire will be no more. The old Emperor will relocate to any land outside of Thrace, if they had any, and get a temporary titular Empire title. The winner of the Crusade will receive the Latin Empire, taking the lands of Thrace, and a special bloodline. 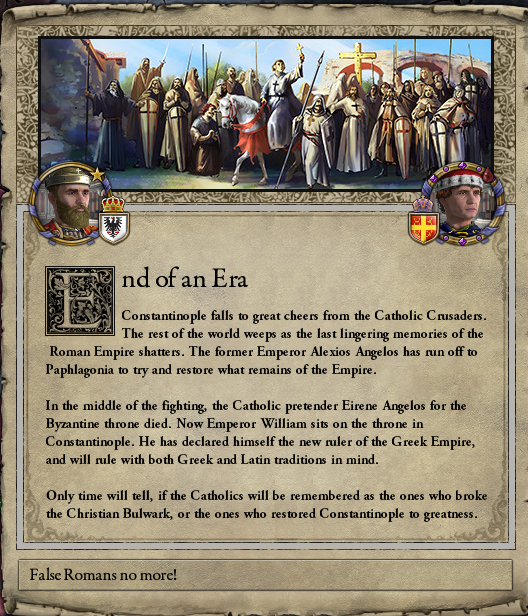 The old direct vassals of the Byzantine Empire will be freed. Any ruler of Trebizond might be given the Kingdom of Trebizond title, and there might also be another ruler taking up the King tier title, to simulate the Despotate of Epirus.

After the fall of the old Empire, a new decision will open up for Christians of the Byzantine Culture group, to restore the old Byzantine Empire. If you hold all of the core lands around Constantinople, and have a lot of prestige, you can restore the Empire and start recreating the Byzantium of old. Well… At least if you can remove those pesky Latins from the rightful Greek lands of Thrace. 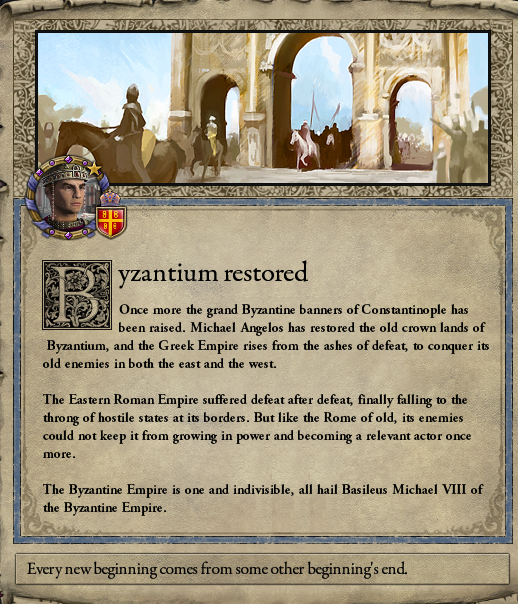 And of course, rules has been added for all the different kind of Crusades, so people are free to enable or disable them as they want.

That was all for this week! I hope you enjoyed reading about the rise and fall of- Wait… That’s wrong. The fall and rise of Byzantium, there we go!

Next week we will be talking about the Northern Crusade, and the Reconquista of Iberia. So I hope I’ll see of you for the final rogue Dev Diary of the summer!
Reactions:
Written by

I think Children's Crusade may be a little too bizarre in game, but I am looking forward to see how it plays out. Anyway, good to see Shepherd's Crusade finally come back!

Gorrammit, stop making me want to play a Catholic.
S

can we sales the girls of byz as the slave?
uknow it's for the historical accuracy, venice trader and arbic rich sultan love young foreign girls.
I think we should have the prisoner sales system, like the slave market and liverpool.
and not only for the liverpool, but also venice republic, nomad government.
it's a really important income for them in the history.
the prisoner of army will become the slave, venice trader like to sale them to the arbic.
there are many serf and villein and slave at that days, that's the missing part in the game.
not all the ppl are civil and free.
so what's bothering you guys?
Last edited: Jul 27, 2018

The Fourth Crusade sounds like it could be interesting. In a 'may you live in interesting times' kind of way.

Sounds like the kind of thing I'd enjoy observing from afar.

So Shepherd's Crusade will no longer happen if you have Sons of Abraham but don't have Holy Fury?
Toggle signature

aragonFTW said:
So Shepherd's Crusade will no longer happen if you have Sons of Abraham but don't have Holy Fury?
Click to expand...

It is entirely tied to SoA, you don't need Holy Fury for it. As it was something we originally sold with SoA, it would be unfair to resell it to people.
Toggle signature
Twitter: https://twitter.com/SnowCrystal_GD
B

Looks great! Will the Byzantine Remenants Get a sort of "Restoration" CB on the Latin Empire?

Given that the 'Mend the Schism' decision is still tied to the Byzantine Empire last I checked, will the ruler of the Latin Empire be able to do the same should they conquer the correct territories? It's a little frustrating that this isn't available.
Toggle signature
I can't wait to pay for everything in CK3 that I've already paid for in CK2.​

Shame that the Shepherd's Crusade can only happen after a failed crusade. It would be something if we had a crusade where both the shepherds, the children and the nobility started their own liberations of the Holy Land at the same time...

Sheperd's Crusade should aim for Syria/Antioch as well
And please, give a chance of said Crusade being the first one, without need of failure

Wonderful, absolutely wonderful. Will the original Byzantine claimant always conveniently die in battle allowing the Latins to take the throne? any other way to get rid of that claimant or even allow him or her to usurp the throne as originally promised for a large and regular payment.

Llyw olaf said:
Wonderful, absolutely wonderful. Will the original Byzantine claimant always conveniently die in battle allowing the Latins to take the throne? any other way to get rid of that claimant or even allow him or her to usurp the throne as originally promised for a large and regular payment.
Click to expand...