Jump to latest Follow Reply
Menu
Install the app
You are using an out of date browser. It may not display this or other websites correctly.
You should upgrade or use an alternative browser.
Stellaris 47176 Bug Reports 27253 Suggestions 16661 Tech Support 2614 Multiplayer 359 User Mods 4437 Stellaris AAR (After Action Reports) Console edition 1134
Previous dev diary Next dev diary
Show only dev responses
Greetings Earthlings!

Today’s dev diary is an important one, because it deals with something that makes Stellaris stand out, something that really defines the early stages of the game: the Science Ships. These bad boys are necessary to survey unknown planets and other objects in space, finding out which resources they contain and making sure habitable planets are actually safe to colonize. Although a Science Ship can operate without a Scientist character as captain, it is strongly discouraged because skilled Scientists are required to research many of the strange anomalies you will find out there... 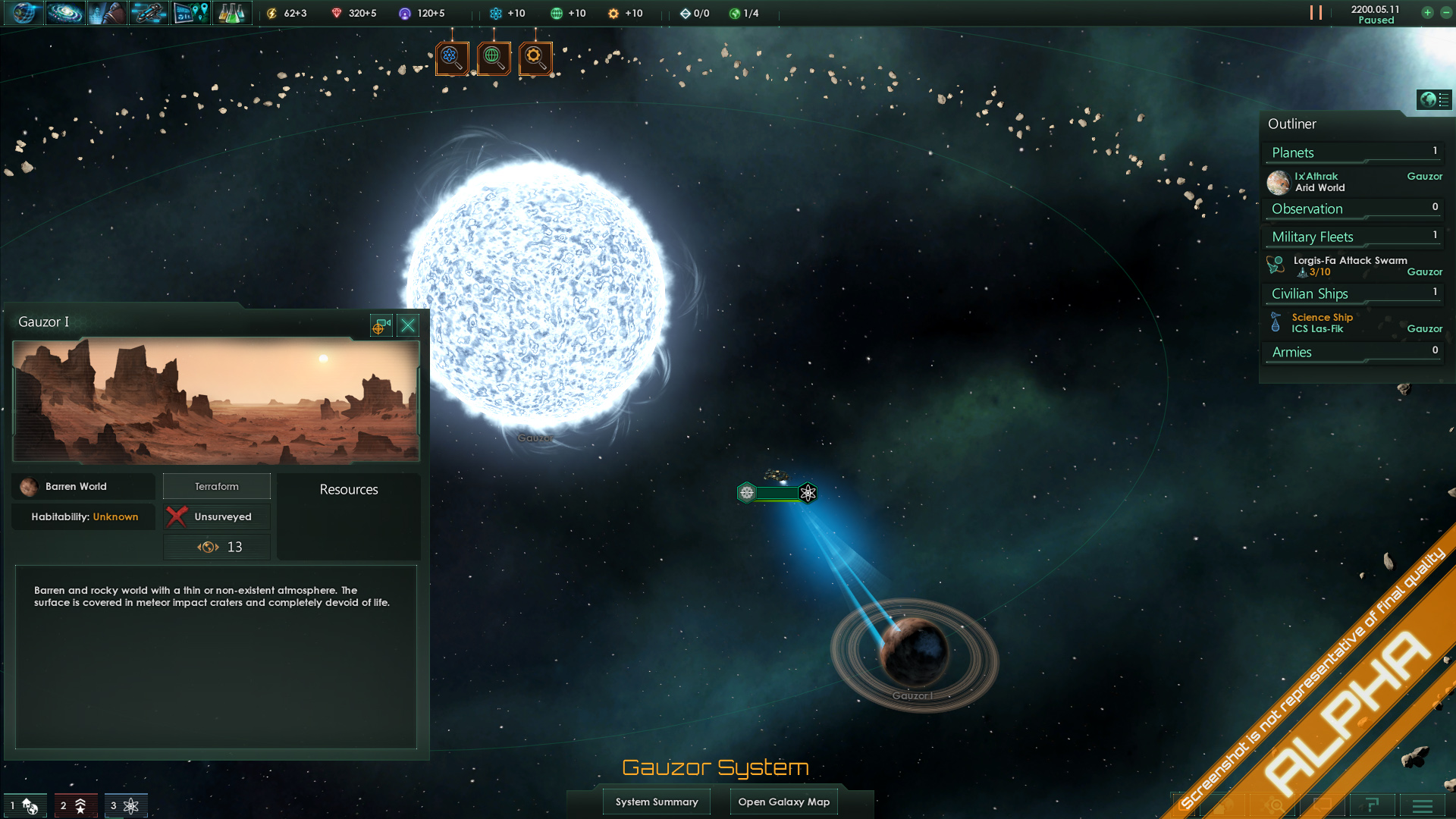 I like to compare these intrepid explorer-scientists with the questing heroes you might see in an RPG. They fly around the galaxy exploring, having little adventures, gaining experience and perhaps picking up some new personality traits. The galaxy is, after all, ancient and full of wonders. The way this works in the game is that when a Science Ship completes a survey, it might uncover an Anomaly of some sort. Each Anomaly has a difficulty level, so you often want to delay researching some of them until you have a Scientist with a high enough skill. Researching an Anomaly takes time and may result in success, failure, or, sometimes, catastrophic failure… For example, if the Anomaly consists of some strange caves on an asteroid, the Scientist could find out their origins and learn something of value, come to a wrong conclusion (the Anomaly would then disappear forever), or accidentally trigger a fatal explosion which might knock the asteroid out of orbit and put it on a trajectory towards an inhabited planet. 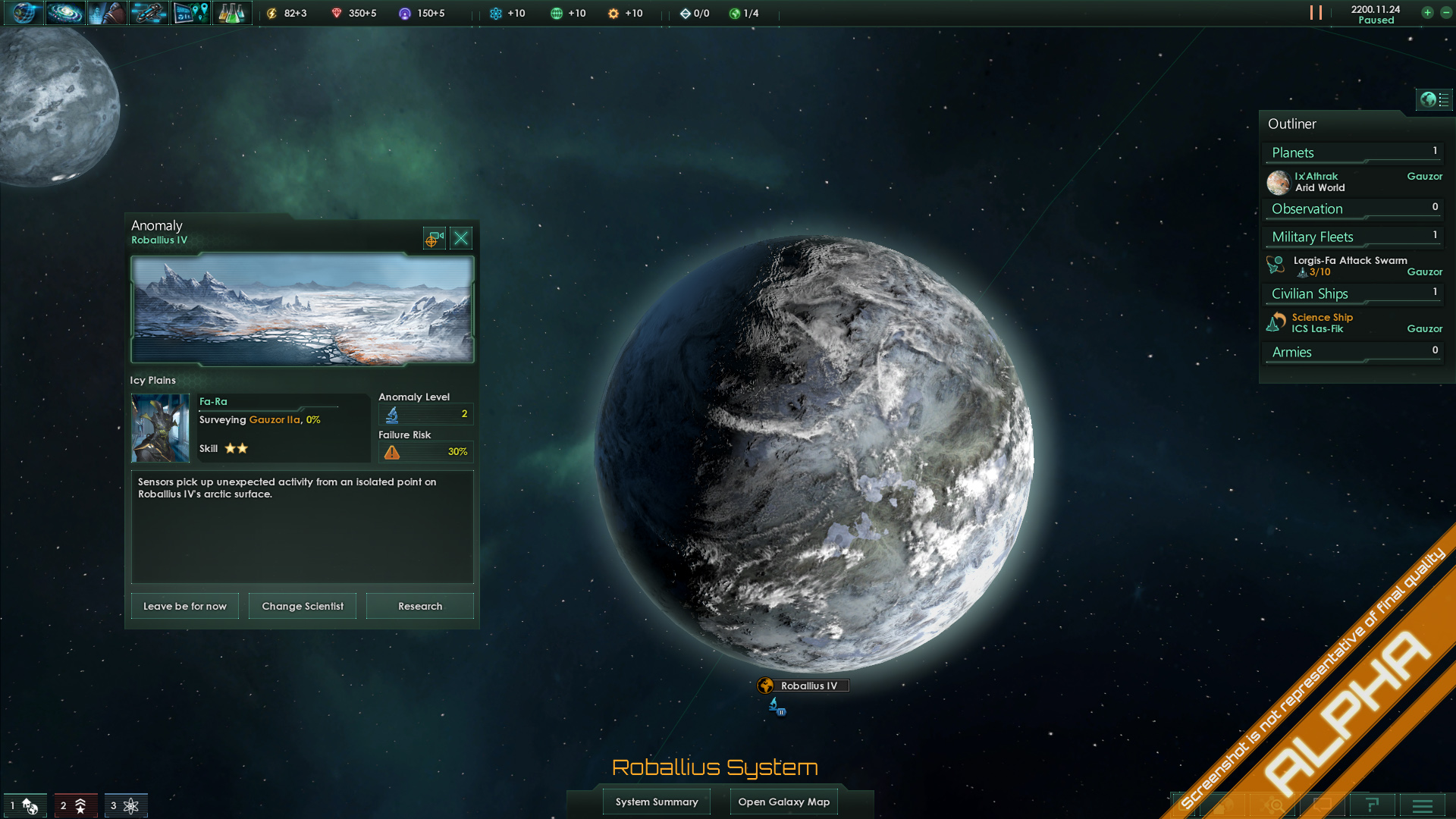 Anomalies are thus quite like little quests, and usually require some player choices (exactly like the “events” you’ve seen in our other games.) Some options are only available under certain conditions. For example, a special option might require that the Scientist or empire ruler has a specific personality trait.

The biggest challenge we face when writing these Anomaly events is to provide enough variation that players keep getting surprised even after several complete playthroughs. Therefore, we work with rare branches and having multiple start and end points, so that you might initially think you’ve seen the Anomaly before, only to find that this time it plays out differently...

There are other important tasks for Science Ships as well; they are required for many special research projects and for analyzing the debris left behind after a battle, perhaps managing to reverse engineer some nifty technologies (the subject of a future dev diary…)

That’s all for now folks! Next week Henrik "GooseCreature" Eklund will talk about the “Situation Log” and special research projects.
Last edited by a moderator: Jan 28, 2016
Click to expand...

Yeah! Science Ships!
That souds absolutly amazing!
Toggle signature
One Game to rule them all, One Game to find them,
One Game to bring them all and in the darkness bind them
In the Land of Paradox where the playtapi lie.
Reactions:

Great!!!
Toggle signature
Ignore my status — it is merely a relic of the past

How will you make sure the player has a meaningful choice in these events, without an either an optimum option or it just becoming a random result
Reactions:

I love the planet view and I see a terraform button Awesome!
Reactions:
G

"accidentally trigger a fatal explosion which might knock the asteroid out of orbit and put it on a trajectory towards an inhabited planet"
Every time science ships/reserch have been mentioned this seems to be mentioned as well (care to variate? This is the most stated event of the game). I don't min there being catasrophical results of reserch missions but this one feels rather... artificial. I have hard to imagine how a reserch mission would "accidentally trigger a fatal explosion", especially on the magnitude to displace an entire astroid orbit, and especiall that of all places that asteroid would end up going it would be to one of our planets.

Maybe come up with some better "catasrophical failures"? Suggestions (just to get a disscusion going):
- Wrong conclusion could lead to dead ends in reserch, when this is discovered later on you have wasted a lot of resources on nothing. (like a quest chain, the player is tempted by what the npc resercher say is great progress, put effort into the project and ned the end it might just fail).
- Might find sites that another race consider holy, triggering diplomatic crisis when they consider the site defiled.
- You Lv much resercher might die. Or maybe be corupted.
- Contract some new parasitic life form, maybe causing some local epedemic if not handled properly.

Thanks again for another dev diary

I see there is a nice little "Terraform" button Care to spill a bit about Terraforming, because I heard that Terraforming won't be in the game?

Will my scientist come to the conclusion that the moon is made of green cheese?
Toggle signature
Arise King Kronos, bastard of the void.
His enemies fled, their eternal dark serenity destroyed.
Reactions:

Paradox will troll us again. Investigating anomalies will be the Stellaris version of 'comet sighted'!
Toggle signature
Arise King Kronos, bastard of the void.
His enemies fled, their eternal dark serenity destroyed.
Reactions:

Really nice that option to terraform a barren world.
Click to expand...

The button is disabled though, Currently Barren planets cannot be terraformed
Toggle signature
Ask nicely, and I will see what i can do.
Reactions:

Aerie said:
The button is disabled though, Currently Barren planets cannot be terraformed
Click to expand...

Means.. with you current tech or in the current state of the game?
Toggle signature
One Game to rule them all, One Game to find them,
One Game to bring them all and in the darkness bind them
In the Land of Paradox where the playtapi lie.
Reactions:
N

It does sound interesting- age of exploration, and all that- somewhere between the voyage of the Beagle and of the Enterprise.

On the other hand, I am slightly worried about how requiring characters to investigate things is going to interact with the limited number of characters allowed to a nation.
Reactions:

so scientists have a dual role? surveying and investigating anomalies. is it possible that after a plant has been surveyed an anomaly is detected?
Toggle signature
Soon to be a Major religion near YOU!

Probably cannot be terraformed due to tech at that point in the game.

Can we build our own planets (assuming the appropriate larange points are available)?
Toggle signature
Arise King Kronos, bastard of the void.
His enemies fled, their eternal dark serenity destroyed.
Reactions:

Science ships demand science officers.... Commander Spock will be in his element!
Reactions:

I hope that terraforming barren planets is possible. Otherwise, why have terraforming at all, since what would you want to need it for most other than a barren planet?
Toggle signature
"MUGANI DESU KA, ONI-CHAN ❤ ? HAKU HAKU HAKU~ "
-Late Game Crisis-chan
Reactions:

Kuschelflummi said:
Means.. with you current tech or in the current state of the game?
Click to expand...

Current state of the game
Toggle signature
Ask nicely, and I will see what i can do.
Reactions:

And let me guess, what is the effect of having an asteroid heading towards one of your inhabited worlds?