Jump to latest Follow Reply
Menu
Install the app
You are using an out of date browser. It may not display this or other websites correctly.
You should upgrade or use an alternative browser.
Crusader Kings II 69635 Bug Reports 19693 User Modifications 10528 Suggestions 5969 Tech Support 6340 After Action Reports
Previous dev diary Next dev diary
Show only dev responses

Hey! So today we will talk about some mechanics we’ve added to make other rulers react to what happens in the world. We want to slow down the snowball and prolong the time it takes to conquer the world, so it shouldn’t be as easy to do. Snowballs are pretty evil, just like medieval rulers.

Infamy is limited to be within the range of 0 to 100% and will slowly decay over time based on how strong your max military potential is. When you hit 25% infamy, coalitions will be unlocked and AIs will start joining them based on how threatened they feel.Your infamy will serve as a hint on how aggressive and dangerous other rulers think your realm is. You gain infamy primarily by conquering land through war or by inheriting a fair maidens huge tracts of land.

The amount of Infamy you gain is based on the action you do, how much land you take and how large your realm already is. So for instance the Kaiser of the HRE declaring a war for Flanders and taking it is going to make the neighbours more worried than if Pomerania manages to take Mecklenburg. 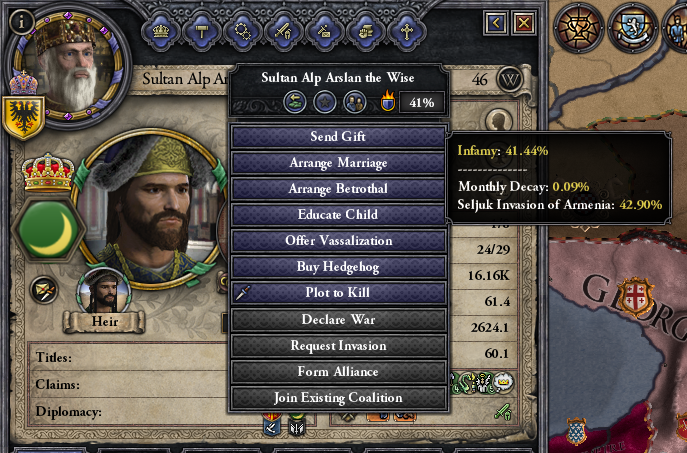 Coalitions themselves are mostly defensive in Crusader Kings, if any member gets attacked by the target of the coalition they will automatically be called into the war. If a member starts a war against the target they only get a normal call to arms which they can choose to decline.

For an AI to join a coalition they will consider the relative strength between the target and themselves, how threatened they think they are and how much infamy the target has accrued. You can view the current coalition someone has against them by the diplomacy field on the character screen. 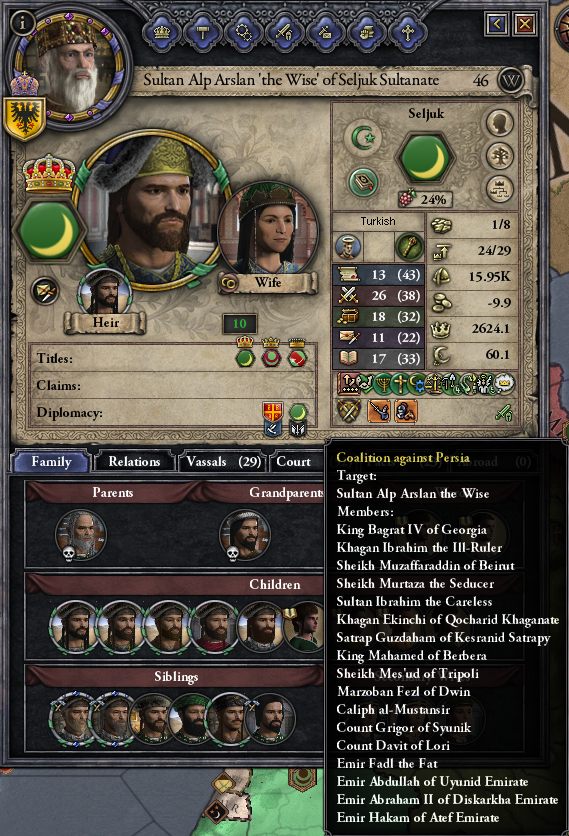 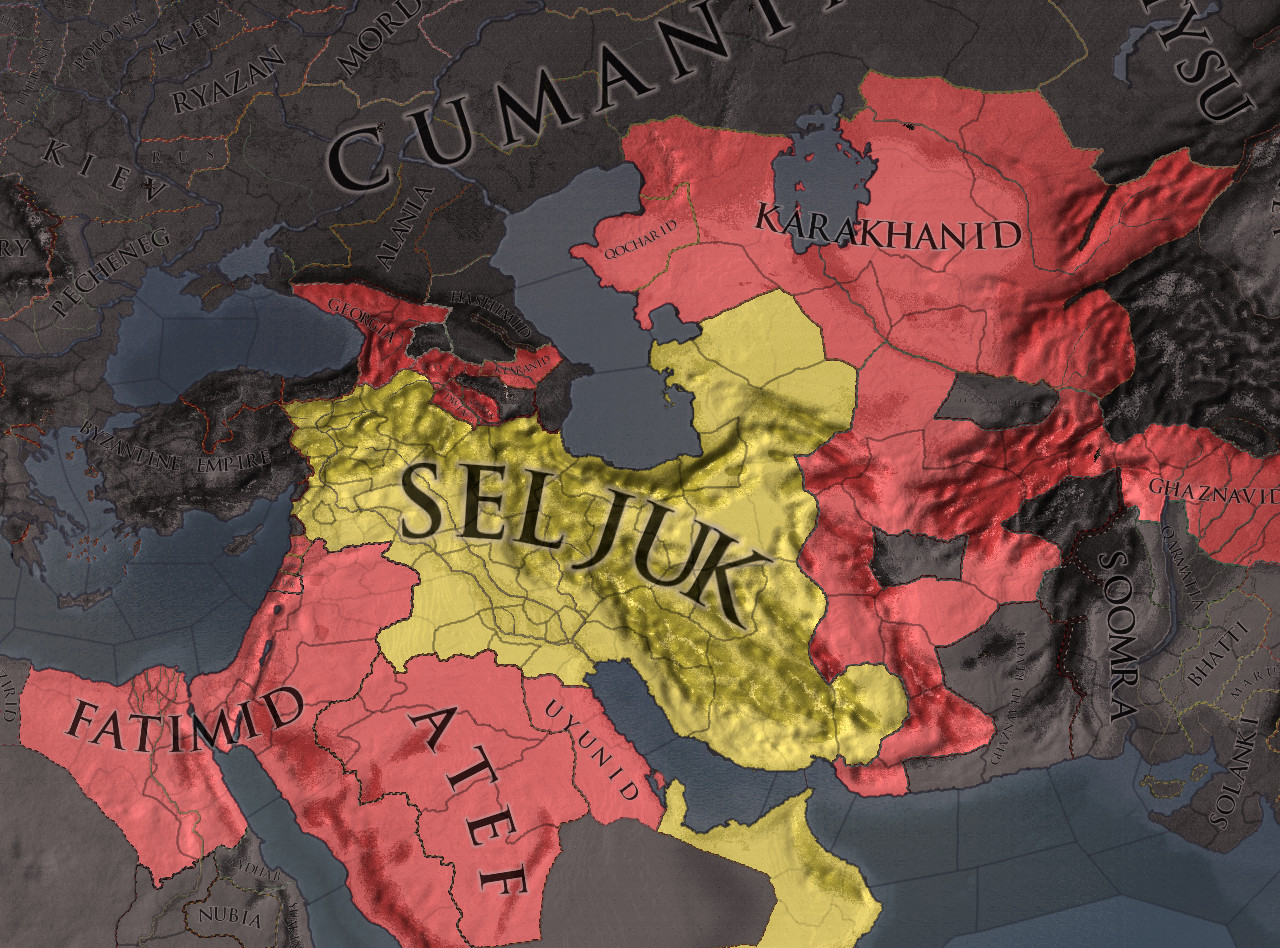 I have a question. Does this infamy only apply to your ruler, for example if you do a crusade and take all of Mesopotamia, and then the next day your ruler dies, do you start with 0 infamy (unless your heir did some conquering alone)? Also, if your vassals go conquering outside your realm do you get any AE from them?
Reactions:

If a vassal conquers stuff outside the realm you gain 50% of the infamy he generates. (this propagates up so if a count of a duke conquers something, the duke gets 50%, the king 25%, the emperor 12.5%)

And no, Infamy stays over generations. You can't be a dick then die and think you will get away with it.
Toggle signature
That'd be Groogy. He's kinda like the King Joffrey of these forums, toying with us for his own sick amusement. - DominusNovus
The Groogy is an elusive and magical creature. You do not find the Groogy, the Groogy finds you. - Enlil
I thought he was just created in a lab - Viking

This is grand.
Reactions:

Is that a new button there beside the star?
Reactions:

Will certain CB's raise infamy more than others?
Reactions:

Can coalitions only be formed against independent rulers or can they also be formed by vassals of a realm who worry about that colleague ambitious duke that is gaining a lot of titles in rapid succession?
Toggle signature
"'Alea iacta est''
Reactions:

Interesting. How will this impact scripted conquerors like the Mongols? Will they receive bonuses to Infamy reduction, or just essentially ignore it due to their strength?

Groogy said:
You can't be a dick then die and think you will get away with it.
Click to expand...

How did you know what I had planned for real life?
Reactions:

Groogy said:
If a vassal conquers stuff outside the realm you gain 50% of the infamy he generates. (this propagates up so if a count of a duke conquers something, the duke gets 50%, the king 25%, the emperor 12.5%)

And no, Infamy stays over generations. You can't be a dick then die and think you will get away with it.
Click to expand...

Do Crusades/Jihads/Great Holy Wars give you infamy if you win the war target, given to everyone who participated, or to the religious head?
Toggle signature
A (civic) nationalist and center-left American.
Reactions:

I'm sure I'm not the only one who thinks the Buy Hedgehog button needs to be removed. It's just way too gamey for a rich Emperor to be able to hammer away at the Buy Hedgehog button until he has an impenetrable wall of spiky cuteness. The button needs to be replaced with a Seduction focus event chain, where the number of hedgehogs you attract scales with the total egg production of your realm.
Reactions:

This is an awesome and most welcome addition!

Yet I think there should be "negative infamy hits" everytime a ruler dies. Successions are always troublesome, and this might be a good and interesting trade-off to add to the game!
Toggle signature
Goodbye CK2! My endgame screenshots for all sixteen Monarch Journeys, with brief commentary (micro-AARs).

This can be very, very bad. I will see how it turns out in actual gameplay though.
Toggle signature
CKII: The Four Nations - An Avatar: The Last Airbender Mod (out now!)
Reactions:

Is Infamy a global value? If so, how does the AI handle it? Will France join a coalition with the Fatimids if the HRE gets Jerusalem and then oppose holy wars in the Middle East?
Toggle signature
You must become king. Of everything. - From the Diagram, Tenets of Instruction, Back of the Footboard: paragraph 1

This seems great, just one thing, don't have less coalitions on easy. Less coalitions make the game easier since it's a lot less likely that your enemies will blob out of proportion.
Toggle signature
Baal: You can't be serious.
O'Neill: Yes I can... I just chose not to.