Jump to latest Follow Reply
Menu
Install the app
You are using an out of date browser. It may not display this or other websites correctly.
You should upgrade or use an alternative browser.
Crusader Kings III 15194 MP Open Beta Feedback 25 Bug Report 10229 Tech Support 1417 Multiplayer 126 User Mods 1421 AARs (After Action Reports) Suggestions 4167
Previous dev diary Next dev diary
Show only dev responses 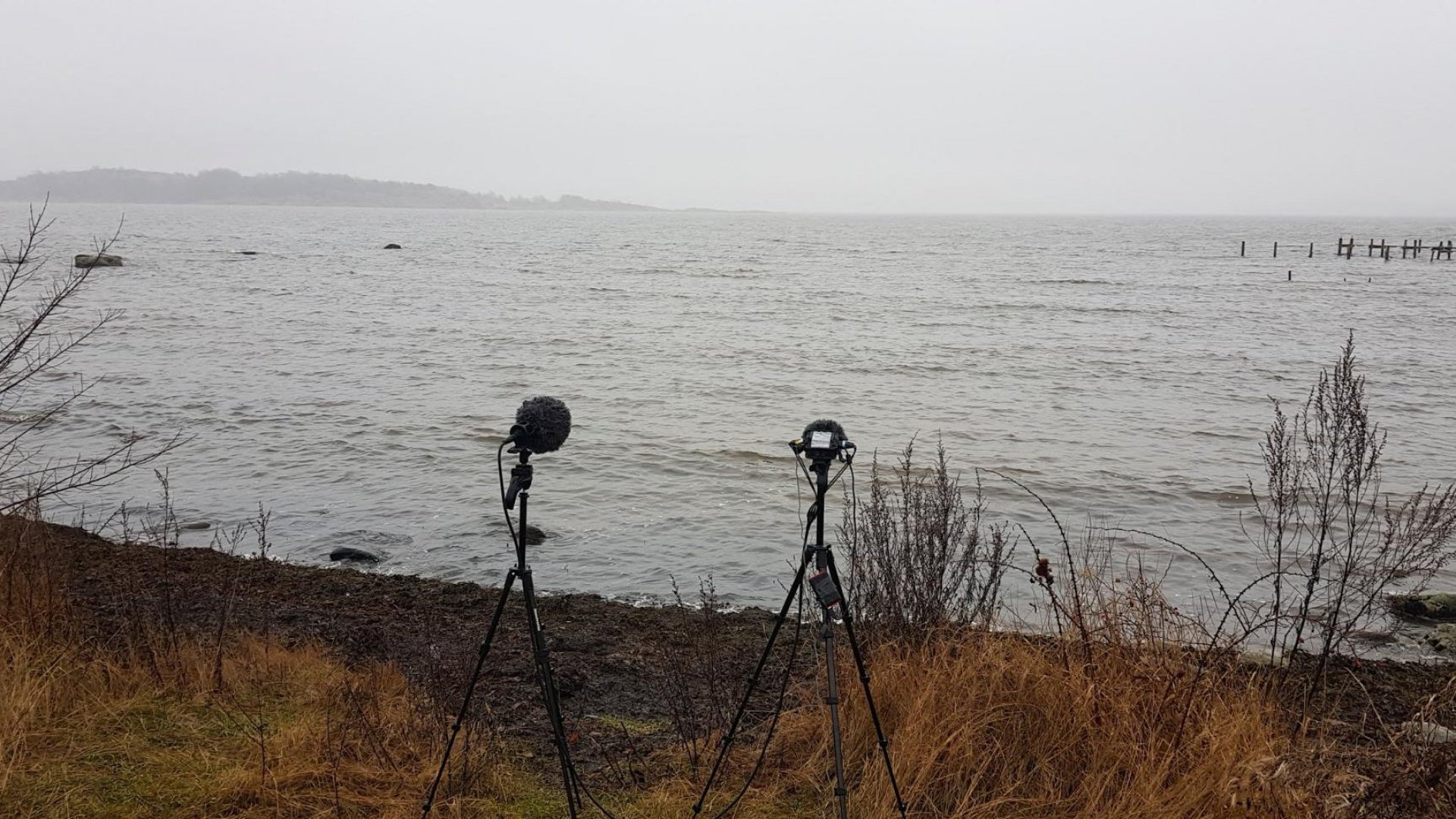 Welcome to another Dev Diary from the Audio Department! Now that Northern Lords is out in the world, we can share some behind the scenes on what went on during development for the Flavourpack.

We are going to talk about Field recording, The Sound design of the Event Images, some 1.3 patch updates, and of course, the music from Andreas Waldetoft.

So if that is your cup of tea (or mead), then be our guest and follow along in this Dev Diary!

SFX
Field Recording:
We decided early on in the production that we wanted genuine ambiences for the event backgrounds, which meant that source recordings were required.
The recordings were conducted over a span of two days in a cold desolate “Vik” (Bay area) in the west coast called Onsala as it is currently known (Coming from “Odin's Sala” which translates to “The Halls of Odin” in Viking times) Which is my home area where I grew up.

First of all, is preparation, what do you need for the recording session, and how light do you need to travel? (You don’t want to carry an entire audio studio on your back if you are tracking through forests and fields. Light is fast, and your back will thank you).

I ended up using two handheld recorders, some lightweight stands, and an Ambisonic Microphone (a 4-way microphone array that captures audio in all directions, not unlike a VR camera, but for audio)

That way I can position the location in post-production, and not worry if I did or didn’t capture something outside the audibility of a regular microphone.

During the pandemic, there were minimal planes, cars, or any activity for that matter, which made it ideal for recording audio. it was just me, nature, and my recorders.

Placing yourself among Vikings wasn’t hard at all, and at times almost serene. Listening to the waves roll in on the shores is something quite special and I highly recommend it, if you can spare the time.

Event-images
After the field recording was concluded, the source material was processed and implemented to be the backgrounds for the event images that appear in the Northern Lords Pack.
Each event image has a unique evolving loop that places you right in the center of the area. Whether it is out on the windy ocean, the stone pebbled shore, or in a pigsty prison!
Videos of the different event images in the game during development:


All of these are crafted in our sound design tools and then “performed” by Fmod.
It can scatter the birds you hear, the insects that pass you by, or how windy the ocean is. All to make each event appearance as unique as possible, while still being in the same “space”.


Map Ambience
As part of the 1.3 update patch, winter now affects the map, and so does the audio, as shown in Dev Diary #49: A cold Embrace. Have a look at how the Winter sprawls with heavy snowstorms, and how the audible townspeople disappear from the outside and into the hearths and the warmth.

We also updated the ambience system to a procedural system. That we call the
Map Ambience System. (Highly technical terminology at play here)

It is driven by the game camera, that scans the terrain of all visible provinces, determines what amount of a specific terrain type the camera can see at any point in time, and generates a percentage value that then gets translated into a Fmod parameter that is connected to the Master Ambience Event.

All this fancy talk boils down to, rather than us having us placing hundreds of audio emitters on the map at strategic locations (we did, and let me tell you, that is labor-intensive!) The game tells the audio middleware (Fmod) what to play, when, where and how much.

And now, over to Andreas, our Senior Music Composer!

In this Flavourpack, we recorded authentic old instruments from the time era, like the lovely Mungiga (translates to Mouth-Harp or Jaw-Harp) different kind of flutes, Swedish bagpipes, fiddles such as a Keyed Fiddle and Hardanger Fiddle, a Throat singer and not to forget a Viking Choir singing in Norse.

Recording anything in a pandemic is not an easy feat, especially with varying amounts of lockdown, for example, Kalabalik, our medieval session musicians and skalds for hire, did a fantastic job recording themselves from a home setting. Below are some images of the instruments that made an appearance in the score: 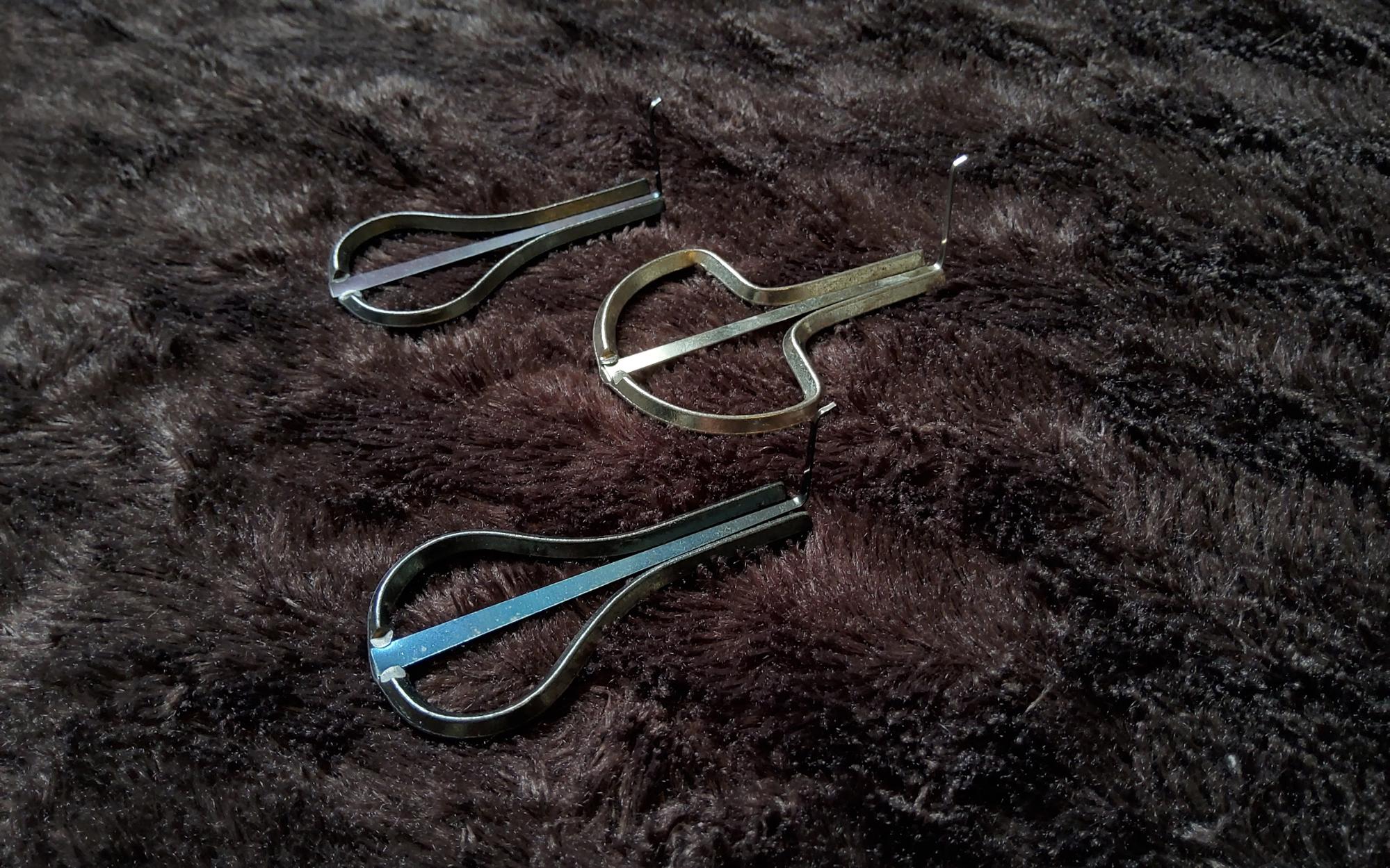 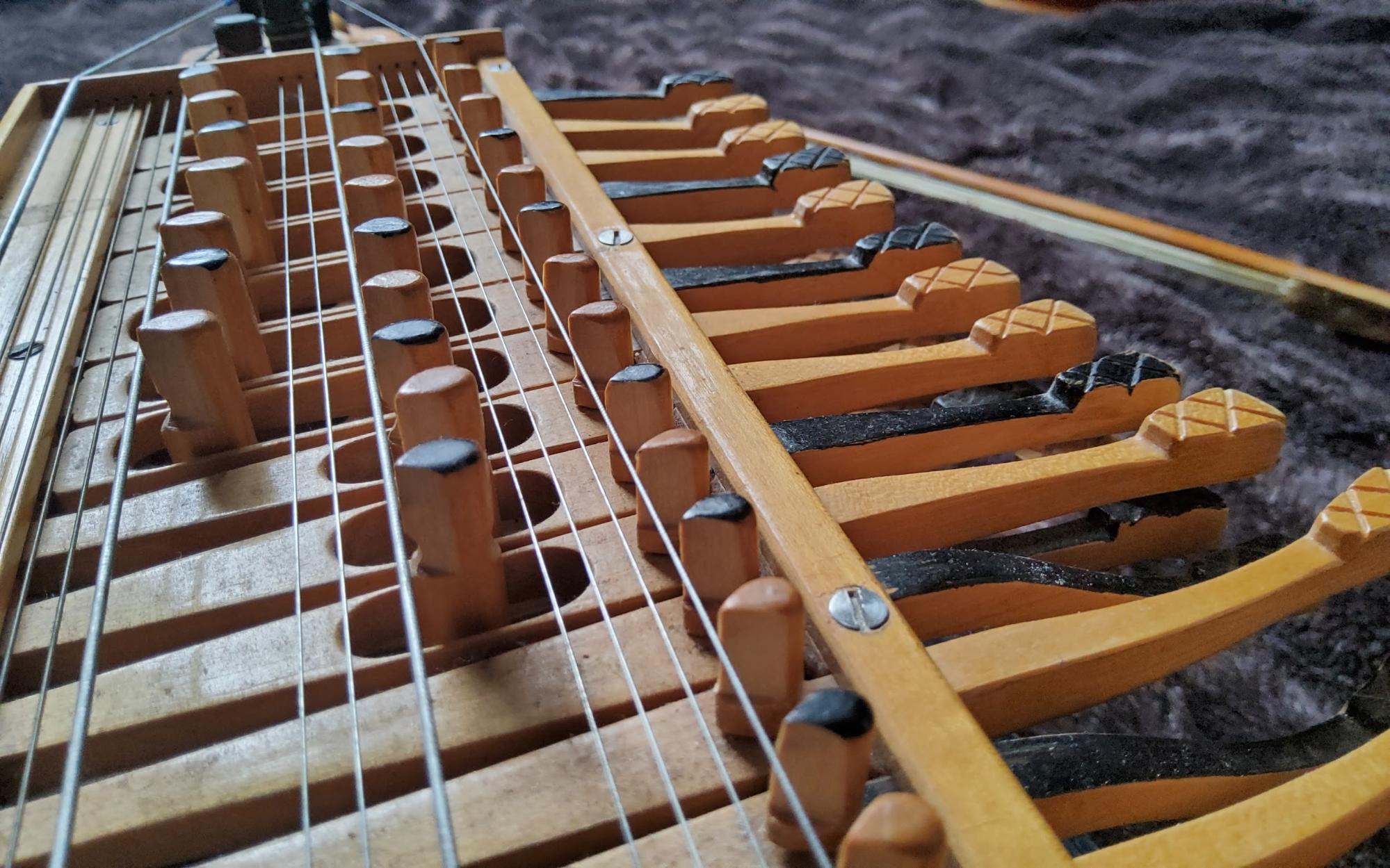 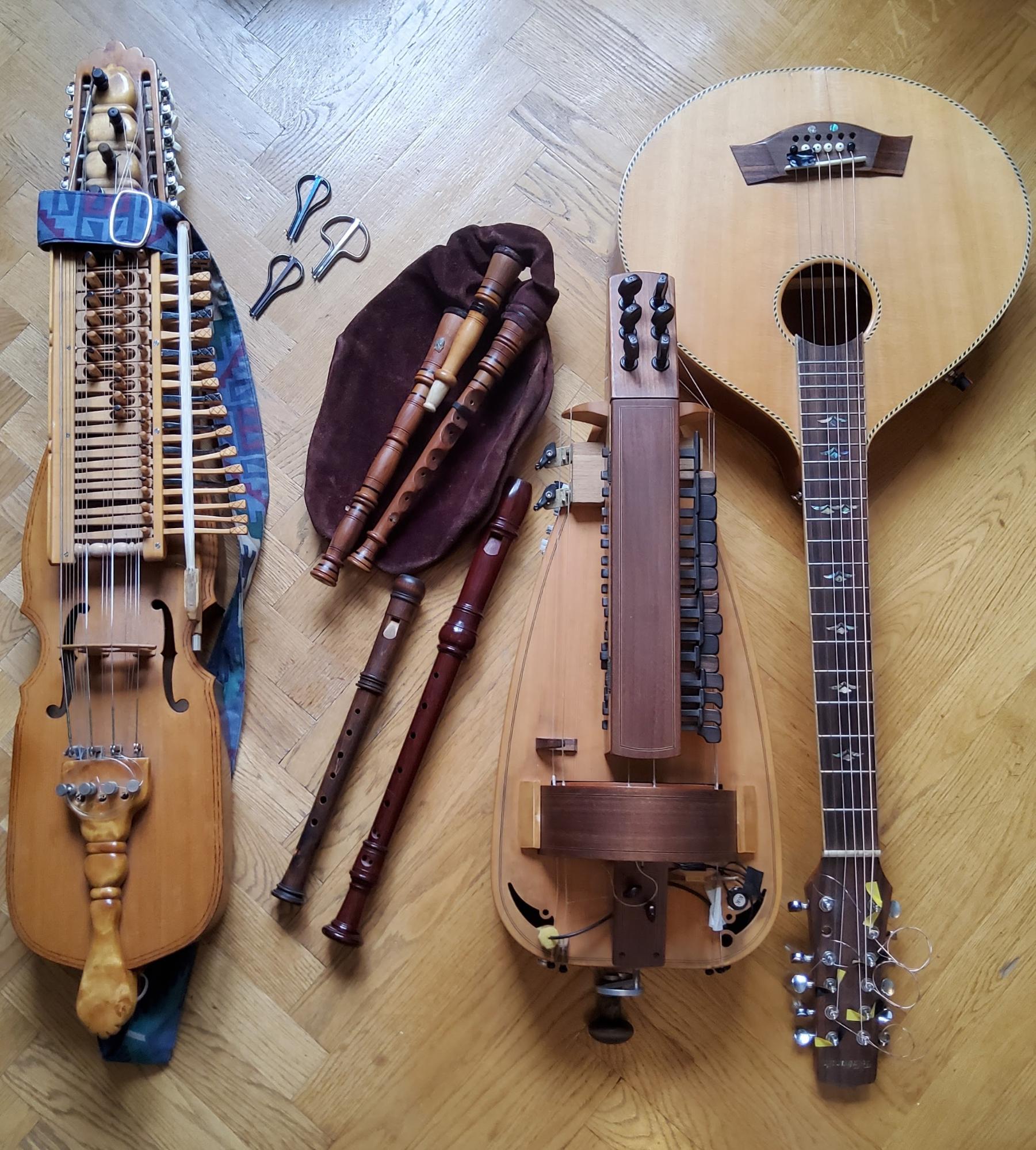 Picture 3: Overview of some of the live instruments included in the soundtrack

We are all so happy and grateful for the result and prove that music can be done anywhere, and what matters is that the soul of the music is there.
What you as the player will hear are Three new mood tracks called Drakkar, Scandinavia, and The Feast and One new cue track called The Raid.
The nifty thing with our music system is that both Scandinavia and The Raid have different versions that vary between themselves, so there will be variations that play intermittently during a game-session.

I'll leave you all with this, The cue called The Raid. Enjoy!


That is all from us in the Audio Department, until next time!
Last edited by a moderator: Mar 30, 2021
Reactions:

Marvelous, this is all music to my ears!
Reactions:

Speaking about the music - will there be a Soundtrack DLC collecting all the tracks in MP3/Flac format? (Just as we have one for I:R).
I'll be happy to pay for it even owning Royal Edition.
Reactions:

All the new audio effects are awesome! However, it will be really cool to know anything about future bugfixes. Obviously, there is no date set in stone. But it will be good to know whether we can expect another one during Northern Lords phase (let's call it 1.3.2) or not - and have to wait until the next DLC and 1.4.0. Maybe a community manager knows something ?
Reactions:

Would really love to get these new tunes on Spotify
Toggle signature
да, sir President.
Reactions:

Keep doing what you guys do. I've still got the holy war music in the back of my head.
Reactions:

The effort that has gone into creating an historically-informed ambience is just amazing. Truly a pleasure. Thank you for your efforts, ladies and gentlemen!
Toggle signature
My username is the closest the forum allows to Seek Truth From Facts or in Mandarin: 实事求是​
Most serious HoI4 bugs: Japan & US don't make CV planes [fix in progress] | Straits crisis makes Bosphorus porous | Ironman players can have their tag switched
Easier bugs suitable for the HoI4 War Effort: Typo increases cost of turret conversions | Unit medals cost miscalculation | Typos stop decision icons showing
Reactions:

It still amazes me that at some point someone at PDX said something along the lines of "You know what our games are lacking? A soundtrack that puts most AAA titles with 100+ million budget to shame!" and they just run with it ever since.
Reactions:

It's lovely to hear about how the less obvious work that is behind CK! Great attention to detail!
Reactions:

Personally this doesn't interest me in the slightest, really dont care how the sound was made, more interested in the next steps for the game. Thanks for the DD anyways its better than nothing.
Reactions:
D

barny said:
It still amazes me that at some point someone at PDX said something along the lines of "You know what our games are lacking? A soundtrack that puts most AAA titles with 100+ million budget to shame!" and they just run with it ever since.
Click to expand...

Or they just had Andreas and he did his thing.
Reactions:

ParadoxGustav said:
As part of the 1.3 update patch, winter now affects the map, and so does the audio
Click to expand...

The audio affects the map?
Toggle signature
if you don't advertise your radical [RANDBETWEEN(left | right)]-wing political leaning in your sig, are you really a paradoxian?
Reactions:

Interesting DD, I had no clue how much work goes into the sound

Small side note, you might want to fix the link at https://pdxint.at/3wdVmD1. It points at the last DD, #53, rather than this one
Reactions:

WhapXI said:
The audio affects the map?
Click to expand...

Oh no, that is me being silly with grammar it seems. I meant to type that the map affects the audio representation. Whups!
Reactions:

Really impressive work. The new music and ambient sounds really work at putting you in the region, and I'm impressed with the lengths you take towards creating something that feels authentic.
Reactions:

KuwabaraTheMan said:
Really impressive work. The new music and ambient sounds really work at putting you in the region, and I'm impressed with the lengths you take towards creating something that feels authentic.
Click to expand...

SeekTruthFromFx said:
The effort that has gone into creating an historically-informed ambience is just amazing. Truly a pleasure. Thank you for your efforts, ladies and gentlemen!
Click to expand...