Jump to latest Follow Reply
Menu
Install the app
You are using an out of date browser. It may not display this or other websites correctly.
You should upgrade or use an alternative browser.
Crusader Kings III 14936 MP Open Beta Feedback 26 Bug Report 10055 Tech Support 1359 Multiplayer 118 User Mods 1387 AARs (After Action Reports) Suggestions 4074
Previous dev diary Next dev diary
Show only dev responses
Greetings!

Today is the release of Northern Lords, and with it the free 1.3 patch that we’ve dubbed ‘Corvus’ in honor of Odin’s ravens! We’ve teased parts of the patch notes in previous Dev Diaries, but this time we’ll post them all - roughly 13 pages of changes and fixes, and this time there won’t be any omissions or [REDACTED] text!

There are some notable free additions we’ve not mentioned yet that we’d like to show off! Most of them would have been dead giveaways for the theme of the Flavor Pack, but as Freya’s cat is out of the bag now - let's get to it! 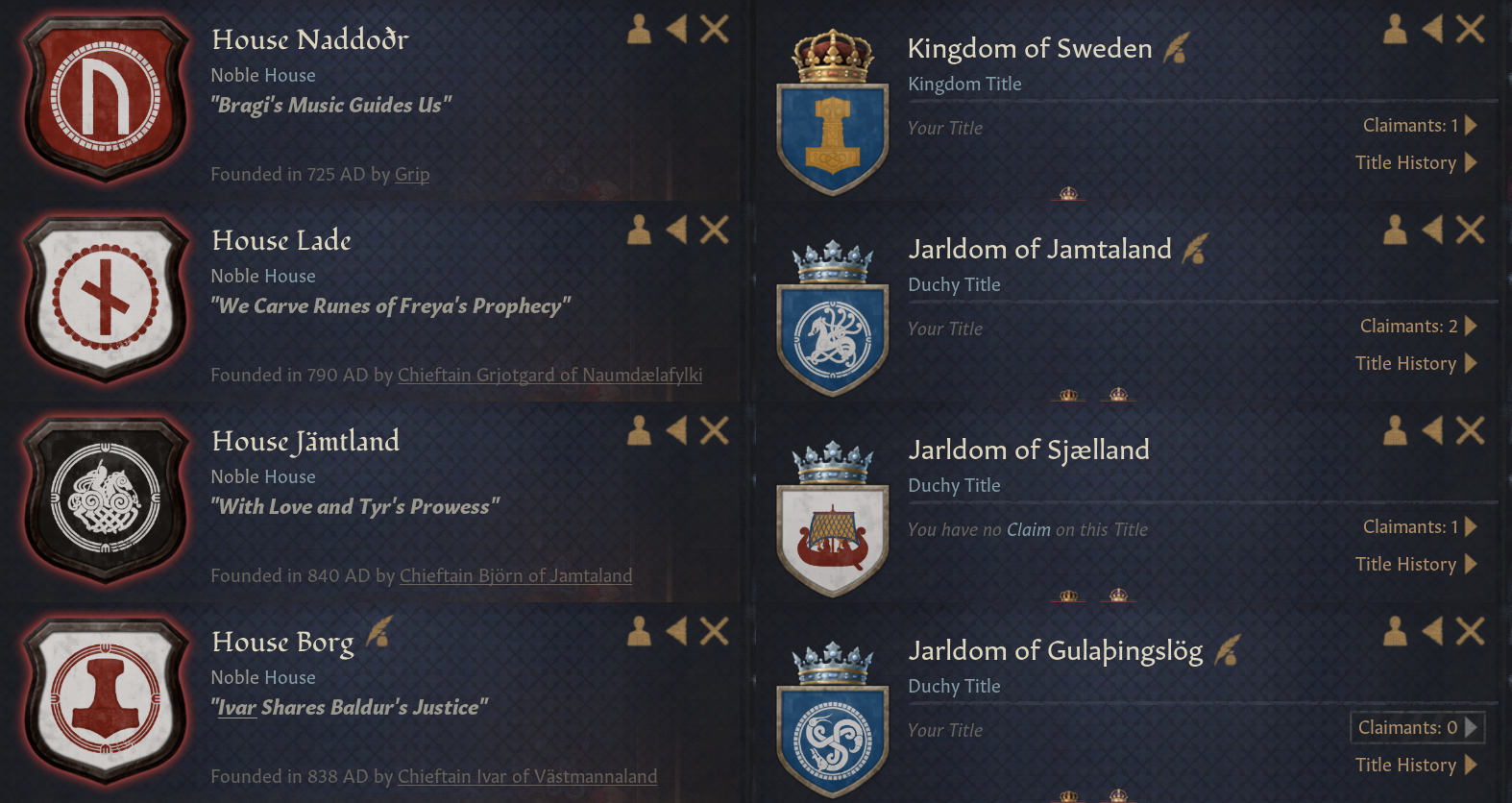 [Image: Norse CoAs and Mottos]
We’ve added numerous new Coat of Arms elements for the norse to create even more variation! Worth noting is that most titles in Scandinavia will dynamically switch which CoA they use based on if the holder is pagan or not.

There’s also a slew of new Norse mottos that refer to their pantheon of gods (the traits of the founder of a house heavily determines which one they pick).

[Image: Custom Faith Icons]
There are some new Norse-themed Custom religion icons for you to choose from when creating a new Faith, some which draw inspiration from other religions - something that might suit a faith created by a Norse ruler that’s left their home far behind!

[Image: Special Buildings]
We’ve added several new Special Buildings to Scandinavia and Eastern Europe - the full list is in the patch notes, but here’s three that start as constructed in the 1066 start date.

[Image: Chin Goatee pic]
While restructuring the genetic system for Hair & Beards one of our artists stumbled upon a treasure - a lost beard! For some reason this magnificent piece of chin decoration had hidden itself well, but we dug it up, and now it’s available in-game!

[Image: Clear Notifications]
When you hover the title of a notification, there’s now a button that you can right-click to dismiss all currently open notifications! 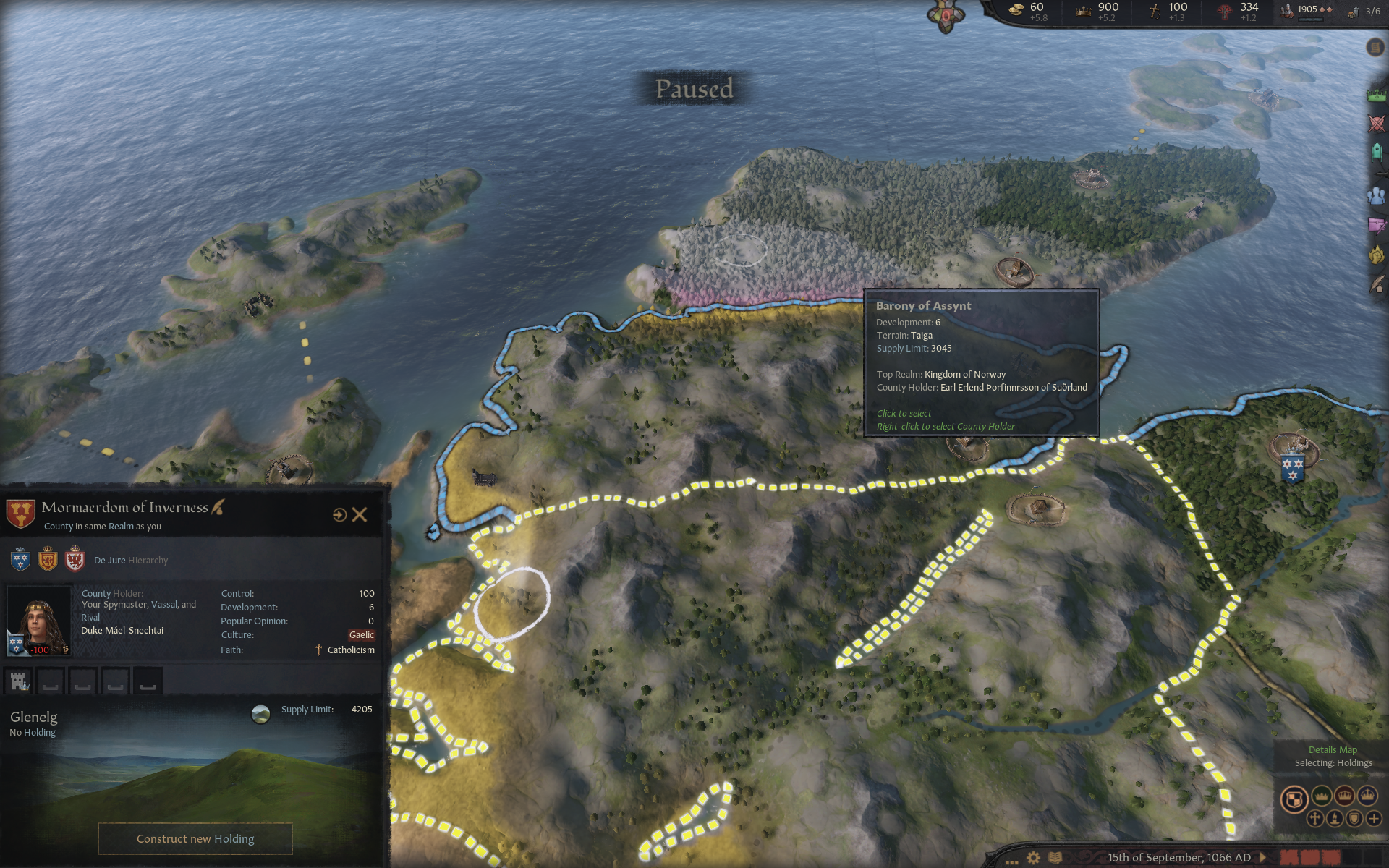 [Image: Baronies in Scotland]
As previously mentioned, there are a few more areas on the map that’s been given an update. We’ve added a few new baronies to the northern parts of Scotland. Greatly reducing the average barony size. 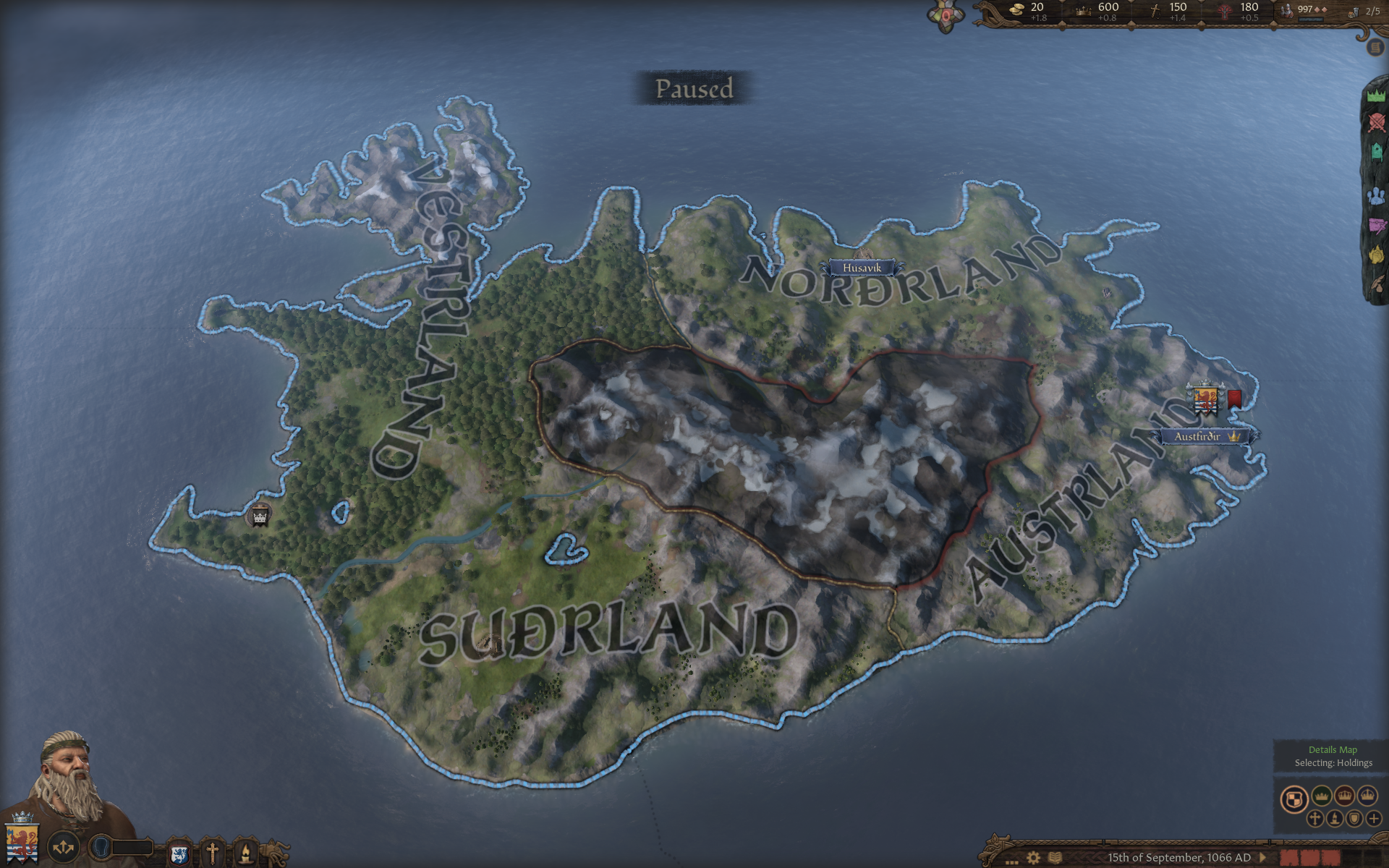 [Image: Iceland]
Iceland now has a total of nine baronies spread across four counties, up from the previous five (and rather large) baronies in two counties. 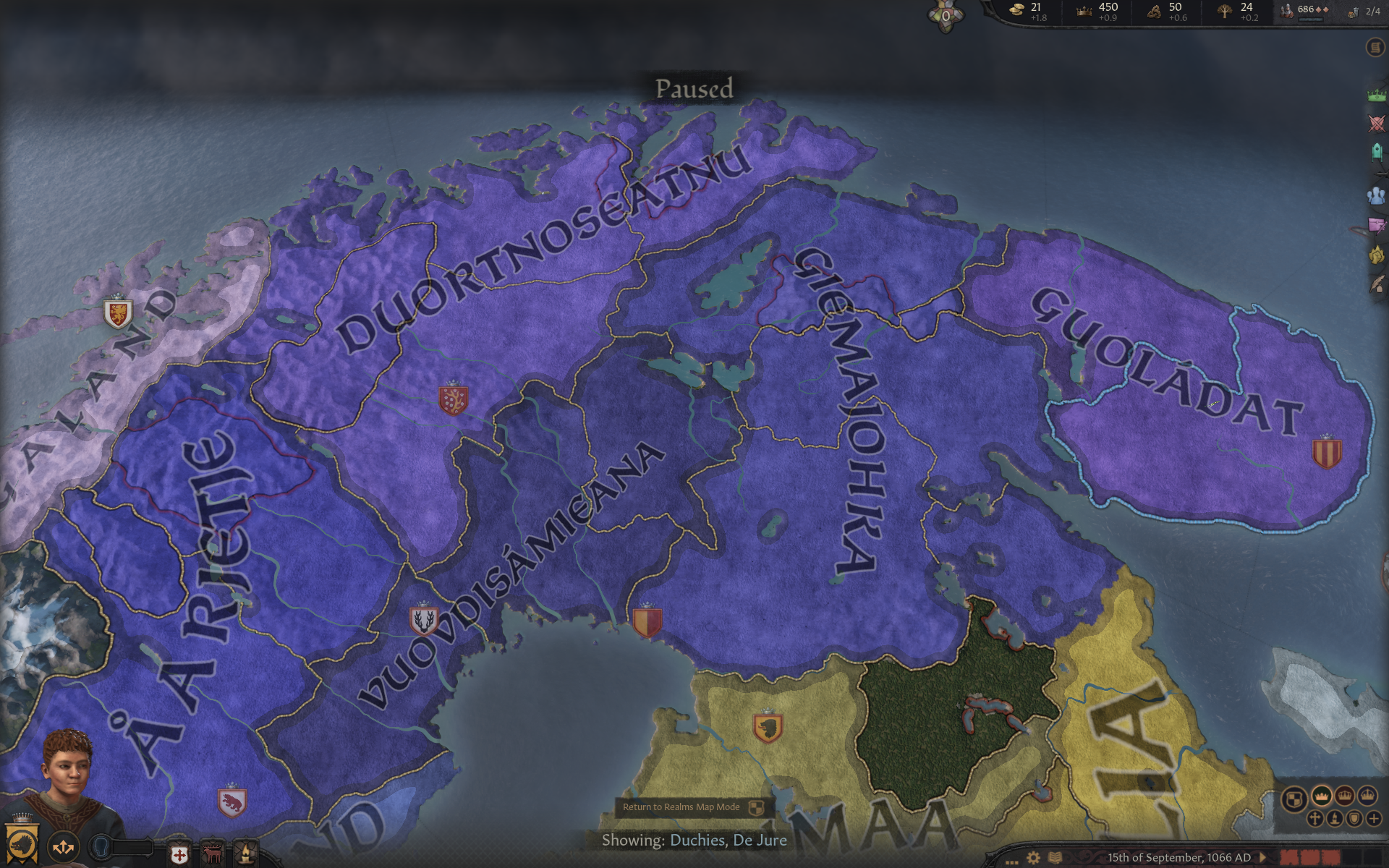 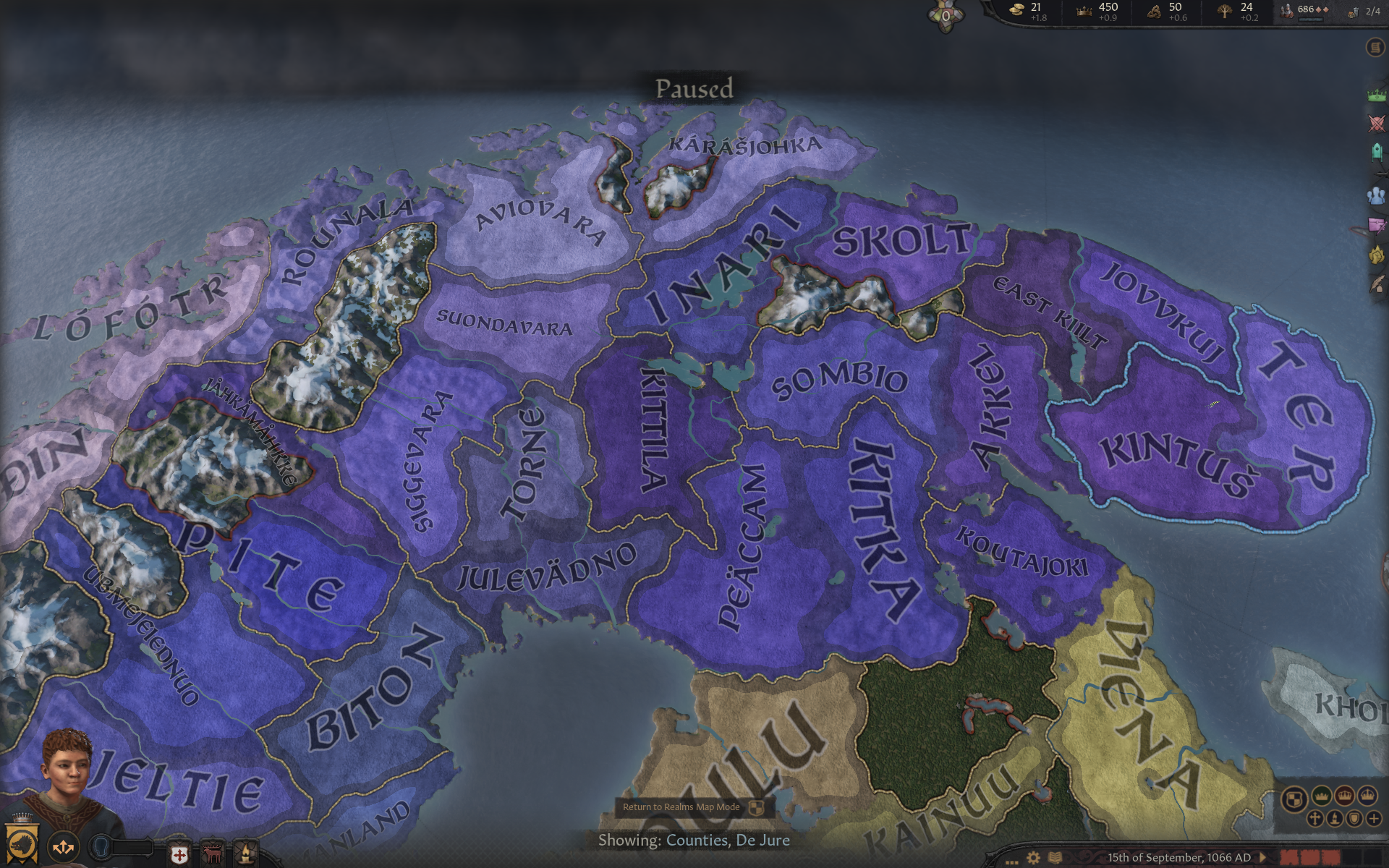 [Images: Sápmi]
Finally, it felt like a good opportunity to also give Sápmi some attention, being in the same area as the theme of the Flavor pack and all. The duchy layout has been tweaked slightly, adding a new duchy and adjusting the shapes of the existing duchies. Then we’ve added a number of baronies, but in order to avoid having too many baronies per county, corresponding counties have been added as well. The average number of baronies in a given county should therefore be roughly the same as before. You can also spot some new lakes and rivers, increasing the visual variety of the area.


Now heed the advice of Huginn and Muninn, and drink deep from the well of Mímir - here are the patch notes in all their glory:

In the coming weeks we’ll do Dev Diaries where we dive deep into Northern Lords content to show the process & thinking that went into it.

Northern Lords will be released today in a little over three-and-a-half hours. Just enough time to gear up and get ready to set sail!
Click to expand...

demondragon24 said:
While I understand this change for the sake of balance to the game. this makes it difficult to have just an army of your good troops. Can we get this as a game rule instead or buttons that allow us to raise only certain types of troops? ie a "Raise All Mercenaries", "Raise All Men at Arms", and "Raise Holy Order"? As it stands now if I want to fight with only my quality troops I have to painstakingly separate out each individual troop and knight from the levies into a new army and it makes going to war a terrible drag on the gameplay.
Click to expand...

ideally, i'd like to be able to pick which individual regiments i want to raise before they start gathering.
Reactions:

Grant Blot event from the DLC Pack is still not working, reported and confirmed here

Short summary of your issue Hold Grant Blot will not continue Game Version 1.3.0 What OS are you playing on? Windows What platform are you using? Steam Do you have mods enabled? No Have you tried verifying your game files...