Jump to latest Follow Reply
Menu
Install the app
You are using an out of date browser. It may not display this or other websites correctly.
You should upgrade or use an alternative browser.
Crusader Kings III 15179 MP Open Beta Feedback 26 Bug Report 10226 Tech Support 1416 Multiplayer 126 User Mods 1421 AARs (After Action Reports) Suggestions 4165
Previous dev diary Next dev diary
Show only dev responses 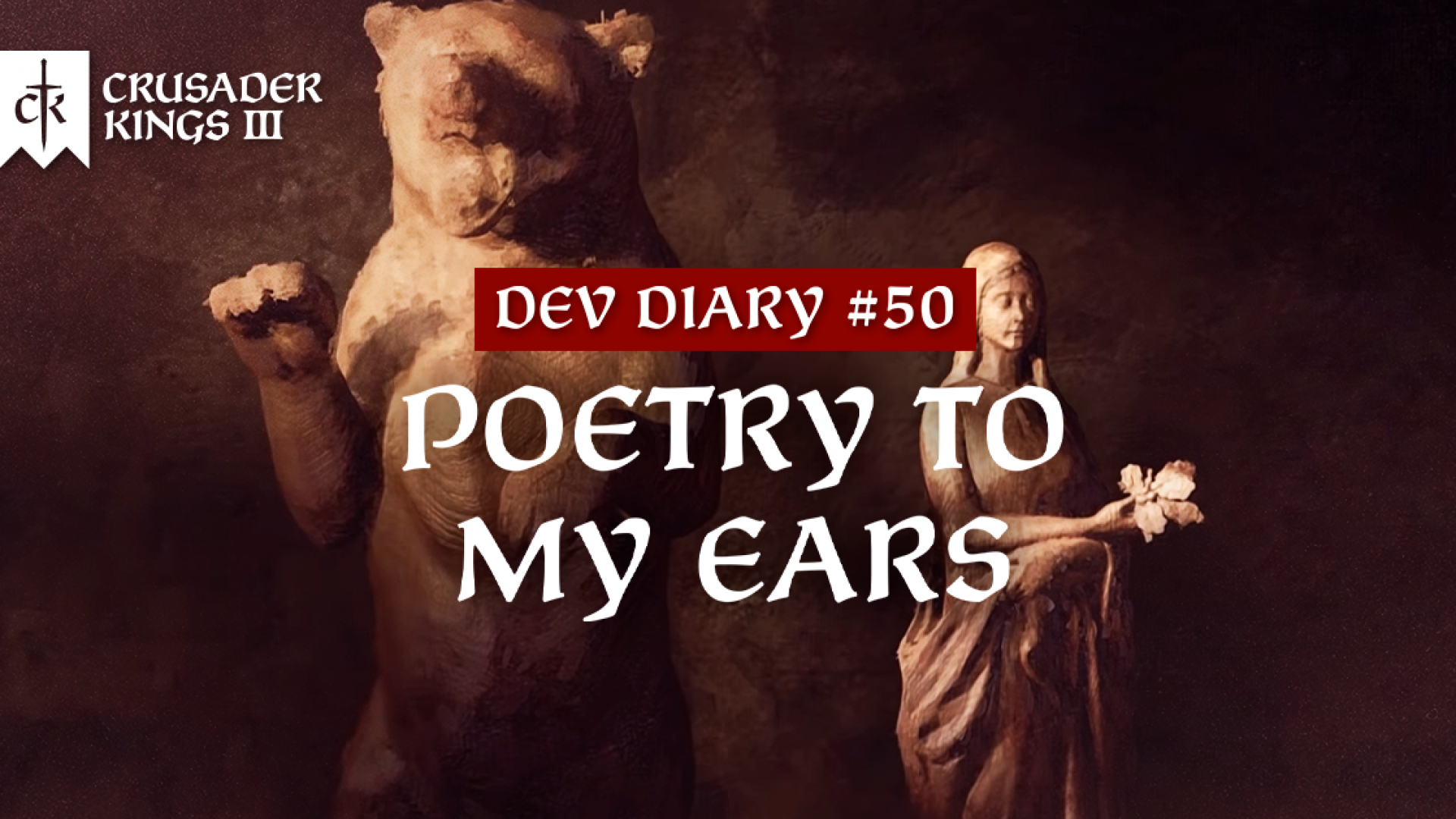 Welcome, comrades, to the latest dev diary, and let’s all give an especially warm welcome to the poet trait! This venerable little piece of content is making a triumphant return from the annals of CK2 as part of the 1.3 free patch.

This ain’t just your CK2 poet trait, though, this is the all new poet trait: reworked stats, a character interaction, and (for which I am so very, very sorry) randomised poetry generation. 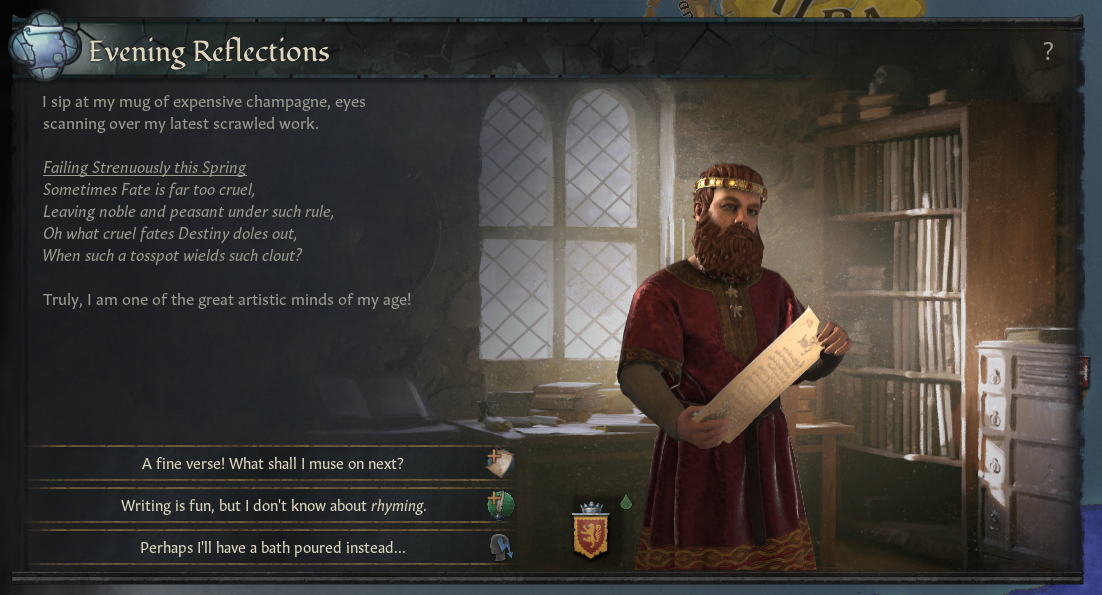 First, a little detour into how poetry works. Every poem has a theme, and, at present, we have five themes to choose from: 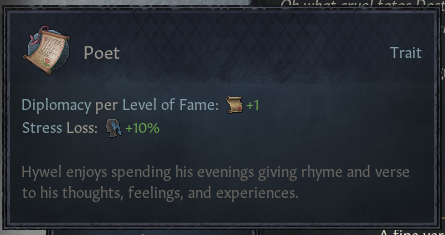 Once we know the theme and subject (if any), we can feed that into custom localisation functions that randomise a couplet. At present, we have both intro and outro functions for each theme, as well as title generation, allowing us to generate ditties between two and four lines in length plus title, though I hope to expand on these in future.

Since these are just ordinary custom locs, they can be dropped into any event or event chain fairly easily, meaning we can auto-generate bad poetry anywhere in future.

Let’s have some examples. Here’s a love poem to the woman that Lord Elisedd ap Tewdwr never quite met:

And another, as he ruminates on the problems of succession:

And a third, where the lord laments the success of Prince Rhodri ap Merfyn in northern Wales:

So, that’s all well and good (or, y’know, utterly horrible if you have any command of basic rhyming), but how do we actually use poems in-game? A few ways!

Firstly, we have the triumphant return of the V-completelyoriginal tortuous poetry interaction variant: 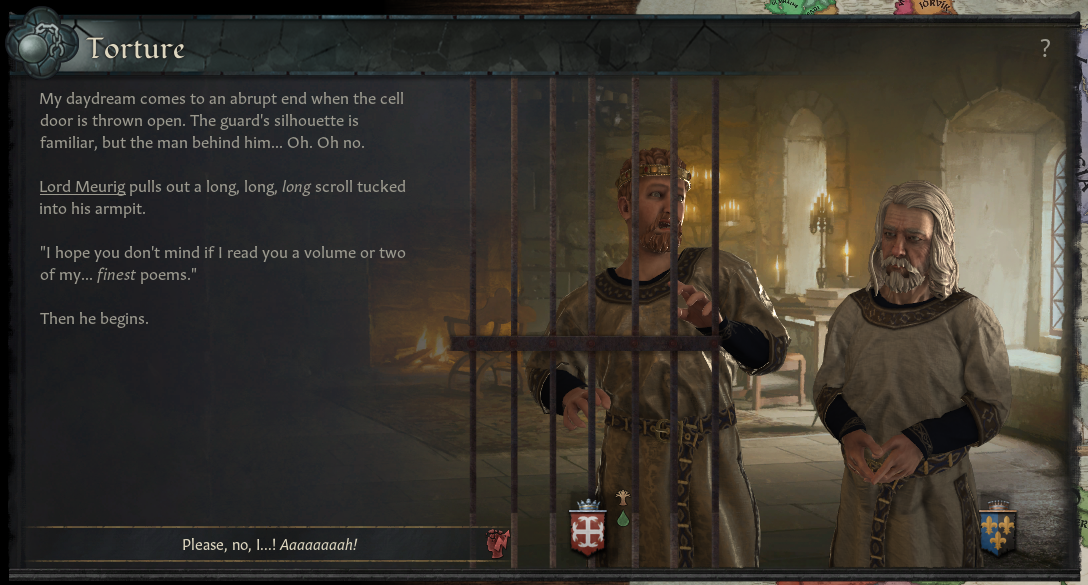 Characters who are poets and elect to torture their prisoners will, frequently, spend hours declaiming their very worst poetry to them. As with any use of the torture interaction, this can cause a hideous amount of stress.

Some poems are quite flattering to receive, and may well be accepted without question: 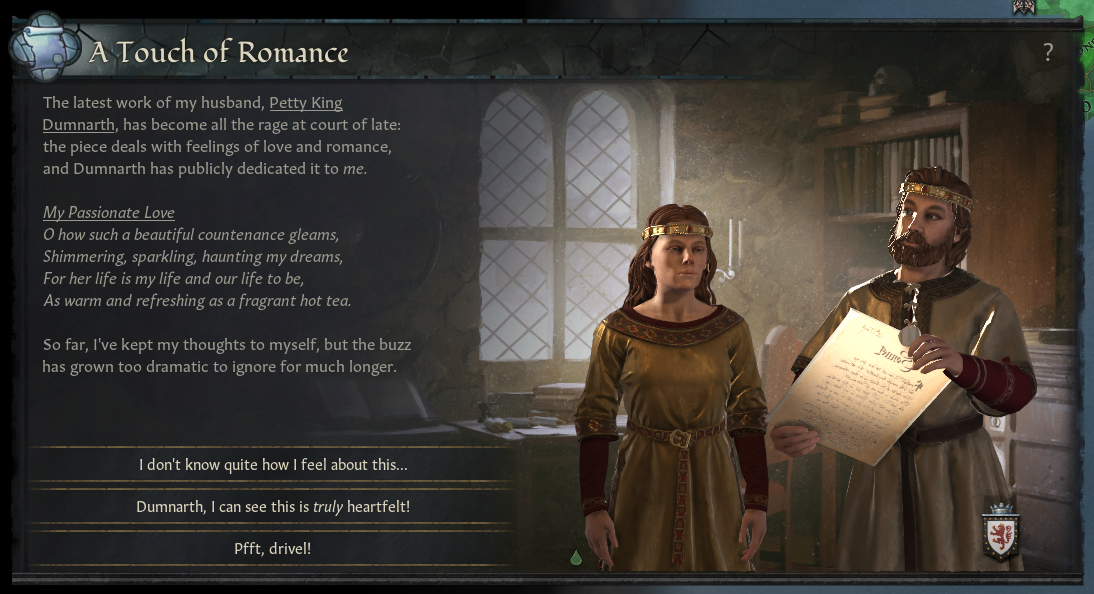 Whilst others are… less polite. 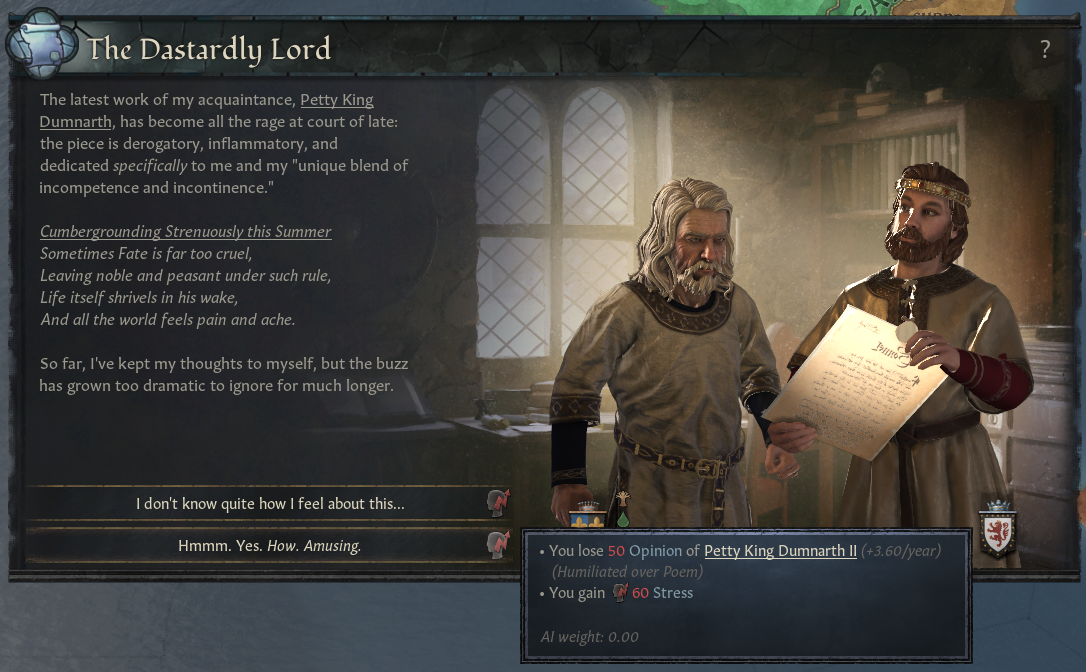 And yes, these are all useable in MP.

Just for fun, let’s have a few out-of-context poems.

To round off this DD, we'd like to give you a sneak peek at some of the upcoming fixes & changes in the 1.3 patch. These aren't the full patch notes! More will come in upcoming DDs.

###################
# Balance
###################
- Men-at-Arms, Special Troops and Mercenaries now have travel time and, like Levies, have a penalty to disband/re-raise during wars. Travel time is based on the distance to the realm capital. This should effectively stop being able to ‘teleport’ MaA across the map
- The renown cost of acquiring Dynasty Legacies has been overhauled. Instead a linear progression (1000, 2000, 3000… etc.) the cost is now dynamic. It should be much easier to unlock your first few Legacy perks, but significantly harder to unlock all Legacies in the game.
- All Dynasty Legacy perks have been rebalanced. Their effects should now be much more tangible and interesting.
- The Yearly Event pools have been restructured, and a lot of triggers loosened or removed outright. In practice this means that you’ll see more events when playing (roughly one random event from this pool every 4 years rather than every 5-6 years). This also means that some extremely rare events will now appear more frequently.
- The Infirm trait events have been moved from the Yearly pulse to the Health pulse. What this means is that all characters can now become infirm, not only rulers. It is also much more likely for elderly characters to actually get the trait.
- Grandchildren and Great-Grandchildren should no longer wander off, following the same rules as Children
- Married characters will no longer wander off if they are in a realm where they are subservient to the other part of the marriage, and their spouse is in the same court
- You can now Disinherit people outside your diplomatic range
- AI rulers who form an alliance in the middle of a war now wait 1 month before calling their new ally to arms.
- Feudalizing as a Tribe no longer requires all Tribal-Era innovations, now you only need 70% (9) of all Civic & Military Innovations
- You will no longer get stress from Parents or Siblings dying of old age when they're 65 or older (if they're friends or lovers you might still get stress, though)
... and many more [will be posted in future DDs]

###################
# Interface
###################
- Hovering over the unit plate of a friendly unit now shows its full path. Great for seeing where your allies are going
- Players now receive a warning when their enemy in a war forms a new alliance
- Updated the Current Situation widget with a fresh new coat of paint. It’s now darker with more muted colors, and some flavorful decor.
- Current Situation entries now only show ‘X’ to close when hovered
- Added a Current Situation item for hooks about to expire; it'll tell you when a hook expires in less than 3 months
- Added a message that lets the employer know if their councilors leave because of marriage or title inheritance
- Building a new holding will now in the Domain view say you're building the holding type (E.G., "Castle") rather than the name of the main building (E.G., "Motte")
- Ensured scheme success and secrecy modifiers show up as percentages in all cases
... and many more [will be posted in future DDs]

###################
# Game Content
###################
- All formerly inaccessible Religious Clothes/Headgear are now accessible in the Barbershop. You want to wear the Pope’s hat and Steppe Pagan robes? Go right ahead!
- Added a small interaction to pardon a subject’s crimes in exchange for opinion.
- A guardian might now get a hook on their ward, should they be of a greedy/deceitful persuasion
- You can now offer concubines and consorts to other characters!
- When Offering Vassalization to a feudal ruler, you may now offer a more lenient Contract to improve their chance of accepting.
- Added a narrative event for converting to a new Faith, as well as a notification for when your liege converts to a new Faith.
... and many more [will be posted in future DDs]
Well, that’s all from me for this week, but stay tuned for next week’s diary, where we’ll be getting into something a little less passive aggressive.
Reactions:

This is a great addition
Reactions:

The poems will be legendary.
Reactions:

As always, thank you for sharing your sentiment & feedback with the team!
Any question let us know, we would love to chat with you
Toggle signature
Ex-Community Ambassador for Crusader Kings III
► Twitter Nicou
Reactions:

I wrote a little poem for you all in my lunch, I hope you all appreciate it <3

Romance be not foreign to us,
the rules we both knoweth.
Marriage is what I bethinking,
nay one else can offer thee this.

I lay bare mine feelings upon thee,
I desire thy understanding.
Click to expand...

Any extra RP events and story arcs are always welcomed!!!

Also, I really like some of the balancing and and game content updates (especially the end of MaA teleporting!)
Last edited: Mar 2, 2021
Reactions:

F-A-N-T-A-S-T-I-C A-N-D W-O-N-D-E-R-F-U-L.
A very, very, very good job, team! Glad to see this addition in the game, and excited for the upcoming changes both in 1.3 and in the DLC!
One question: is the poem quality going to be affected from the maker's Learning attribute?
Reactions:

Does this system have dynamic pun support?
Toggle signature
Quality will be assured.
Reactions:

Ah, Vogonian Poetry from "The Hitchhiker's Guide to the Galaxy" makes a comback! Finally!
Reactions:

I hope receiving a really bad poem from my neighbor gives me a CB
Reactions:

TheMind said:
F-A-N-T-A-S-T-I-C A-N-D W-O-N-D-E-R-F-U-L.
A very, very, very good job, team! Glad to see this addition in the game, and excited for the upcoming changes both in 1.3 and in the DLC!
One question: is the poem quality going to be affected from the maker's Learning attribute?
Click to expand...

Originally, yes. Unfortunately, it turns out that, in order to vary poems by quality, you need to be able to compose varying qualities of poem. So now poems are simply... poems. There's nothing stopping us from dubbing a particular poem amazing or terrible, but it'd be a separate quality from the actual copy.

Enfield_PDX said:
Does this system have dynamic pun support?
Click to expand...

[spray bottle] Back to the space mines with ye, knave! This is medieval territory!
Toggle signature
Posts are not development promises.

Be kind to each other - it's just an internet forum.
Reactions:

I wonder when we will start to hear about the first DLC I'd like to know anything to be honest
Reactions:

Dsingis said:
I wonder when we will start to hear about the first DLC I'd like to know anything to be honest
Click to expand...

Not whilst we've still got free content announcements left to dish out.
Toggle signature
Posts are not development promises.

Be kind to each other - it's just an internet forum.
Reactions:

also good to see we'll be getting a hefty QOL patch, which I think is what I'm most excited for
Toggle signature
signatures are stupid and antiquated
Reactions:

Interesting. I've been missing the poet trait quite a lot actually. There were so many troubadours that were rulers, not to mention all the troubadours that were sponsored by rulers who went across the land like rockstars from court to court, it certainly merits its own flavour pack. Cour d'amour in general actually.
Reactions:

Voy said:
Interesting. I've been missing the poet trait quite a lot actually. There were so many troubadours that were rulers, not to mention all the troubadours that were sponsored by rulers who went across the land like rockstars from court to court, it certainly merits its own flavour pack. Cour d'amour in general actually.
Click to expand...

this is something that has been missing from CK really, troubadours as well as people like Minnesingers in German lands. would be cool if you could get wandering artists who you could sponsor or something, patronizing their work and then if it creates something great you get prestige maybe. these people couldn't feed themselves!
Toggle signature
signatures are stupid and antiquated
Reactions: