Jump to latest Follow Reply
Menu
Install the app
You are using an out of date browser. It may not display this or other websites correctly.
You should upgrade or use an alternative browser.
Cities: Skylines 5745 Support & Bug Reports 7256 Suggestions & feedback 2886 Modding & Resources 1819 Official Information & Announcements 133 City Journals and Let's Plays 478 Cities: Skylines Console & Windows 10 Edition 836
Previous dev diary Next dev diary
This week has been intense! We have been working on a smaller patch to celebrate the start of the 2016 UEFA European Championship and tomorrow there will be a free football (the REAL kind) related mini DLC available for free!

Alongside the mini DLC there will be a small patch to fix a few issues and adding the pre-order content for everyone to enjoy. Most interesting adjustments in the patch are the solar power plants producing now 70% of the daytime output and After Dark's Tourism specialization attracting more tourists. The full patch notes are listed below.

The team at Colossal will continue to work hard on bringing new content and improvements to Cities: Skylines in the future and I hope you enjoy this little update in the meanwhile!

Free Football DLC, available to download on Steam Thursday the 9th of June
Patch for all the players, available after devs get to the office on Thursday (UTC+2/EET)

CO you keep suprising me! In last weeks I thought the development will slow down and you will take your time with new DLCs but no. I did not expect that you might squeeze another tiny DLC in the meanwhile! And for free! Although I am not a big fan of football, matches in city are most welcome. If only I could write my implementation files that fast.
It is pointless to raise up any wishes or questions. I guess you have your feedback so keep working on this beautiful game and bring us something big in the autumn. I am looking forward to it.
M

I really don't understand the negativity directed at Match Day Football DLC. First of all IT'S FREE! It adds animation. Whether you're a fan of football is neither here nor there- it's not as if CO has introduced a new element with the depth and complexity of Football Manager or FIFA 2016 to the game and given it top billing. It is a very simple addition to leisure and tourism which many have been asking for since After Dark was released. Some folks are only happy when they're unhappy!
Reactions:

Keltia_Vikinga said:
Plus, they give choice either to download it or not, since that isn't part of the patch.
Click to expand...

Actually, technically speaking it is part of the patch.
Clicking download just enables it\grants it permission to show up in the game.
yeah yeah I know...technicalities..smecklicalities.

How do you rename your team? I can rename the stadium but not the team.

This will be fun who is going to teach our Finnish friends, the rules of Cricket? but there again in went the DLC and now all I get is Cities Skylines has an error bye bye - so one non soccer fan/ footie fan very disgruntled !
M

g6kfw said:
This will be fun who is going to teach our Finnish friends, the rules of Cricket? but there again in went the DLC and now all I get is Cities Skylines has an error bye bye - so one non soccer fan/ footie fan very disgruntled !
Click to expand...

I think the footie fans are watching the Euro's! 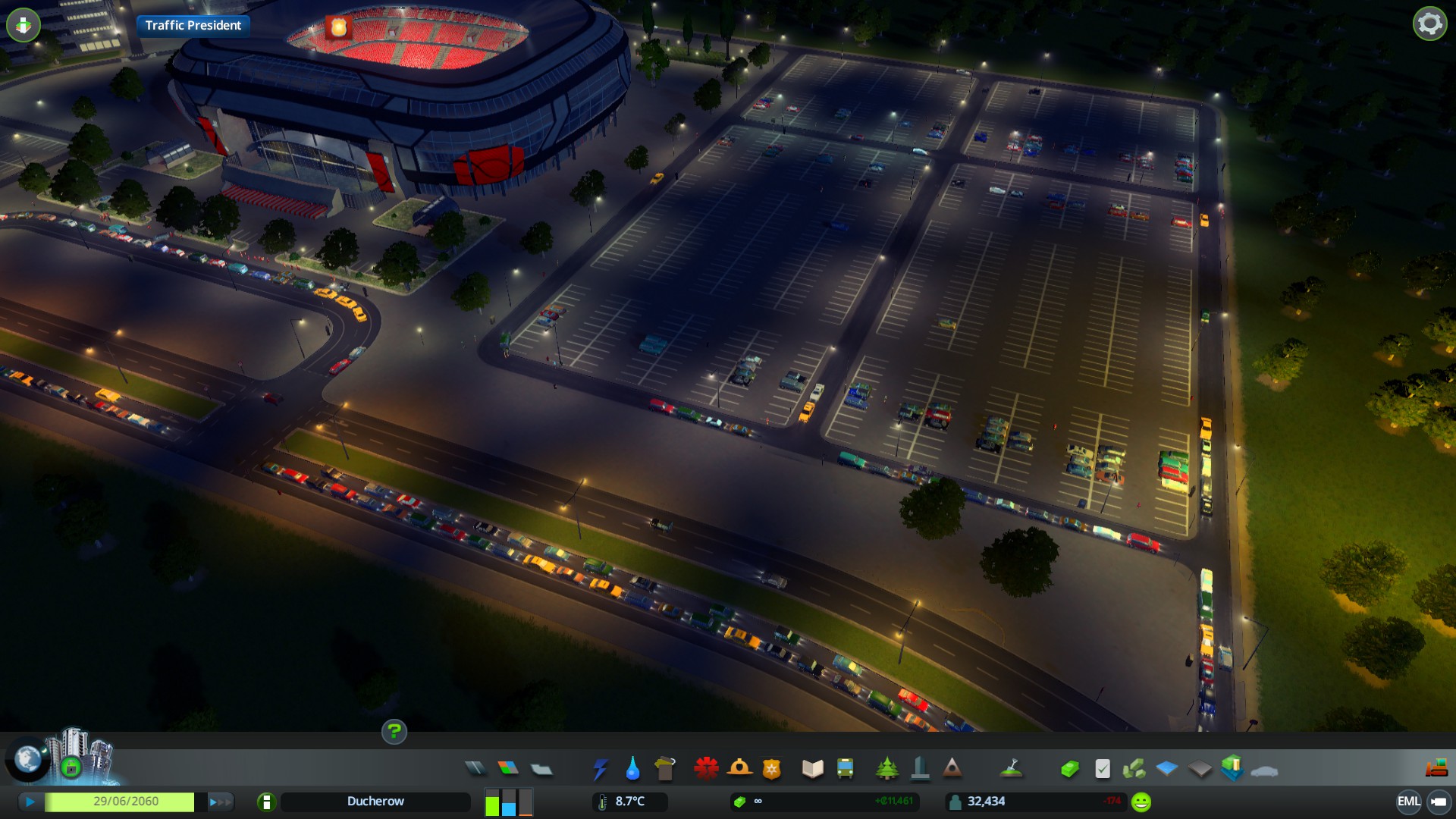 Traffic armageddon and criminals after a football match

It's also soccer in some places. We have in Afrikaans which is my home language. (South Africa) we call it 'sokker'. It mostly is called football because it is huge in Europe and that's what you call it. However it was merely a joke.

Here are my experiences with the latest patch:

The amount of tourists/week increased from ~800-900 to ~4500 - 5000 in my game. It varies a bit, but this is a really good improvement. I noticed lots of Tourist went into the Stadium to attend the match I also noticed, that I suddenly had a weekly change of +1500/week People moving in. This lasted several minutes and city size grew up from 230k to 260k within minutes. With the previous version it stagnated, so this is also positive. I noticed there are also score boards inside the stadium, but actually don't display the current score during the game. This would be nice too, just a detail, but nice.
Another person already mentioned the text about multiple stadiums. With the previous version I always had ~ 3% unemployment, and now it seems more dynamically.
Yesterday I had 8%, which is the highest value I ever had.


pitweston said:
While playing, the football match mechanics mentions about subsidized youth being 9,000 per week multiplied by the number of stadiums.
Click to expand...

Is this just a translation bug, or will there be further additions? My Team already won their first game and I received 500K (!) for this. WOW, big money boost
All in all the patch is great, mostly noticeable are the tourist and solar power plant changes, which are very positive gameplay changes for me. I haven't noticed any new Problems. Thank you!

I got a problem after the patch like big pixelled game.. at first, i thought it was because mods but not. And then not long after, i got an update from my nvdia card, and since no problem. x)

CRCinAU said:
No, it really isn't.... Football in Australia is this.

Football in Australia can mean one of four different codes; Rugby Union, Rugby League, Association Football, or Australian Rules Football. If someone says football, its dependent on the context, so most Australians would understand it.
M

This DLC is AWESOME!

Does anyone know if the Rush Hour Mod will work with this DLC?

Esteemed Emperor of Emperors and Lord of the world

mati_motorloco said:
This DLC is AWESOME!

Does anyone know if the Rush Hour Mod will work with this DLC?
Click to expand...

By "Real Football" you mean soccer I presume?
Reactions:
S

Don't start.
Toggle signature
We have learned to fly the air like birds and swim the sea like fish, but we have not learned the simple art of living together as brothers.- Martin Luther King Jr.
The whole problem with the world is that fools and fanatics are always so certain of themselves, and wiser people so full of doubts. - Bertrand Russell
Reactions:

The ball is already rolling.

(not a yankee prolapsed sphere)
S

And yet you, yourself, call it what I would call it: Soccer

Case closed.
Toggle signature
We have learned to fly the air like birds and swim the sea like fish, but we have not learned the simple art of living together as brothers.- Martin Luther King Jr.
The whole problem with the world is that fools and fanatics are always so certain of themselves, and wiser people so full of doubts. - Bertrand Russell
Reactions:

Steve B. said:
And yet you, yourself, call it what I would call it: Soccer

Except I call it football. Not real football, not soccer. Just football. It's how the game is played after all.

Calling that yankee game "American Football" would be a misnomer even.