Jump to latest Follow Reply
Menu
Install the app
You are using an out of date browser. It may not display this or other websites correctly.
You should upgrade or use an alternative browser.
Crusader Kings III 11758 MP Open Beta Feedback 21 Bug Report 7068 Tech Support 863 Multiplayer 93 User Mods 1069 After Action Reports (AAR) 161 Suggestions 2977
Previous dev diary Next dev diary
Show only dev responses 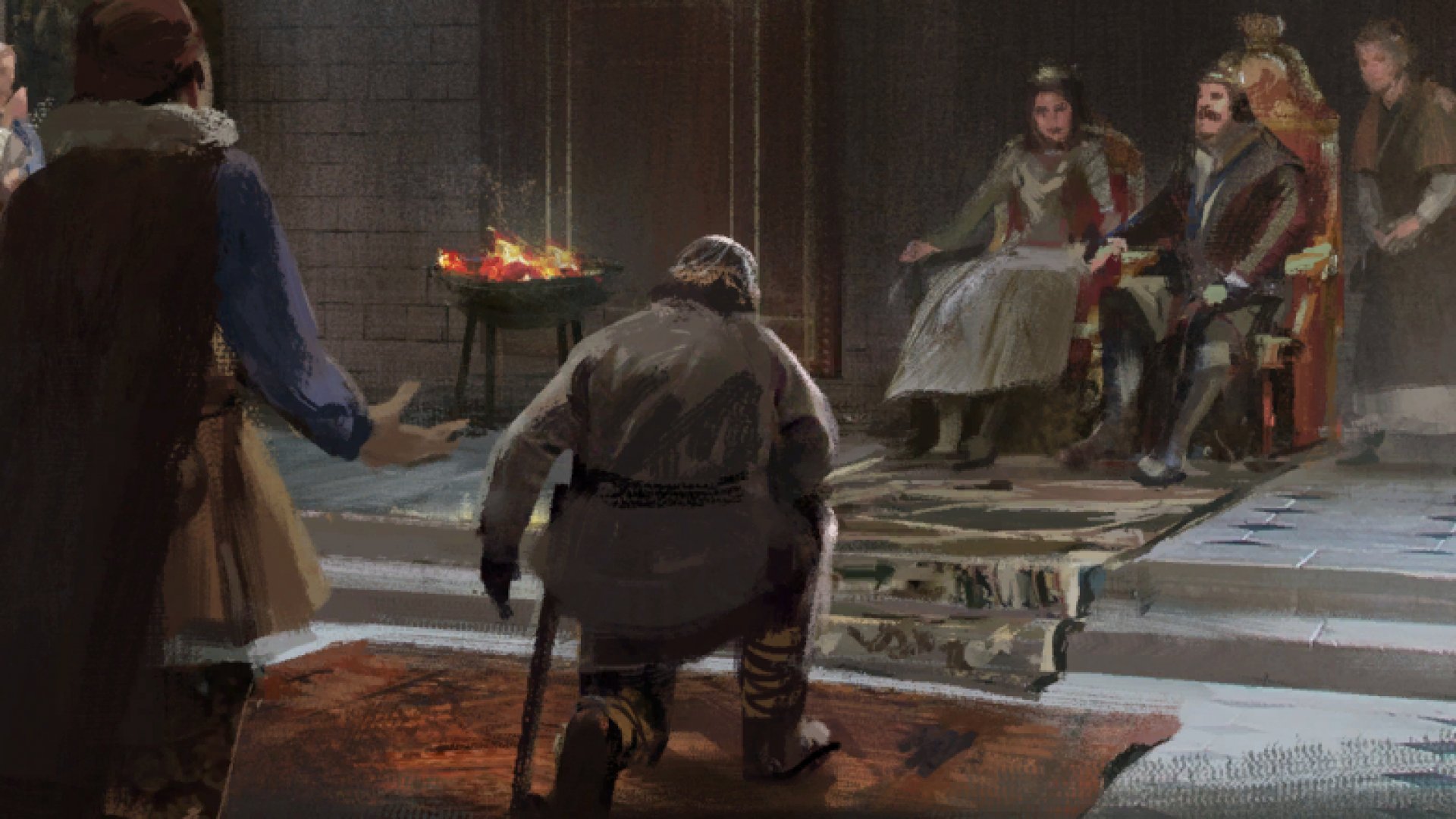 Hello there, and welcome to the 78th CK3 Dev Diary!

I am Mrop, one of the User Experience Designers on CK3. Last dev diary, we had a look at languages your Character can learn on their own. Today, we are having a look at how language relates to your Royal Court: Your Court Language.

Historically, it was not always so that nobles spoke the same language as the commoners. Rather, it was seen as more prestigious to speak another country’s language to show that you were cultivated enough to suck up to your superiors.

One of the most well known examples of this is how French was spoken across many courts across Europe around the reign of Louis XIV. This is outside the timeframe of Crusader Kings, but there are earlier examples; Norman nobles who invaded England together with William the Conqueror continued to speak French, influencing the development of the English language as we know it today.

Each Ruler with a Royal Court has a language chosen as their Court Language. At the start of the game this is determined by what historically was used. If you get a Royal Court later, its Court Language will simply be your native language. You can, of course, choose to change it!


So how much Grandeur can you get from a certain Court Language?

The largest share of Court Grandeur comes from the pecking order of all Royal Courts who speak that language.

On the other hand, if you are not the grandest Court of the language, you gain Court Grandeur based on the difference of your Grandeur, and the Grandeur of the leading Court. Speaking the Language is not required for this bonus, so even if your neighbors have a language you cannot speak you can attempt to impress them by following their lead.

Here is an example of a calculation for having your native Language as Court Language (actual values are very much temporary):

Since you gain extra Grandeur for matching your Court Language with your native Language, you may want to create a new Hybrid or Divergent Culture (as described in Dev Diary 65) to adapt to the language your Realm or Court prefers.

Eventually, once your Royal Court becomes grand enough, it is usually time to choose a language of your own as the Court Language, and start attracting lesser Courts to adopt it.

Finding Court Language in the Game​

You can, as shown above, select your Court Language inside your Royal Court, which takes you to a special map mode of all Court Languages in the world.

You can also directly adopt the language of a certain Culture by clicking on the button next to the language in that Cultures own View.

Beware however, not everyone may speak your Court Language that well (including yourself), so the threat of embarrassment is ever present. Just like in real life.

Seeing your Court Language spread is one major way to understand how influential your court becomes over the years.

Here is the map at game start in 867 AD. You can see languages such as Arabic being used in the Habbari Sultanate (roughly in modern day Pakistan), and how the king of Bulgaria has chosen Greek due to the influence of nearby Byzantium.

100 years later, Magadhan is slowly becoming more popular in India, and the Kingdom of Italy have adopted French as their Court Language.

In 1067, a century later, Greek is spreading to the newly formed Kingdoms in the Empire of Khazaria. Some new languages like Berber also pop up.

Finally, in 1167, we see four languages dominate the courts of the world. Greek has spread through the now shattered Empire of Khazaria, and is also making its way down to Africa. At the same time, there is still room for smaller Court Languages like Shaz Turkic to thrive.

That is all for now; thank you for reading!
Reactions:

good with computer
61 Badges
Sort by date Sort by votes

Is this DLC going to be released in 2021?
Reactions:

Looks like a fantastic mechanic to add even more roleplaying to our games!
Reactions:

This looks so cool and interesting. And I'm glad to see that Navarre has "Iberian" as Court Language, to represent well the Romance speaking elites of the Kingdom. Kudos for the detail!!

One question is, What about Latin? Although the division in languages shown in the maps can be correct for the Late Middle Ages for the Early Middle Ages Latin was definitely the official language for the Western European Catholic Courts and the one of the Catholic Church. Has Latin been deleted and substituted by the Languages Families or is still considered a Language, even if no Culture has it as its own language?
Toggle signature
The Kingdom of Navarra and Medieval Basques did not practice Cognatic Succession

Horror In The Deep

So... What about Latin?
Reactions:

give us the release date
Reactions:

I don't understand all that blank space in the maps. Not all languages will be available in-game?
Reactions:

Also, wouldn't Latin be the proper court language for much of Europe in the time period?
Click to expand...

'tis a bit complicated. In this timeframe, you were considered literate if you could speak both French AND Latin, so they went hand-to-hand.
Personally, I'd rather see Latin be used as some sort of Catholic religious perk, which gives some bonuses to all Catholics that you usually get from sharing Court Languages.
Toggle signature
Nationality: Croat
Religion: Roman Catholicism
Ideology: Rightist
Last Megacampaign: CK2 -> EU4 -> Vic2 - Crusader Panonians
Last EU4 playthroughs: France, Commonwealth
GENERATION 40: The first time you see this, copy it into your sig on any forum and add 1 to the generation. Social experiment.
Reactions:

This sounds like an interesting system in theory, however based in this description, I would assume that having your own language as your court language will always be the best option as you keep expanding, and the grandeur bonus from counties speaking your own language will be an additional incentive to culture-convert everything instead of actually trying to maintain a diverse realm.

Also, I wonder how much grandeur base you can get once your realm becomes really large. Will we hit the cap just from the number of counties/courts speaking our language? I hope not.
Reactions:

Lucododosor said:
I don't understand all that blank space in the maps. Not all languages will be available in-game?
Click to expand...

The map mode is for Court Languages, only a Royal Court will have one. The blank spaces are rulers who do not have a Royal Court.
Toggle signature
Experienced Programmer on Crusader Kings 3

I see Byzantium is still blobbing, even in the realm of language
Reactions:

Looks like a really cool idea, a few question :

Am I crazy or is there no downside to just picking the biggest language? The byzantine emperor will invest thousands of gold to increase their grandeur and I’ll get some of that for free. I don’t even have to speak it.
Reactions:

I hope these are language groups/families rather than specific languages - Iranian is not a language.
Reactions:

Just one question, no offense, but what is Iberian? I mean, I could see either Latin or Asturleonese/Castilian/Galician-Portuguese/Basque/Navarran-Aragonese/Catalan as options, but "Iberian" just wasn't a thing.
Reactions:

This is really cool. Some questions.

1.) why is Iranian not called Persian?
2.) Why those languages chosen for the Indian Empires. Kannada I get because the Rashatrukas supported them. But why was Magdhan and Sauraseni chosen? My understanding is that Sanskrit was still a prestige language in all three realms.
3.) Is it possible for there to be a liturgical language similar to a court language? So that say Catholic priests know Latin, or Buddhist monks study pali, and the Jewish faiths have hebrew?
4.) I presume you must be in diplomatic range of the court whose language you wish to adopt?
5.) For Chinese, which Chinese is it? as Chinese while being written the same, can be spoken very differently, ie Cantonese and Mandarin being the two big ones.
Toggle signature
My AARs
Vyshan's Inkwell listing of his AARs
Dharmachakra - An Indian and Dharmic Religion Improvement mod
Retired HOI4 Kaiserreich Dev
Reactions:

Also, wouldn't Latin be the proper court language for much of Europe in the time period?
Click to expand...