Jump to latest Follow Reply
Menu
Install the app
You are using an out of date browser. It may not display this or other websites correctly.
You should upgrade or use an alternative browser.
Crusader Kings III 15195 MP Open Beta Feedback 25 Bug Report 10229 Tech Support 1417 Multiplayer 126 User Mods 1421 AARs (After Action Reports) Suggestions 4167
Previous dev diary Next dev diary 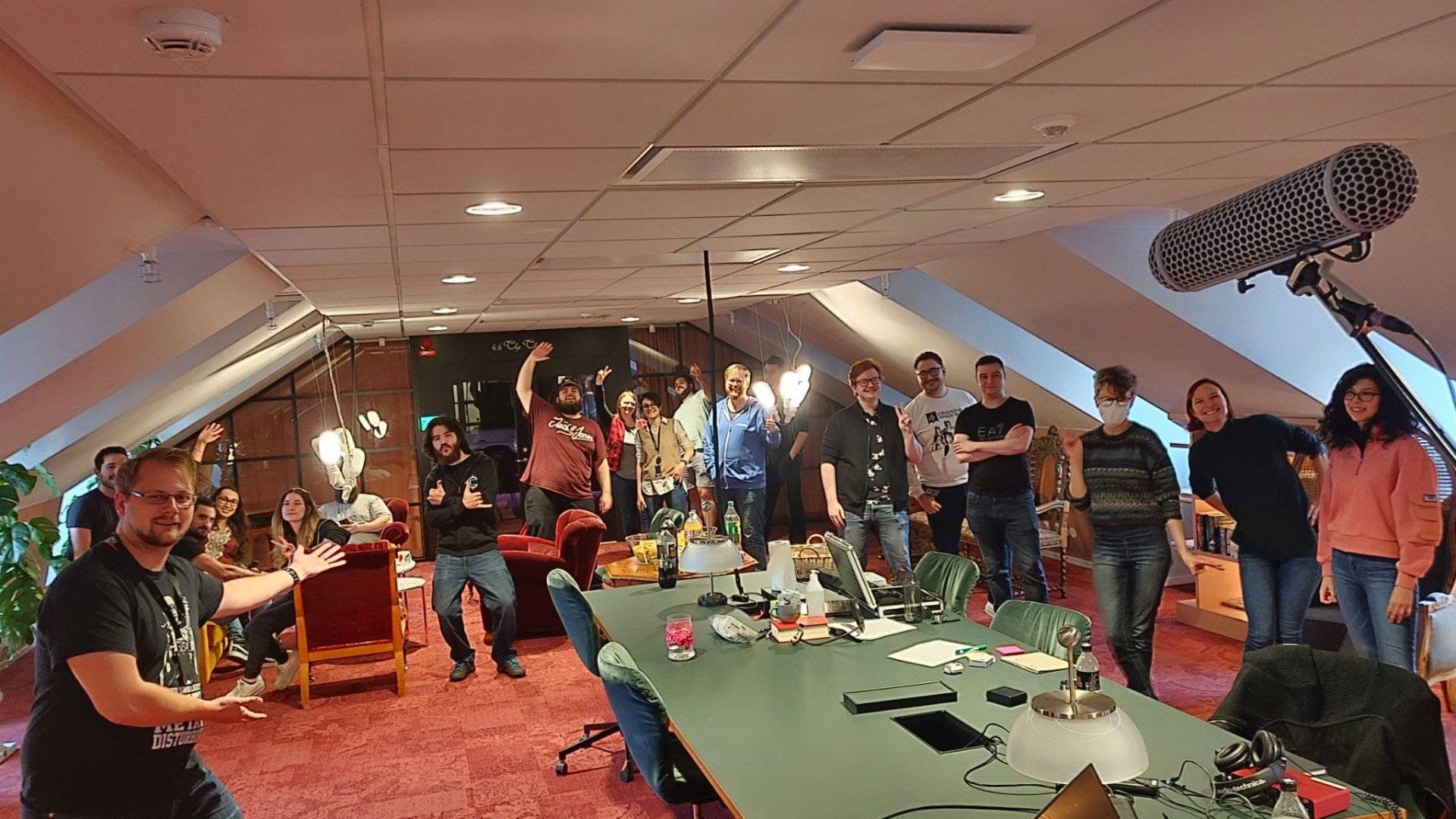 Welcome to another Dev Diary! This time I’m back to tell and show you a little behind the scenes of what we have been doing with Audio & Music for Royal Court

The introduction of Court View made us really excited in the Audio Dept and also a new challenge! After working so long with games that mainly use paper maps, finally having a 3D space there was some extra room to play around with Sound Design and also getting a bit creative.

Of course, we wanted to add sound effects onto certain different objects like fireplaces and chandeliers and also including room ambiences for each type. But we also thought it would be a perfect opportunity to give more “life” to the court rooms by adding something we call “walla”. Or perhaps known more commonly as “crowd recording”.

Since restrictions did start to loosen up more in Stockholm, (and also it’s a fun activity) we thought about recording some of our team members from the CK team (and a few more colleagues from other projects)

Now you might be wondering how you even do something like this? Of course, it requires a bit of patience and having a couple of microphones!

So this is me and Tobey Evans, the Sound Designer working on Royal Court, sitting down in one of the Sound Studios and doing pre-work before the big recording session. we’re testing out all the equipment, making sure all the cable works as intended and it all sounds great!

After all that we did manage to book the biggest room we have in the office, which is called “the Library”. Not only was it to ensure that we would be able to have distance between all people while recording all their voices, but also it had the best acoustics to match the size of the Court Rooms.

The next question would be what kind of script we were using for this recording. It’s rather difficult to record “walla” in all languages, so instead, we did use a script made in Latin. Not because we all are fluent in Latin (would have been cool though!) but because,from my experience, that has been some of the best languages to use when you need some “gibberish” talk in the background. Especially since we had a big mix of people with different accents.

It was a fun big session we had, and everyone was happy to be part of such a big team event again after not seeing each other for such a long time in person!

So we did go a bit extra to make these new fancy rooms in CK3 sounding more alive and enhance the experience for you players.

How will all this sound in the end? It will change depending on your Court’s Grandeur level! The higher this value, the more of the crowd you will hear in the room, (and this will also work the other way around, so less Grandeur , fewer people.

Hi everyone, it’s Yannick and Robin from Audinity. After having written music for several Paradox games and expansions, we’re happy to be on board again for CK3: Royal Court and share some insights into the new music for this expansion!


The soundtrack for this Expansion will consist of some new ambient Mood Tracks, Cue Tracks and even a new Main Theme.

The main direction for these new tracks was trying to make them sound a bit different compared to the existing music from the base game. Medieval music can have many different sounds, but since we are at the Royal Court this time, the keyword for the music for this Expansion was “Royal”. So you can hear some powerful fanfares, noble strings, and a medieval guitar ensemble that make you feel like standing right in the King’s hall.

While the Mood Tracks will add some noble flavours to the general ambient music, the Cue Tracks will play when you are Holding Court in your Kingdom. And when starting the game, the new Main Theme will welcome you to this Expansion and to the Royal Court!

We did not only record several fantastic solo musicians playing some fancy historical instruments for this soundtrack, we also wanted to go a bit extra on the orchestral side, so we actually went to Prague and recorded the music live with the FILMharmonic Orchestra at Smecky Music Studios!

This was the studio before the recording session...

...and this is what it looked like during the session with over 60 great musicians at work!


We could keep writing about the music, but we think you get the best insight into the soundtrack for CK3: Royal Court when listening to some of the music itself!
So we are happy to share with you the “Holding Court” Cue Track for Western Europe as a preview!


So back to Metal King, I hope you enjoyed this week’s Dev Diary, understand it might not tell you so much about the features but at least we got to show you a little behind the scenes when we do work with Sound Design & Music.
Reactions:

EDIT: but interesting and welcome!
Toggle signature
Victoria 3 suggestions:
Reworking the Flu Pandemic mechanics
Customizable Super List: one list for everything
Fix the US "appendix" into Canada by adding Alberta and Saskatchewan to the Oregon Compromise
Reactions:

The track is amazing.
Yet I can't stop thinking of Monty Python's Holy Grail when listening to it

I would like a bug-fixer diary to understand why known issues take 6+ mos to fix.
Reactions:

I'm sure it's very interesting to a lot of people, but looks like running out of things to write DDs about. Which means release date will be announced soon, right?
Reactions:

Longhorn_99 said:
I would like a bug-fixer diary to understand why known issues take 6+ mos to fix.
Click to expand...

I agree, love you Paradox but I am a little tired of being patient and think the glass i half full. You as a company have my good will, always, but I personally need that patch DD as my future with ck3 is also weighing on this. Sorry
Reactions:

While I'm sure the music is impressive as always, can we get any confirmation that we will get non-European styled music at last for the game in this expansion, say for Africa and Asia? Up until now, the music has been, well, a little disappointing and immersion breaking when playing anywhere on the map outside of Europe.
Reactions:

I'd love to see full soundtrack (FLAC/OGG) DLC just like the one from Stellaris or I:R!
Reactions:

And the moral of the story, never forget your hand gel.
Reactions:

I know some people do not appreciate all the work that went into CK3 sound design. But I think it was one of the biggest improvements compared to previous Paradox releases. Videogame graphics will probably never feel perfect but audio can totally be. Keep up the good work and thank you!
Reactions:

When they start to share music&art we would expect the content is almost finished and release in less than a month.
Reactions:

I am wondering though, will there be themes for the other courts in the world, the Indian, Muslim, African, etc. And if so what will they sound like?
Toggle signature
My AARs
Vyshan's Inkwell listing of his AARs
Dharmachakra - An Indian and Dharmic Religion Improvement mod
Retired HOI4 Kaiserreich Dev
Reactions:

Can we have the CKII Holy Fury songs back in the soundtrack? Some of them were the absolute best of the CK ones, at least for me.
Toggle signature
Please support my suggestion to add Mozarabs as a playable culture in CKIII and to bring back Albanian, Coptic and Dalmatian cultures in CKIII
Reactions:

Cassilda said:
Can we have the CKII Holy Fury songs back in the soundtrack? Some of them were the absolute best of the CK ones, at least for me.
Click to expand...

It would be Horse Lords for me if I was to say which was best. but bringing back music from CK2 would be good.
Toggle signature
My AARs
Vyshan's Inkwell listing of his AARs
Dharmachakra - An Indian and Dharmic Religion Improvement mod
Retired HOI4 Kaiserreich Dev
Reactions:

Holy crap, I love that music piece. Scratches all my european medieval music itches at once, going straight into my medieval music playlist lol. Amazing job, if the rest are anything like that, then I'm very excited to hear them ingame.
Reactions:

This is not a critic or anything. I just think it is interesting how we all associate orchestral music which is made with many many instruments not available in the middle ages with medieval times. Must have something to do with the way film composers in the first half of the 20th century orchestrated the medieval movies.

Again, I ok with this, just thought about it while listening to the track.
Reactions:
A

Sort of relevant question... Is there a way to skip tracks in CK3?

Until this announcement, I semi-forgot that music was even in the game. I had muted it after hearing that Northern Lords (Viking-y chanting one) track about a billion times. I actually just launched a save, unmuted, and it immediately started playing...
Reactions: