Jump to latest Follow Reply
Menu
Install the app
You are using an out of date browser. It may not display this or other websites correctly.
You should upgrade or use an alternative browser.
Crusader Kings III 14231 MP Open Beta Feedback 25 Bug Report 9407 Tech Support 1225 Multiplayer 106 User Mods 1296 AARs (After Action Reports) Suggestions 3848
Previous dev diary Next dev diary
Show only dev responses 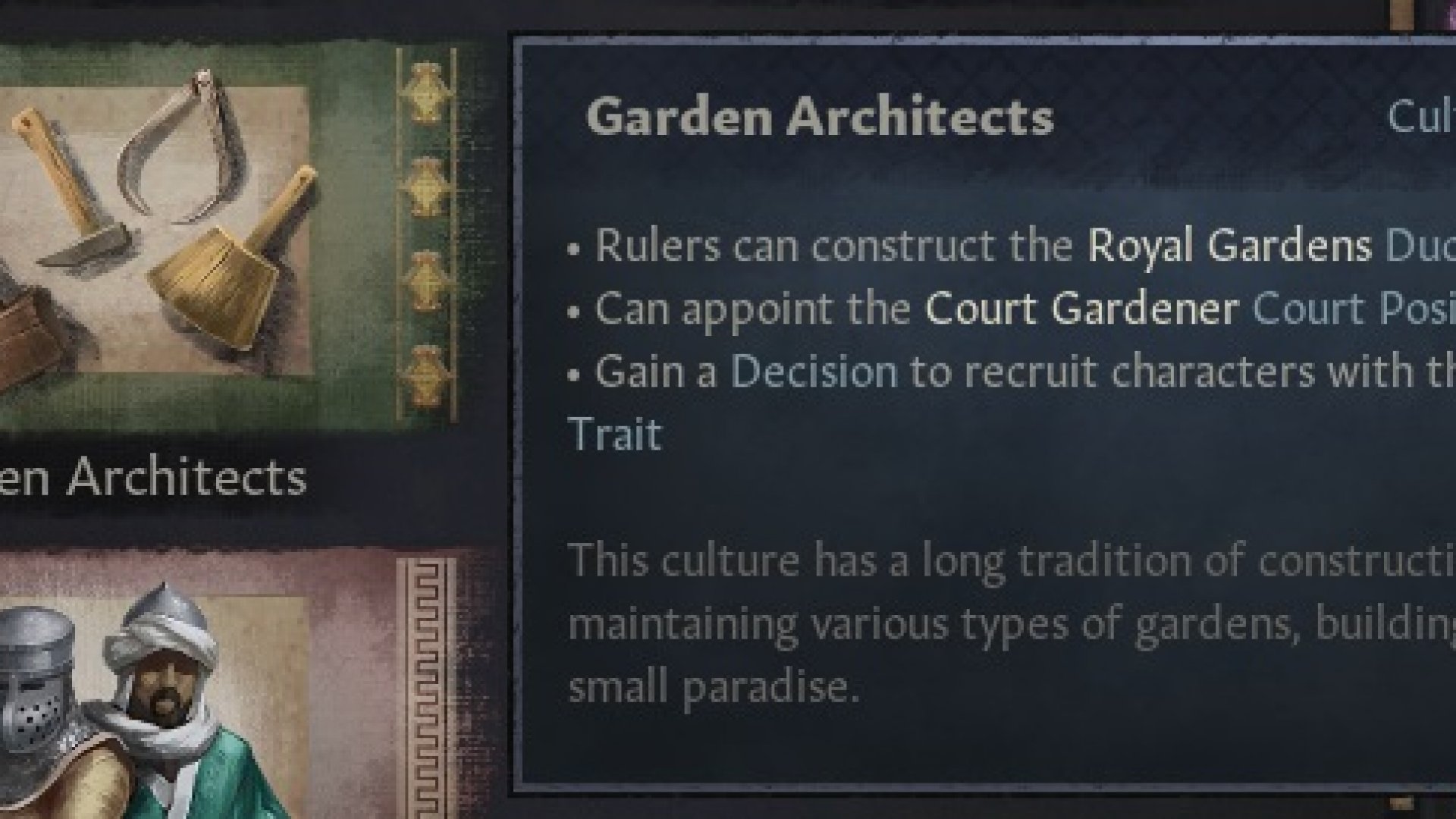 In the update that will launch alongside the Royal Court expansion, we will introduce Court Positions - which can be seen as an evolution of CK2’s Minor Titles with a number of new improvements. While the old feature from CK2 had all sorts of various honorary titles, we wanted to focus on the most important positions at your court. Jobs that are relevant directly to you as a ruler, or that of your court.

Court Positions include a number of different positions, such as a Court Tutor, or Seneschal. Most positions imply that the appointed character has an actual job at your court and provides you with their services. That doesn’t mean we haven’t added any of the classical honorary positions though. Expect to also be able to appoint a Master of the Hunt, Master of the Horse, or (if you are playing as England) a Keeper of the Swans.

Each position will provide you with a set of bonuses, mostly in the form of various modifiers, but certain positions have more interesting benefits as well. For example, a Court Tutor increases the chances for children at your court to receive a better education trait.

Not all characters are equally fit to serve in any given position. Their skills and traits have a significant impact on how good they are at their job. This is reflected in their Aptitude. A position uses one or several skills, such as Learning for a Court Physician, which is the main factor for what Aptitude a character will have. Each position also has a number of traits that may increase (or even decrease!) their Aptitude further. Aptitude is measured on a scale in five steps, ranging from ‘terrible’ to ‘excellent’. The higher the Aptitude is, the greater the benefit. Let’s look at the Seneschal as an example. A character with the lowest Aptitude will only grant you a Control Growth bonus of +0.1, while a character with the highest possible Aptitude will give you +0.5.

[Image showing the Aptitude for a court position]​
Unlike CK2, hiring a character for a position is actually going to cost you, as each Court Position has an associated salary that you will be paying for out of your own pocket. While the salary for any given position won’t be very expensive, they will stack up. You’ll have to make a decision on how much gold you are willing to spend on all of your appointed positions, and if the characters you have available are skilled enough to warrant the salary.

As you may remember from Summer Teaser #3, we’ve gone through several old events to make sure that if you have someone appointed in a relevant position, they can appear to provide extra options or affect an outcome to be more favourable. Additionally, some positions may appear in events related to schemes. We’ve also added Cultural Traditions that increase the Aptitude of specific positions for characters of that culture, or even unlock a position you normally wouldn’t have access to! The goal is to make sure that Court Positions feel like an integral part of the game, and to have them feel as immersive as possible.

Before we wrap up, let’s take a look at a few examples of what some of the different Court Positions can do for you.

The Court Physician has been updated to be a fully fledged Court Position and make use of the new system. As you’d expect, the appointed character will take care of the sick people within your court. Court Physicians have a lower salary than most, so you should in practice always be able to afford one. If you have the Royal Court expansion, having a Court Physician also provides you with a small bonus to your grandeur. A skilled physician was often seen as very prestigious after all.

[Image of the Court Physician Court Position]​
Next is the Bodyguard. You can hire up to two Bodyguards at the same time. Bodyguards don’t provide any passive modifiers like most other positions, but do have two fairly powerful bonuses. They have a chance to prevent assassination attempts on you, and they reduce the risks of participating in battles, as long as both of you partake in the same battle. So make sure that your Bodyguards have been appointed as your knights to make the most use of them. But beware! Bodyguards are very powerful agents should they join a scheme against you. Keep an eye on their opinion to avoid any backstabbing shenanigans!

[Image of the Bodyguard Court Position]​
Another interesting position is the Food Taster. Any self-respecting (and perhaps paranoid) ruler should have one. A Food Taster not only gives you some protection against hostile schemes, they may even prevent a poison-related murder attempt against you! By, of course, eating your food and dying in your place… Just like a Bodyguard, a Food Taster is also a powerful agent should they join in on a scheme against you.

[Image of the Food Taster Court Position]​
Let’s take a look at the Court Gardener. This court position is unlocked by a cultural tradition - Garden Architects. Gardeners provide a passive opinion bonus for your courtiers and guests (who doesn’t appreciate a well tended garden?), and depending on their skill, a significant bonus to the Development Growth in your realm capital.

[Image of the Court Gardener Court Position]​
And for reference, this is what the tradition looks like:

[Image of the Garden Architects tradition]​
Finally, we couldn’t show off Court Positions without showing the Court Jester, complete with a jester’s outfit! 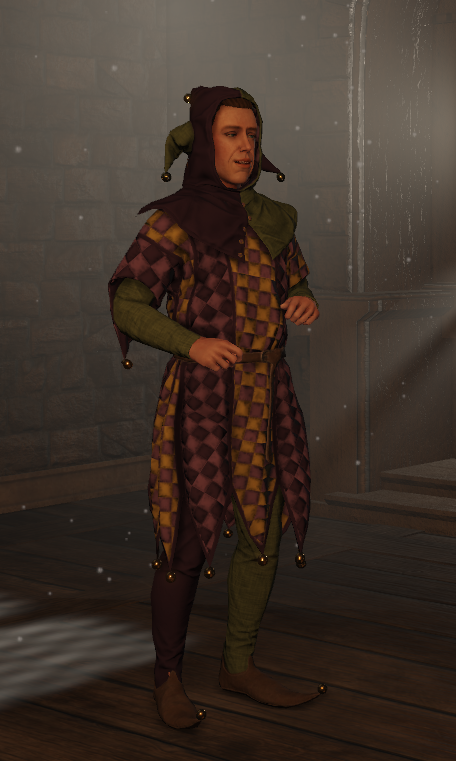 [Image of the Court Jester's clothing]​
That’s it for today!
Reactions:

I love the idea of getting hooks on my enemy's bodyguards to help my schemes
Reactions:

thank you! these are brilliant
Reactions:

You can hire up to two Bodyguards at the same time
Click to expand...

# of bodyguards is moddable, right?
Reactions:

Given the increased number of powerful agents in possible hostile schemes, does that mean agent join chance is being rebalanced? Currently, it’s a little too easy to murder kings and emperors because everyone in their realm joins
Reactions:

I love all of this. Huge amounts of flavour.

One question I have is: have the team considered anyway to combat the fact that you always know who NOT to appoint to such positions, based on looking at the opinion number? Similarly with Spymaster and so on. Since you always know if somebody likes you, there's a really obvious rule of "don't appoint people who don't like you to this role", which kinda entirely takes the risk out of the equation. I'd love to know if there are any vaguely formed ideas to combat this phenomenon.

EDIT: On a related note, another problem is it's so easy to assassinate AI because they DON'T follow this obvious rule, and so you can often get these powerful agents to join schemes easily.
Toggle signature
The Galactic Community and the AI
Reactions:

Does this mean that there are title specific positions? Do the electors of the HRE have special positions too?
Reactions:

This is great!
Are court positions moddable?
Reactions:
D

Is it still possible to assign your Council members to these court positions? For example:
And if so, can a single character hold more then 1 of these positions?
Toggle signature
On CKIII - The "It's not historical" argument is a fallacy. Are we playing a game or watching a movie?
Reactions:
C

I welcome these additions!
Toggle signature
Check out my WIP mod Europa Magnifica, which will add thousands of new provinces and rulers: https://discord.gg/AesYGmSpqZ
Reactions:

I really like how this plays into plot agents - I just hope the AI will understand that too, and particularly consider traits like paranoid and trusting into whether they appoint people to such positions and who they trust.
Reactions:

"YES MY ROYAL FOOL HAS ARIVED IN THE MAIL." *unwraps box* "Wow, it my rival Sir Legous Of Catenary. SQUIRE BRING ME MY QUILL! I must write to my Stewarts for this great present."
Reactions:

So, jesters are paid more than court physicians?

I wanted to say how it's completely unrealistic, but then I realized how my earnings as an electrical engineer are much lower than of those who work in entertainment/showbusiness.

I look forward to playing with this. Sounds great.

I do have a question though: Given that there seem to be a lot of court positions that are supposed to protect you against being assassinated, can we expect the AI to be a little more aggressive in scheming against the player than they are right now? At least as a game rule?
Reactions:

What are the cultural equivalents to Court Jesters outside of Western Europe?
Toggle signature
Bug report: Finnish naming inconsistencies
Reactions:

Let's say I appoint my hated cousin, who is a powerful Duke in my realm and is on my council, to the position of Court Jester. Would he be forced to wear this outfit even in his own court?
Reactions:

Can you appoint vassals ou just courtiers to these positions ?

Would appointing a vassal (or someone from a vassal's family) as court jester decrease their opinion of you ?

Thanks for all the work.
Toggle signature
Last words are for fools who haven't said enough
Reactions:
S

Can courtiers refuse positions? For instance I'm not sure if my rival would comply if I made him my court jester
Reactions:

I assume that landed vassals can't hold court positions? And in result also a player can't hold such position?
Reactions:

Will there be a court poet?