Jump to latest Follow Reply
Menu
Install the app
You are using an out of date browser. It may not display this or other websites correctly.
You should upgrade or use an alternative browser.
Crusader Kings III 14246 MP Open Beta Feedback 25 Bug Report 9421 Tech Support 1229 Multiplayer 106 User Mods 1297 AARs (After Action Reports) Suggestions 3852
Previous dev diary Next dev diary
Show only dev responses 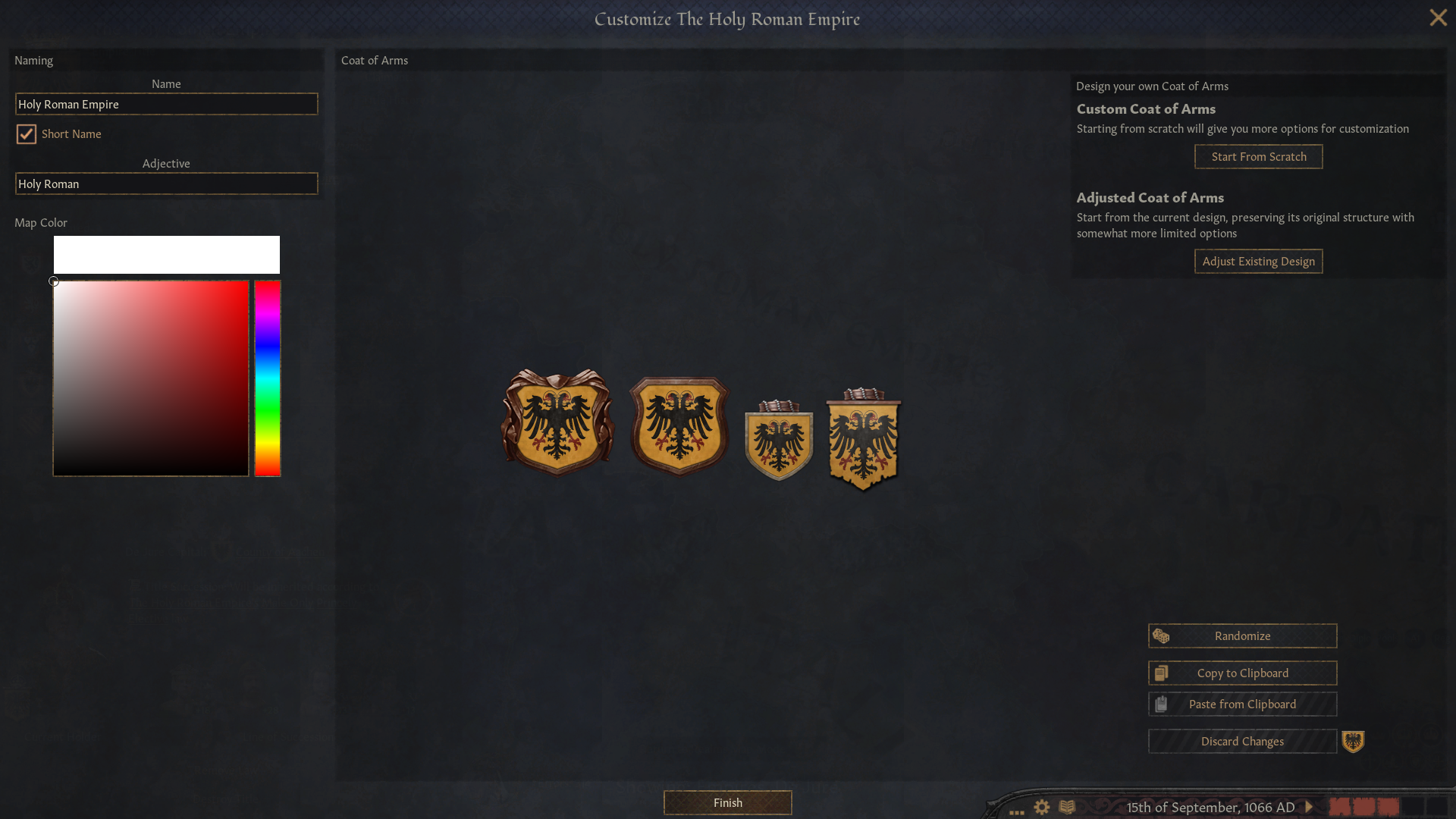 Hello everyone and welcome to the 71st CK3 Dev Diary!

I’m Matthew, one of the Programmers on the CK3 team, and today I am going to talk to you about one of the free features in the upcoming 1.5 patch: the much requested Coat of Arms Designer!

I don’t think the idea needs much explanation, this feature lets you edit the coat of arms used for your titles, dynasty, and house in game and from within the ruler designer to create your own stunning medieval crest.

I think it's easiest if I just show you, should go without saying by now but everything here is still under development and the interface is a work in progress and stands to be tweaked, shuffled around the layout and sizes changed by art.
But right now here is what you will be greeted by now if you enter the customization window for the Holy Roman Empire: 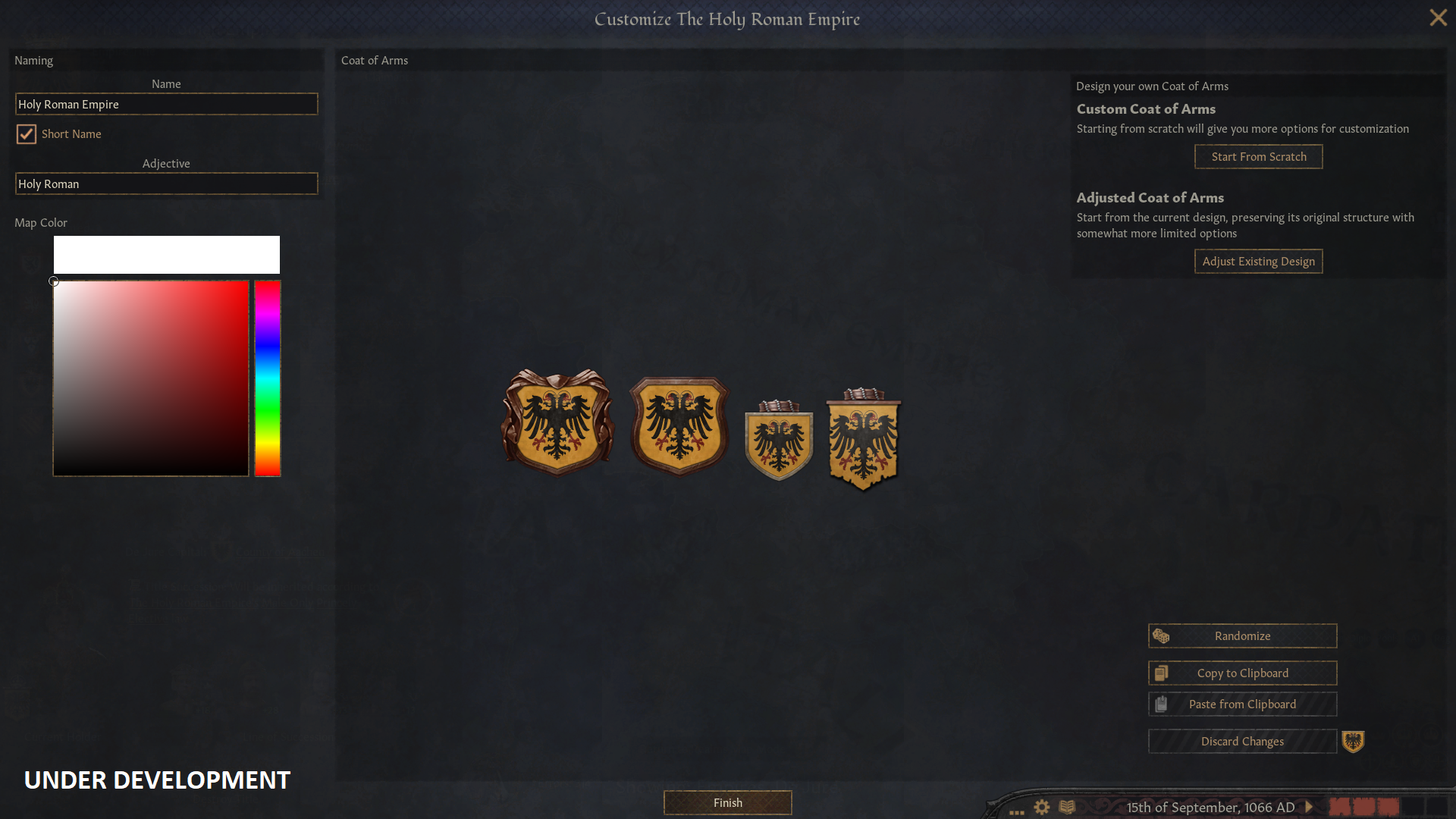 In the center you get the preview screen of the coat of arms as you edit it and to the right some options of what to do.
I’ll start with the bottom right options:

The meat of the system comes in the form of customizing your coat of arms from scratch or adjusting the existing one, both share their core components but adjusted mode is more limited if you want to take a pre-existing coat of arms and just tweak it a bit.
The reason adjusted mode is separate is that some historical coat of arms are made up of a lot of emblems in an order that whilst looks pretty in game is rather cursed if you were to try and see the full layout and background usage.

So for the bulk of this I will be using custom as the example to see how you can make your own heraldry from scratch and call out differences in adjusted mode where applicable.
The coat of arms designer has three main panels: background, layout, and emblems.

Starting with the background panel you can pick from any of the background patterns as well as pick what colours should be used. For all the colouring options in the coat of arms designer we provided a palette with some pre-selected colours that are used in heraldry generally and are what we use in randomization of coat of arms but we also give you a colour picker to let you pick whatever horrifying neon colour you want.
In the adjusted mode you cannot pick a background pattern but you can change the colours. 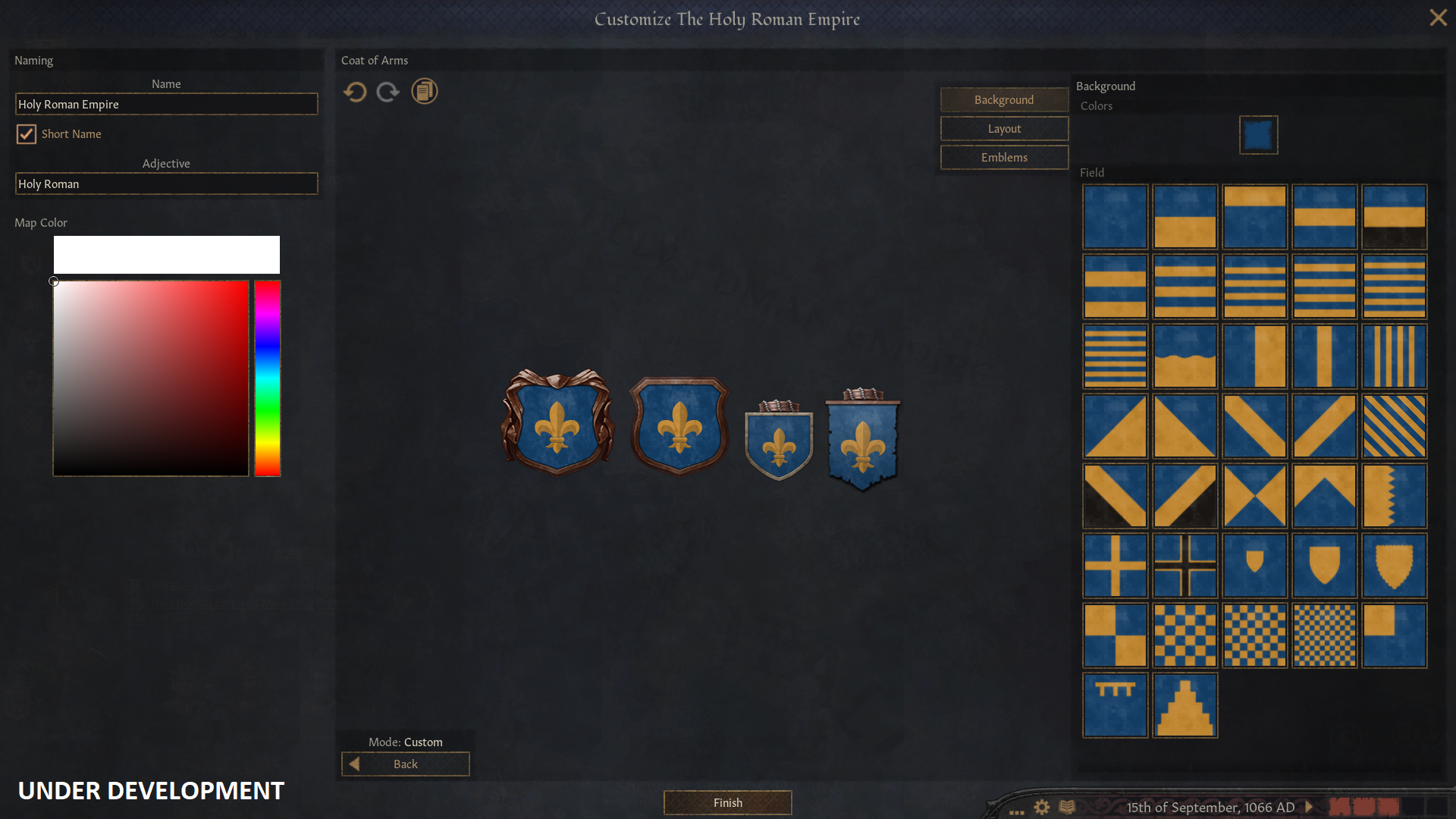 Next up we have the layouts panel, they dictate the overall amount and positioning of the emblems in your coat of arms. This panel is disabled entirely in the adjusted mode.

To preempt this question, yes there are only a few layouts in the picture (some even duplicates) and that is because the other preset layouts are currently being worked on so there will be more than this in the released version.
Though if you have any ideas for some cool layouts do let us know! Now is the perfect time to give us some ideas whilst the presets layouts are being implemented. 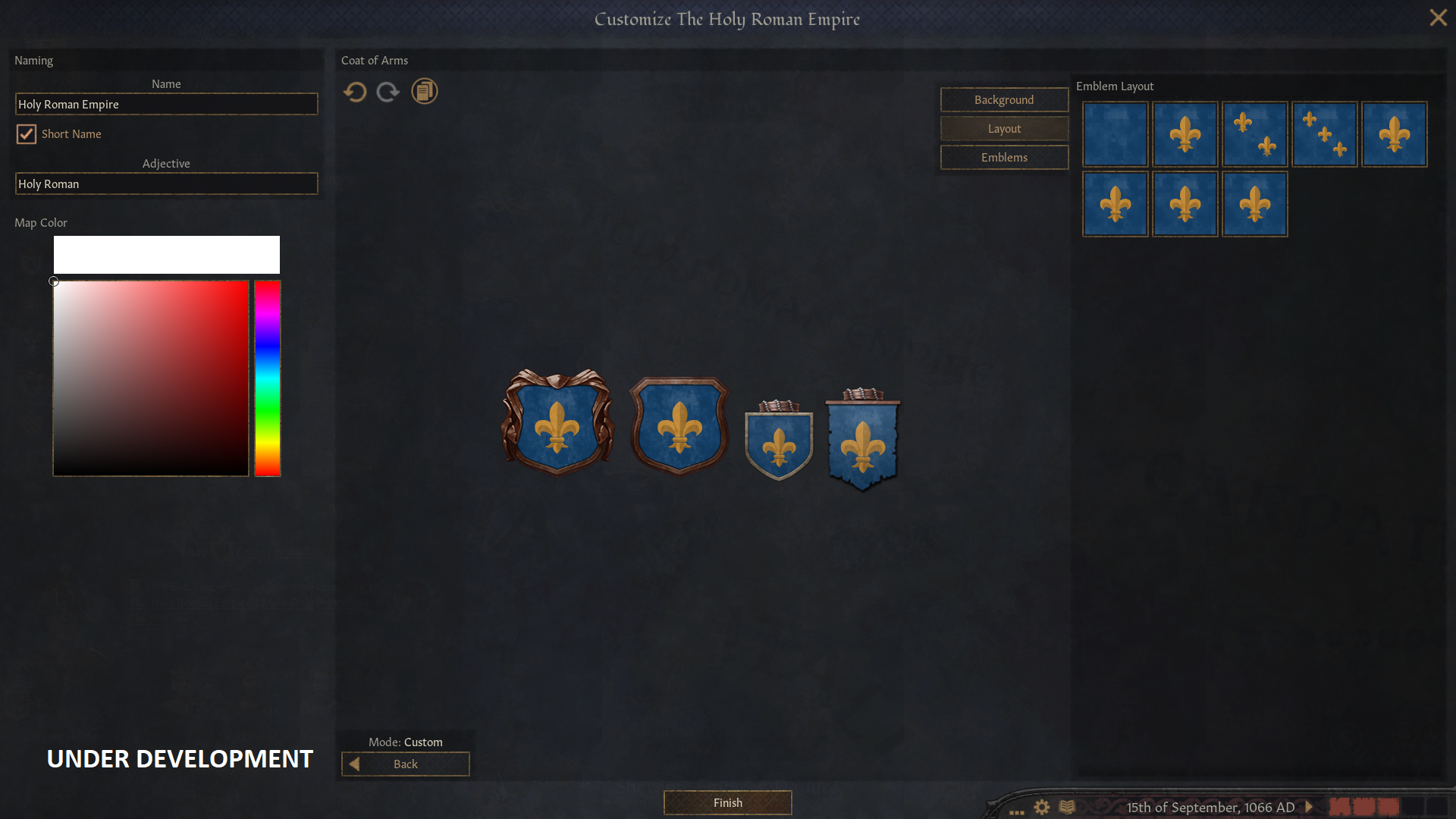 The bulk of time you will spend is likely to be in the final emblems panel, this lets you pick which of the over a thousand emblem textures that you want to use as well as how you colour them.

You can select which emblem instance you want to edit or select multiple of them by shift clicking, there is also a button to select all of them or reset your selection too so you can edit in bulk easier. 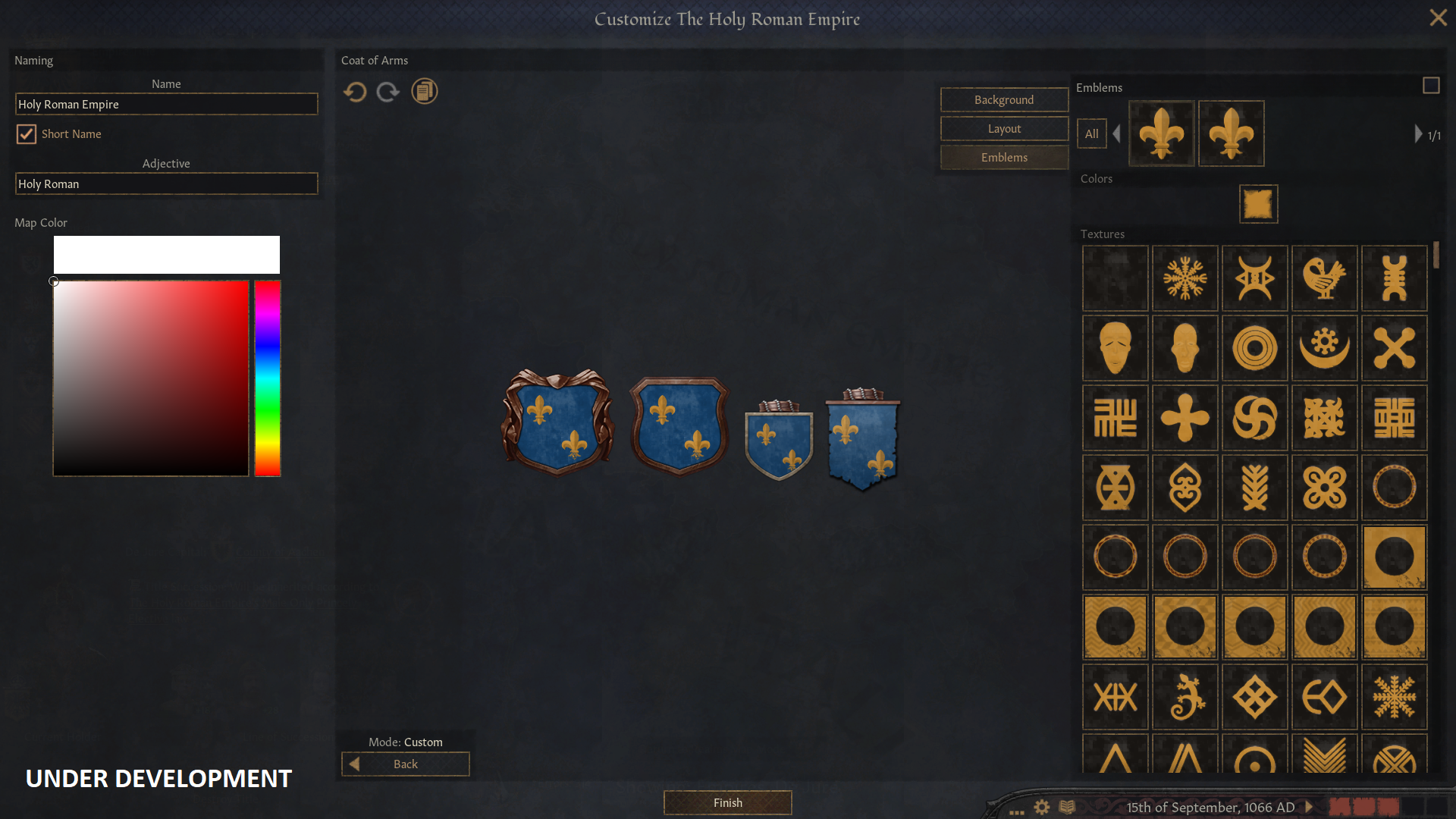 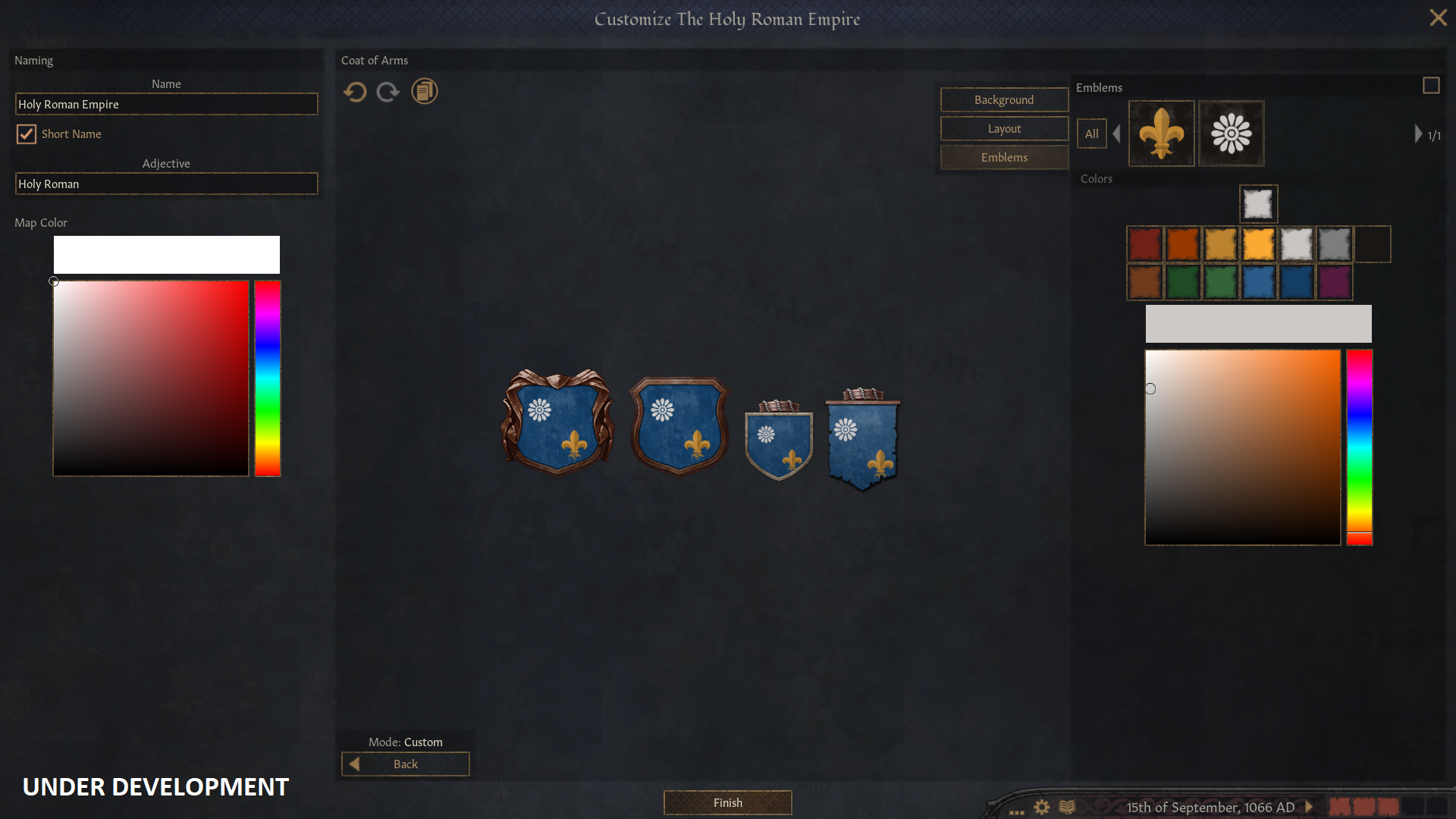 Since some historical coat of arms can have a lotttt of emblems we show them in a paged setup of 10 at a time for easier editing.
I used france a lot in my testing since it has so many to make sure things always worked on a large amount of them which has now ingrained into my brain that our france coat of arms has 33 fleur de lis on it.

To try and help the contrast of the emblems we set it so that the previews have a background that is either white/black to help things stand out better.

We also have a detailed edit mode which lets you go deeper and modify the exact positions, scale, and rotation of all your emblems as well as modify what layer they are on and even add and remove them to your heart’s content!
The UI of this mode is especially work in progress, especially the layering part of it, that will be tidied up before the release.

With the detail edit mode you can really end up with a custom coat of arms to represent the majesty of your dynasty, or as I’m sure some of you will do, try and find a way to make it look phallic as quickly as you possibly can. 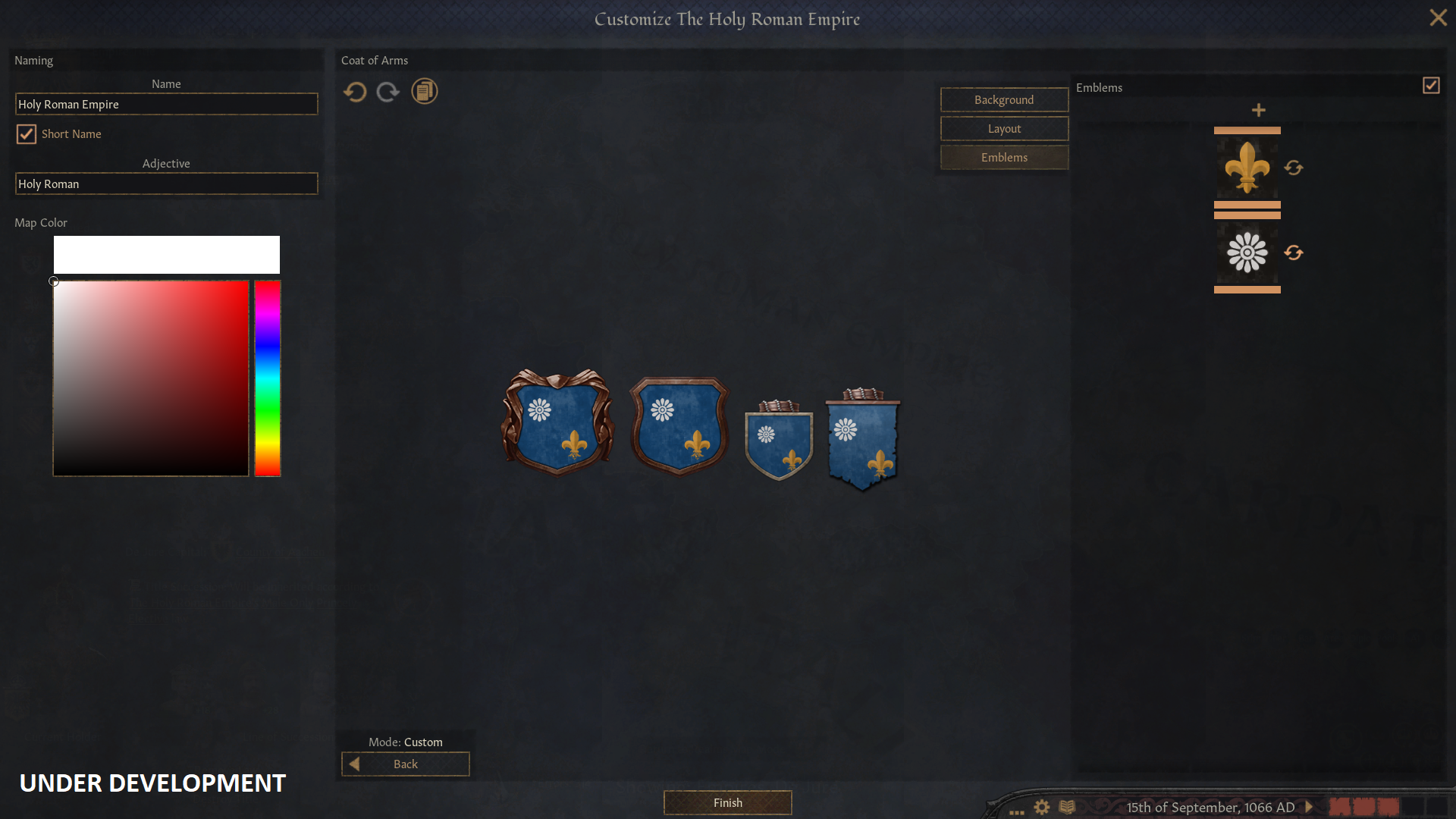 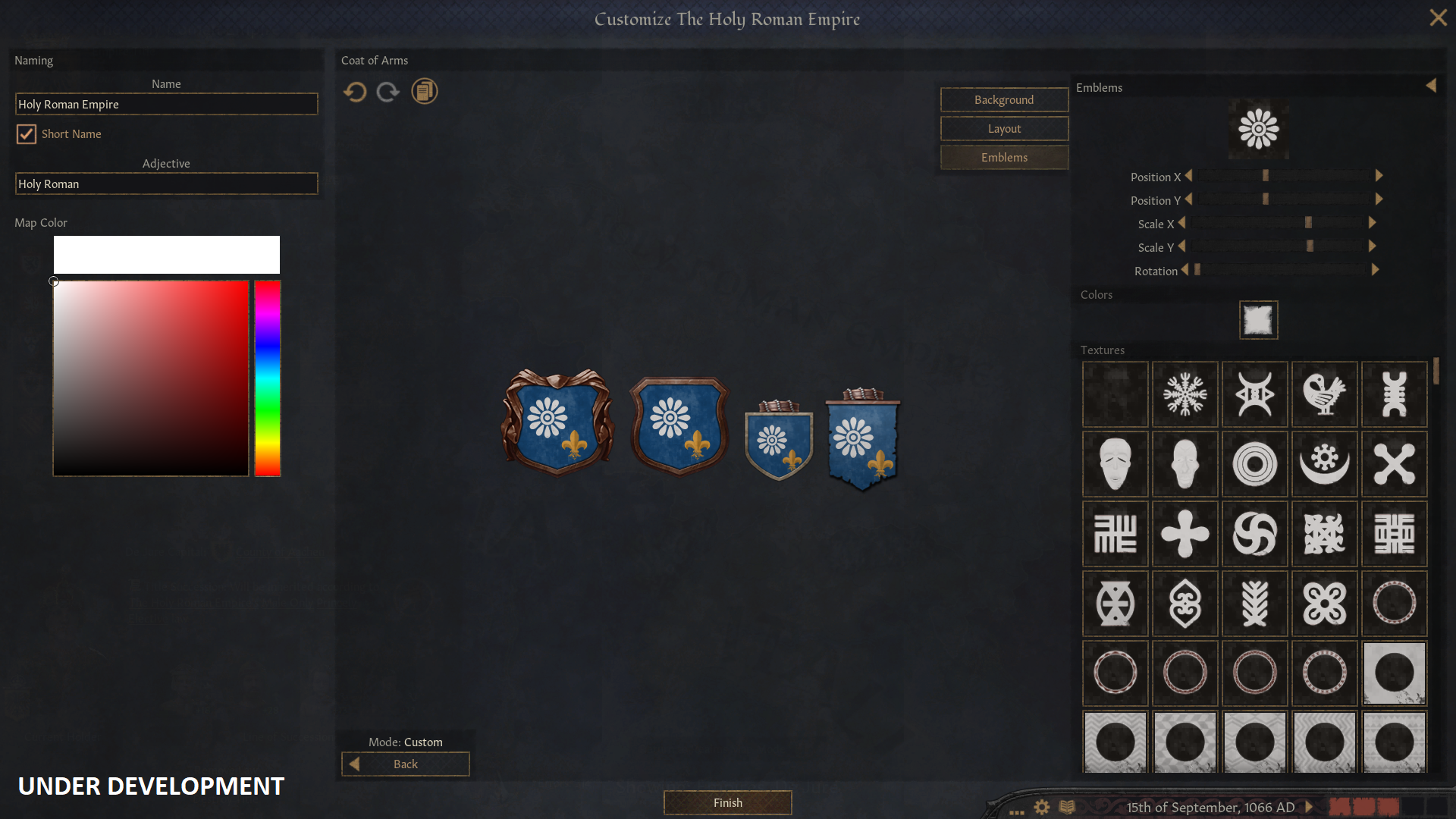 All of these edits also support an undo/redo system to make incremental changes easier.
Cadet Houses also get an additional option for if they want the quartering of their coat of arms enabled or not, in case you want to show your dad who’s boss.

That is a lot of words to explain this but let's be honest you all just want to see it in action so here we go:

Mini-shout out/commiserations to user “Lajos Tueur” who on Saturday released a mod to try and implement a coat of arms designer and had to fight against doing all of this very manually in the script with a hacky UI only for me to come in a few days later and release this dev diary.

That’s all for this week folks, thanks for tuning in and I hope you’re excited to make some majestic (or cursed) coat of arms for your rulers in 1.5!
Reactions:

Finally!.. people will stop asking about it after each DD even after it was confirmed to happen... probably
Reactions:

Thanks for the work, we knew you'd get around to it, can't wait for the dlc even more now.
Toggle signature
Last words are for fools who haven't said enough
Reactions:

Don't forget to have a look at our FAQ Royal Court, containing all the current known details about the upcoming CK3 Expansion!


And also, tis is your chance to win a Royal Edition for Crusader Kings III, on Steam!

The bulk of time you will spend is likely to be in the final emblems panel, this lets you pick which of the over a thousand emblem textures that you want to use as well as how you colour them.
Click to expand...

blackninja9939 said:
In the center you get the preview screen of the coat of arms as you edit it and to the right some options of what to do.
I’ll start with the bottom right options:

Reminds me of my last time in the character creation screen.

After that, I turned into the Hulk.
Toggle signature
Googel translator is my friend.
Reactions:

Will you be able to change your primary title's coat of arms into your dynasty coat of arms?
Reactions:

This looks a lot better to use than the one we had in Ck2.
Looks like the wait for it was worth it.
Toggle signature
Culture: Real Saxon(Not an eastern Faker) German
Religion: Weird Germanic Neo-Paganism with Animist Characteristics
Traits: Depressed, Lunatic, Stressed, Quick, Gluttonous, Slothful, Wroth, Humble, Chaste, Ambitious, Cynical, Just, Shy, Stubborn
"When in Doubt, Assassinate with a Manure Explosion."
"Friendships end, where borders begin."
"Let us Holy War each other in absolute Harmony!"

trying to create something along these lines 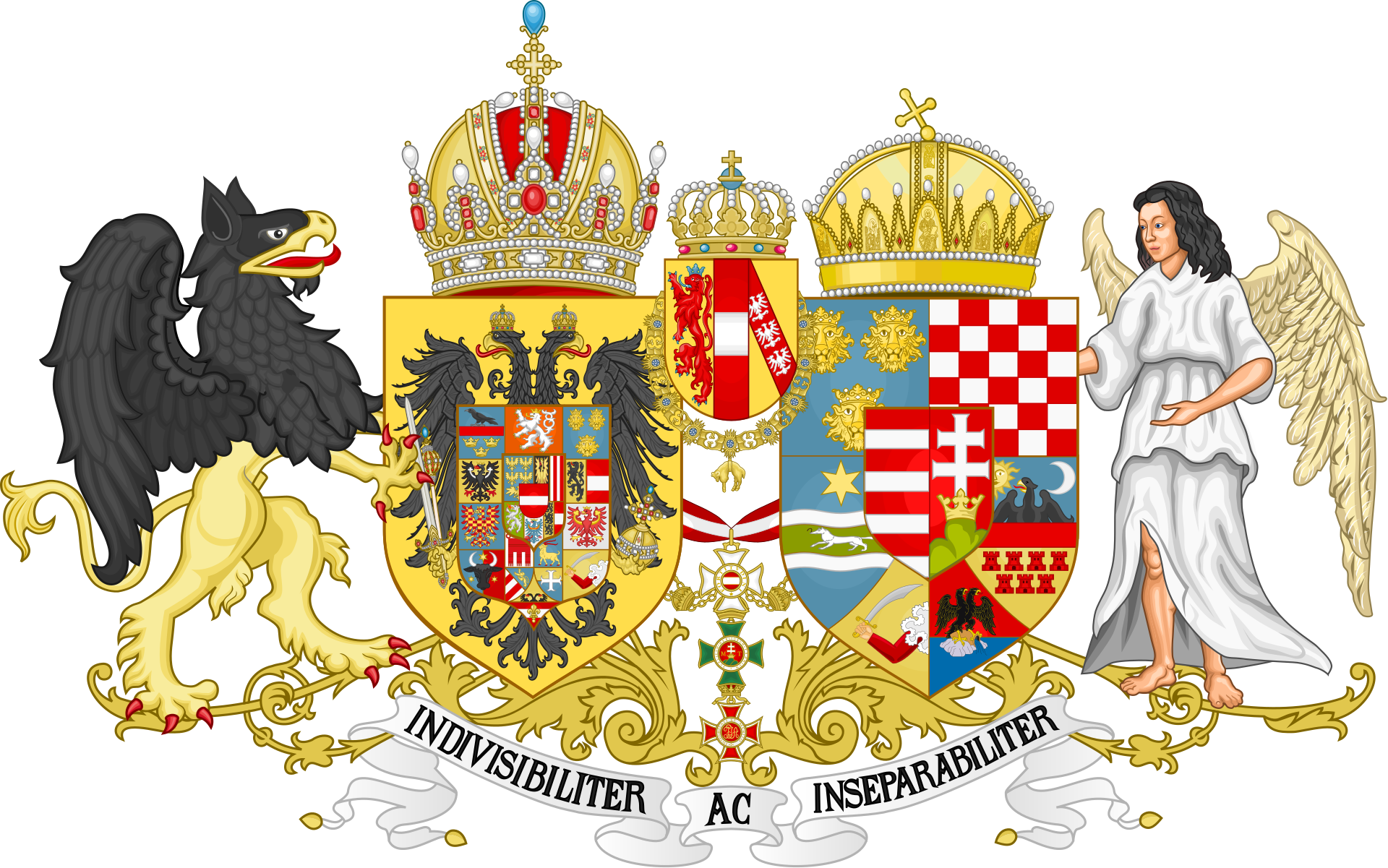 guglik0 said:
Will you be able to change your primary title's coat of arms into your dynasty coat of arms?
Click to expand...

Yes, you can. Copy and paste from clipboard is a wonderful thing
Toggle signature

Yes!.
Toggle signature
On CKIII - The "It's not historical" argument is a fallacy. Are we playing a game or watching a movie?

This looks a lot better than the monstrosities we saw in CK2.

Is it possible to set a mask to the emblems, like the one in the Latium duchy?

Could you add a "keep proportions" checkbox when resizing emblems? I wouldn't want to fiddle with "scale x" and "scale y" to match them manually.
Last edited: Aug 31, 2021
Toggle signature
My mods: Fullscreen Barbershop for CK3, Better UI for Imperator, Elegant Galaxy for Stellaris
Reactions: