Jump to latest Follow Reply
Menu
Install the app
You are using an out of date browser. It may not display this or other websites correctly.
You should upgrade or use an alternative browser.
Crusader Kings III 14944 MP Open Beta Feedback 26 Bug Report 10072 Tech Support 1363 Multiplayer 119 User Mods 1388 AARs (After Action Reports) Suggestions 4081
Previous dev diary Next dev diary
Show only dev responses
CK3 Dev Diary #67 - A View to a Map​
Greetings!

The team is slowly coming back together after a well deserved summer vacation. Today, let’s have a look at what we’ve been doing to the culture setup and some small scale map tweaks. Most of the work we’ve spent on cultures has naturally gone into the cultural overhaul itself, but we have made some general improvements as well, most notably over in India.

Starting with a small culture addition in southern Europe, and that some of you keen eyed readers noticed back in a previous dev diary, we’ve added back a fan favorite from CK2; Carantanian. The culture is quite extensive on game start and covers most of south-eastern Bavaria. From a historical point of view, the culture is of a west slavic origin, but as they got cut off from their ancestral brethren in the Carpathian Basin, they became gradually closer to the south slavic peoples. We represent this by Carantanian having a West Slavic Heritage, but speaking a South Slavic Language. 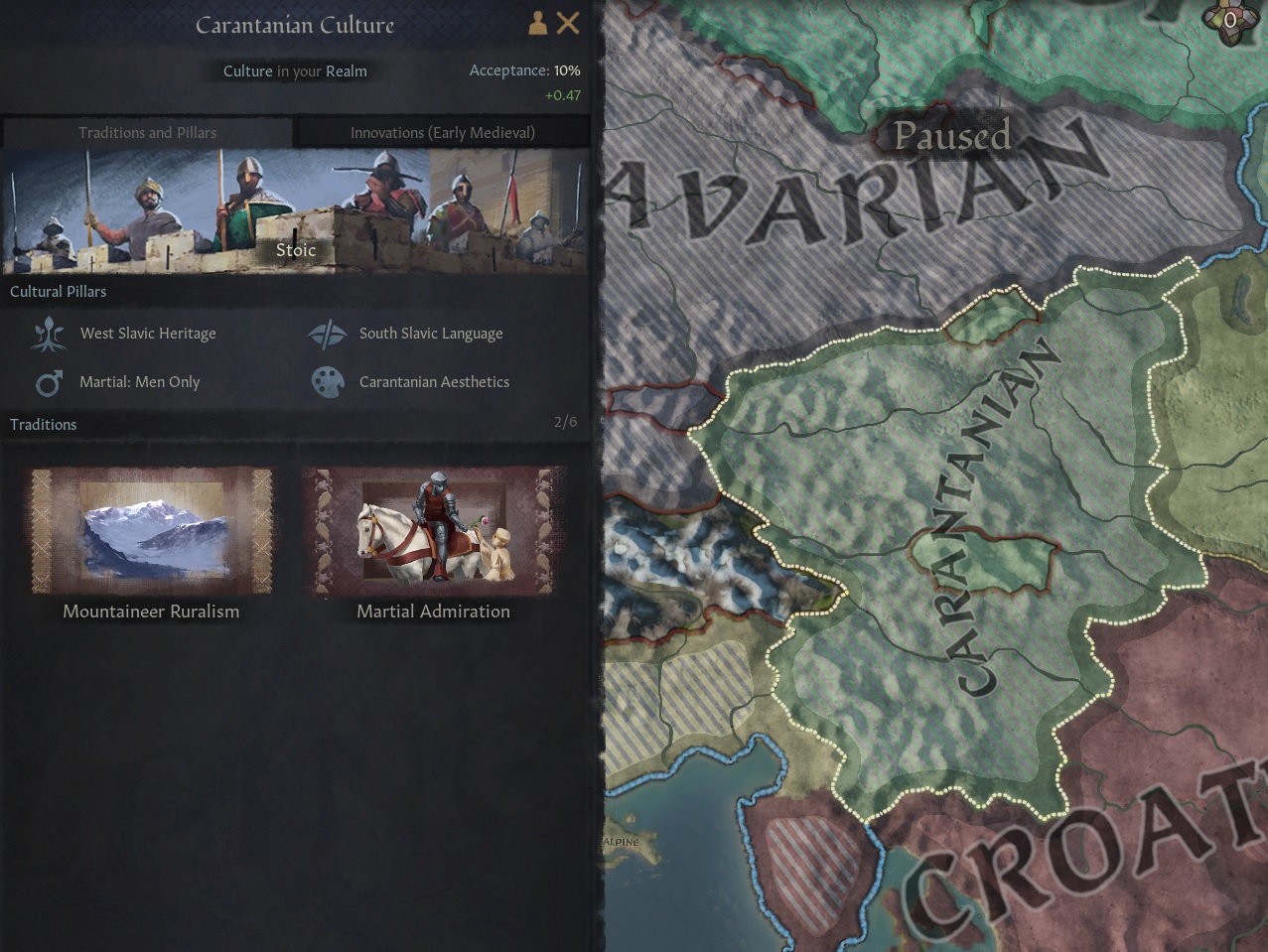 [Image of Carantanian culture]​
Next, I’ll hand it over to our local India expert, @Trin Tragula, to talk about (you guessed it) India!

Indian Culture Changes
The culture rework has been a good opportunity to rework the cultures in India a bit. The current setup here is one we inherited from Crusader Kings 2 and it was in some ways not entirely appropriate for our era. To better reflect the diversity of the subcontinent we have added two new cultures, changed the old ones a bit and also added a great number of potential culture names for when the large starting cultures diverge.

First of all we have gotten rid of Hindustani culture, and two new cultures have been broken away from what it used to cover in the south. The core part of the culture covers the Gangetic plain, and is now known as Kannauji after the Imperial city of Kannauj (Kanyakubja) which was the main prize of the region and often gave its name to it.

Hindustani itself is still around in a way, as a possible name for a cultural hybrid between an Iranian or Turkic culture with one of the north indian cultures. 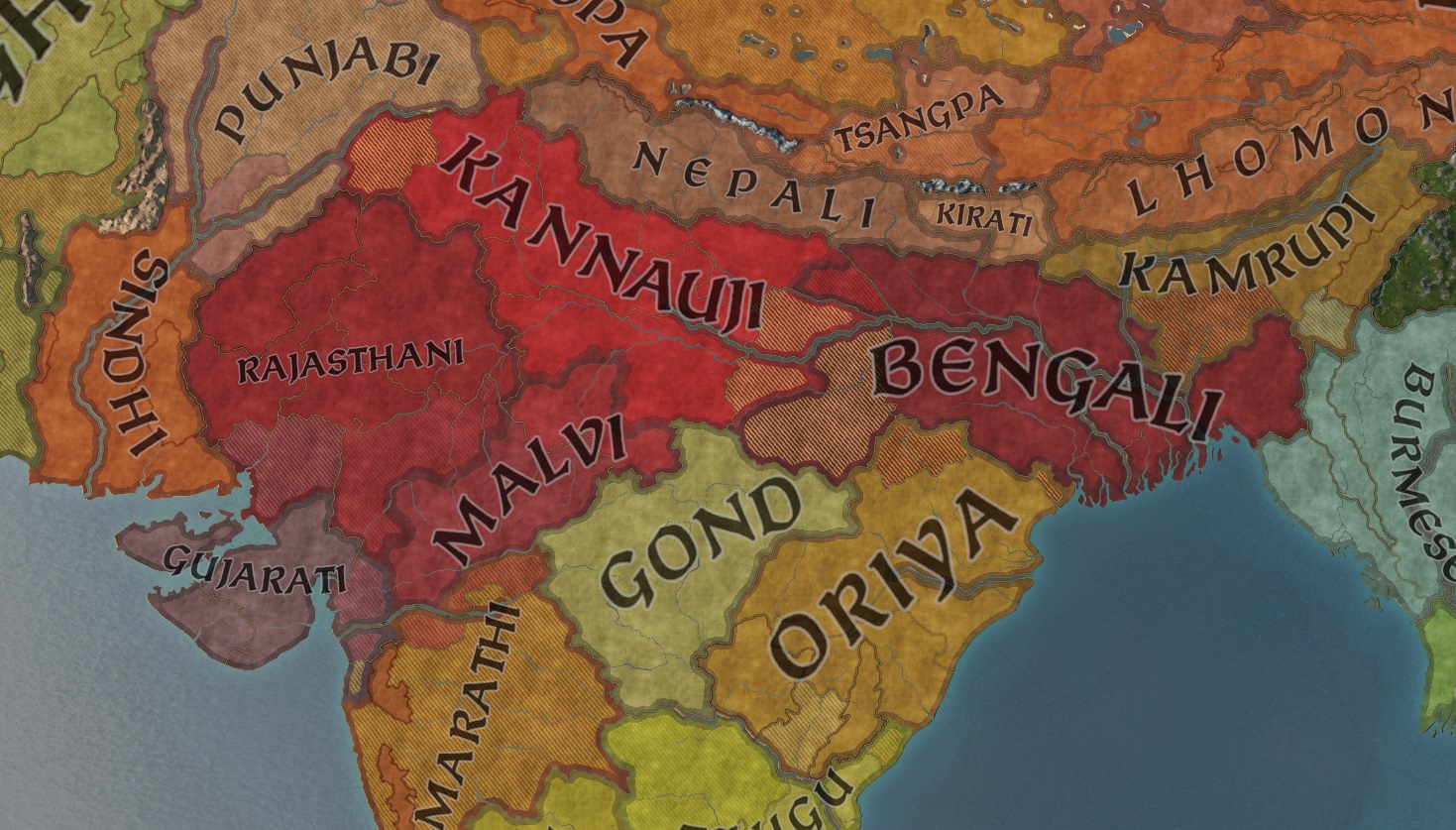 [Image of the cultures in northern India]​
Starting in the central parts of India the newly added Gond culture has been carved out of areas that were previously Hindustani, Marathi or Oriya. In 1066 most Gond counties are under the control of the Cedi kingdom and many of these counties are now also tribal at start. This culture covers a region that was in an odd place in the old setup, at the border of several cultures but not quite belonging to either of them. 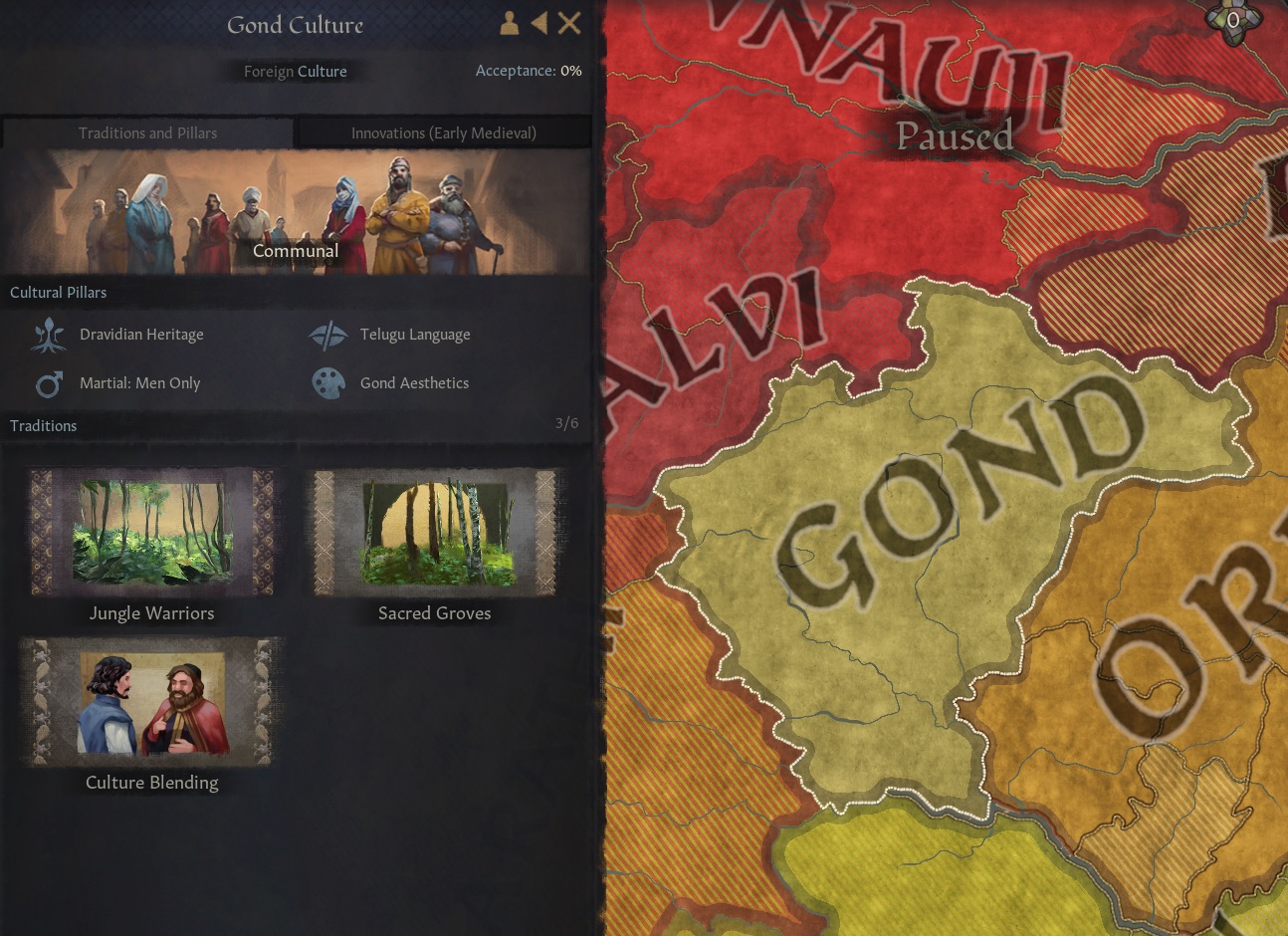 [Image of the Gond culture]​
Covering the Malwa plateau as well as some of the adjacent regions that were previously considered Hindustani. This new culture shares a language with the Rajasthani and Gujarati cultures, Gurjar Apabhramsa. The existing Rajput culture has been renamed to Rajasthani (since Rajput as a cultural distinction does not really fit our start date) and Assamese is now known as Kamrupi. 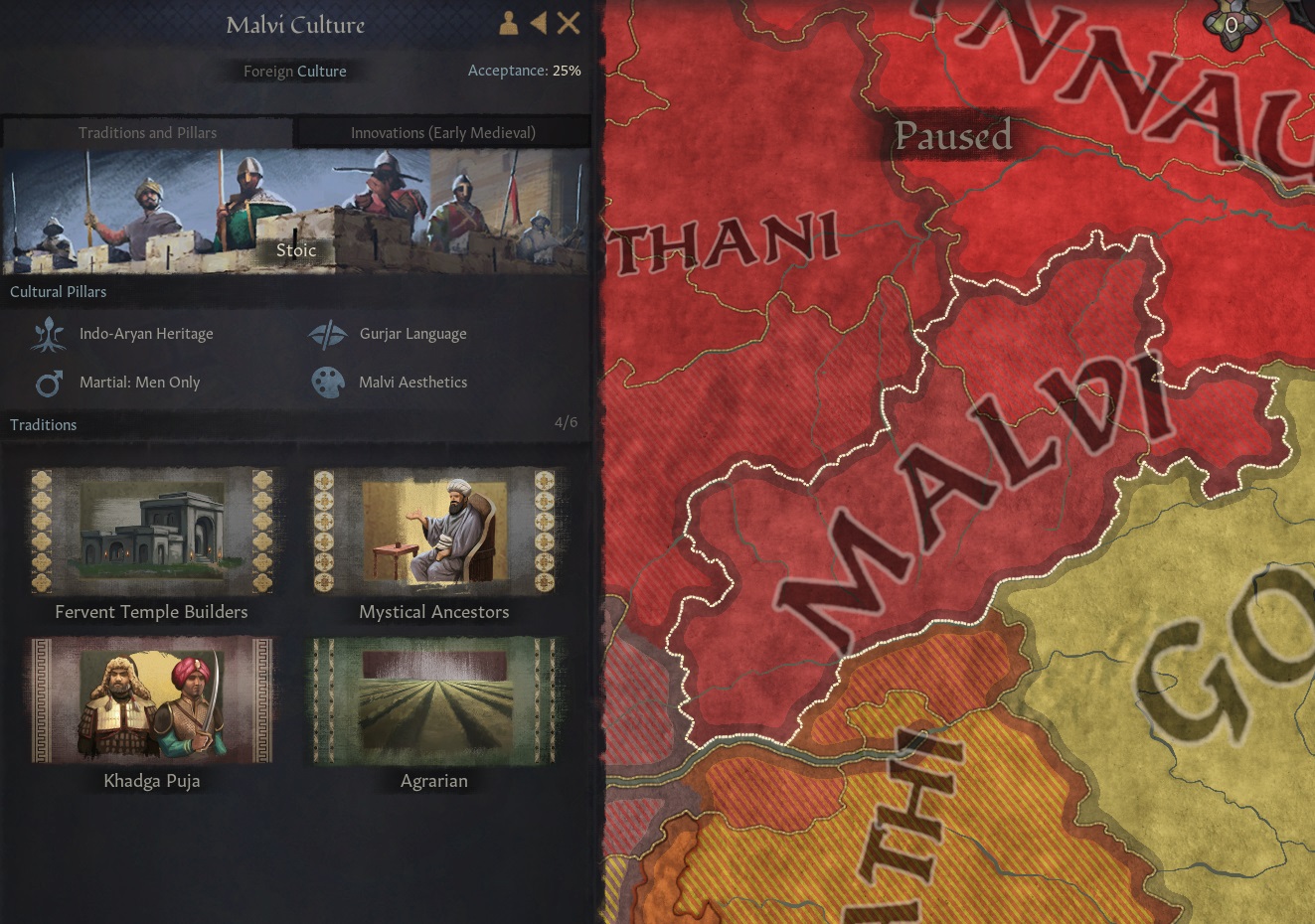 [Image of the Malvi culture]​
Indian History and Title Improvements
While looking over the subcontinent it was also clear that in some areas the title setup was also better suited for the early modern era, rather than the medieval era around Crusader Kings III start dates. A number of baronies have been renamed and reorganized into new counties, and a number of new vassals have been scripted in, especially for the 1066 start.
The starting presumptions about who controlled what in 1066 have also been revisited to bring things better in line with history and create a more interesting start. There are now more starting characters, both independent and vassals, and most kings will no longer start above their domain limit.

Some things like the crisis of the Chola empire should also be a bit better represented in the initial setup, with strong and somewhat unruly Pandya vassals, a much stronger Lankan revolt and the Chera Raja now independent (with his historical vassals to support him). You can now also play as the future king, Kulottunga.
There are also other, minor changes, such as revisiting the extent of cultures like Kashmiri, and Telugu, and assigning a number of tribal counties in the eastern-central part of the subcontinent. 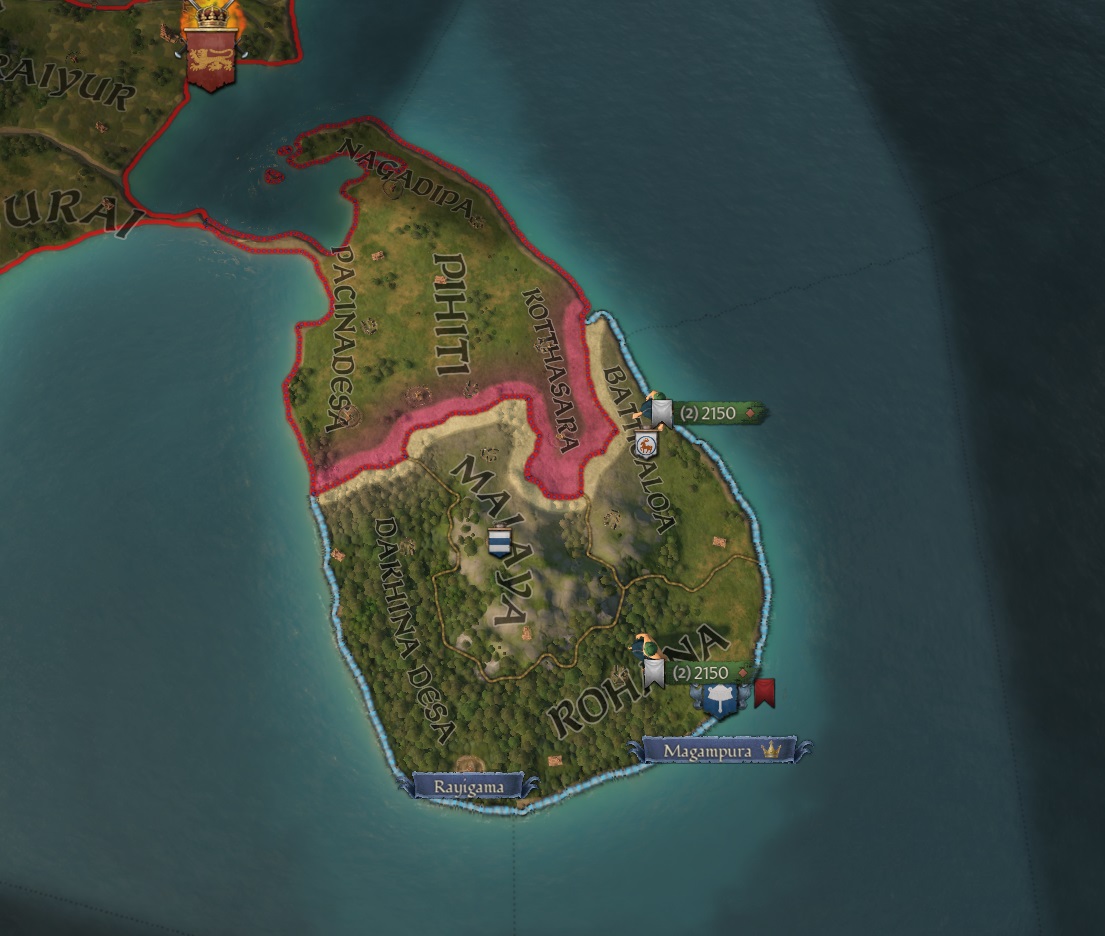 [Image of the Sinhalese rebellion in 1066]​
That concludes today’s dev diary. Until next time!
Click to expand...

Great improvements!
One question: when we will know something more detailed about the Royal Court itself?
Reactions:

Anybody have recommendations for a book to learn more about the history of the region at this time period? I've always been hesitant to play in India because I know very little of its history, and I'd love to change that.
Reactions:

The release date of the release date, when?
Toggle signature
The sole developer who is responsible for the modern-day open-world supernatural RPG called [NEOLITHIC] on Steam.
Can you find this secret game?
Reactions:
A

TheMind said:
Great improvements!
One question: when we will know something more detailed about the Royal Court itself?
Click to expand...

Waiting on this too. Culture stuff is okay but not particularly exciting for me.
Reactions:

Nice changes. Is there a Dalmatian culture in the Eastern Adriatic shore? Current setup has a Greek culture in some counties, which serve as a placeholder anyway. Remember, Dalmatian language went extinct only in 1898.
Reactions:

Ooh cool. I am really happy to see the replacement of Hindustani as a Hybrid culture, and the inclusion of the Gond and Malvi cultures.

Some questions about the Indian Setup:
1.) Do the Three Tamil Dynasties now follow Shaivism as they historically did?
2.) Like wise do the Pratiharas follow Vaishnavism?
3.) I am curious why is the Bihari culture not included as being seperate from Bengali? Pala Empire came out of Bihar after all, and bengali culture was never that far west.
4.) I noticed you did not show southern india's culture map. Is the area of Kerala still Tamil or does Malayalam now exist there?
5.) Why is the Gond language Telugu and not Gondi(which itself is just the largest of the god languages)?
6.) Likewise why is the Malvi culture speaking Gujarati and not Malvi?
7.) Can you tell us what all the new traditions do?

harrisonbobo said:
Dalmatian is a dog breed you moron
Click to expand...

Not sure if serious...

harrisonbobo said:
Dalmatian is a dog breed you moron
Click to expand...

I'm surprised an pleased by the changes to the Indian setup. That region is so much better than in CK2 and it's only improving! Great work!
Reactions:

TheMind said:
Great improvements!
One question: when we will know something more detailed about the Royal Court itself?
Click to expand...

You mean as in the actual throne room? We aren't quite ready to show it off just yet, at least not in more detail than the early preview picture we posted in DD#61. You'll have to be a tad bit more patient I'm afraid, but it shouldn't be too long.

Joking aside. The moment we are ready to share it with you, you'll be the first to know.
Reactions:

Servancour said:
You mean as in the actual throne room? We aren't quite ready to show it off just yet, at least not in more detail than the early preview picture we posted in DD#61. You'll have to be a tad bit more patient I'm afraid, but it shouldn't be too long.
Click to expand...

And the other mechanics apart from the culture overhaul (minor titles, artifacts, etc)?
Reactions:

We are more than happy to interact with you all and answer your questions about Crusader Kings III & Royal Court, but tossing slurs at each others won't support the thread. If you have a problem with an other user, please report it to the mod team via the Report feature.
Toggle signature
Ex-Community Ambassador for Crusader Kings III
► Twitter Nicou
Reactions:

Not quite on topic of the Dev Diary, but will there be more unique decisions for certain cultures. Like recreating the kingdom of saxony for, well, saxons and their "descendents"
Reactions:

I noticed that the Language symbols on the Culture interface have lines through their mouths. What does this represent? Inability of your character to speak the language?

For modding, will the holding and count modifiers available to cultural Ethos and Traditions also be available to religious Doctrines? What about parameters that influence buildings, like the one that causes Shipyards to give control?
Reactions:

Sounds great. Been thinking that India lacked playable tags for a while, which made it a less varied and dynamic start than some other regions.

Harfus said:
Anybody have recommendations for a book to learn more about the history of the region at this time period? I've always been hesitant to play in India because I know very little of its history, and I'd love to change that.
Click to expand...

My own prospective digging turned up a recommendation from r/askhistorians: A History of India, Vol. 1: From Origins to 1300, by Romila Thapar. If you look at the index, though, it actually covers until the start of the Mughal period in 1526, which is even better for our purposes.
Reactions:

ajokitty said:
I noticed that the Language symbols on the Culture interface have lines through their mouths. What does this represent? Inability of your character to speak the language?

For modding, will the holding and count modifiers available to cultural Ethos and Traditions also be available to religious Doctrines? What about parameters that influence buildings, like the one that causes Shipyards to give control?
Click to expand...