Jump to latest Follow Reply
Menu
Install the app
You are using an out of date browser. It may not display this or other websites correctly.
You should upgrade or use an alternative browser.
Crusader Kings III 14696 MP Open Beta Feedback 26 Bug Report 9869 Tech Support 1301 Multiplayer 113 User Mods 1334 AARs (After Action Reports) Suggestions 3977
Previous dev diary Next dev diary
Show only dev responses
CK3 Dev Diary #66 - A Fresh Coat of Paint​
Greetings!

The sun is out, and we’ve all been enjoying pristine Azure skies during the Swedish midsummer celebrations. Or, well, a few of us have! Some members of the team got to enjoy a massive downpour of rain (which is customary, to be fair), and others even got to experience a refreshing storm of hail. Speaking of Azure, we’re releasing another small patch today which addresses a handful of issues (most notably some stability concerns):

Beginning next week a majority of the team will be going on summer vacation, which means that it’ll be mostly deserted for the next five weeks. In practice this means that the next few Dev Diaries won’t be as meaty as the ones that came before. You can think of them more as teasers than proper Dev Diaries. When we’re back we’ll of course resume having more substantial ones!

With that being said, we don’t want to leave you empty handed. Summer vacation doesn’t start until next week after all. Some of you might have noticed in the previous Dev Diary that we had a small square at the top of the window when creating a hybrid or a divergent culture, showing a colour. This is of course a preview of the colour your new culture will have when it’s created. Clicking it allows you to change and set the colour of your culture exactly as you want it! 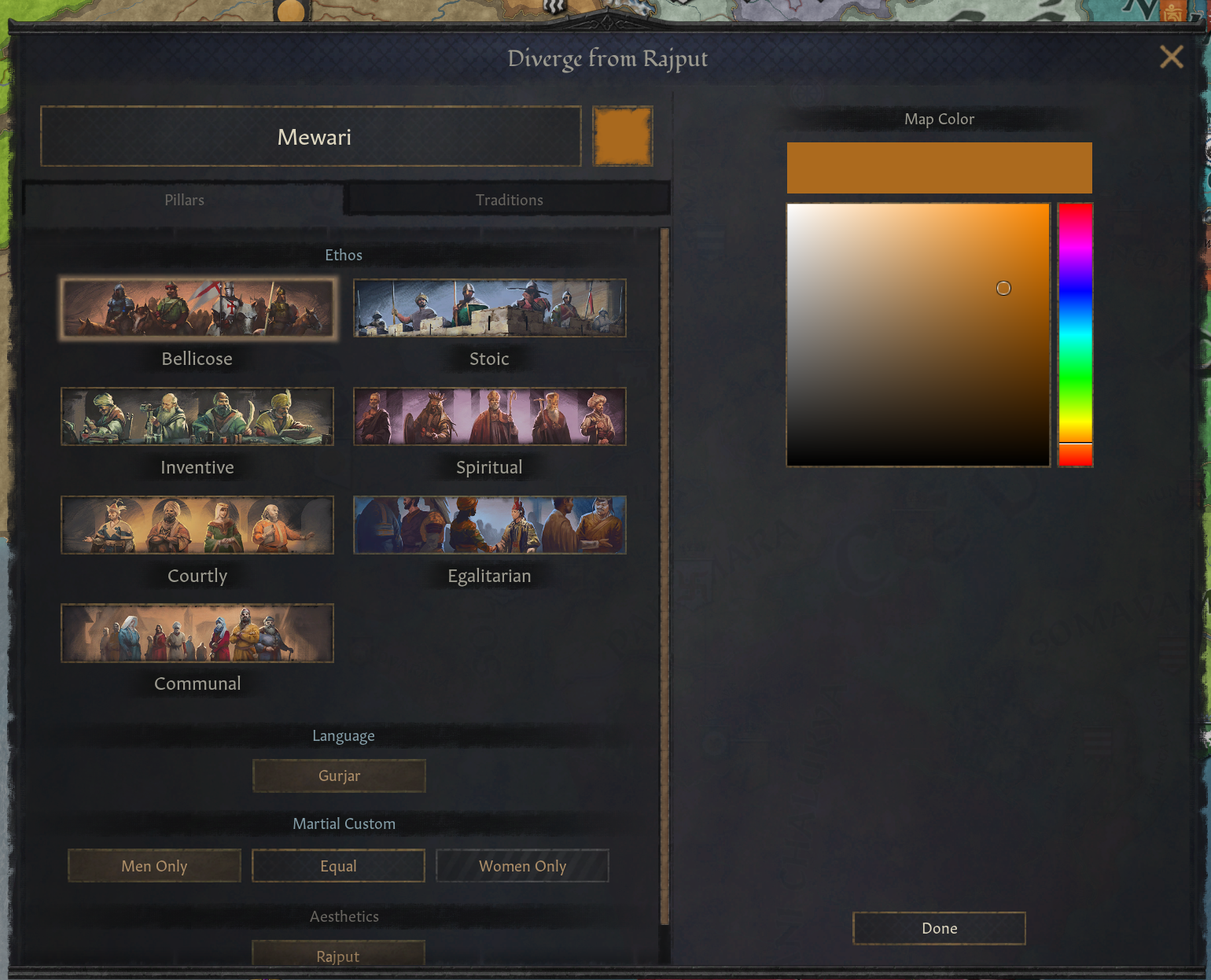 [Image of selecting a colour during culture creation]​
But we didn’t stop there! We added this new and wonderful tool in a couple of other places as well. As when creating a culture, we've added it for creating a new faith too. 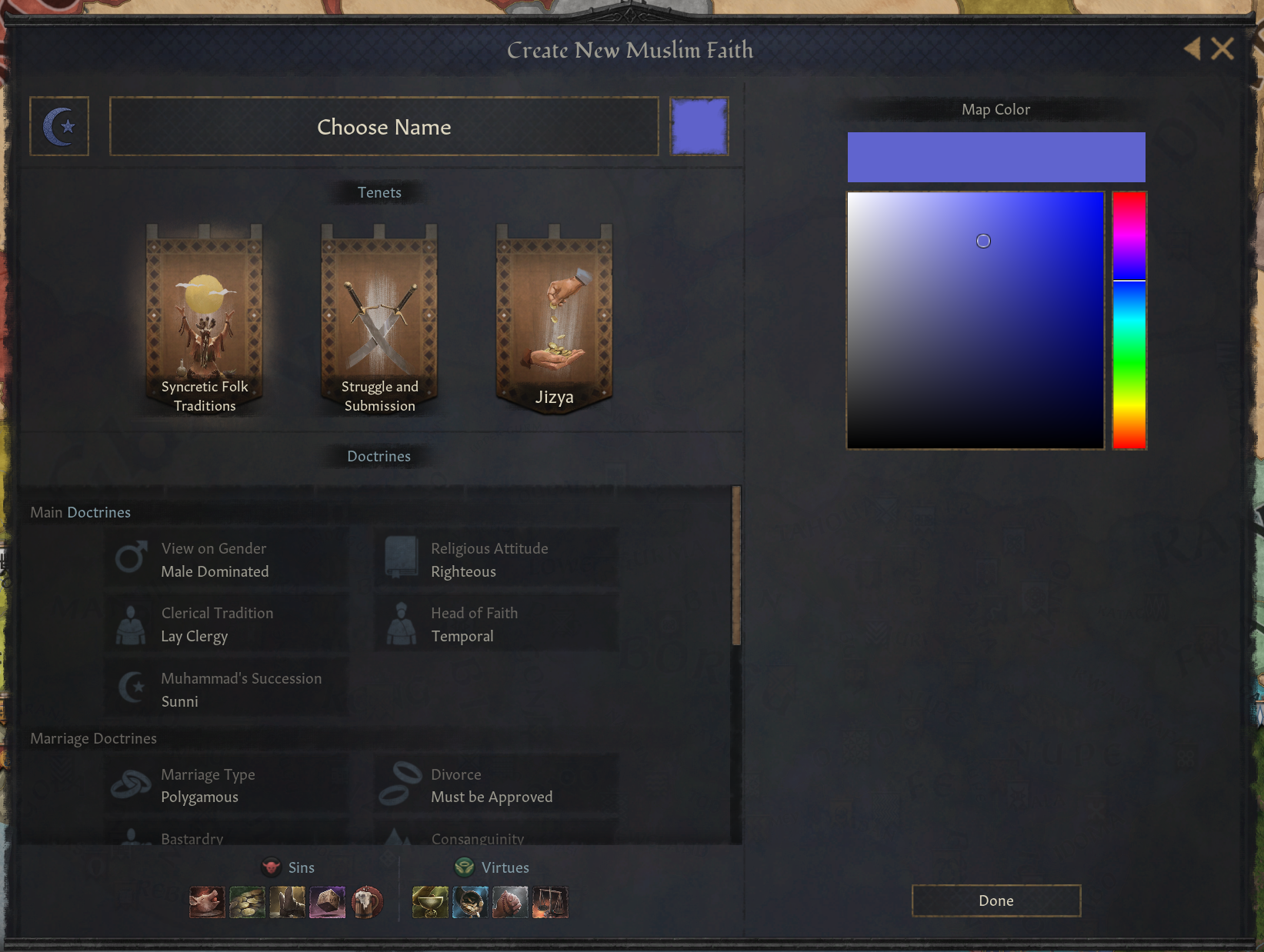 [Image of selecting a colour when creating a faith]​
You'll also be able to change the colour when customizing a title. No longer will you have to settle on the colour the game picks for you when creating a custom kingdom or empire! Especially when that colour turns out to be neon pink... You can edit the colour for any title you hold or is held by your vassals, similar to how you are allowed to edit the name & adjective for titles in your realm. Yes, this means that you can make your vassal lands sport a cavalcade of colour if you so desire!

[Image of selecting a colour when customizing a title]​
That's it for today, I'm afraid. While this might be a fairly small addition in the grand scheme of things, we do think it’s a nice and flavourful tool that lets you customize your experience more than before!
Click to expand...

C U S T O M I Z A T I O N !
Toggle signature
Owner of a Imperial Socialist P Ribbon ●
Kaiserreich 1.7 Ten Year Anniversary Released!
Winner of Preussen 1825 with my Vereinigte Preussische Partei!
Winner of Britain 1950 with my Communist Party of Britain!
Winner of Denmark 1900 with my Tyskliberala Monarkistpartiet.
DId I mention Kaiserreich is out for HoI4?!!
A Town We Never Forget! My newest AAR
"We don't do marxistic historical games, where its mandatory that some countries will always fail." - Johan
Follow me on Twitter!
Biji Kurdistan!
​
Reactions:

It would be nice if you also added a button to reset the color to the original value, if you want to undo any changes made.
Reactions:

Holy Moly Macaroni!
This is a small, but glorious Dev Diary!
Finally we can choose our own colours!
No longer are we burdened with a terrible pink!
Now we can make one that's even worse!
Toggle signature
Culture: Real Saxon(Not an eastern Faker) German
Religion: Weird Germanic Neo-Paganism with Animist Characteristics
Traits: Depressed, Lunatic, Stressed, Quick, Gluttonous, Slothful, Wroth, Humble, Chaste, Ambitious, Cynical, Just, Shy, Stubborn
"When in Doubt, Assassinate with a Manure Explosion."
"Friendships end, where borders begin."
"Let us Holy War each other in absolute Harmony!"

Awesome!
But could you please add fields to enter the exact RGB values?
Reactions:

King of the Crescent

Does this mean Coat of Arms customization is coming too ?
Reactions:

Colour customisation is great! Is the new religion crest also changing colour? Or is this just for the culture map mode?


Having said that, if this was the last big dev diary before the five weeks of crumbs… I’m not expecting much at all, thanks for letting me know in advance ah
Reactions:

Will it be possible to pick a very specific colour with rgb or hex code? If you want your culture and religion to be the exact same colour for example?
Reactions:

It would be perfect to have a palette of good-looking presets in addition to the universal colour picker...but it's a great feature nevertheless. I was irritated by a tacky realm or religion colour way too many times. Finally, I would be able to choose my paint in the map painter!
Reactions:

Cool! Have been asking for this for titles but this is even better.


Now... what about allowing it to pick us our clothing color? I've tried to find it in savefiles but apparently it's hidden somewhere where it can't be easily edited. Any plans to eventually allow us to choose between those blue, red, white dresses?
Also, will it be possible to edit colors of already existing cultures and religions in-game? Even if not by default, would it be possible to modders to add this color choice for existing religion screens?
Reactions:

There is no button to go back to the original color
Reactions:

The problem with the colour wheel is that it's stressful. As a colourblind person, the Sim 3 was always a bother because it forced you to be creative when you really just wanted to choose from base colour options or premade options. I also support a reset button.
Reactions:

I love the customisation option & the new communication strategy of no more radio silences, but teasers.

Speaking of teasers, I assume it is a pure chance that this DD is called a coat of paint, tight?
Reactions:

I made a suggestion a week ago asking for this, so I'm extremely happy to see it's going to be implemented!

There are already comments asking for options to reset or enter manually the RGB values, but I would like to add two small suggestions :

Ksiendzu said:
There is no button to go back to the original color
Click to expand...

Voy said:
The problem with the colour wheel is that it's stressful. As a colourblind person, the Sim 3 was always a bother because it forced you to be creative when you really just wanted to choose from base colour options or premade options. I also support a reset button.
Click to expand...

While we're talking about fiddling around with colours - perhaps letting us choose the colours of our character's clothes might be something you could add in the future.
Reactions:

Have a great vacation!
Reactions:

When I saw title, "A fresh coat of paint", I was nearly sure that is about Coat of Arms designer but, oh well this is also nice, smaller, tiny feature but giving more customization options and flavor to the map nice!
Reactions:
Show hidden low quality content
You must log in or register to reply here.
Share:
Facebook Twitter Reddit Tumblr WhatsApp Share Link
Top Bottom