Jump to latest Follow Reply
Menu
Install the app
You are using an out of date browser. It may not display this or other websites correctly.
You should upgrade or use an alternative browser.
Crusader Kings III 14936 MP Open Beta Feedback 26 Bug Report 10053 Tech Support 1356 Multiplayer 118 User Mods 1385 AARs (After Action Reports) Suggestions 4074
Previous dev diary Next dev diary
Show only dev responses
Hello everyone!

I know you are all eager to learn more about the Royal Court, but as we announced last week, we will go into more details once the Azure patch is released. If everything goes according to plan, and there are no unexpected events, we aim to release Azure next week! But let’s focus on today's small dev diary for now!

During the development of Crusader Kings III, we organized a community challenge where you could unlock unique cosmetics for the game, which we dubbed the Monarch’s Journey. With the 1.4.0 Azure patch, we’ve decided to make these cosmetics available for everyone!

It includes:
In order to celebrate this, we’ve also hooked some of these assets in to be used by random characters. For instance, Scots will be able to randomly use the Mullet haircut, while Frankish women will be able to use the Jeanne d’Arc haircut. 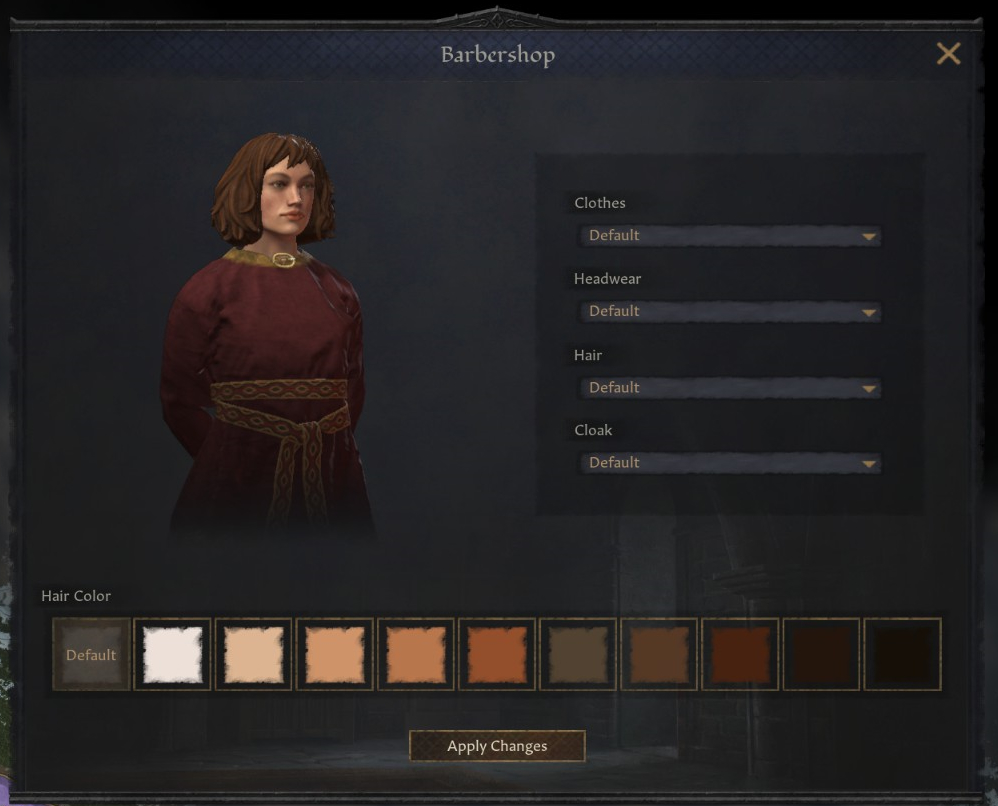 [A classy French woman with a Jeanne d’Arc haircut] [A charming Scot with a Mullet]​
And because fashion changed over time, the Chaperon and Hennin will be available in the western world only after 1300. 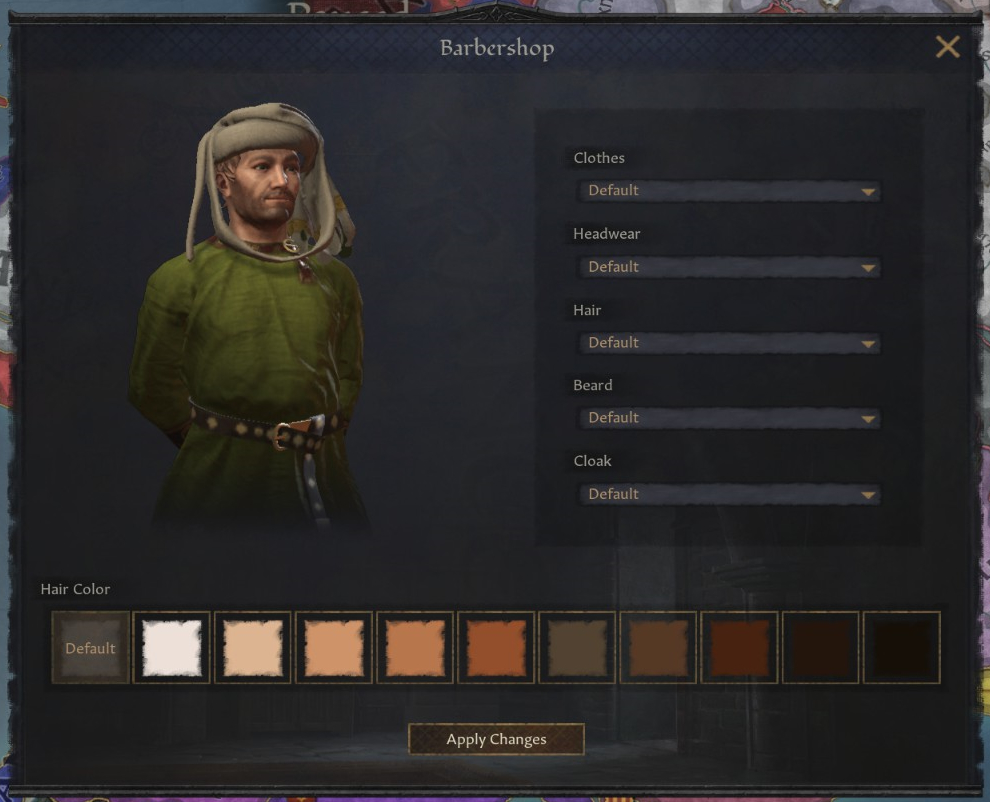 [A magnificent Hennin]​
In addition to that, we fixed several visual bugs highlighted by you:


On the AI side, we reworked how vassals handle holy war and added constraints on Feudal and Clans rulers to limit their aggression of Tribal rulers. These modifications still allow the Byzantine empire to expand but in a more elegant way. Let’s have a look at a few results from Observe mode! 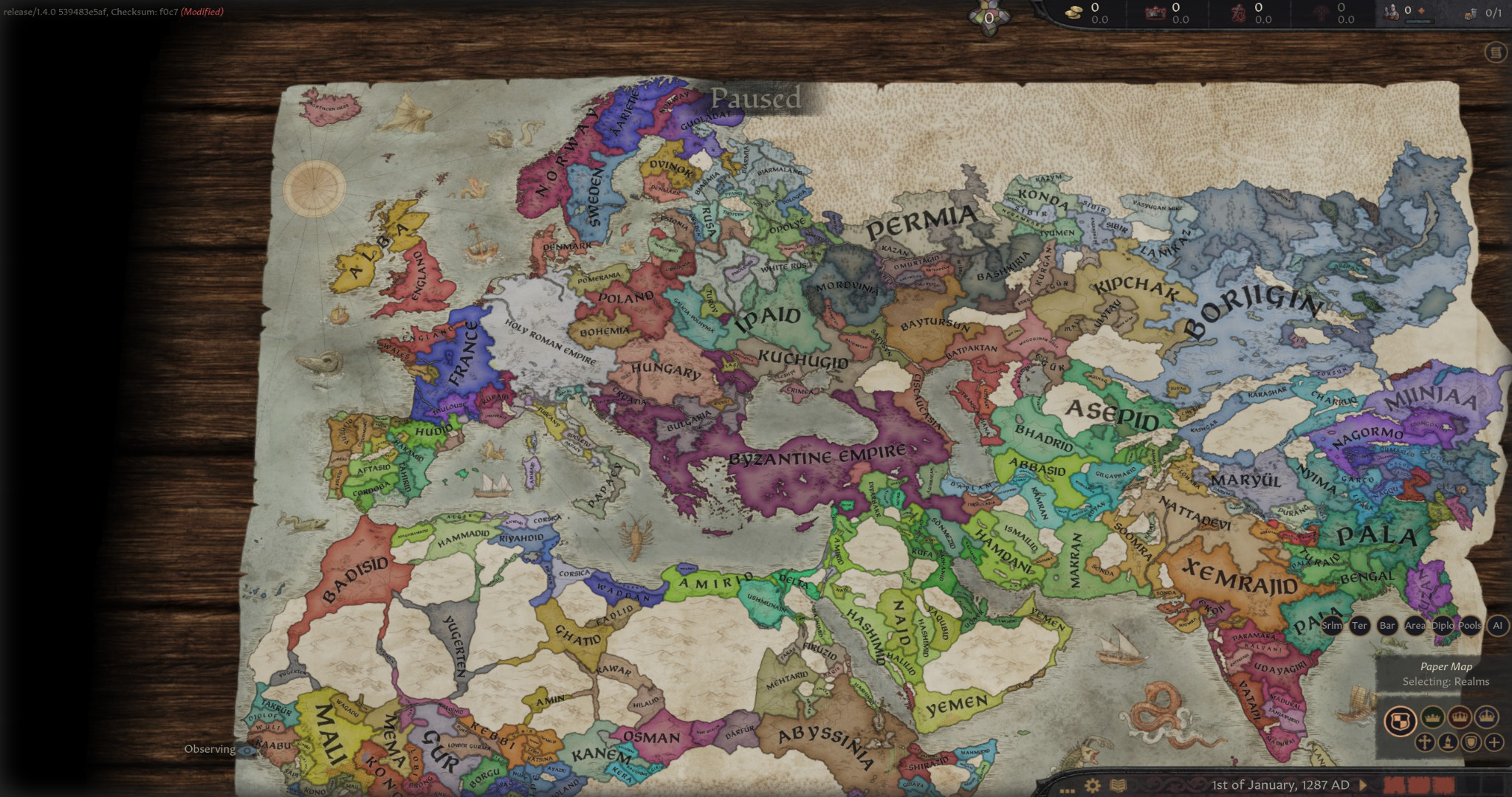 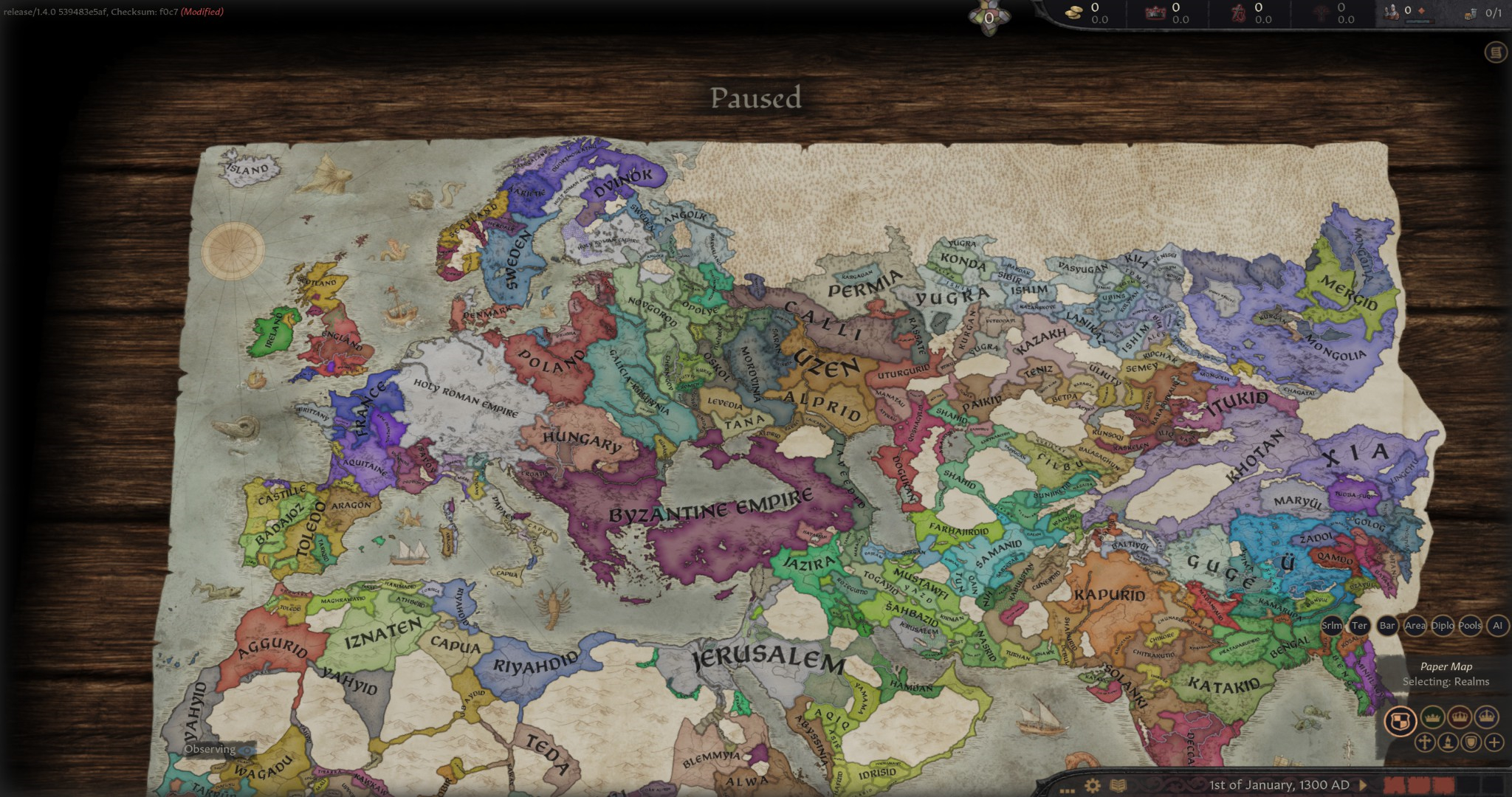 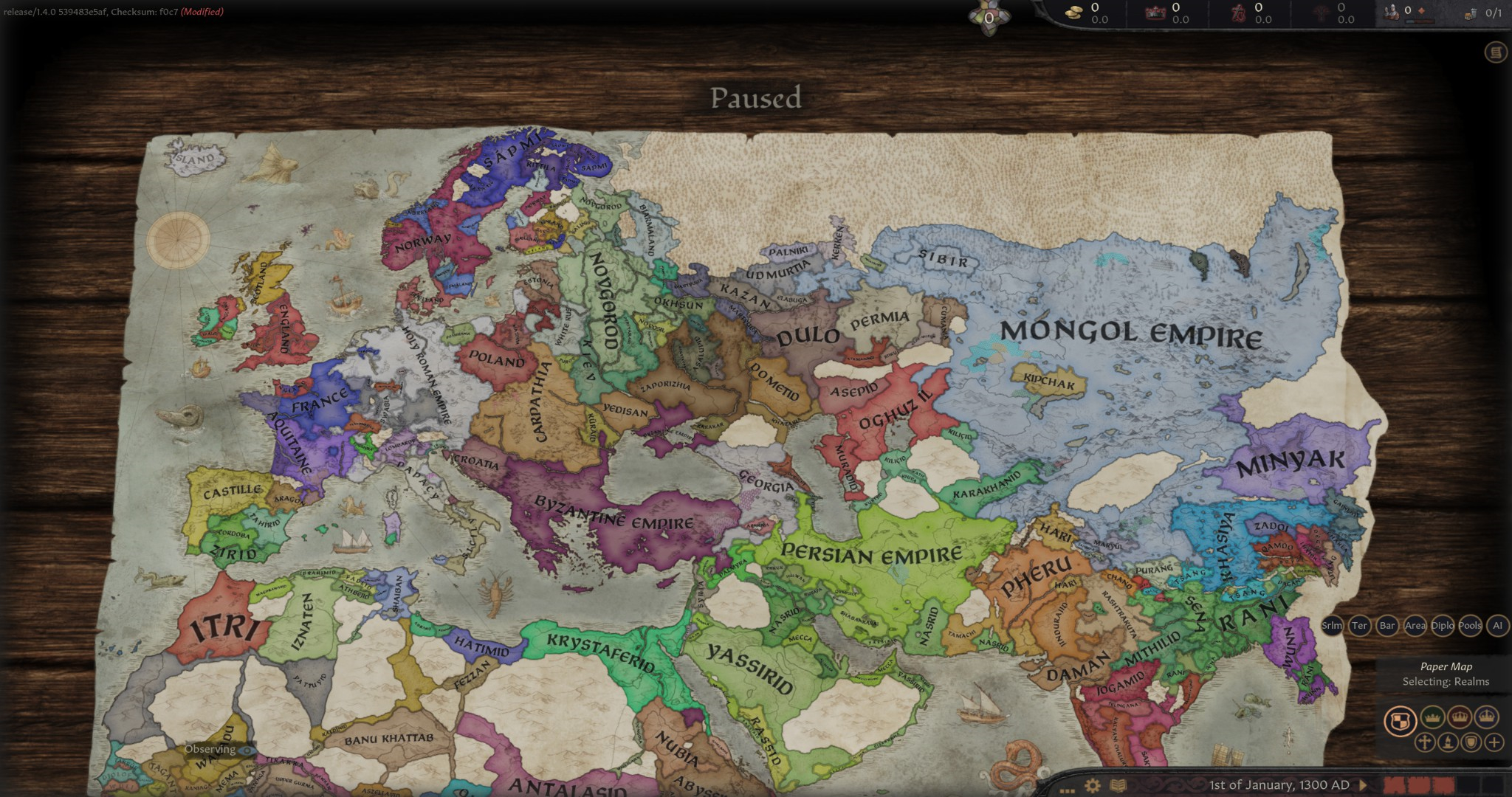 ​
And this is it for today! As mentioned at the beginning of this dev diary, we should be back next week with the changelog for the patch if everything goes well!

Until then, I wish you the best and, hopefully, have fun!

Pdx_Meedoc said:
These modifications still allow the Byzantine empire to expand but in a more elegant way.
Click to expand...

Disgusting. I worked hard to get those Monarch Journey points. And now the lazy casuals get them too? Feel betrayed. Never buying a Paradox game again etc.

Just when I thought it will implement MJs in CK3...
Reactions:

Thank god the monarch cosmetics are actually used in the game now. I had fun with unlocking them but felt cheap when they wouldn't appear naturally in-game. Looking forward to the patch. Hopefully the faction tweaks makes the midgame and lategame more challenging!
Reactions:

Glad to see my apathy with doing Monarch's Journey finally pay off.
Reactions:

The AI-Expansion adjustment is really nice. Thanks for reacting to our complaints about that!
Reactions:

We reworked how vassals handle holy war and added constraints on Feudal and Clans rulers to limit their aggression of Tribal rulers.
Click to expand...

Can you expand on this ? What sort of constraints did you add ?

Will this result in feudal/clan vassals being less likely to expand into the steppes ?
Reactions:

Pdx_Meedoc said:
we aim to release Azure next week!
Click to expand...

Good decision to unluck them for everyone and adding some time appropriate triggers for the later gear. Well done.

But it would be good if the Henin and Chaperon would follow the same colour pattern of the other western clothing. That base colour is too basic.
Reactions:

Cool. Which types of Characters will automatically use Chaperons and Hennins? I hope they are not restricted to unlanded Characters and the High Nobility (Princes and Pricesses, Dukes) of Western Europe wear them.
Toggle signature
The Kingdom of Navarra and Medieval Basques did not practice Cognatic Succession

you're killing us...
killed by suspense, not the i'd like to be killed...
Reactions:

Pdx_Meedoc said:
On the AI side, we reworked how vassals handle holy war and added constraints on Feudal and Clans rulers to limit their aggression of Tribal rulers.
Click to expand...

Can you tell us anything about exactly what the reworks are?
Reactions:

Pdx_Meedoc said:
Let’s have a look at a few results from Observe mode!
Click to expand...

Western and central Europe certainly seems a lot more stable than what I've seen in my games. The HRE surviving more or less intact is nice.
Last edited: Jun 1, 2021
Reactions:

not as interesting as notification settings manager from CK2 thought,
but interesting nonetheless.
Toggle signature
Simple and genius mod for EU4
https://steamcommunity.com/sharedfiles/filedetails/?id=1409824934
Reactions:

Should of showed a before example. It's less gory I guess. Need strong nomads to be the scary counter balance to the "civilized" kingdoms.
Reactions:

Appreciate this thanks; not had many opportunities to see proper combined holy wars as there's been no pope in either of my longer playthroughs, but looking forward to my next chance now!