Jump to latest Follow Reply
Menu
Install the app
You are using an out of date browser. It may not display this or other websites correctly.
You should upgrade or use an alternative browser.
Crusader Kings III 11712 MP Open Beta Feedback 21 Bug Report 7052 Tech Support 859 Multiplayer 93 User Mods 1063 After Action Reports (AAR) 158 Suggestions 2957
Previous dev diary Next dev diary
Show only dev responses 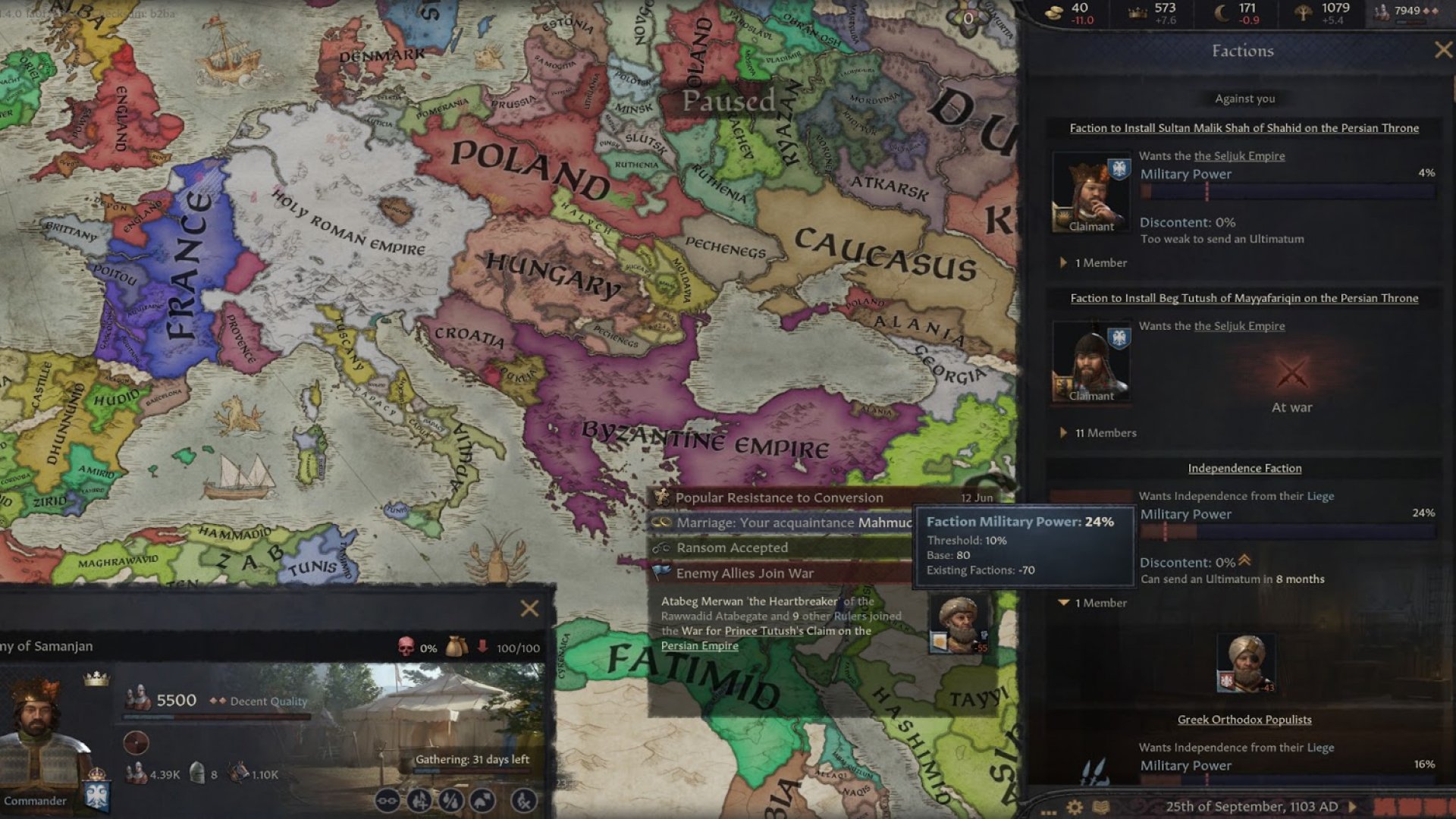 I’m back with more info about what’s coming in the 1.4 Azure patch! Today we are going to cover improvements around Warfare. We prepared a few more things in addition to the starting Men-at-Arms. I hope you will find them interesting!

In addition to the Quality of Life improvements we presented last week, we also revisited the war declaration interface. [Image of the new Declare War window]​
As you can see, the information has been restructured and it should be easier now to:

When it comes to Mercenaries, we adjusted how their cost is calculated. The price of a company is now affected by a few parameters:

The dynamic price will make it easier for lower tier realms to rely on Mercenaries and fight back their bigger neighbours. And it will be harder for extremely rich emperors to deny access to mercenaries by hiring all of them for a small sum. After all, why would the Count of Ulster be expected to pay the same price as the Emperor of the Holy Roman Empire - if you're a mercenary captain and you see that your client clearly is rich, you might just increase your prices...

Your upcoming war will have a quite different pace. From now on, the garrison will be depleted at the end of a successful siege. It means that a freshly captured territory will be defenseless for a while, making recapturing it faster. After a siege, the garrison will recover over months or years, and the speed can be increased by improving the Holdings.

It will thus be easier to counter-attack and recover territories you lost recently, or to continue a war which was invalidated if you have another valid casus belli. This change will encourage you to defend your wargoals and the strategic territory with your armies.

In order to make your life harder when you start conquering the world, we tweaked the logic behind the creation of factions, and they should be more threatening now.

One of the big changes is their ability to synchronise their declaration. The power they need before pushing their demand is now dynamic and reacts to the state of the other factions. If a faction is threatening you, or is already at war with a ruler, it will be easier for another faction to push their demands. It should create more challenging situations, and you might want to concede to some factions to avoid struggling with too many opponents. [Image: The faction is not strong enough to push their demands despite a lowered threshold due to existing factions] [Image: After one of the other factions declared war, the faction is now strong enough and will push their demand while their ruler is fighting the others.]​
In addition to that, characters will be more inclined to join an Independence Faction if they own enough territories outside of the de jure area of the primary title of their Liege. Again, fast conquest will be more challenging, and consolidating your Realm will be more important.

And that’s it for today’s Dev Diary! But, before leaving you, a quick reminder: The PDX Con will be held this week-end! You can join us on our dedicated Discord Server! There will be a lot of nice streams and announcements; stay tuned for some news about Crusader Kings III !

Have a nice week, and see you soon!
Reactions:
Written by

Looking good! I especially like the change to factions.
Reactions:

Pdx_Meedoc said:
Your upcoming war will have a quite different pace. From now on, the garrison will be depleted at the end of a successful siege.
Click to expand...

Wait, it wasn't doing this already?! That explains a lot actually...

(I had just assumed the refill rate was too fast.)
Reactions:

I like how the dev team is focusing on core mechanics of the game. Thank you for the steady improvements.
Toggle signature
I play Crusader Kings 3, Kaiserreich and TNO o/
Reactions:

Some very nice changes here, looking forward to the patch!
Toggle signature
Fan of the Week: 17/06/2019

Any change that makes conquering the world more difficult is more than welcome.

The medieval period was not the time of WC. Holding a large kingdom or empire should be a challenge, not fun
Reactions:

All of these sound like good changes that move the game in the right direction.
Reactions:

I'm fine with creating more challenging factions for the players, but I wish AI learned how to deal with them better. Even now in some observer games I watch as realms keep getting factions over and over that have like 70-80% of the liege all the time and the ruler's only chance if the AI goes for white peace for no good reason (saw too many external wars end like that as well)
Reactions:

Looks amazing! Especially the mercenary and factions changes. No more Byzantium taking every mercenary in existence all the time. And hopefully more independence rebellions.

I hate the purple blob with a fierce passion.
Reactions:

Pdx_Meedoc said:
It will thus be easier to counter-attack and recover territories you lost recently
Click to expand...

Would be nice if we could refill garrison from our armies, so it's not all constant flip-flopping. Maybe unlock it with a martial perk? (I assume it's too late to for this patch)
Good mechanic, in general.
Toggle signature
My mods: Fullscreen Barbershop for CK3, Better UI for Imperator, Elegant Galaxy for Stellaris
Reactions:

merulaalba said:
Any change that makes conquering the world more difficult is more than welcome.

The medieval period was not the time of WC. Holding a large kingdom or empire should be a challenge, not fun
Click to expand...

While I agree that it should be more difficult, I find the idea that holing a large realm should not be fun completely absurd.
Reactions:

This is an A+ dev diary. Exactly the thing I like to see. More of this forever please.

I like how easily the devs are willing to tweak their UI for the better. Far fewer clicks needed in war declaration to see the information you need and set the objective. It would have been very easily for most developers to say 'meh, current is good enough' but these devs went the extra mile and show a understanding how how players play.

I don't use mercs much so don't have strong opinions about these but they do have a strong aspect of 'rich get richer' to them. I think CK2 leaned too heavily on 'scale costs of everything to your size', but in this particular case it makes a lot of sense.

Dynamic garrisons are how I assumed garrisons worked already. It'll be nice to quickly retake a castle when you attack the occupier merely days after the siege is lost, because it was frustrating to have to spend so long taking it when you barely missed it (and it makes sense that it would now stay vulnerable after your goof too).

Love love LOVE the faction changes. Factions are not nearly dangerous enough in current version. Finally the "Make Internal Stability Hard" faction of the forum is being listened to!
Reactions:

These seem like good faction changes that I think are needed, per the blobiness I'm seeing by players.

I do start to worry though how much this will turn every faction war into a multi-faction war. I know the variables will be different each time and we may use the other means like diplomacy or murder to get one or two factions to go away, but with this added factor I still wonder how many single faction wars if any we will have for now on.
Toggle signature
r/CrusaderKings Discord - Active daily, MP games, memes, history discussion.

merulaalba said:
The medieval period was not the time of WC. Holding a large kingdom or empire should be a challenge, not fun
Click to expand...

How about "Holding a large kingdom or empire should be a challenge & fun"?
Reactions:

EmeraldThanatos said:
While I agree that it should be more difficult, I find the idea that holing a large realm should not be fun completely absurd.
Click to expand...

I think he had awkward wording. The game should of course be fun, and the fun should come from being challenging.
Reactions: