Jump to latest Follow Reply
Menu
Install the app
You are using an out of date browser. It may not display this or other websites correctly.
You should upgrade or use an alternative browser.
Crusader Kings III 11715 MP Open Beta Feedback 21 Bug Report 7053 Tech Support 862 Multiplayer 93 User Mods 1063 After Action Reports (AAR) 158 Suggestions 2958
Previous dev diary Next dev diary
Show only dev responses
Greetings!

Patch 1.2 ‘Argent’ has been out for a while now, and we hope you’re enjoying it! It’s so much fun to see what fascinating creations you all create in the Ruler Designer!

To round off the year, we’re planning to release a small patch early next week. Originally we wanted to release it this week, but some more issues were found that we wanted to address - such is the nature of software development!

The patch will address a number of bugs and issues, listed below:


- You can now hold the Control-key when raising armies to not have them be split based on supply when you raise them
- Fixed the Ruler Designer crashing when using the arrow keys to move sliders on machines with limited RAM
- Fixed some characters not having access to Cultural Names when naming children because their Religion didn’t have any Religious names defined
- Fixed a crash that could happen when randomizing Dynasty Names for certain cultures in the Ruler Designer
- Fixed the Legacies button being hidden beyond the screen if both Dynasty and House modifiers are present
- Fixed the AI not always supporting the player correctly when handling massive armies
- Fixed not being able to build certain buildings when playing the game in spanish, esto ahora está arreglado
- Fixed siege sounds sometimes persisting after you close the siege window
- Removed the deprecated Nudity game rule, nudity is now toggled on/off in the settings menu, accessible in the same place as you toggle displaying graphical diseases
- The lifestyle/focus button is no longer visible on characters that cannot have a lifestyle set
- Kicking a player that is still inside the Ruler Designer will no longer block a multiplayer game from starting
- When you Ruler Design a character, you will no longer lose all non-De Jure vassals that ruler had
- Fixed not always having access to all hairstyles when Ruler Designing a character that is 18 years old or younger
- You now get less points from being extremely old when Ruler Designing a character
- Fixed the list of Faiths exceeding its limits when playing the game in a non-english language
- Criminal rulers no longer get a free pass on imprisoning without impunity
- Diplomacy perk modifiers are now added and subtracted properly (Sound Foundations and Friendly Counsel)
- Fixed losing Piety when imprisoning generic Criminals, now properly only applies when imprisoning your Head of Faith
- Fixed an issue with floating or sinking infant characters in the main menu, exorcism successful
- Fixed a memory leak in the GUI editor
- Fixed a memory leak for character portraits. This could have a significant effect in the Ruler Designer, and a lesser one during normal play
- Fixed achievements sometimes being shown as unavailable even though they were available
That's all for now! Have a great winter!
Click to expand...

Subcomandante said:
So no fix for the hook manufacture=perceived murder. Sad!
Click to expand...

Furthermore, I propose that message settings must be restored.

Creating the Tsardom of Russia
S

Thanks for improving a major bug with the Spanish localization. Only today did my roommate and I realize the Intrigue tab’s conspiracies are supposed to show actual numbers/stats, as they simply don’t show up in Spanish. So I’m glad to see that locale fixes aren’t outside the scope of hotfix releases.

Aside, I wish there was a good way to contribute to the localizations. I’ve been fixing the yaml files myself as I play but there doesn’t seem to be any good handoff from technical volunteer to developer.

Edit: I see that CK3 has a way to override built-in localization rules without touching the game files (https://ck3.paradoxwikis.com/index.php?title=Modding). I have a few dozen changes made to the game's Spanish locale files. I'm going to move my changes to the mentioned "replace" folder. It's a good enough middle ground. Edit2: Is there another folder I can put my "replace" folder that will still allow achievements?
Last edited: Dec 5, 2020
Reactions:

Does the intimidation perk bug difficult to fix? I think the 'Forever Infamous' perk bugged the Dread monthly changes. 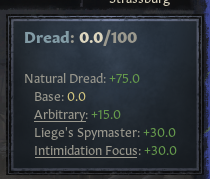 I reported the bug and the dev already acknowledged it.
I hope this will be fixed next hotfix, even though I don't see it on the notes above. I hope it's one of the 'more issues' that you guys wanted to address.
Last edited: Dec 4, 2020
Reactions:

rageair said:
- You now get less points from being extremely old when Ruler Designing a character
Click to expand...

Thank you PDX the game is perfect now! You can’t believe how happy I was you fixed the border highlight issue, and how happy I am you’re going to fix the siege sound issue
V

some mods that only change aesthetics (i have a potato computer, so some performance mods are very helpful) stuff are not achievement-compatible. Are you planning on changing that on a future update?
Reactions:

Will you developers add the "Parsig" culture from CK2's HIP mod?
P

Thank you for the fixes!!
R

Really glad to see the first line of the patch notes and really appreciate your work!
I

Great work, keep it up! I just have one question, have you considered a spouse designer?
Reactions:

May you consider adding another key combo where it would raise the MAA in the target county (and do not add more levies to it), and the levies in the surrounding counties?

I personally love the new function when raising levies to mass siege when my MAAs are already up and killing things, so I don't have to manually split a death stack into multiple siege stacks.
G

rageair said:
- You can now hold the Control-key when raising armies to not have them be split based on supply when you raise them
Click to expand...

Greetings. Please make an option to raise armys like it was before. It now takes forever to raise 30-40 armys on point!

I dont play the game anymore after the last patch because of this change.
Reactions:

Gutser CKIII said:
Greetings. Please make an option to raise armys like it was before. It now takes forever to raise 30-40 armys on point!

I dont play the game anymore after the last patch because of this change.
Click to expand...

That's... literally what you are quoting. Holding control will make it function as it did before the 1.2 patch
Toggle signature
When you see someone's post appear like this, they are acting as a moderator.
Never quote or otherwise publicly respond to moderator posts. If you have a problem: PM a moderator
Forum Rules
Reactions:
G

Would recommend having at some point the ability when creating a custom religion (or a modded one) a line that defines what faith's naming conventions to use. Example being when in custom religion designer, an option to choose which faith's naming conventions to have available to it, either of the same religious group (or maybe ones its syncretic with as well) could be placed in the section with a simple button under the "Description" of the faith for "Religious names" where they are enabled/disabled similar to how tenants work (if its of the same religious group its automatically selectable, if its syncretic it is enabled as well).

This could simplify and allow for religious names to be more easily chosen from and add a bit to the benefit of the custom religion mechanic that shouldn't be too difficult to add.
Reactions:
G

pevergreen said:
That's... literally what you are quoting. Holding control will make it function as it did before the 1.2 patch
Click to expand...

Option on/off would be better anyway.
Click to expand...

There are legitimate reasons to use both options in the same playthrough. A checkbox in the rally point interface itself might be slightly more convenient than modifier-click, but in the end it's all much of a muchness.
Toggle signature
Before you accuse Paradox of selling out with the design of Vicky 3, go listen to track 7 on Tool's Ænima, then reflect.
If you don't want politics in your games, play Tetris.
Ceterum censeo Featured Content banner delenda est.
Reactions:

Tiax said:
Kinda wish it was hold control to raise split, rather than the other way around, but hopefully it'll just get completely reworked in the next full patch anyway. The raise split behavior seems very rarely desirable, and I'll forget to hold control some significant portion of the time.
Click to expand...

Agreed, but I'm not going to complain. I wasn't expecting any changes to avoid the splitting armies feature (considering it is meant to be a feature) anytime even remotely soon. I'm very happy that they listened to all of us who were not happy with that feature. Holding CTRL may be a bit of a pain, but at least it's there as an option now, which is much more than I expected.
Reactions:
Show hidden low quality content
You must log in or register to reply here.
Share:
Facebook Twitter Reddit Tumblr WhatsApp Share Link
Top Bottom