Menu
Install the app
You are using an out of date browser. It may not display this or other websites correctly.
You should upgrade or use an alternative browser.
Crusader Kings III 11126 MP Open Beta Feedback 19 Bug Report 6752 Tech Support 782 Multiplayer 82 User Mods 983 After Action Reports (AAR) 144 Suggestions 2681
Previous Dev Diary Next Dev Diary
Show only dev responses 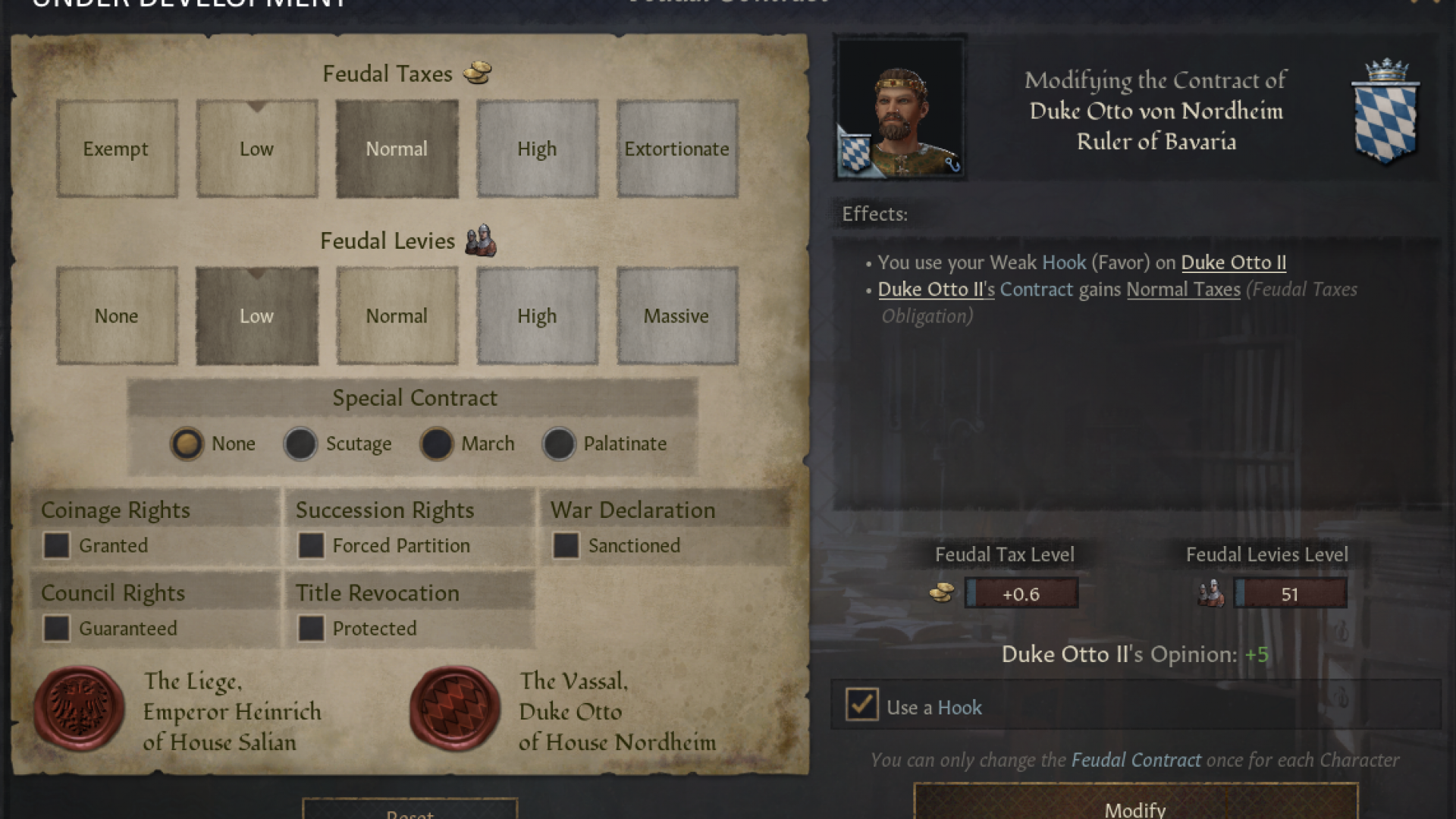 Hello everyone and welcome to the 33rd CK3 Dev Diary!

I’m Matthew, one of the Programmers on the CK3 team, and today I am going to talk to you about the overhaul we’ve done to Feudal Contracts since Dev Diary 17.

A quick refresher on what Contracts are: every vassal above baron tier has an individual contract between them and their liege which affects how much the vassal gives to the liege in terms of tax and levies in exchange for the liege’s protection. In the case of Feudal vassals, this contract can be renegotiated.

We were not fully content with the initial implementation of this setup as it did not help facilitate the drama and storytelling of the deals made between a vassal and their liege and the disagreements that could arise from that. This was a view shared among the community as well which reinforced our desire to give this feature another look, so a couple of our designers and I gave it an overhaul.

The Contract
You may have seen screenshots or videos of this system in some of the media released from our press events but I’m gonna take you through the new system step by step, so without further ado here is the new interface you’ll see when you interact with a vassal’s feudal contract. 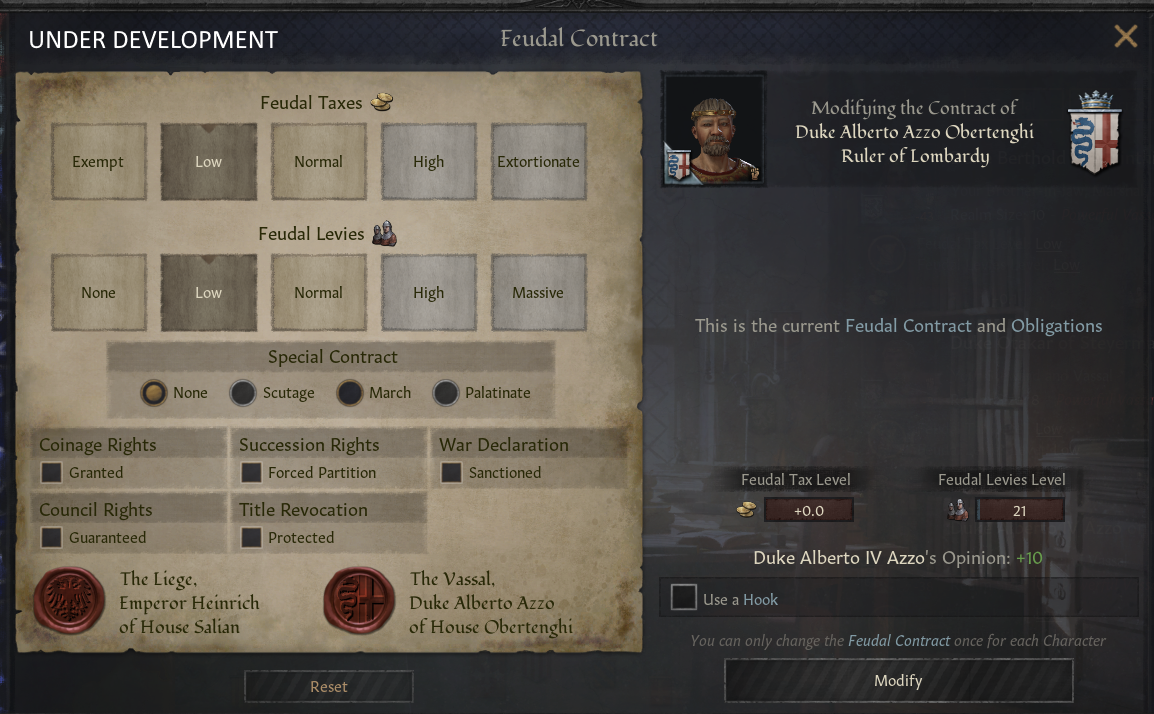 As you can see there are a lot more options now to tailor the contract.

Going from top to bottom you can see that we have split the base tax and levy obligations into two separate tracks each now with five options. These are the core base of how much taxes and levies are given to the liege, the lower they are the more your vassal will like you, of course, and the higher they are the less content they will be.
When negotiating a new deal you can only move to adjacent levels of the tax and levy obligations.

Below that we have what we call the “Fine Print” options. These fine options are unlocked via various innovations and provide various modifications to the contract.
The first row being the Special Contract options of Scutage, March, and Palatinate which are available for vassals that are Dukes or Kings. 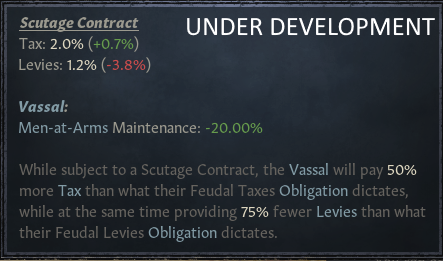 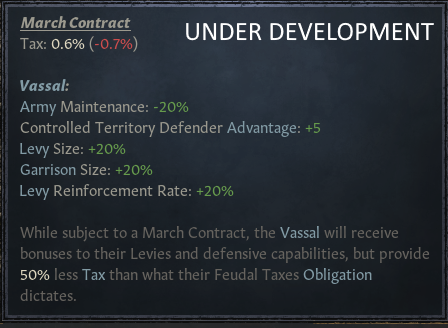 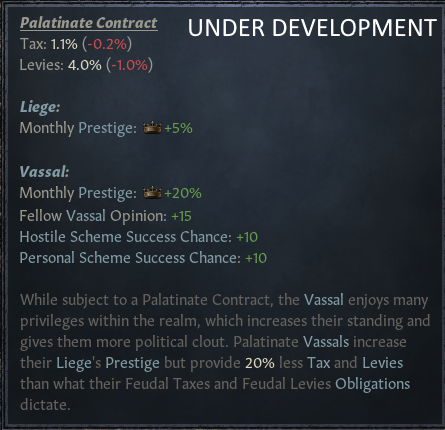 At the bottom we have the rest of the Fine Print options available, these are things like guaranteeing your vassal a spot on the council or granting them coinage rights. Some options are only shown if the vassal meets specific conditions, for example if the vassal is of a different faith to the liege. In such a case the “Religious Protection” gives them special rights to practice their faith without risk of the liege demanding their conversion or converting the faith of their provinces.

The Negotiation
When negotiating the contract a max of three changes may be made. We experimented with different values and this felt like it wasn’t too limiting whilst also letting you too wildly change your contract in one go.

With the new obligations that can be changed and enacted this allows you to negotiate a more interesting deal. For example, you as the liege may want to increase the amount of taxes your vassal gives you, but just doing that alone will be viewed as unfair by the vassal and increase your tyranny. 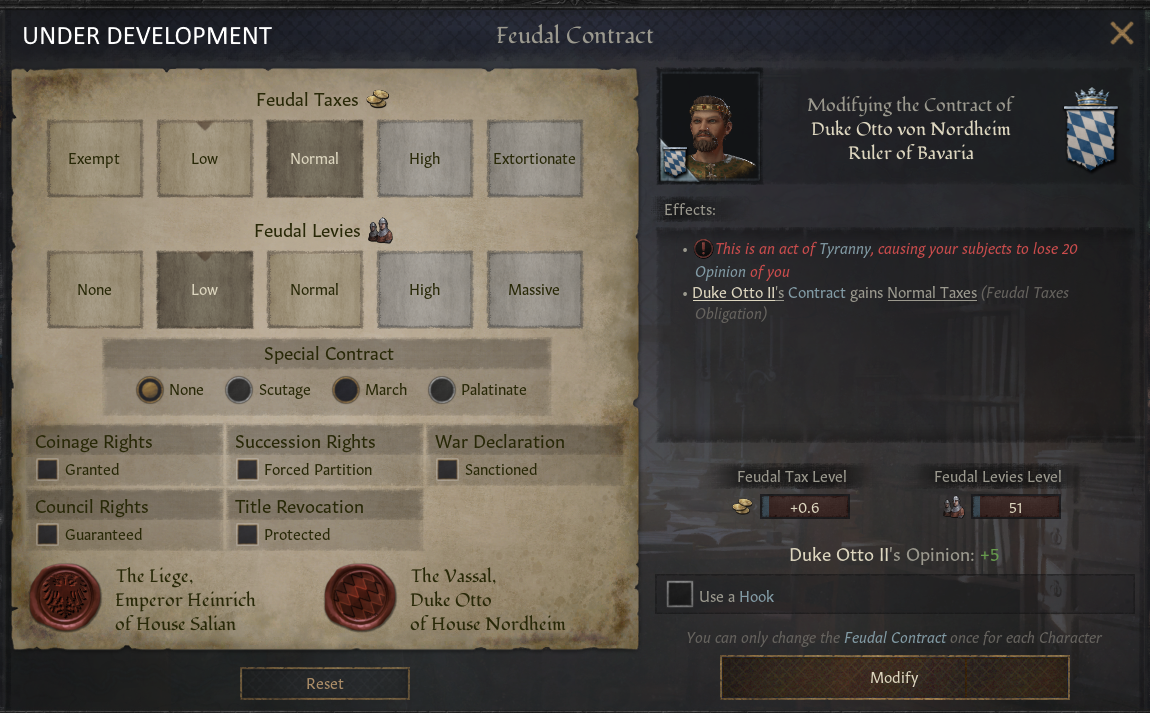 So if you don’t want to take that tyranny hit then you need to look at what changes you can propose that the vassal will want, so in exchange for these increased taxes you could guarantee your vassal a spot on the council meaning you can now enact this deal without being viewed as a tyrant. 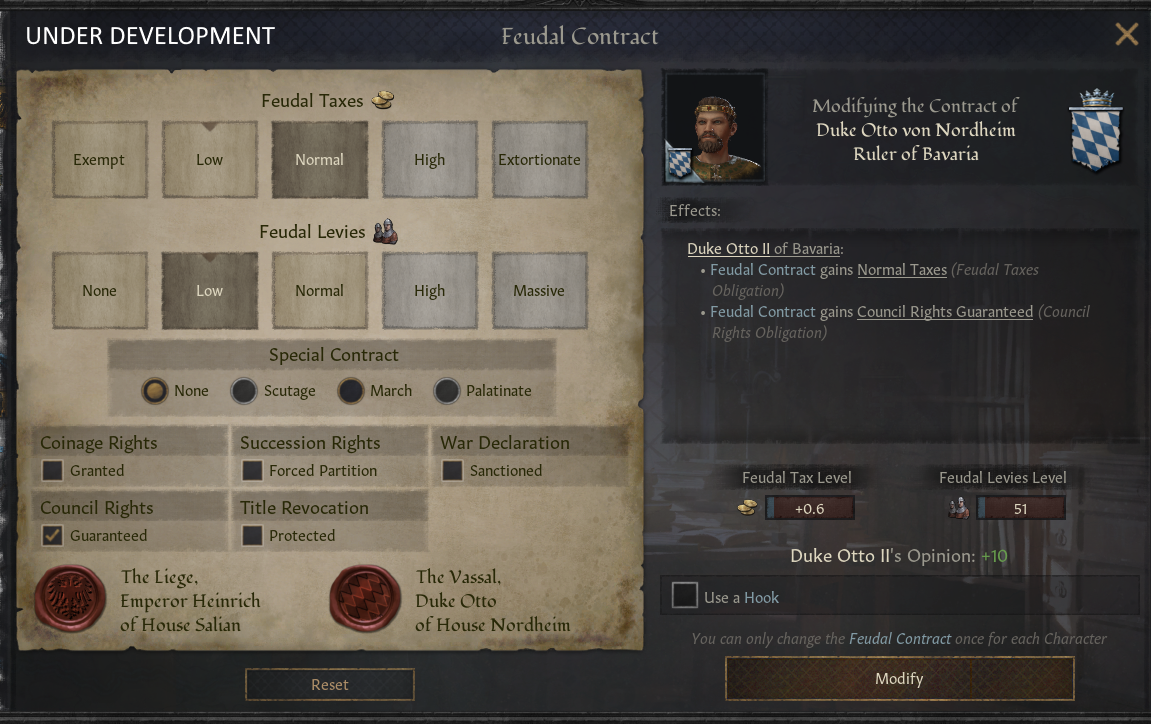 [a contract proposal with a fair trade]

Alternatively, if you have a hook on your vassal then you can use that hook to count as one free change in favour of the vassal, so you can use your hook and get those higher taxes without having to give any other concessions and not be viewed as a tyrant. Blackmailing people is surprisingly effective. 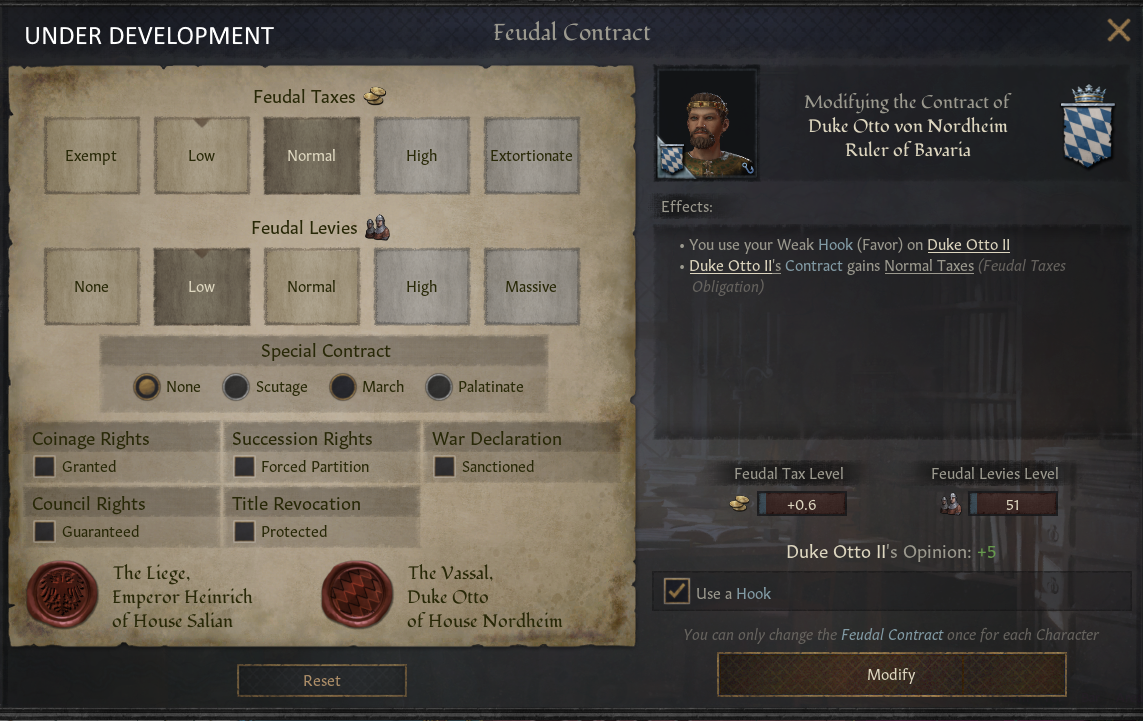 [a contract proposal using a hook to avoid tyranny]

It is worth mentioning that even if you propose a “fair” trade that does not give you tyranny this does not mean that the vassal will be perfectly content. There is an opinion change tied to each obligation and what status it is in, vassals will tend to dislike paying more and like paying less, and this opinion modifier will be present in the vassal’s view of their liege.

The vassal themselves can of course also negotiate the contract, they have the added restriction that they must offer their liege an even trade. So they cannot ask to pay lower taxes without using either a hook or agreeing to give the liege something they would want, be that giving more levies, agreeing to stay with only partition succession, or giving up a benefit they have previously been given such as that guaranteed council spot.

Some vassals start with contracts different to the default, in the Holy Roman Empire all vassals start with low taxes and levies to represent the internal state and the lower amount of control the Emperor was exerting over their vassals at the time.

We really wanted the interface to make this feel like an actual paper contract being signed between the liege and the vassal, thankfully we had this beautiful parchment background and wax seal shader lying around that helped spice it up.

Modding Contracts
All of these different obligations, their effects, how the AI uses them, and how they are shown in the UI is controlled in the script files so you can mod in or change existing obligations to your heart’s content.


Code:
Here we have the script database entry for the religious protection obligation type, it demonstrates the various options and should be fairly self explanatory in its naming of the options.

I hope you’ve all enjoyed this dev diary and are excited for the new Feudal Contracts and the more options and interactions they can provide between vassals and lieges!

We look forward to seeing you next week, in the meanwhile if you want to chat more then I highly recommend joining our CK Discord Server as well!

Pets of the Dev Team
On the Crusader Kings 3 team we are of course very big fans of animals and pets of all kinds. So I thought to cap off this dev diary, and give you all some much needed cuteness overload during these difficult times in the world, I'd collect a bunch of pictures of all our wonderful pets, fluffy or otherwise! 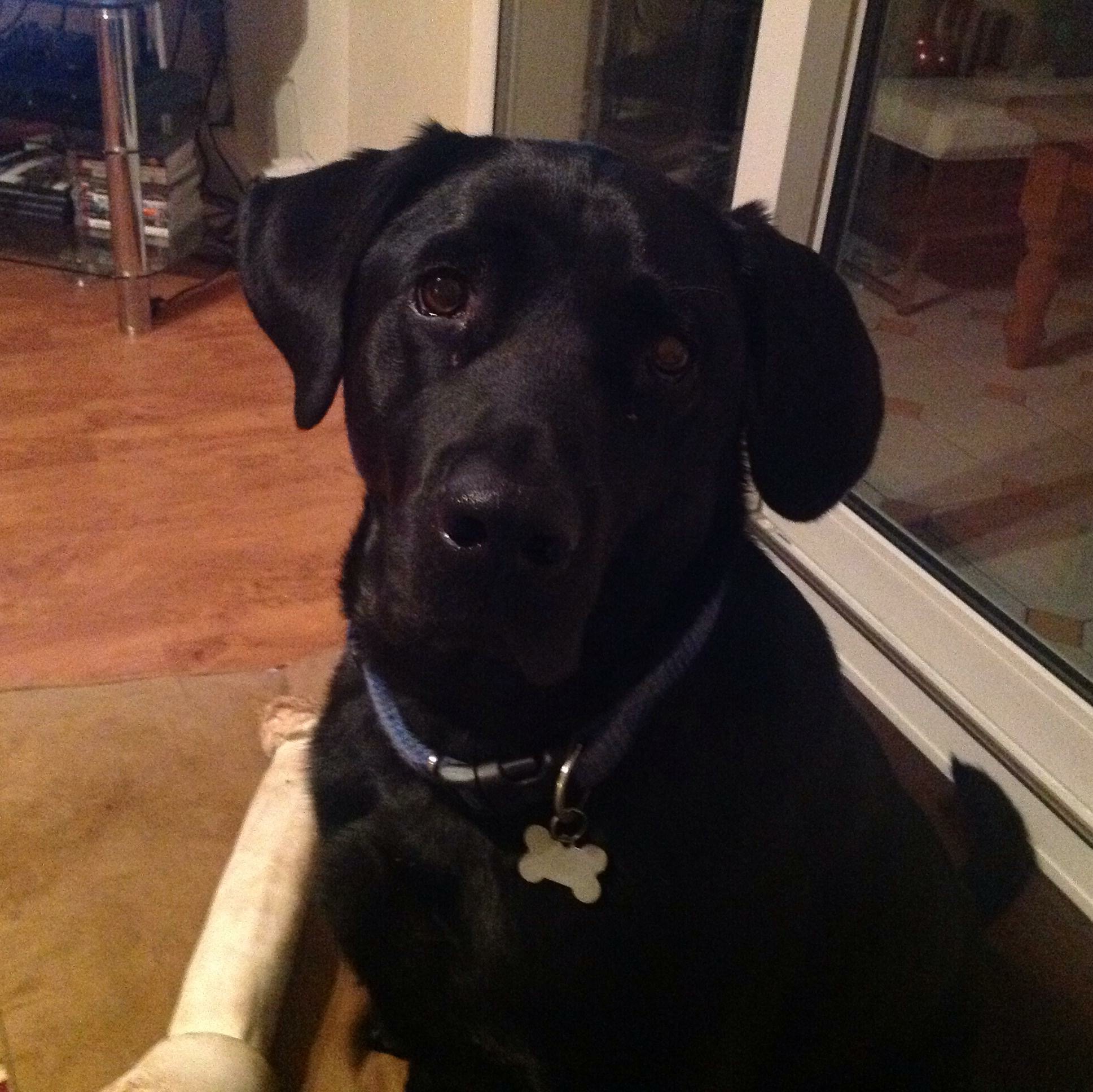 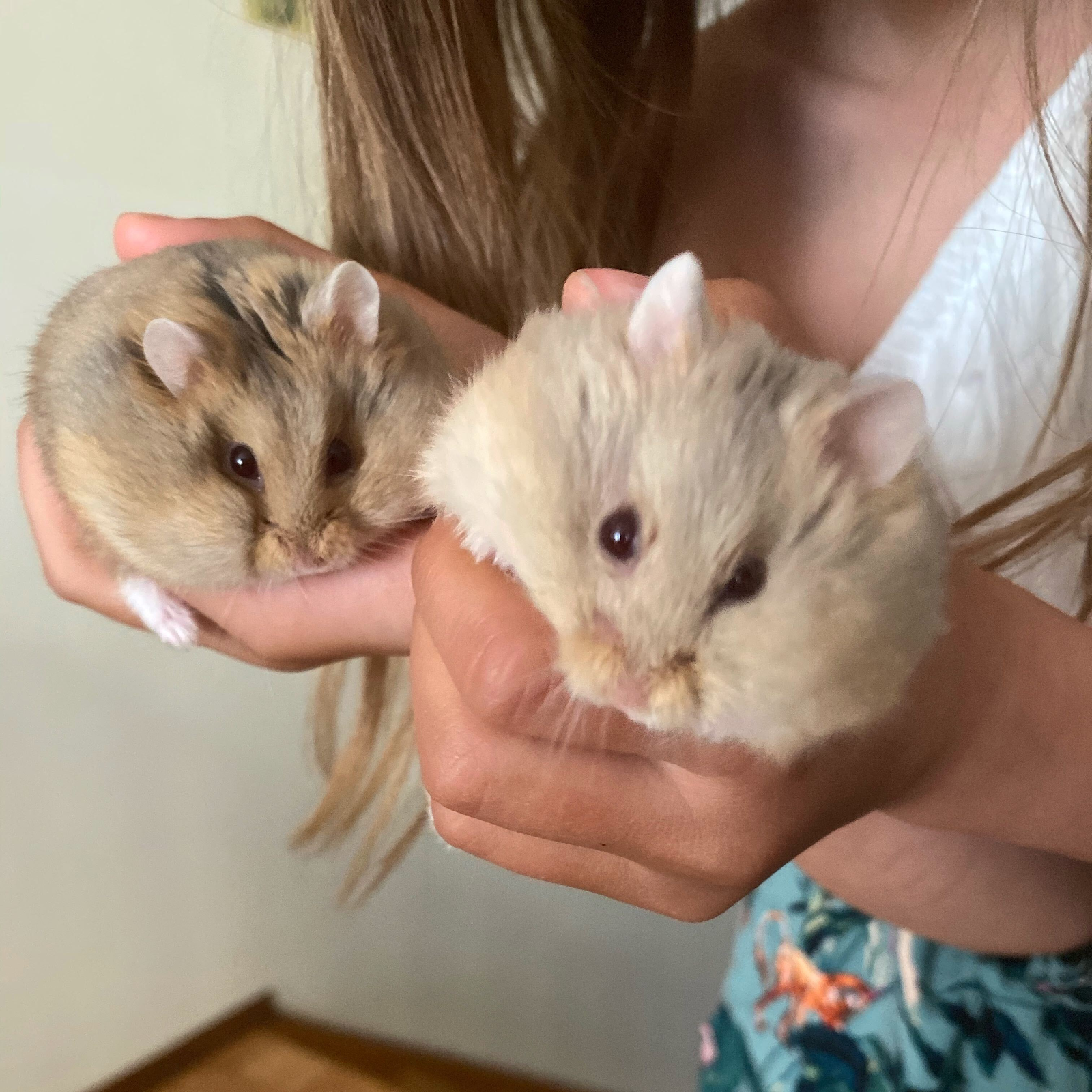 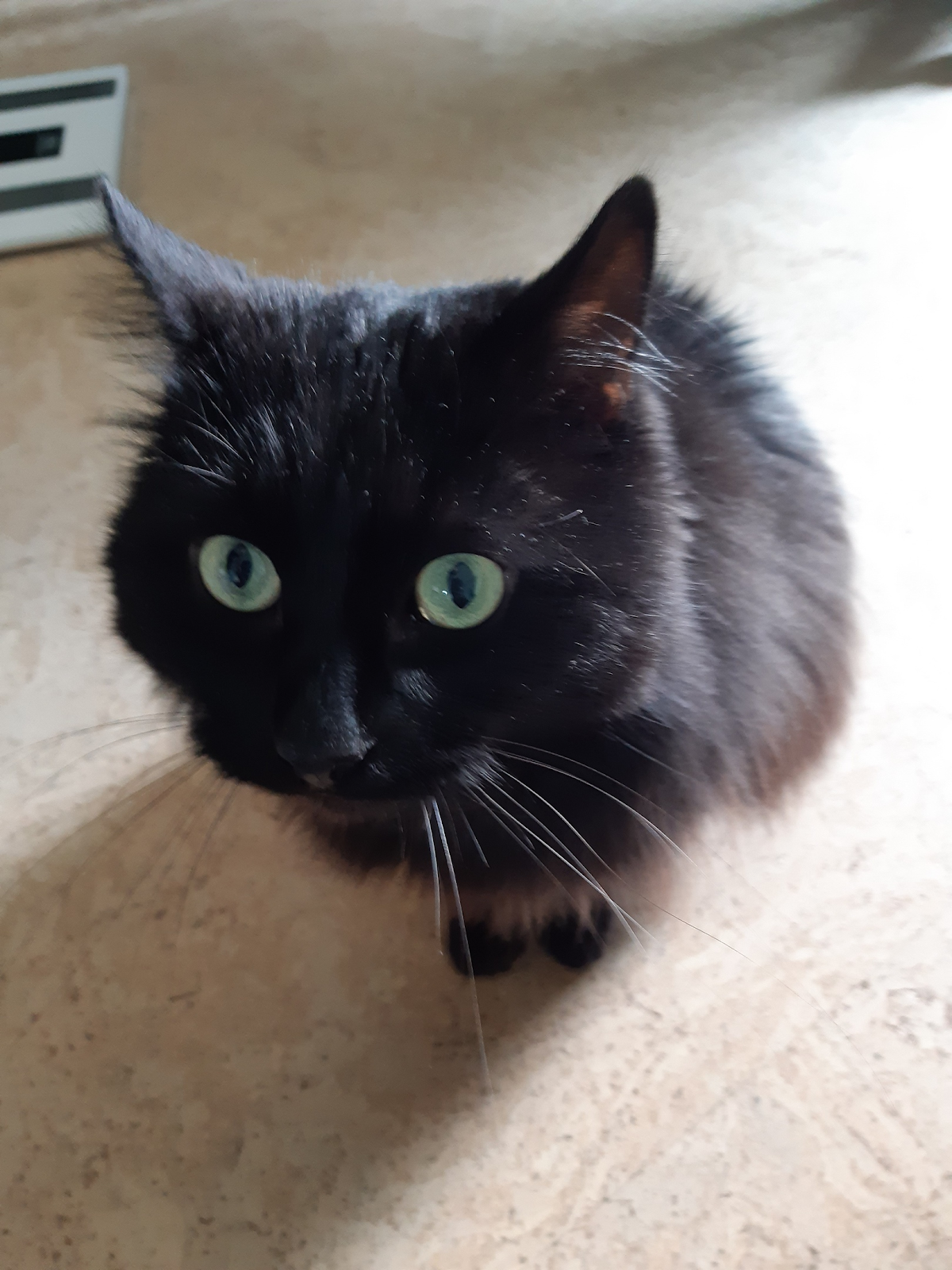 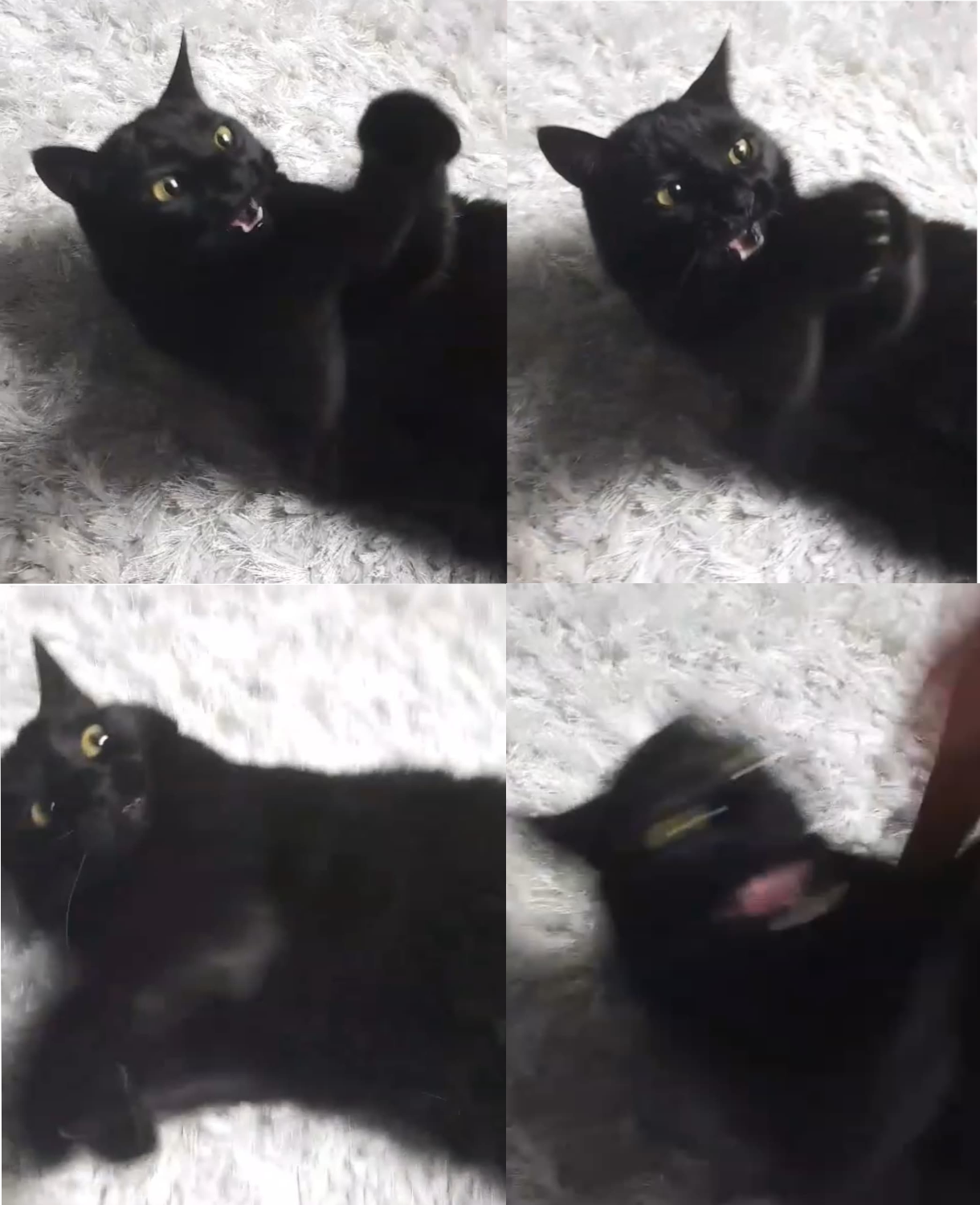 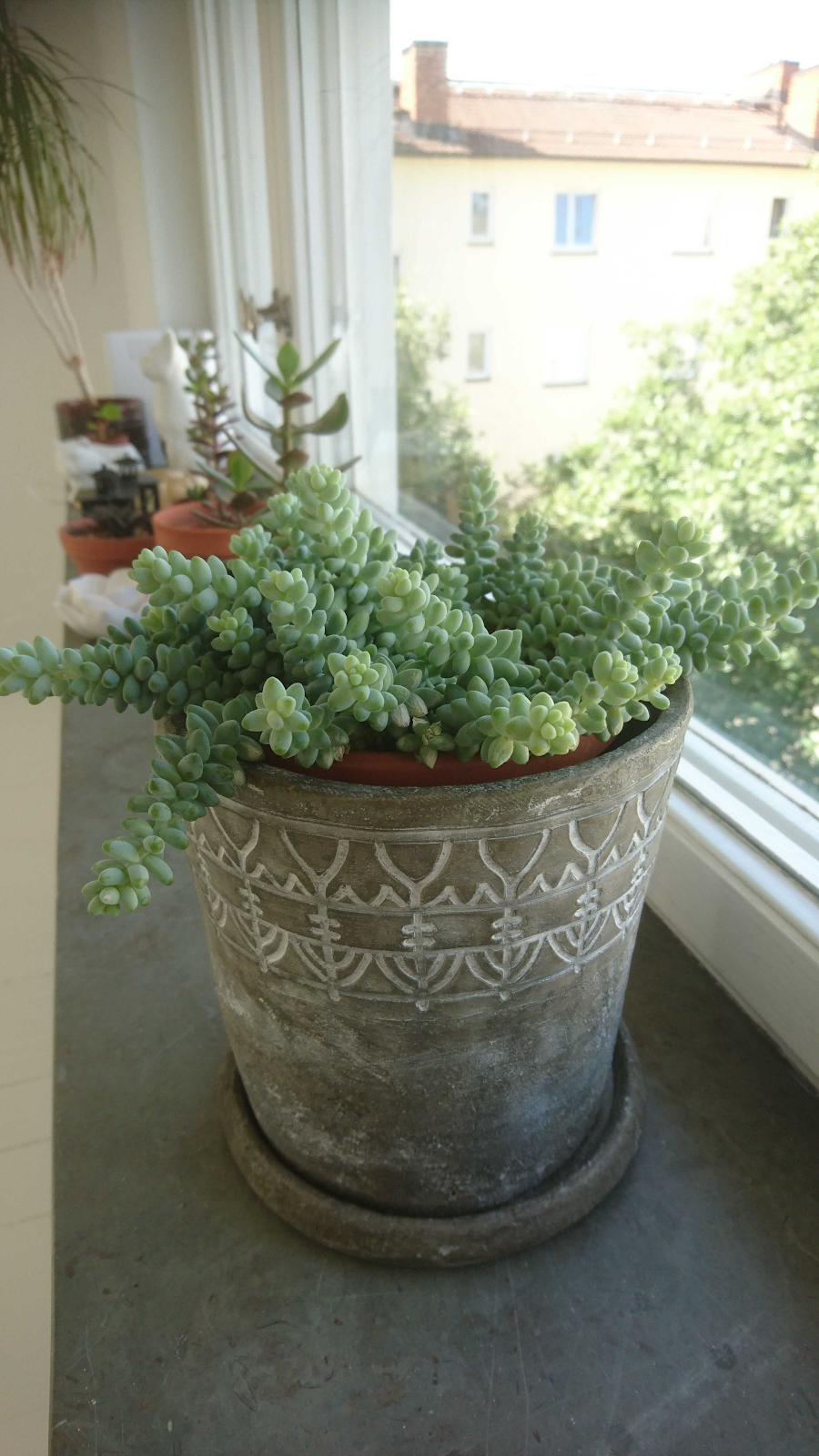 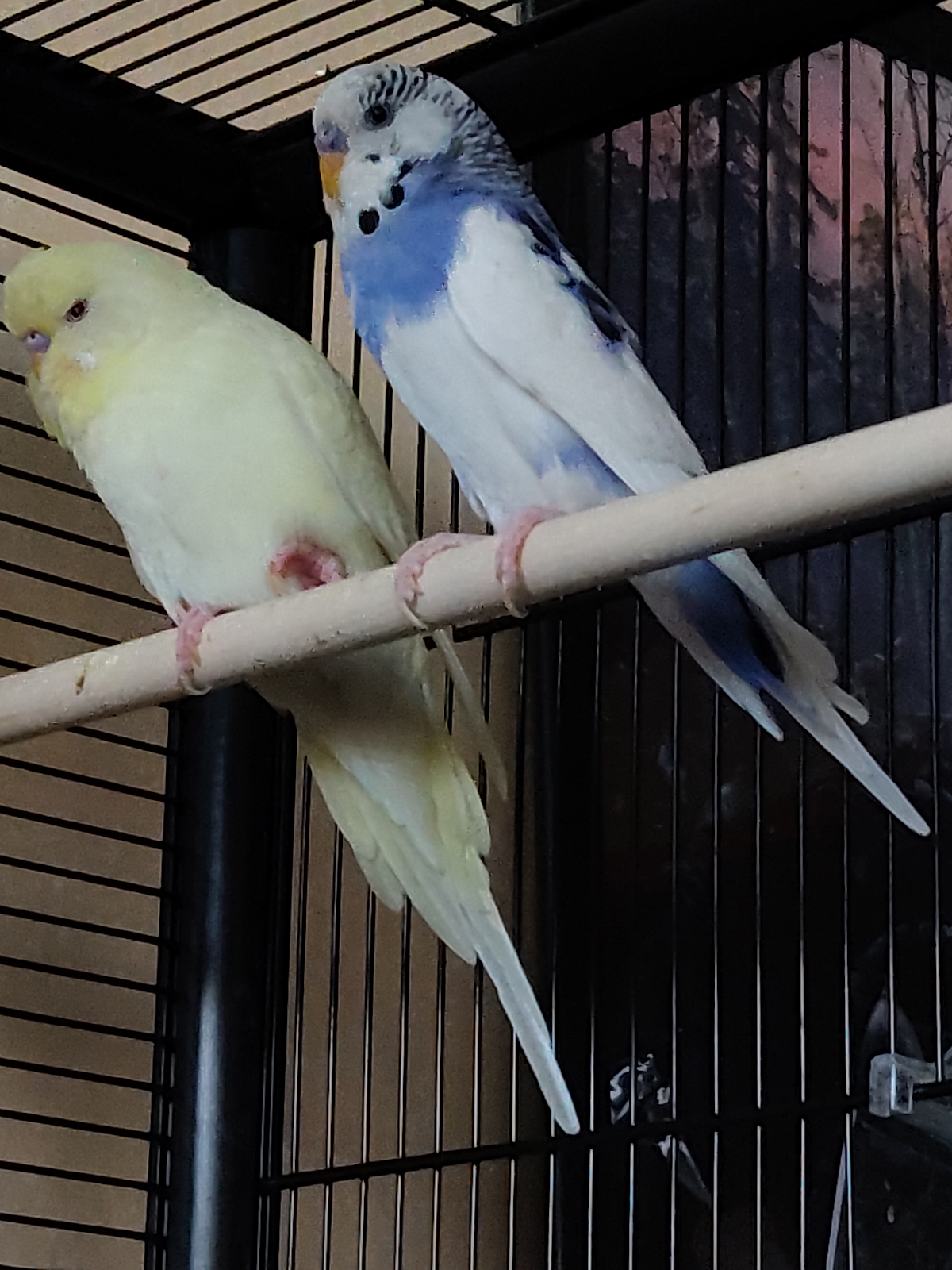 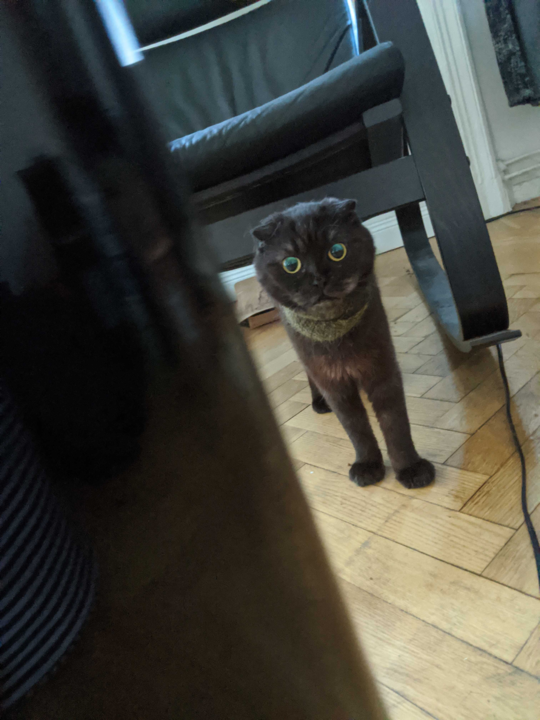 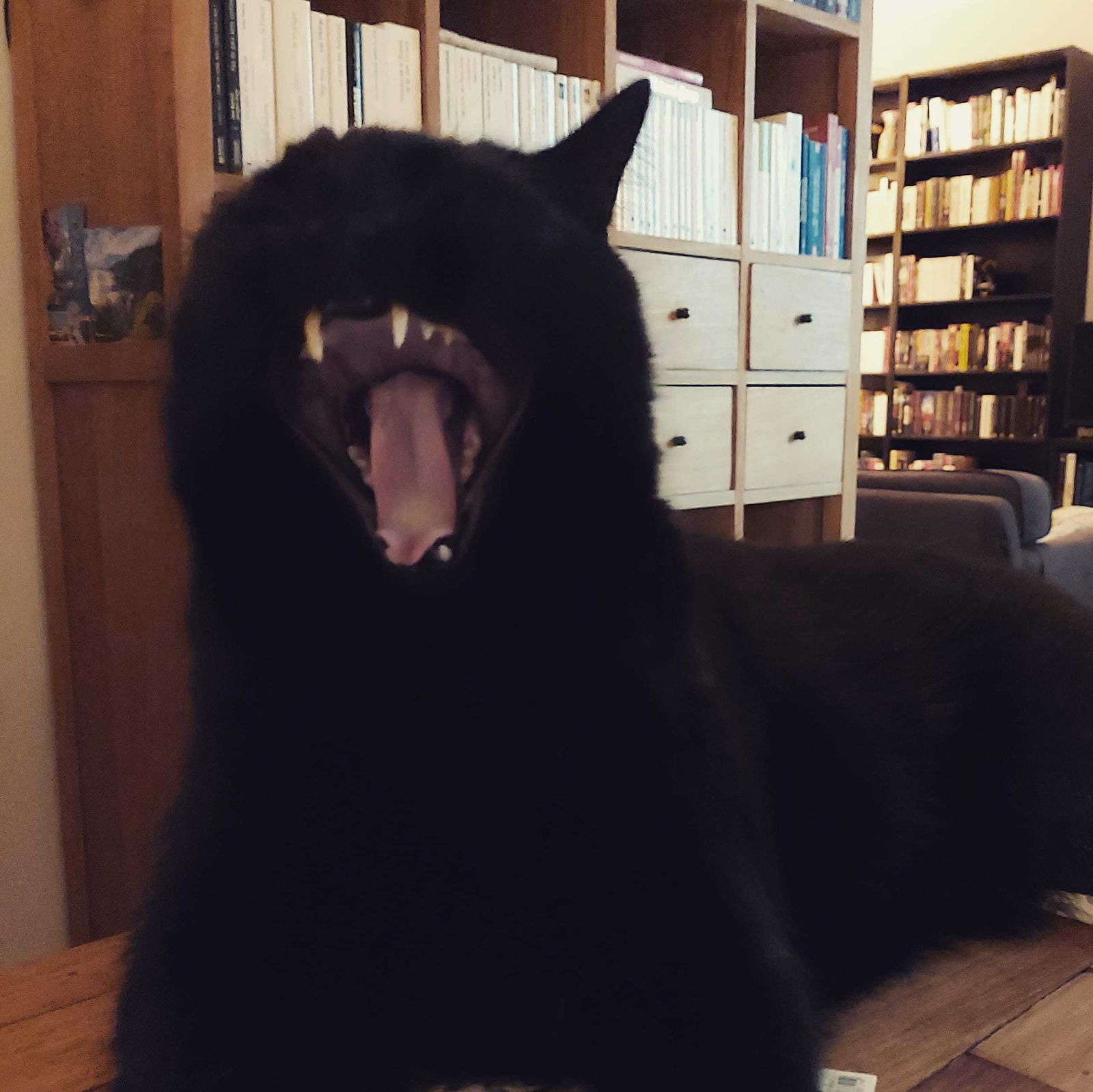 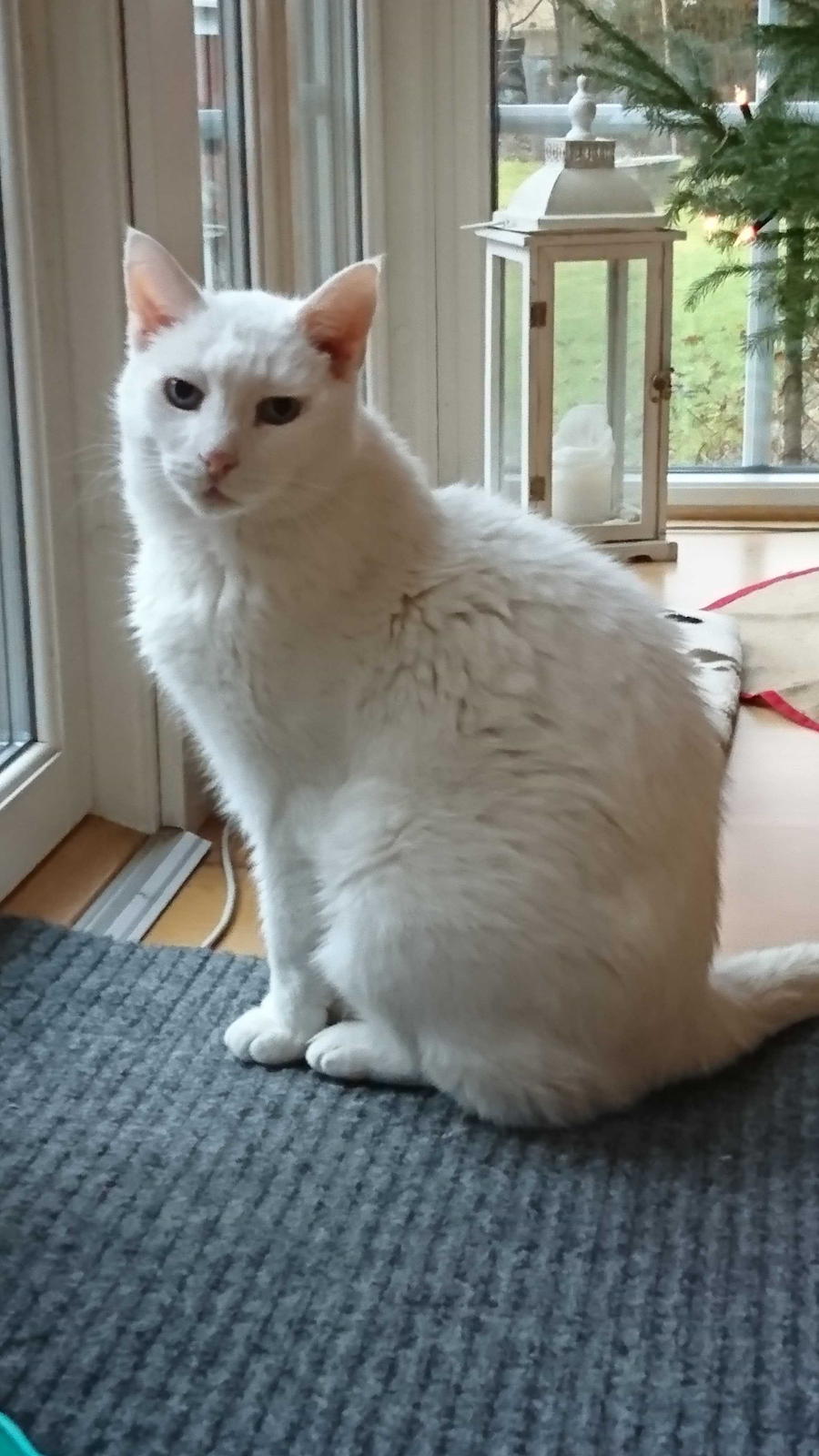 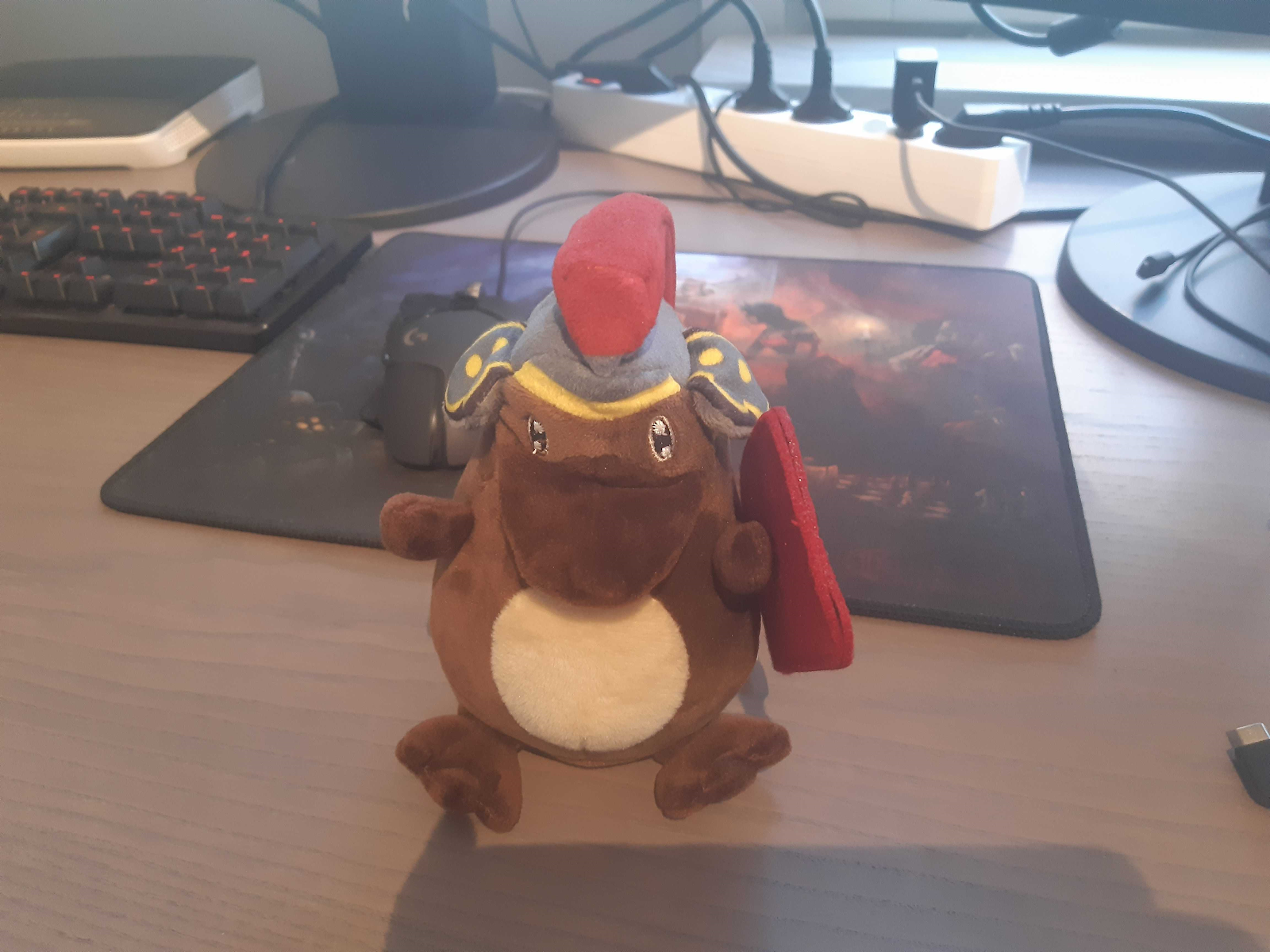 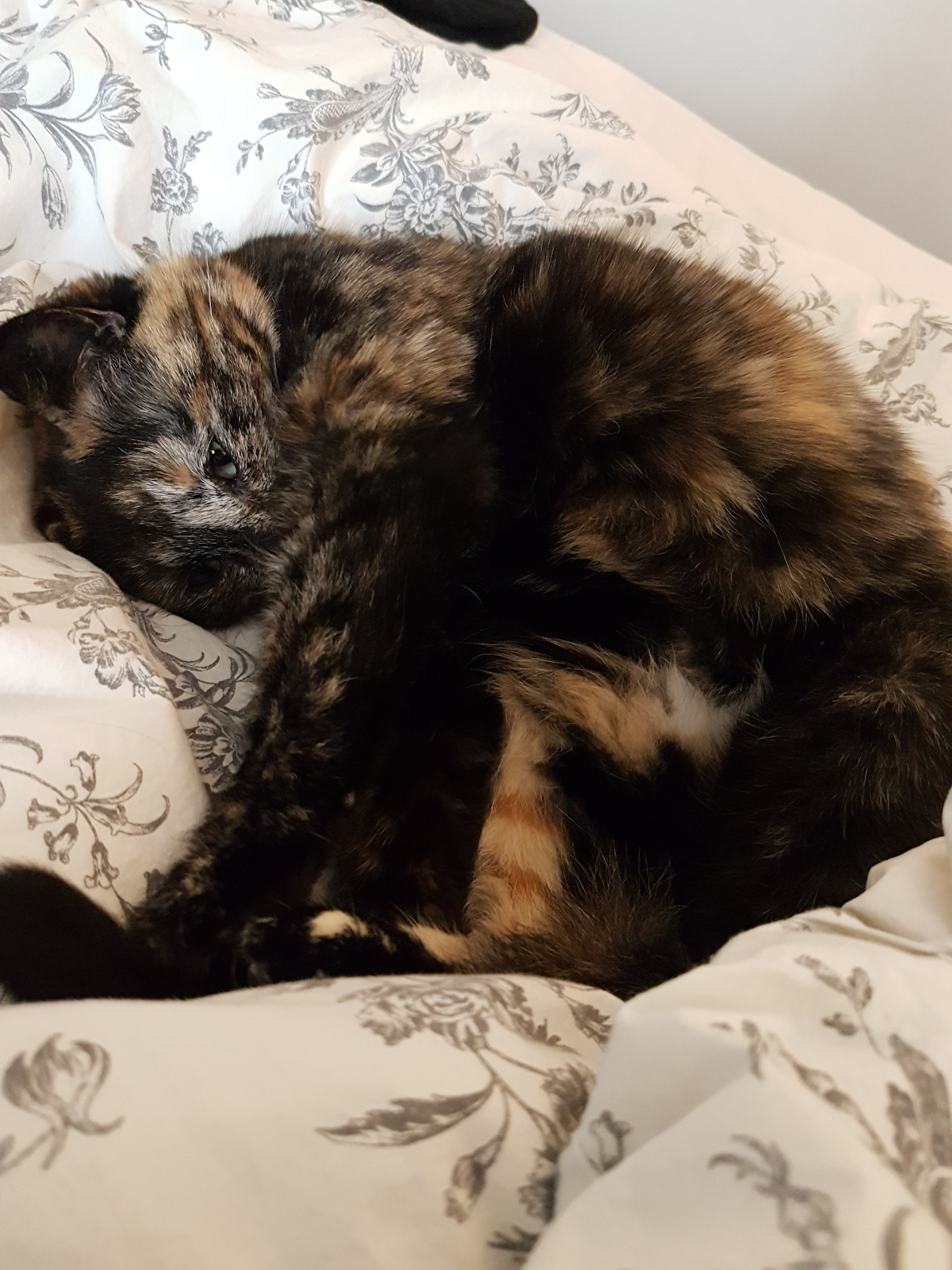 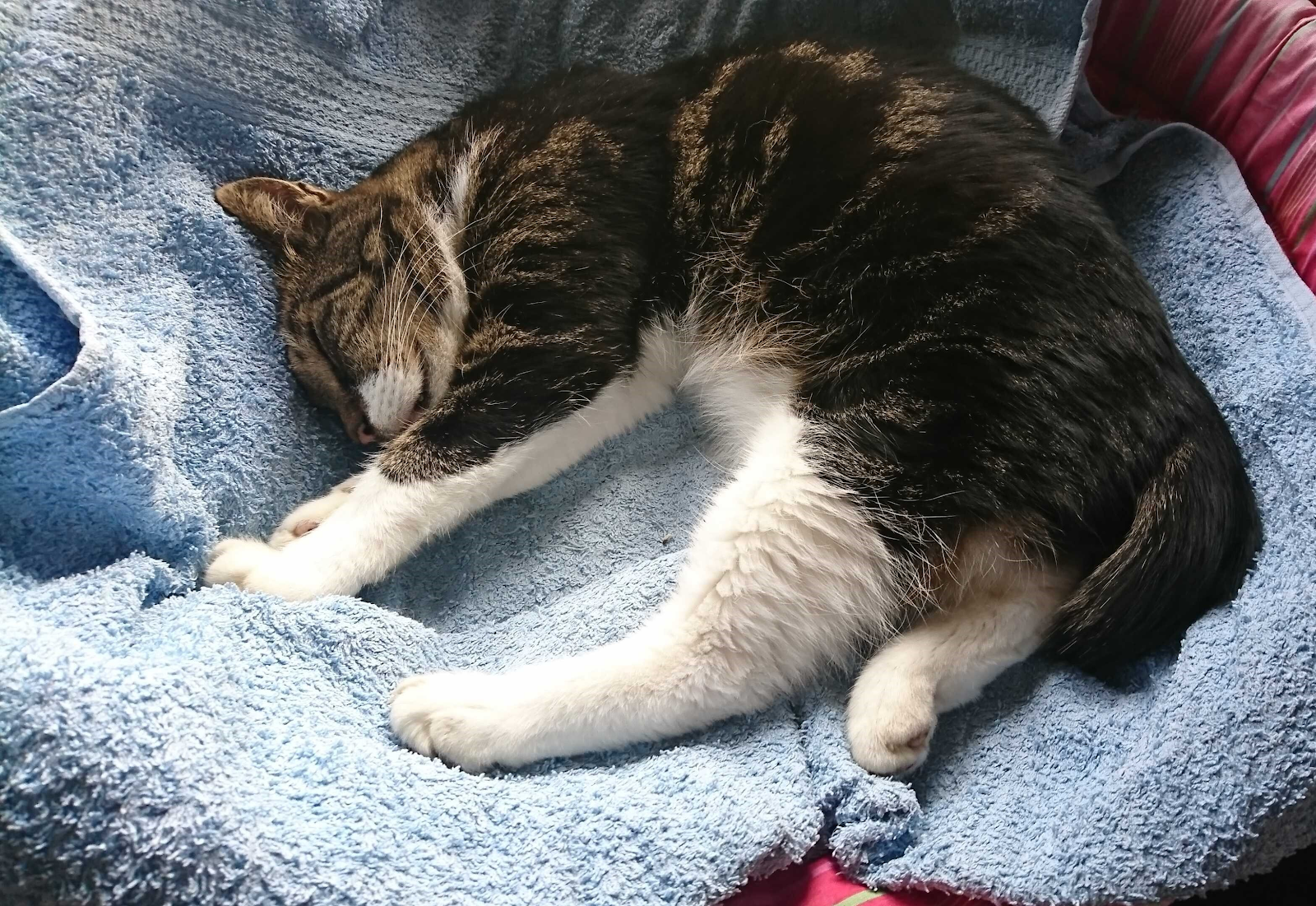 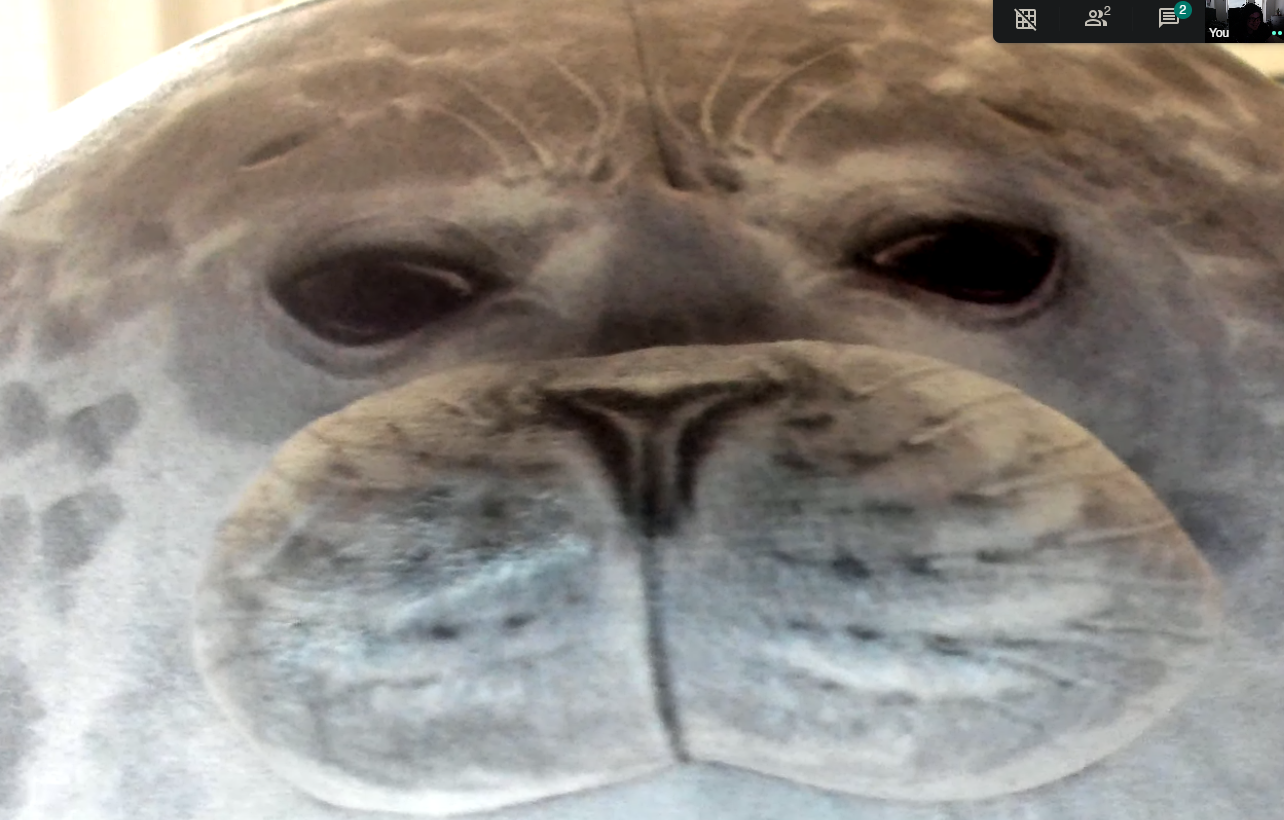 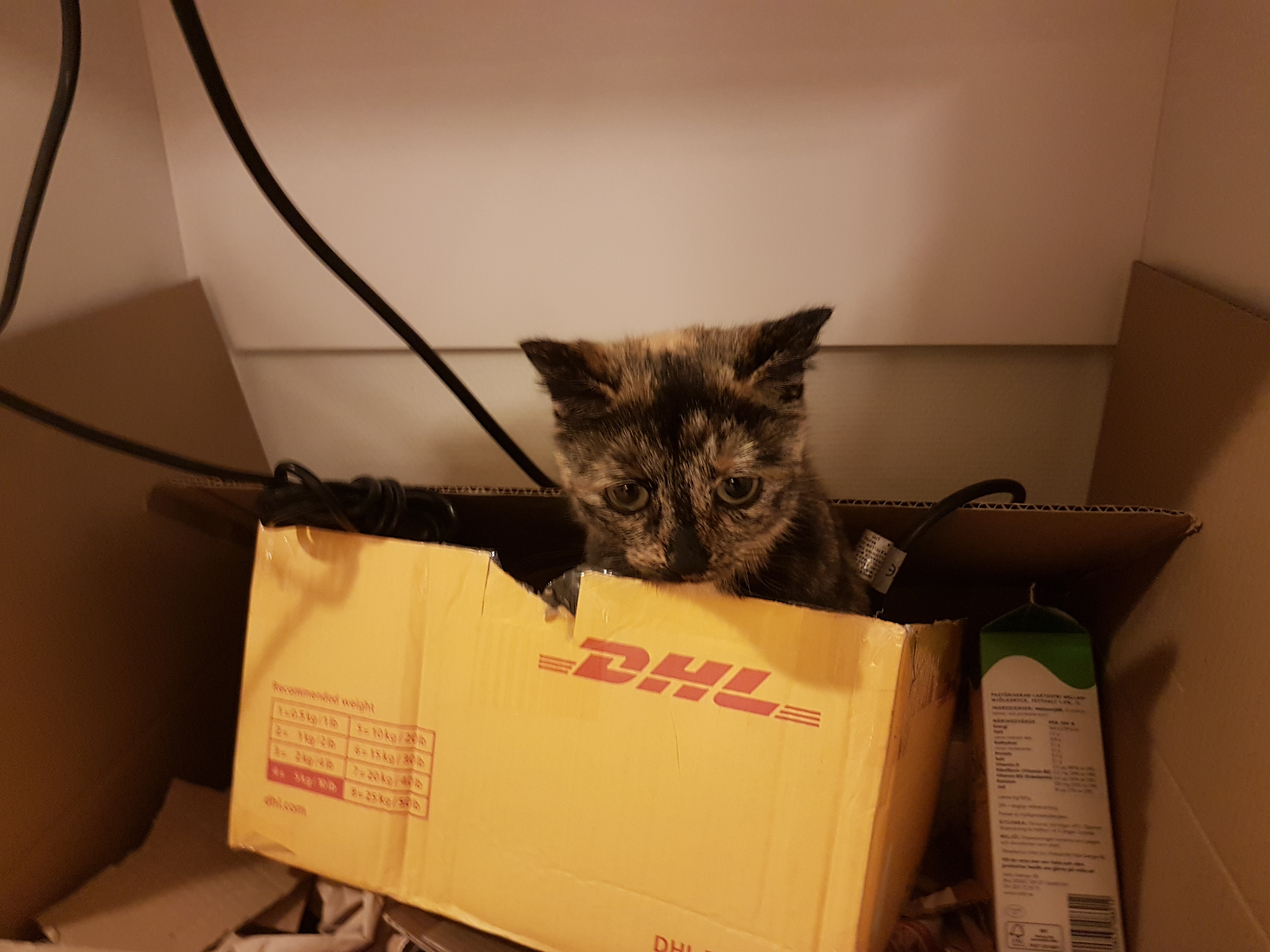 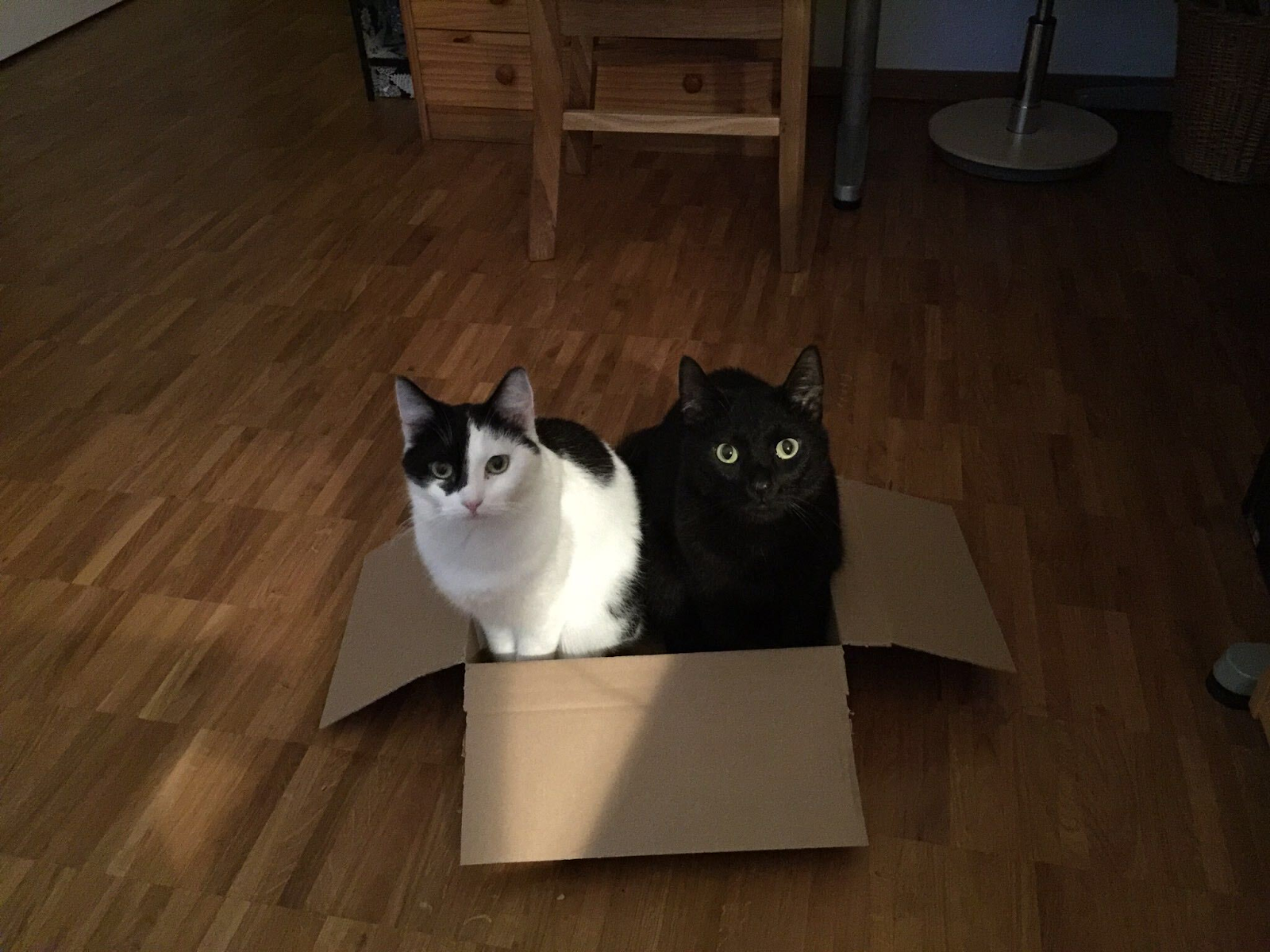 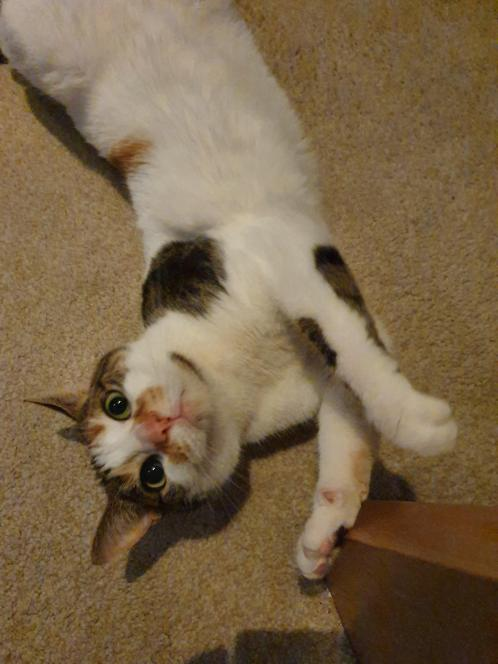 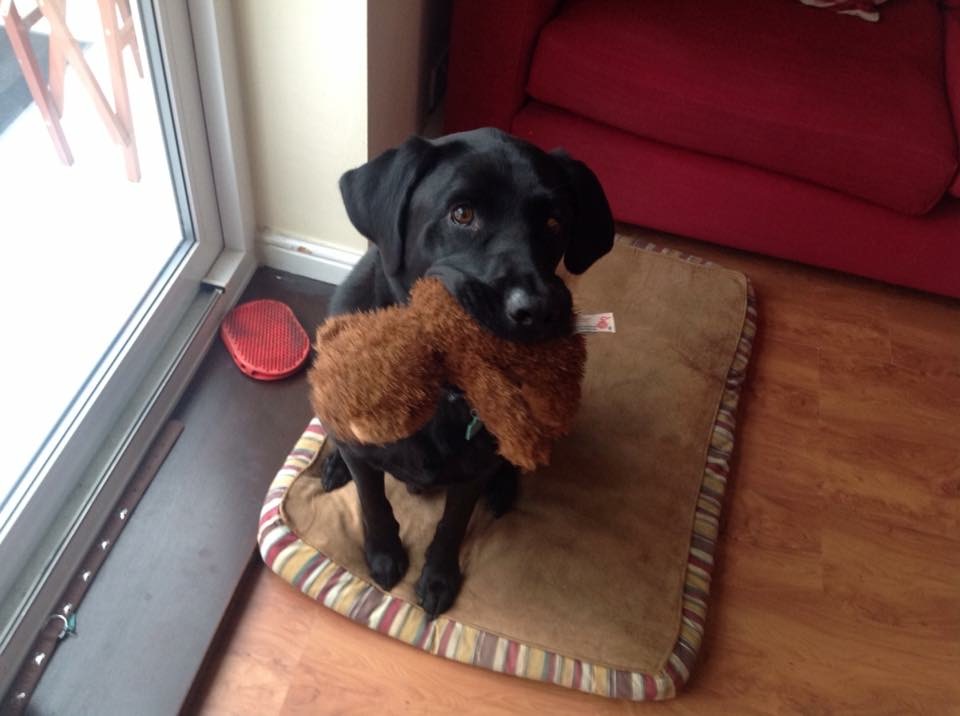 New system looks great no dobt. Thank you for the great change.

Tuo said:
The next dev diary will be on 21st.
Click to expand...

Thank u sirrr. Have a good one.

Depending which side of the contract you're talking about....

blackninja9939 said:
If the person dying is a higher tier than the heir then the heir gets the person's dying's contract. If they are the same tier or below then the heir if already landed will keep their current contract.
Click to expand...

It would be interesting if non landed titles, court positions and other privileges could be tied to landed title contracts as a bonus to give to your vassals, like making him/her almoner or cupbearer for life. A bit like grandees and peerships.
Toggle signature
Common sense is the less common of the senses.

You use the first contract you obtain of the highest rank you hold.

If you then inherited the County of Middlesex, you'd still use Kent.

blackninja9939 said:
If the person dying is a higher tier than the heir then the heir gets the person's dying's contract. If they are the same tier or below then the heir if already landed will keep their current contract.
Click to expand...

If you get gain more and more titles then they get added onto the titles you have as a part of that existing contract between you and the liege.
Click to expand...

My big question is that does the relationship between religions affect whether a liege lord is likely to grant a vassal religious protection. Is an "evil" vassal less likely to be granted protection than an "astray" vassal? Will an "evil" liege grant it at all?
Toggle signature
"Leave my planet, Ice King!"

Since we all love immersion... it would be great if the contract showed the date of the last modification and the names and wax seals of those parties. Renegotiations could add new names, seals and dates underneath to create a running view of historical parties. Original or unknown initial dates could default to the phrase “time immemorial.” A more scrawl, scribe-like, or Gothic font, possibly variable by region.

Do contracts remain in force for a title regardless of the holder, and regardless of its creation... say if it goes extinct, merged with the crown and then is recreated and granted?
Reactions:

Since we all love immersion... it would be great if the contract showed the date of the last modification and the names and wax seals of those parties. Renegotiations could add new names, seals and dates underneath to create a running view of historical parties. Original or unknown initial dates could default to the phrase “time immemorial.” A more scrawl, scribe-like, or Gothic font, possibly variable by region.

Do contracts remain in force for a title regardless of the holder, and regardless of its creation... say if it goes extinct, merged with the crown and then is recreated and granted?
Click to expand...