Menu
Install the app
You are using an out of date browser. It may not display this or other websites correctly.
You should upgrade or use an alternative browser.
Crusader Kings III 11139 MP Open Beta Feedback 19 Bug Report 6762 Tech Support 782 Multiplayer 82 User Mods 984 After Action Reports (AAR) 144 Suggestions 2686
Previous Dev Diary Next Dev Diary
Show only dev responses 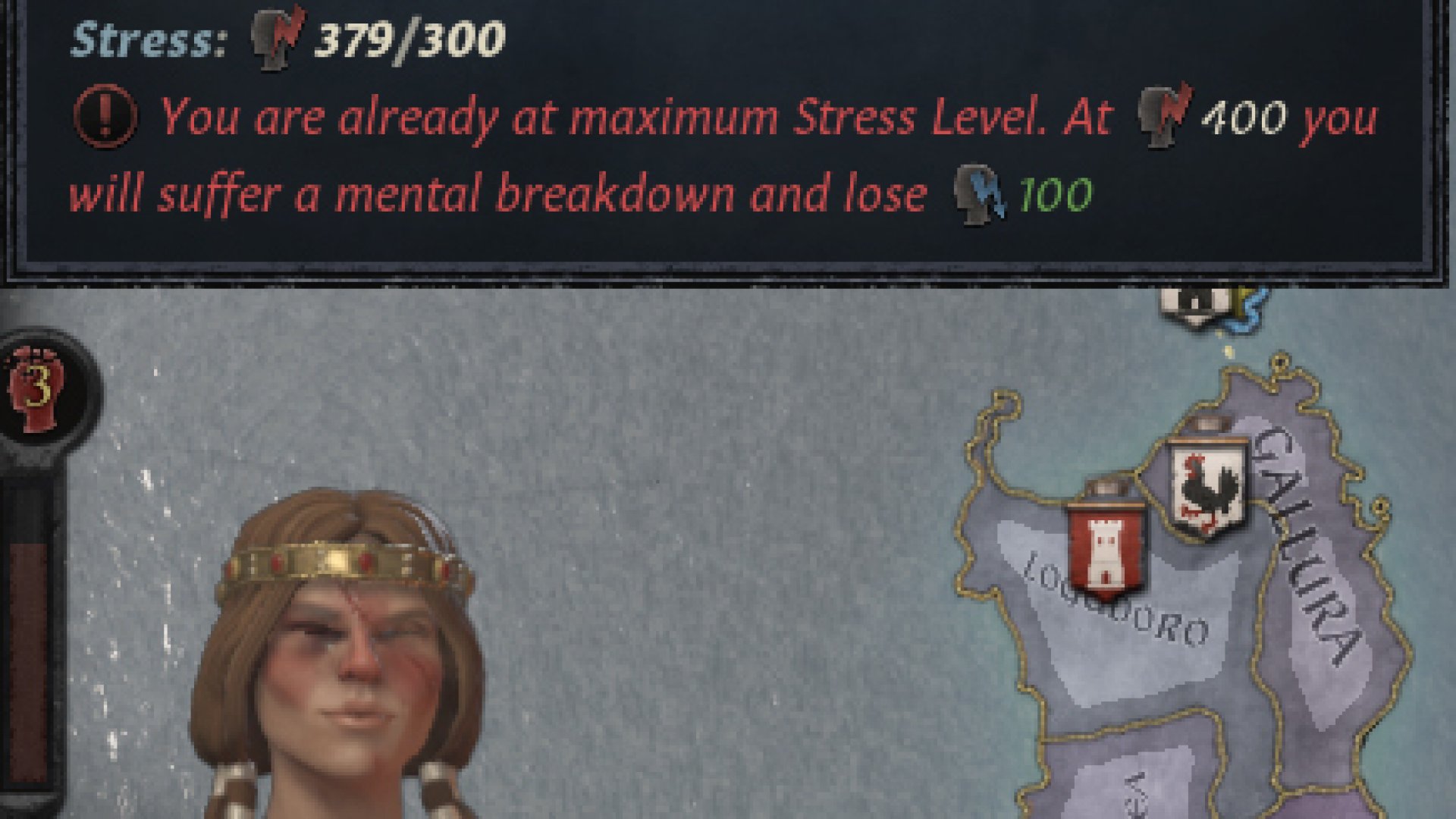 Dev Diary #31 - A Stressful Situation
Hello everyone! I come to you today with the long-awaited Dev Diary on how Stress works in Crusader Kings III! While the system is relatively straightforward, it does have some rather far-reaching ramifications for how characters choose to behave, so let us dive right in! 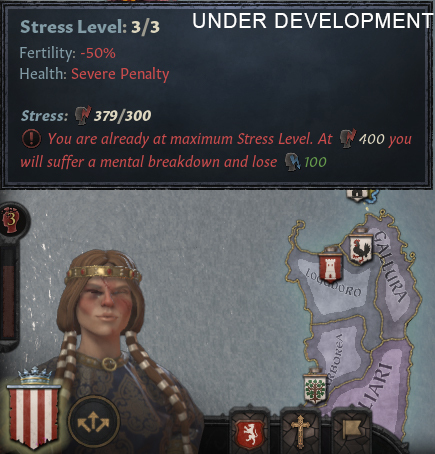 [A screenshot showing the player character with nearly-maxed out Stress]

The primary way that characters gain Stress is when the demands of the realm force them to take actions which go against their nature. For example, a Compassionate character will gain Stress for executing prisoners in the dungeon, even if those prisoners were traitorous rebels or, ahem… inconveniently positioned in the line of succession. 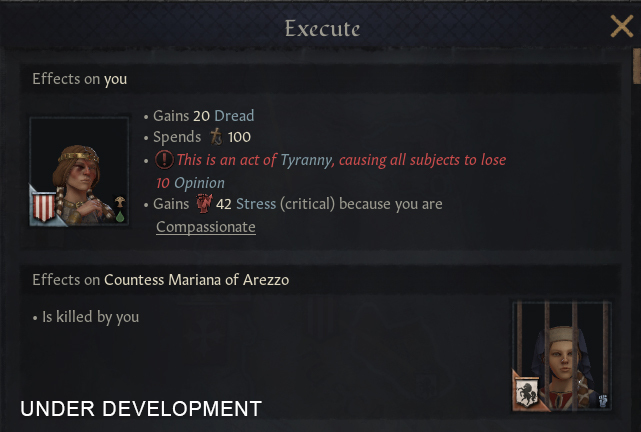 There are other sources of Stress too, though. Being locked up in the dungeon of another character will gradually increase Stress over time, as the isolation and neglect take their toll on your psyche. Other causes include overwork or the death of a loved one. Regardless of the source, once a character accumulates enough Stress to pass a certain threshold and gain a Stress Level, they will suffer from a Mental Break.

Mental Breaks are a special kind of event which occurs when Stress overwhelms a character and compels them to do something — anything — to gain relief. Exactly what type of Mental Break a character has depends heavily on their personality traits, and each one gives the character several options for dealing with the situation they have found themselves in. 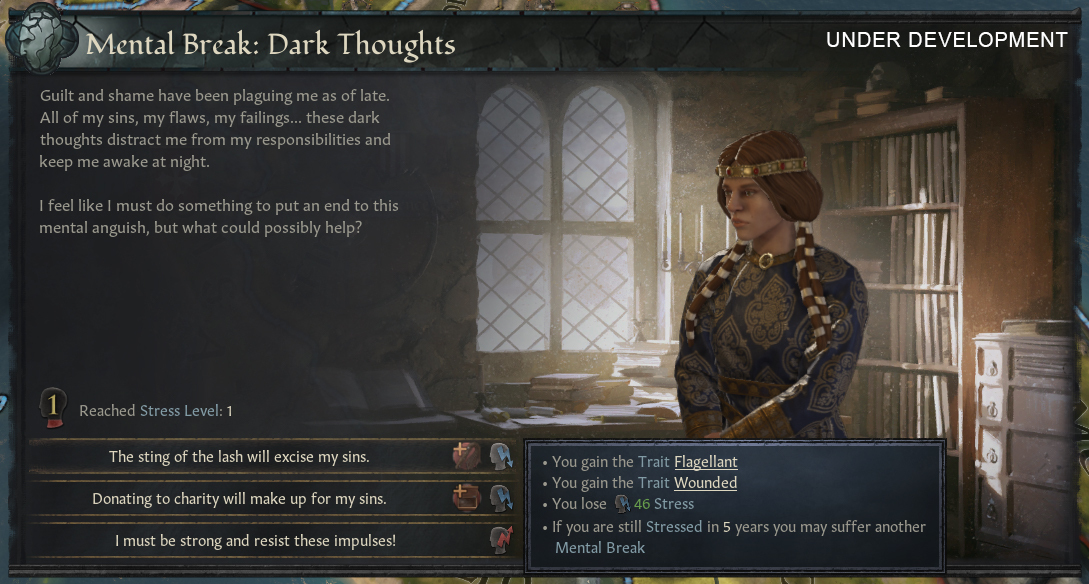 Not all Mental Breaks are equal, and the severity of the Mental Break will depend on your Stress Level when the event occurs. A Level 1 Mental Break may cause a Wrathful character to yell at one of their vassals in front of the whole court, insulting them and wounding their pride… but a Tier 3 Mental Break may instead drive that same character to murder their chosen heir in a fit of rage!

In addition to differing by Stress Level, some Mental Breaks are influenced by the situation you find yourself in. As an example, characters who are locked up in a dungeon cell will suffering from completely different Mental Breaks (often of greater severity), some of which can radically change their personality. 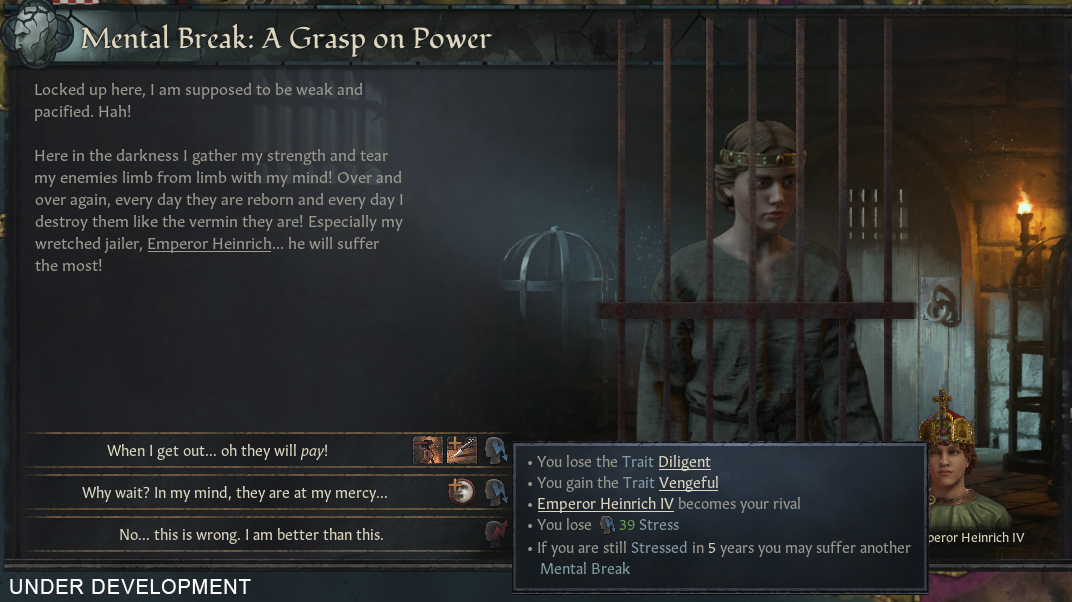 Coping Mechanisms
Coping Mechanisms are traits that represent the long-term methods characters have developed to deal with the Stress of their life. Most of them impose some form of minor penalty on a character’s skills, but in exchange they will enhance the potency of all forms of stress loss. 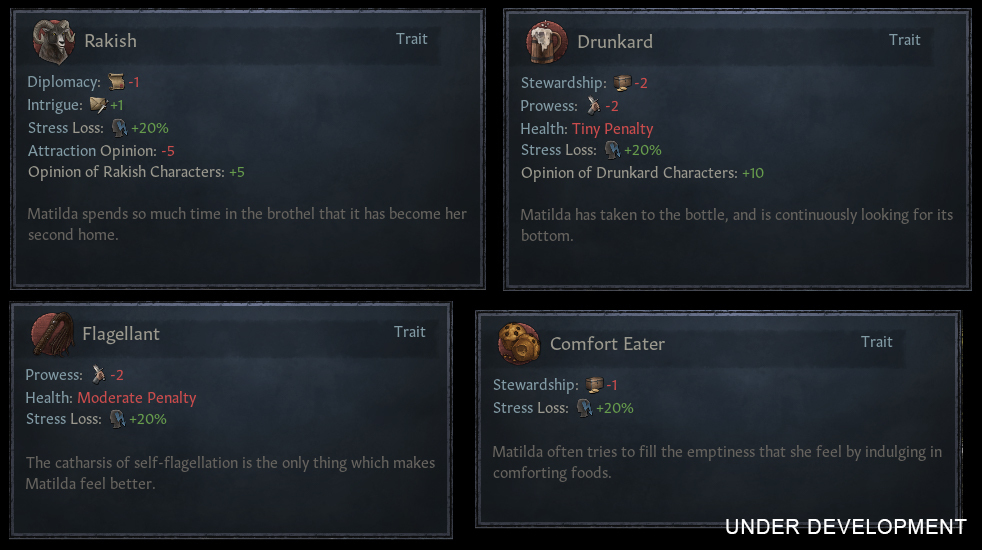 In addition to the passive effects of each trait, each one also enables a unique Decision characters can take to indulge in their vice and relieve a portion of their accumulated stress. 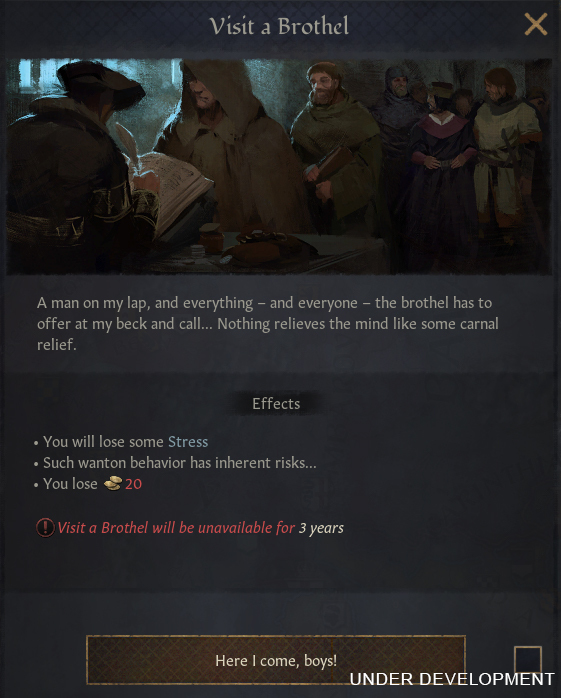 Regardless of the form it takes, all Coping Mechanisms are useful in one form or another. Having the ability to make Stressful decisions at-will is often more useful than a few extra points of Diplomacy or Stewardship, and each Coping Mechanism a character acquires makes it progressively easier for them to manage their Stress. It is expected that most rulers will acquire 1 or 2 Coping Mechanisms during their lifetime, though in some rare circumstances a character may end up with more.

Strategic Considerations
As developers, our goal with the Stress system is not to prohibit or punish players for taking certain actions, but rather to make them think twice about otherwise no-brainer decisions. Is it really worth it to execute that foreign claimant when doing so will give you 42 Stress? Maybe, but maybe not! That is a decision you will need to make when the time comes.

In this way, Stress also gives us another tool we can use to balance the various personality traits against each other. Some traits like Ambitious and Compassionate may have higher numerical bonuses, but they cause you to acquire Stress more frequently or in larger amounts. Others like Sadistic may make your vassals loathe you, but your character won’t be bothered by pesky concerns like morality when they have to do what needs to be done. Who knows... they might even enjoy it!

Regardless of what personality traits your character has, the optimal strategy with Stress is often not to avoid acquiring Stress at all costs, but rather to strategically acquire certain Coping Mechanisms and leverage them intelligently to keep your character’s Stress at ideal levels. Managing your character’s Stress well will ensure you are always able to take advantage of any opportunities that come your way, while behaving recklessly may leave you Stressed to the point of insanity during a crucial moment of your reign… 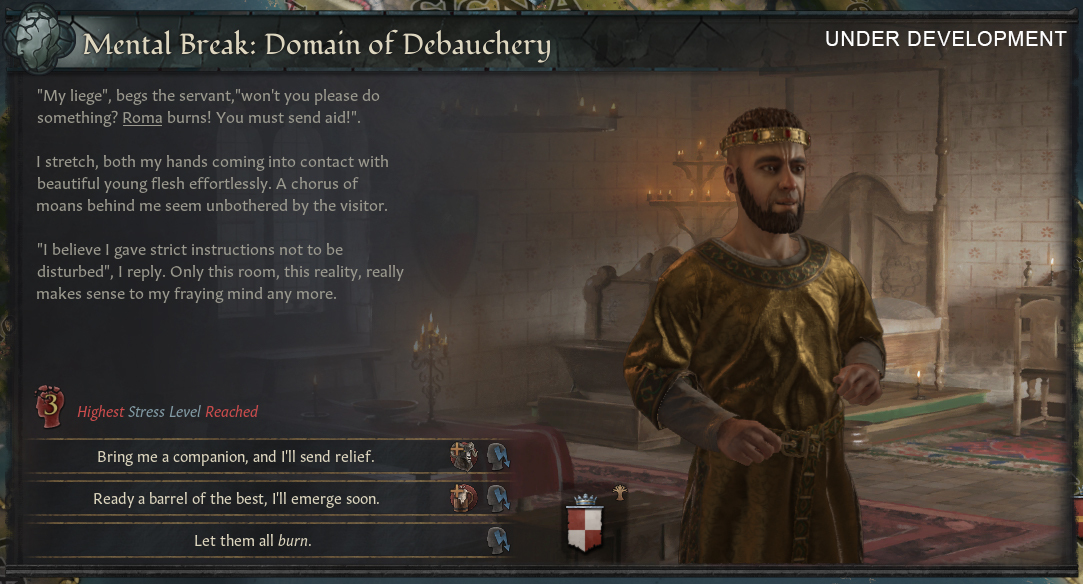 Anyway, that is all I have for you this week. I hope this has given you some insight into how the Stress system works in Crusader Kings III, and that this has inspired everyone to think of new and creative ways to leverage the system to its full potential! Feel free to ask any questions you have in the comments, as I will be sticking around for a few hours to explain and elaborate on the Stress system.
Last edited: Jun 16, 2020
Reactions:

Nice, some will have stress in waiting for the game to come out I imagine.
Reactions:

Er, a woman visiting a male brothel? I'd like at least a modicum of historical sensibility (not saying there couldn't be exceptions for certain cultures/religions).
Last edited: Jun 16, 2020
Toggle signature
Jewish Immersion for Crusader Kings II: An extensive Jewish namelist, dynasty, and province name overhaul.
Reactions:

Poor Matilda! What have you done to her!?
Toggle signature
CK3 Mod: Sunset Invasion
GEDCOM to CK3 conversion tool

I really don’t know about this. I have a bad feeling to be forced to play some kind of char which I do not want to.
Sure in some games I enjoy to play like the chars stats, however in others I don’t.
Reactions:

Great read, I can't wait to see how this feels. I really like the idea of stress levels affecting how severe the mental break is!
Toggle signature
Victory is bought, not earned.
Reactions:
E

Fallender said:
I really don’t know about this. I have a bad feeling to be forced to play some kind of char which I do not want to.
Sure in some games I enjoy to play like the chars stats, however in others I don’t.
Click to expand...

I mean, it is a role playing game disguised as a grand strategy game. If you don't want to play a character might I suggest EU4?
Reactions:

Now this, this is a cool mechanic. I can't wait to stress myself to early grave!
Reactions:

Baron von Shoes said:
Not all Mental Breaks are equal, and the severity of the Mental Break will depend on your Stress Level when the event occurs. A Level 1 Mental Break may cause a Wrathful character to yell at one of their vassals in front of the whole court, insulting them and wounding their pride… but a Tier 3 Mental Break may instead drive that same character to murder their chosen heir in a fit of rage!
Click to expand...

Keizer Harm said:
Poor Matilda! What have you done to her!?
Click to expand...

My thoughts exactly! One of my favourite starts in CKII before they added earlier start dates. She deserves better.
Toggle signature
My suggestions to improve Imperator: Rome:
Proposed Improvements to Armenia and its Environs
New Cultures, Tags, and other Improvements to Anatolia
New Deities and religious flavour for the Near East.
Proposed improvements to the central Anatolian Steppe
A new set of Military Traditions for the Regna Minora of the Near East
Reactions:

So coping mechanisms are quite cool, but I wonder/worry about cooldown times? So visiting a brothel once every three years if you character is into that sort of thing doesn't seem very immersive to me (unless they were deeply religious, and therefore trying to counterbalance those competing stressors). I think also of Kings who would just go hunting and not focus on the job at hand of ruling the land - once every three years doesnt feel like much of a vice.

So will all coping mechanisms have a universal 3 year cooldown, or will some be ones that could be deployed every other week (but relieve less stress), and others be used sparingly (ones deepest darkest, most taboo vices)?

Also, will all things that stress you be bad, like executing someone etc, or will some be 'good' things, that you'd want to do in-game? So to use the hunting example again, if you're lazy and useless and just like hunting, would actually trying to rule stress you out, instead of being the wastrel you are at heart? Would make role playing as non diligent characters quite interesting.
Toggle signature
"A man does good business when he rids himself of a turd."

- Edward I; On Scotland
Reactions:

stress level only lower health?
or maybe there will be some event about bad at some jobs because of stress
hope there will be many different mental breakdown event one can choose
maybe some have eventchain about the consequence of breakdown
Reactions:

So, one can only visit the house of lady favours once every three years? Oh boi... no wonder that causes more stress than it cures^^
Reactions:

Mouthwash said:
Er, a woman visiting a male brothel? I'd like at least a modicum of historical sensibility.
Click to expand...

A woman relieving herself of stress with disposable and possibly paid lovers is nothing particularly strange, it's just the wording of that event that is clearly written for a man's point of view and then applied to women too even though it comes off as weird in certain parts (a man on her lap? That's an odd mental image).

Not entirely sold on the 'levels' of stress, just seems a bit too abstract for my liking. Perhaps your stress counter and the exact numeric effect of stressful events could be hidden, and instead we could be given a gradient from 'Not Stressed' to 'Extremely Stressed' for our stress level, and the effect of events measured similarly (an event been 'extremely stressful' instead of "+44 stress" example)? That way, there could just be a higher chance of more disastrous mental breaks at higher levels, rather than hard capping them, and we'd also not have perfect information on stress (like with health) which I think would be better. Otherwise I do really like the look of the mechanic overall, definitely one of the best roleplaying mechanics that we've been shown in my opinion.
Reactions:

Is there a chance that the characters could inadvertently kill themselves while trying to de-stress? The Flegallent in particular looks like it could potentially be dangerous a weaker character.
Toggle signature
Hearts of Iron IV:
Also Check out my Suggestion to Fix the US Presidency in HOI4
Expanded News Events
Greek Political Parties Suggestions
Byzantine Emperor Suggestions