Jump to latest Follow Reply
Menu
Install the app
You are using an out of date browser. It may not display this or other websites correctly.
You should upgrade or use an alternative browser.
Crusader Kings III 14001 MP Open Beta Feedback 25 Bug Report 9219 Tech Support 1186 Multiplayer 104 User Mods 1277 AARs (After Action Reports) Suggestions 3754
Previous dev diary Next dev diary
Show only dev responses 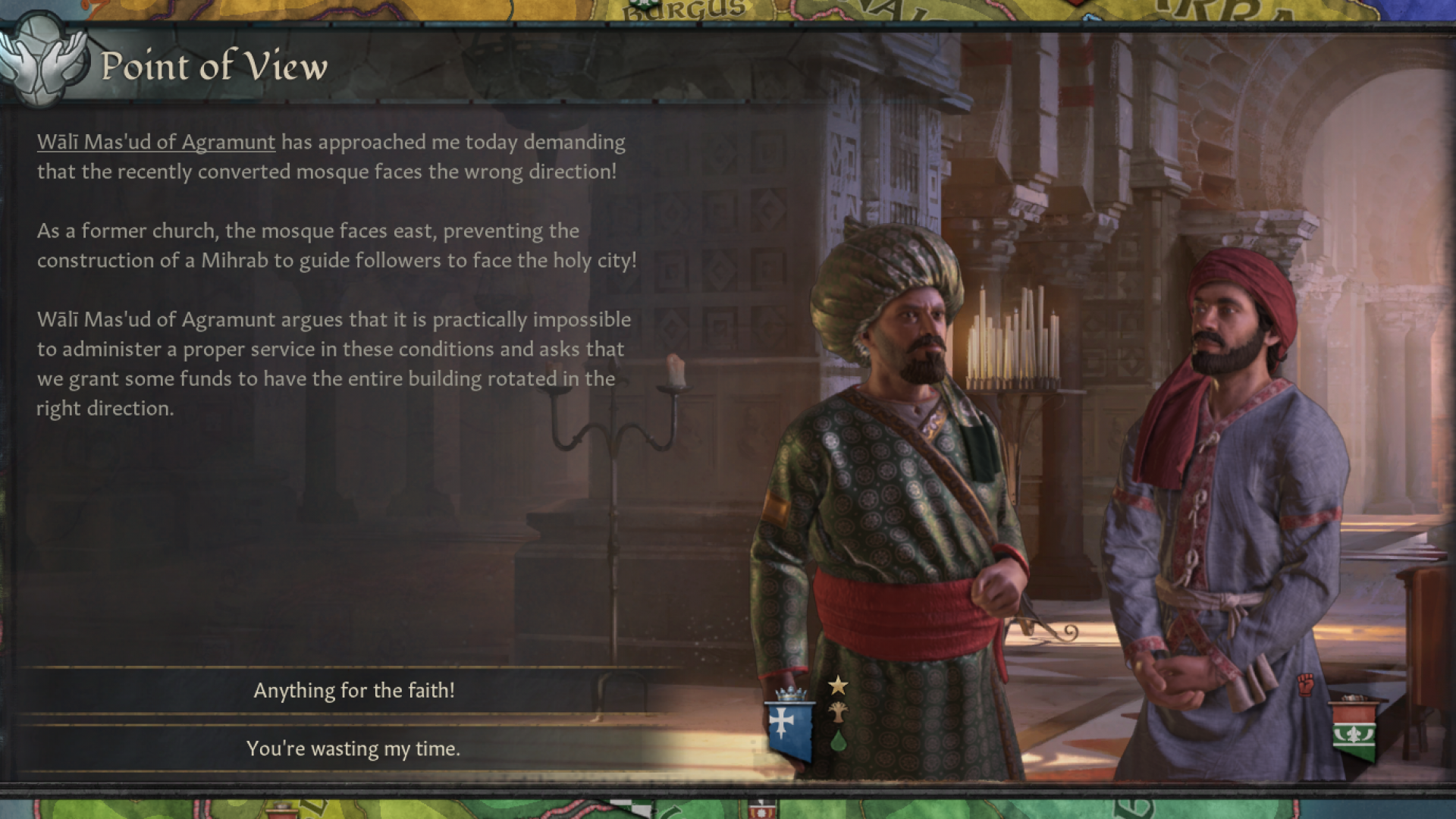 Fate of Iberia was released just last week, and we hope you’re all enjoying shaping the peninsula according to your own ideas and ideals! Are you dominating it by force, or trying to reconcile the inhabitants’ differences? Have any of you encountered the elusive wandering monk yet?

Anyhow, we’re hard at work with the 1.6.1 update, where we’re tweaking some balance, fixing issues found by you in the community, and also adding in a few new goodies (more on that below). We’re also working on a fix for those of you who can’t start the game (the AVX issue), which will come out before the full 1.6.1 update. Remember to pop by the bug forums if you have a problem: it’s the best way to make sure we know about your game issues!

With Fate of Iberia in your hands, we’ve now concluded the Royal Edition, and we’re overjoyed to see so many of you playing and enjoying the game. Please, keep sending us great feedback, we appreciate it a lot - your thoughts are very valuable to us!

We are now setting our eyes on the future. We have many plans, both big and small - I cannot go into detail as it’s too early yet, but rest assured that we have many exciting things coming up! We’re taking a long, hard look at what we’ve done and achieved since the release of CK3; we’re evaluating, adjusting, and setting a course that we’re sure will be to your liking!

Now, to round this Dev Diary off, we’d like to tease some new content coming along with the 1.6.1 update:

For owners of Fate of Iberia, we’re adding a few religiously-flavored events about Sephardic Jews, Conversos, the direction of mosques, and so on - with interesting choices on how to handle various situations. Here’s one example (don’t want to spoil them all!) 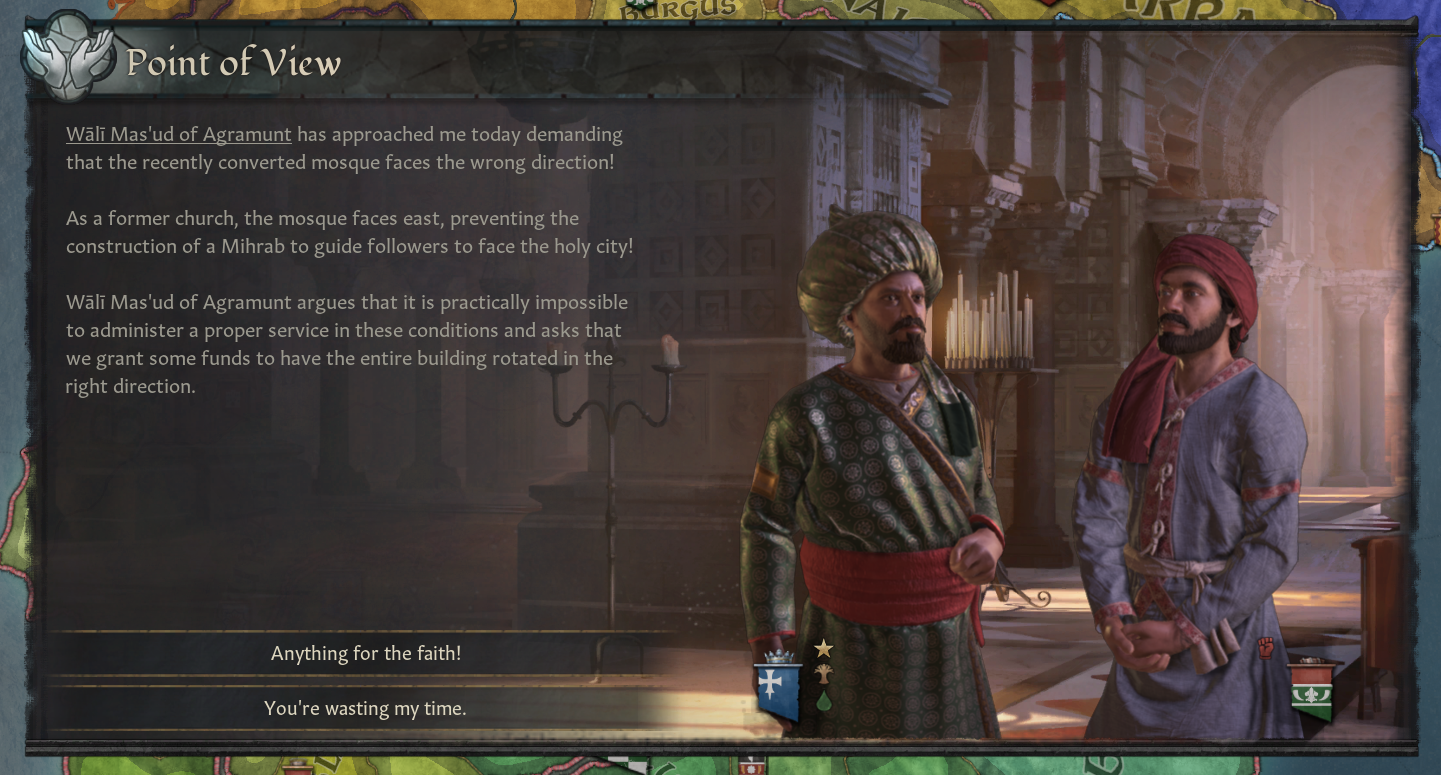 Outside of Hispania, but still in the vicinity, we’re doing a small update to the Canary Islands, who will, among other things, receive their own pagan faith and some monolithic ambitions. 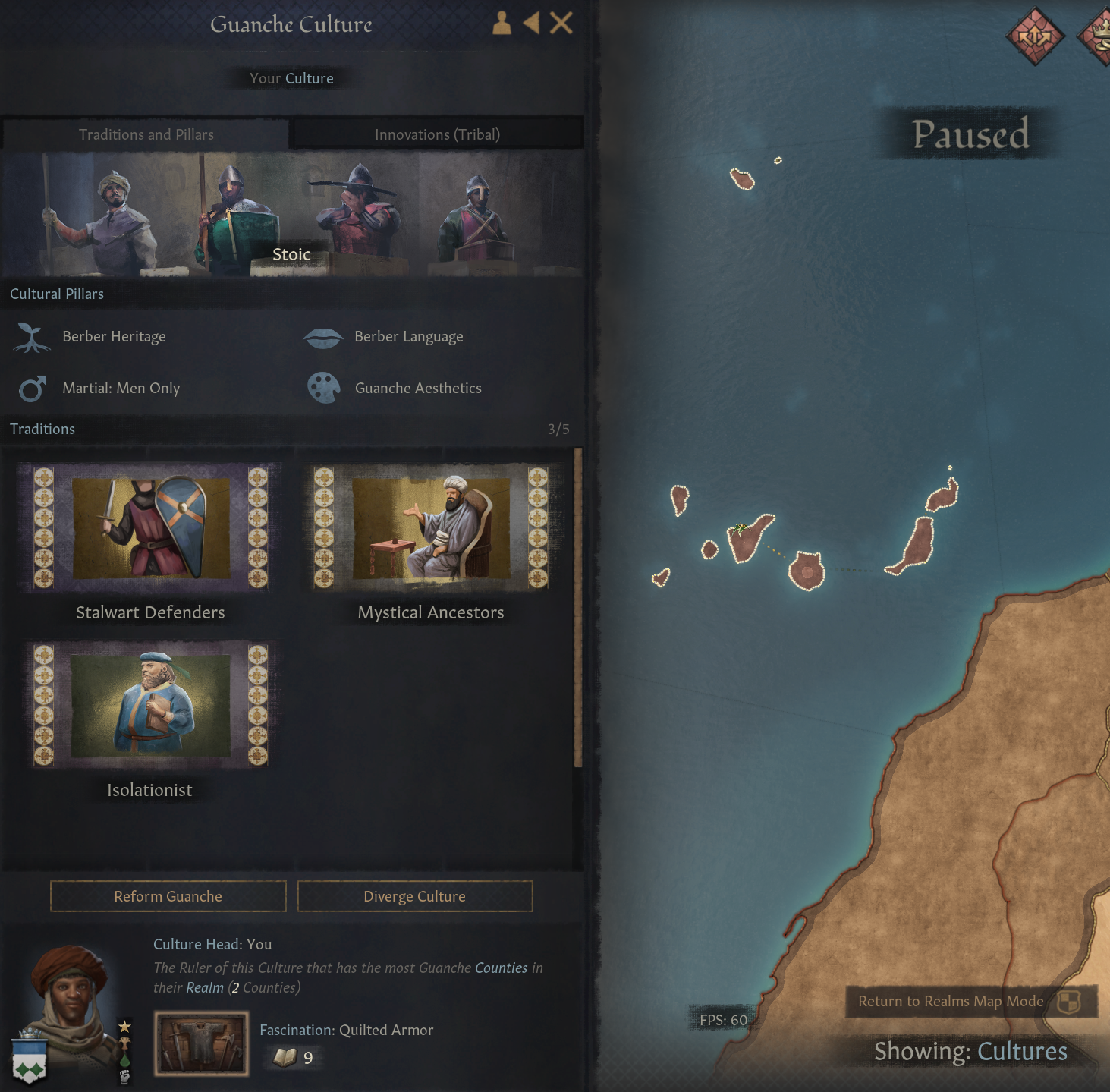 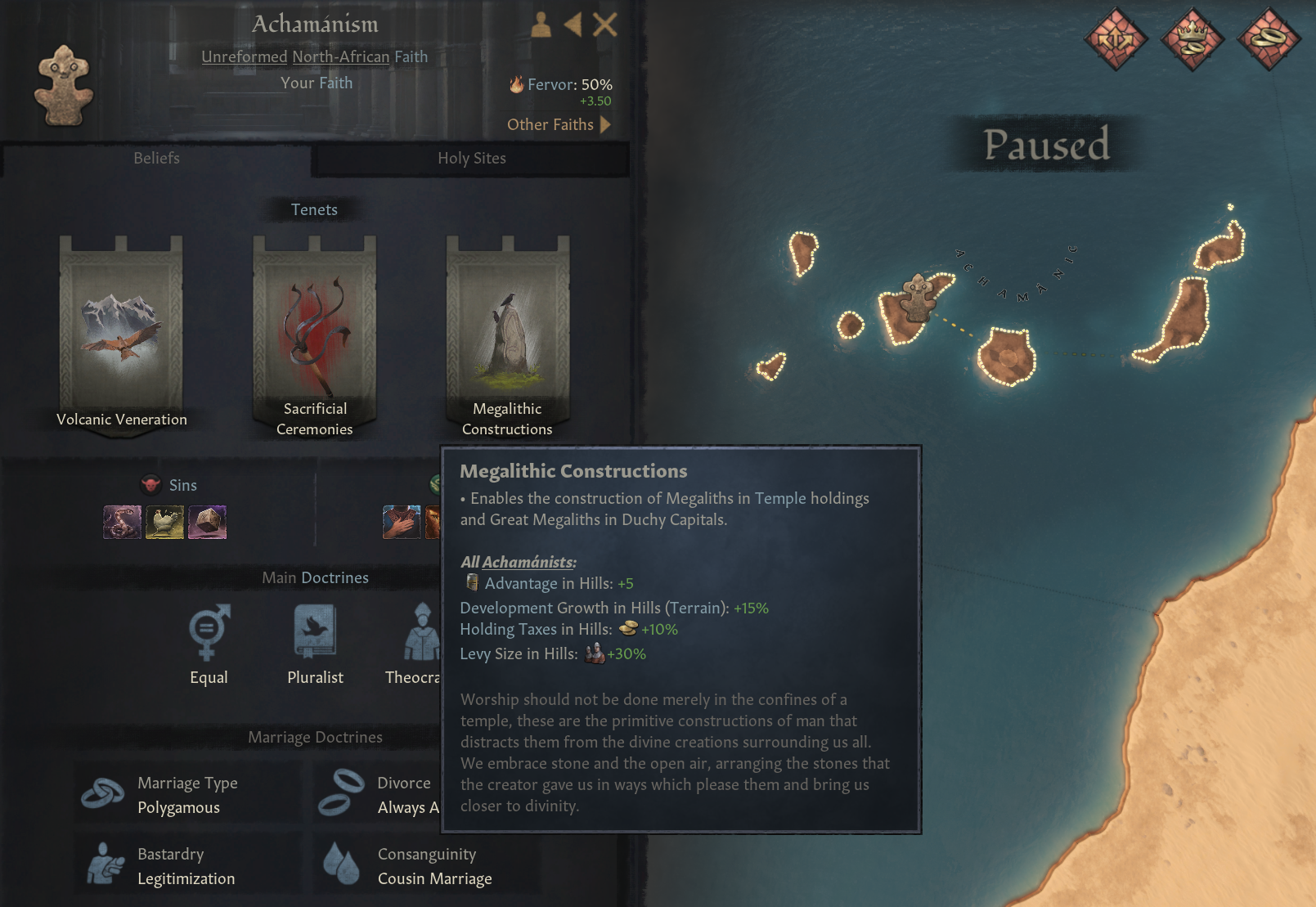 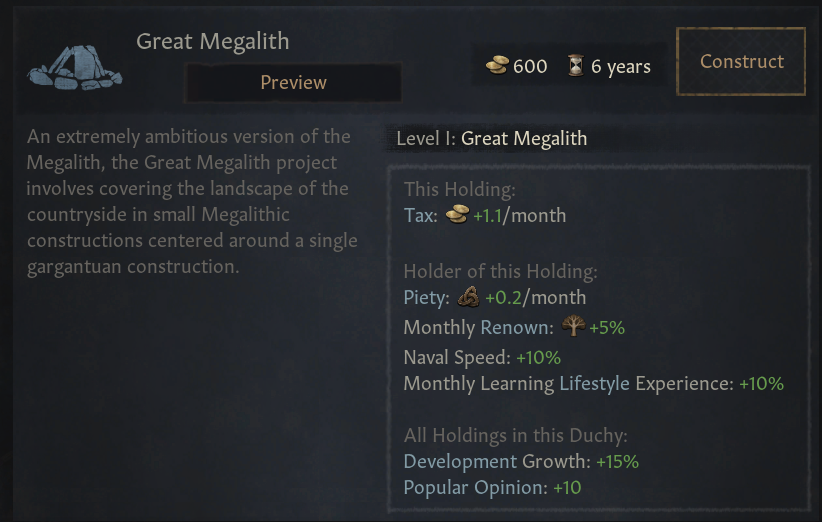 We’re adjusting how feudalization works in the West African sphere, enabling rulers to transition out of the tribal government while retaining their native faiths without requiring them to reform those faiths. This is to better model methods of urbanization and centralization in West Africa, though they will also retain access to the old path too. 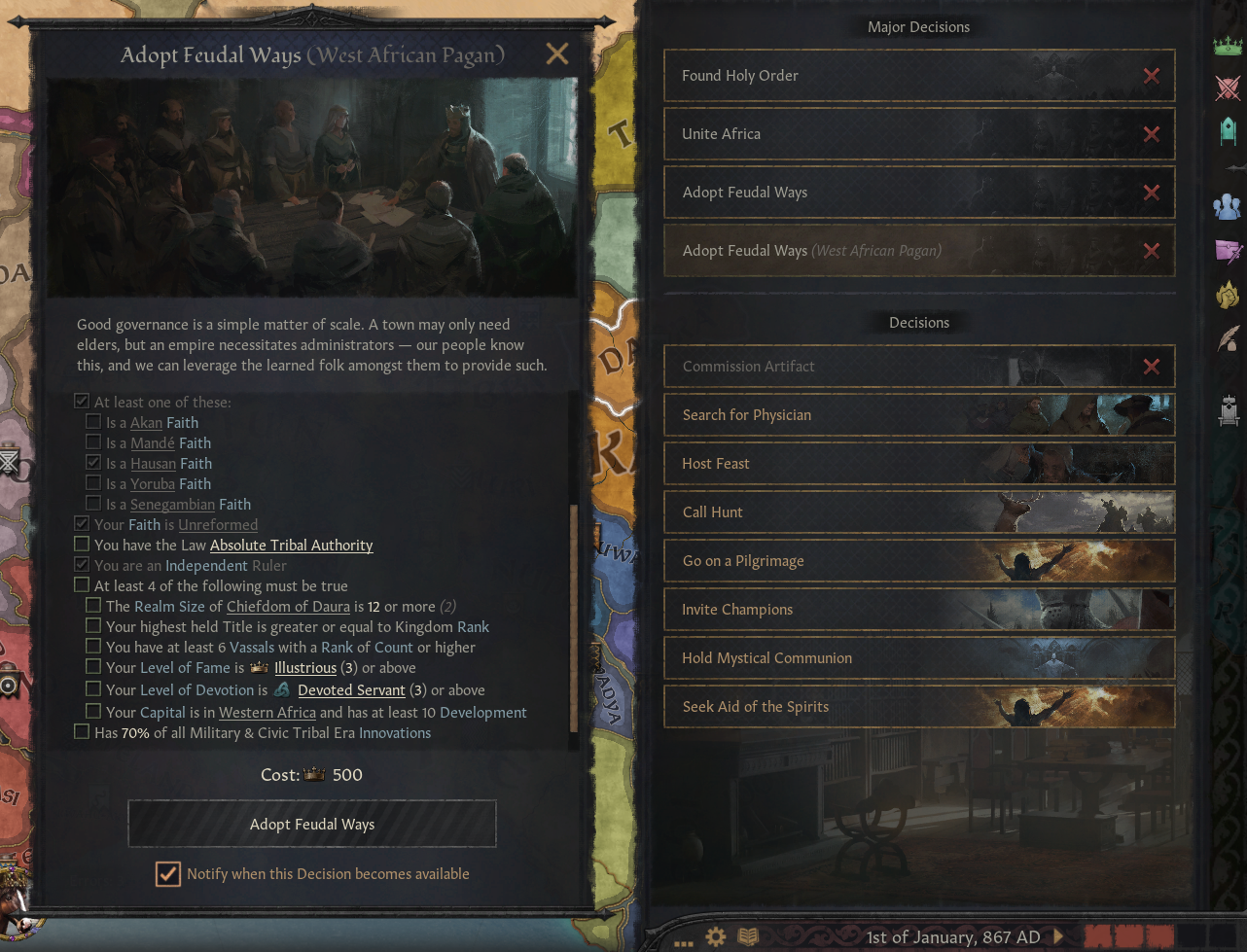 That's it for this time, cheers for now!

Any estimates, if there will be more struggles in the future?
Reactions:

rageair said:
We’re adjusting how feudalization works in the West African sphere, enabling rulers to transition out of the tribal government while retaining their native faiths without requiring them to reform those faiths.
Click to expand...

Excellent move!
Toggle signature
CK3 Suggestions:
I will sell my soul to get customizable forms of address in CK3
Reactions:

Are you going to add Megalithic holy sites, such as the Stonehenge, the Carnac Stones or the Almendres Cromlech?

Will reformed faiths be able to use the Megalithic builders as tenents, or perhaps use those places as holy sites?
Reactions:

Will you also give the Guanche their own character template? They supposedly looked different from anything in their immediate surroundings with lighter skin, hair and eye colour while also wearing close to nothing.
Toggle signature
Bug report: Finnish naming inconsistencies
Reactions:

Nice that Canary Islands are getting their own culture. Playing as a Baranis ruler in Spain it's kinda weird that in the 867 start your culture head is in the Canary Islands.

Doesn't seem like you'll have too much to fix this time around. Aside from the AVX issue the only major bug I'm seeing a lot of people report is that dissolution factions fire too often, especially in Muslim realms.
Toggle signature
Nations reel and stagger on their way; they make hideous mistakes; they commit frightful wrongs; they do great and beautiful things. And shall we not best guide humanity by telling the truth about all this, so far as the truth is ascertainable?-W.E.B. Du Bois.
Reactions:

Oh, and will the Guanche counts and duke rulers be Mencey and their counties Menceyato? Would be a nice touch.
Toggle signature
Bug report: Finnish naming inconsistencies
Reactions:

If I want to suggest the correction in the name of a location because there's a typo, does it count as a bug and should go to the bug forum?
Reactions:

If you allow me a suggestion, it would be very nice if the decision to unite the Spanish thrones was also available if you started in 867.

If it is year x, and you have the kingdoms of Castile (main kingdom), León, and Galicia, you should be able to make that decision by creating the Crown of Castile (the coat of arms would be that of Castile and León).

Any new content for iberian christians? DLC feels kind of barebones when it comes to them.
Reactions:
J

What about new succession types for W Africa (e.g. eldership)?
Toggle signature
Community Patch with Improved Genetics 2.0 and Other Mods
IC Fatimid Event Troops MFGA!
Pirate Traits for Tribals and Berbers
Pagan Ancestor and Sea King Bloodline Changes Makes special ancestor bloodlines more likely to get.
Easier Sainthood and Veneration Makes a character more likely to be sainted/venerated.
Warning: running both of these mods together can make pagan commanders OP.
Shieldmaidens Only Maimed If In Combat Shieldmaiden event only fires if the woman is leading a flank in an army the ruler is also leading a flank in
Warrior Lodge Hunting Dog Bloodline Fix
Feudal Can Join Lodges You can join or have children join lodges w/o quest. Also reduced membership requirements.
Pyramid of Giza Active for Everyone You no longer have to be lunatic or of a certain culture
Reactions:

Hopefully fixes, like when we invite someone to a feast they remain stuck at their own location and never show up at your feast. Also we cant edit saves anymore since the 1.6 update.
Reactions:
S

Any plans for making clan rulers have a toggle on your title that will either activate title name or dynasty name as realm name? just like clan iberian rulers have.
Reactions:

Somehow I want to spread this religion worldwide
Reactions:
U

I like the Picture of Big Mac attached
Reactions:

Any plan on revising the old achievements more reasonable? Like saga in stone and Lingua Franca? There are ways to keep them challenging while not just exhausting. (Like repeatedly doing the same stuff over and over again for REALLY LONG TIME)
Reactions:

Voy said:
Will you also give the Guanche their own character template? They supposedly looked different from anything in their immediate surroundings with lighter skin, hair and eye colour while also wearing close to nothing.
Click to expand...

, and a reconstruction of how they would look in the middle-ages

NarcomancerPL said:
Somehow I want to spread this religion worldwide
Click to expand...