Jump to latest Follow Reply
Menu
Install the app
You are using an out of date browser. It may not display this or other websites correctly.
You should upgrade or use an alternative browser.
Crusader Kings II 69584 Bug Reports 19689 User Modifications 10510 Suggestions 5929 Tech Support 6334 After Action Reports
Previous dev diary Next dev diary
Show only dev responses

We’ve shown you plenty of map changes already, including updates to Russia, Scandinavia, and most recently Italy and the Alps. But surely, we couldn’t do all of these wonderful updates without looking at the continent that deserves it the most, right?

So let’s have a look at Africa.

You read that right. Africa is finally getting the love and attention it deserves! Northern Africa and Mali have long needed an update. Where counties resembled squares and rectangles more than anything else. But no more!

Let’s start with the northern kingdoms. The kingdoms themselves remain the same. Only Mauretania has been renamed to Maghreb, and has along with the kingdom of Africa been placed in the Empire of Maghreb. Mainly to break down the very large Arabian Empire slightly. On the county level, every single county has been repainted in order to place them where they should be and give the borders a much more natural feeling. 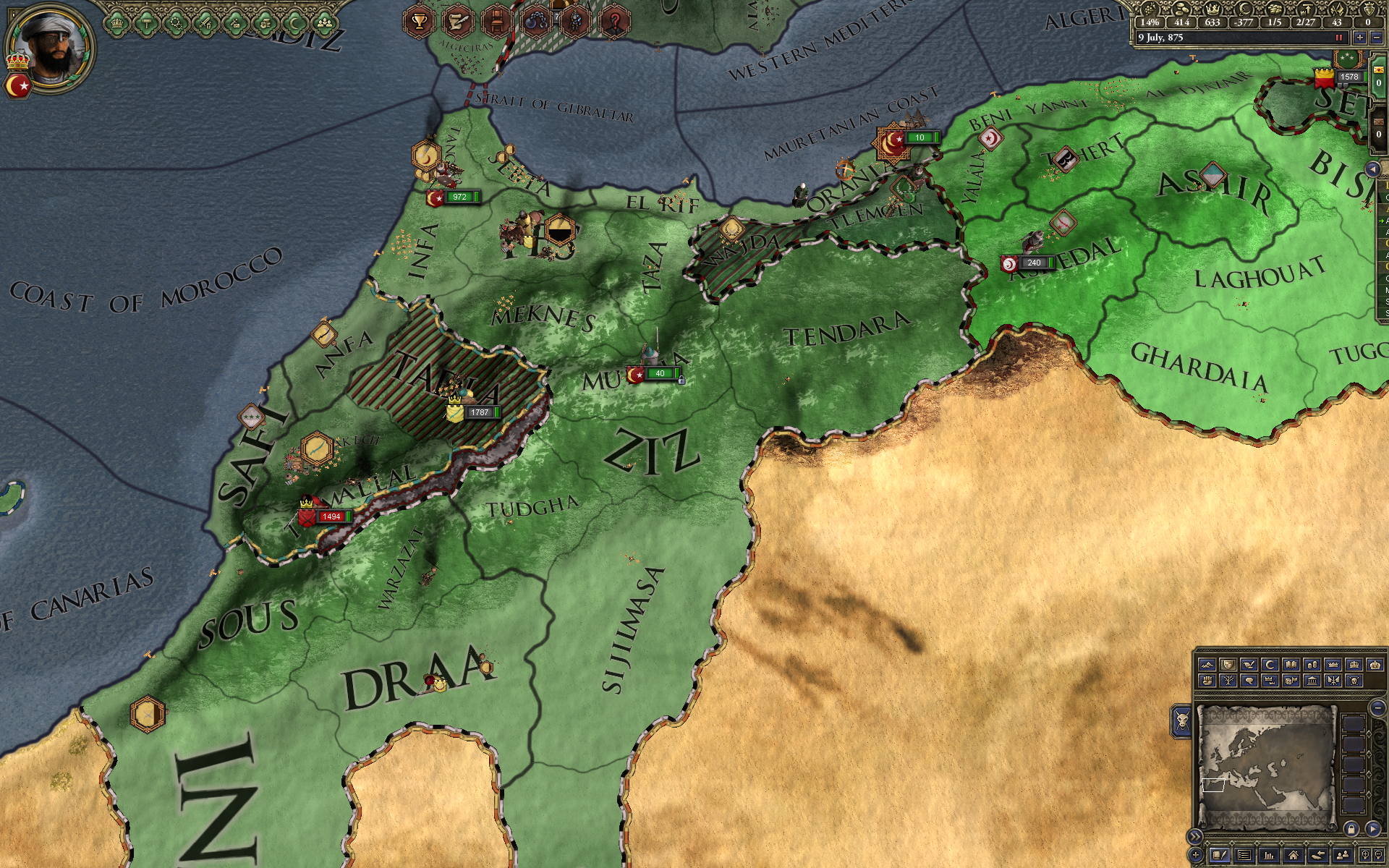 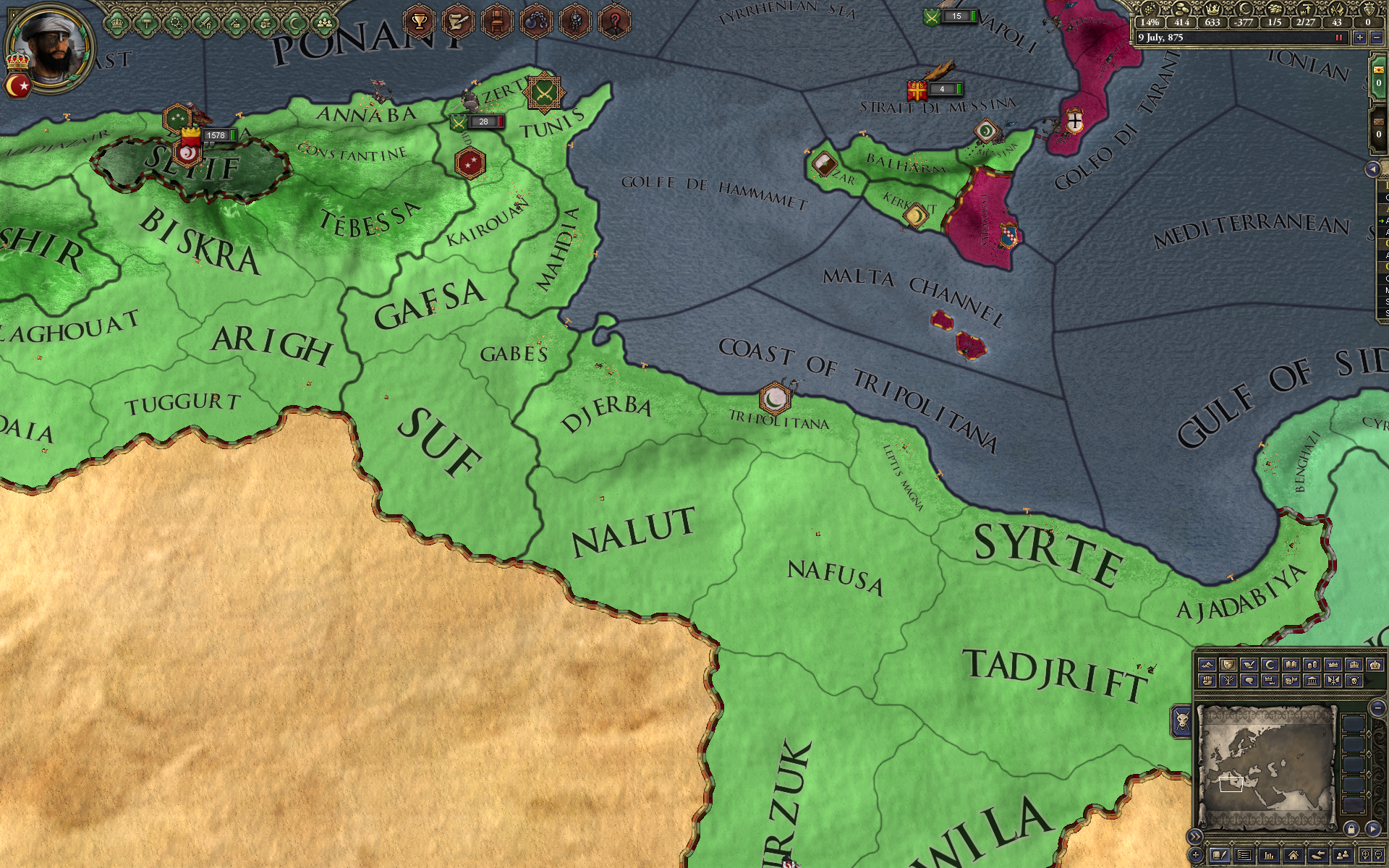 All in all, the new provinces and additional holding slots will make North Africa stronger than before. But to offer additional protection against aggressive Holy Wars from the major powers of Europe, we’ve increased the number of sea zones slightly in the mediterranean. The stronger realms of central Europe will now have to first conquer their way down to the coast of Iberia, Southern Italy, or go through Mallorca or Sardinia, before they will be able to reach the shores of Africa. This should give the realms in Africa some time before the Europeans attempt to make their way onto the continent.

As for Mali. The area has about twice the number of provinces compared to what they had before. This in turn allows for more than just the lonely kingdom of Mali to exist, which has been split into the three kingdoms of Ghana, Mali and Songhay. One kingdom for each of the major powers that inhabited the area during the timeframe of the game. They’ll all still be part of the empire of Mali, which is finally no longer the only empire with a single De Jure kingdom. 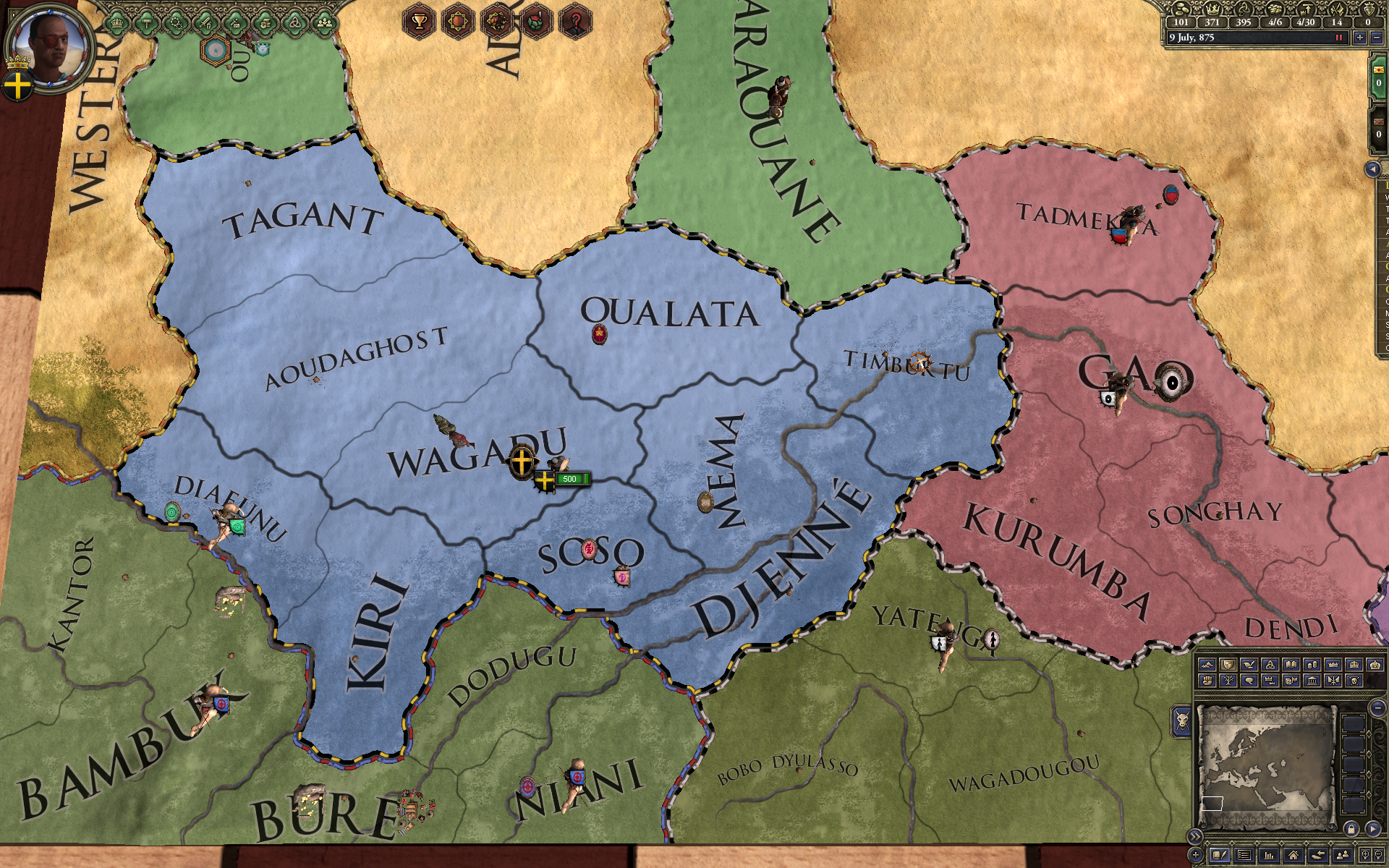 Here is an overview of the De Jure kingdoms: 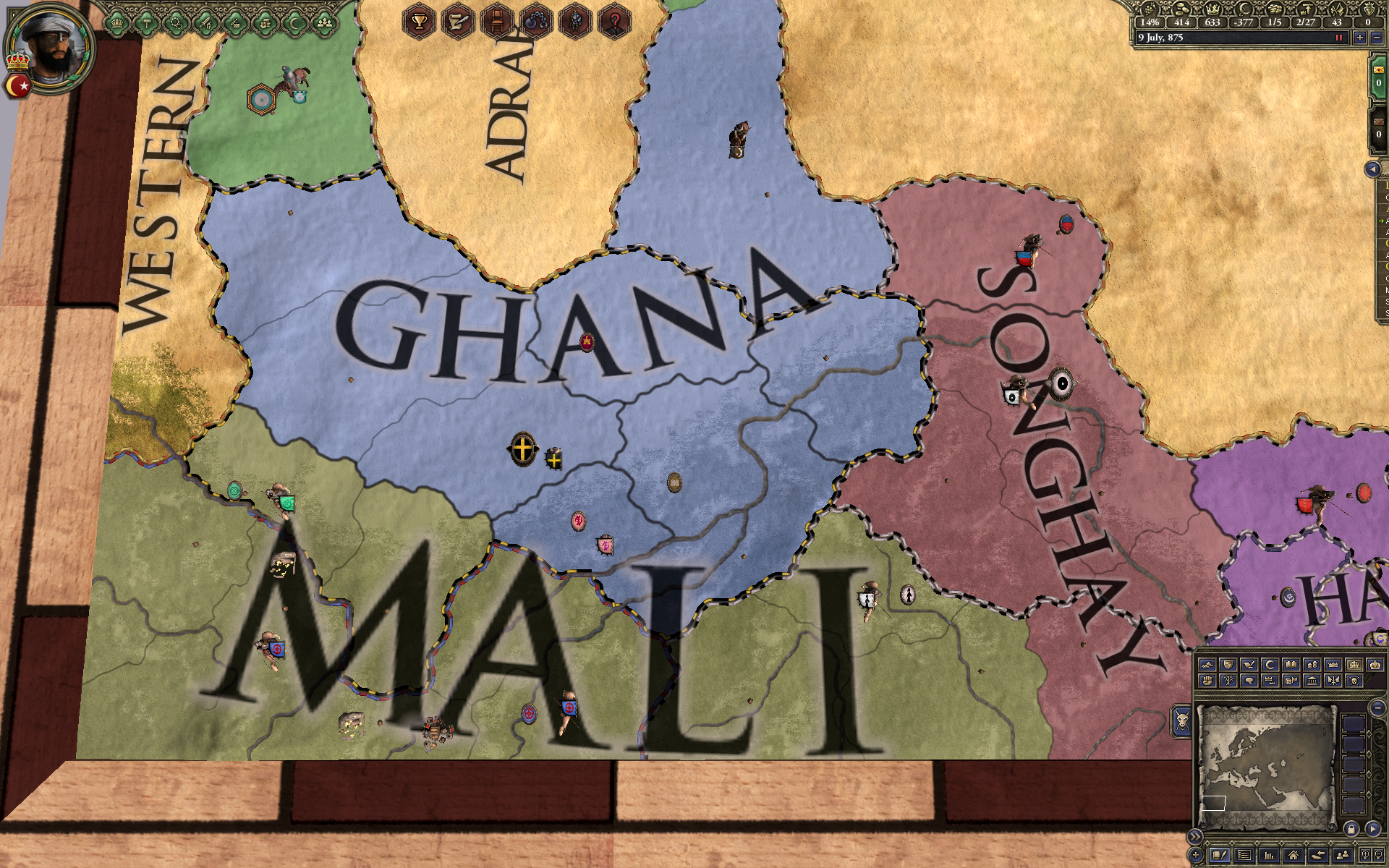 Updating the existing parts of the map is not the only thing we’ve done for Africa however. Kanem-Bornu and the region around lake Chad is now on the map as well! The area consists of the two kingdoms Hausaland and Kanem. These consist of three and four duchies respectively and together form the empire of Kanem-Bornu. So not only do we get new rulers and titles to play with, but it allows both east and west to move across the continent without always having to expand north and, usually, through a Muslim blob that more often than not forms in Northern Africa and Arabia. Instead, you’ll be able to cross Africa through Ghana/Mali in the west, through the Sahara and the Fezzan corridor in the center, and finally through Wadai and Abyssinia in the east. 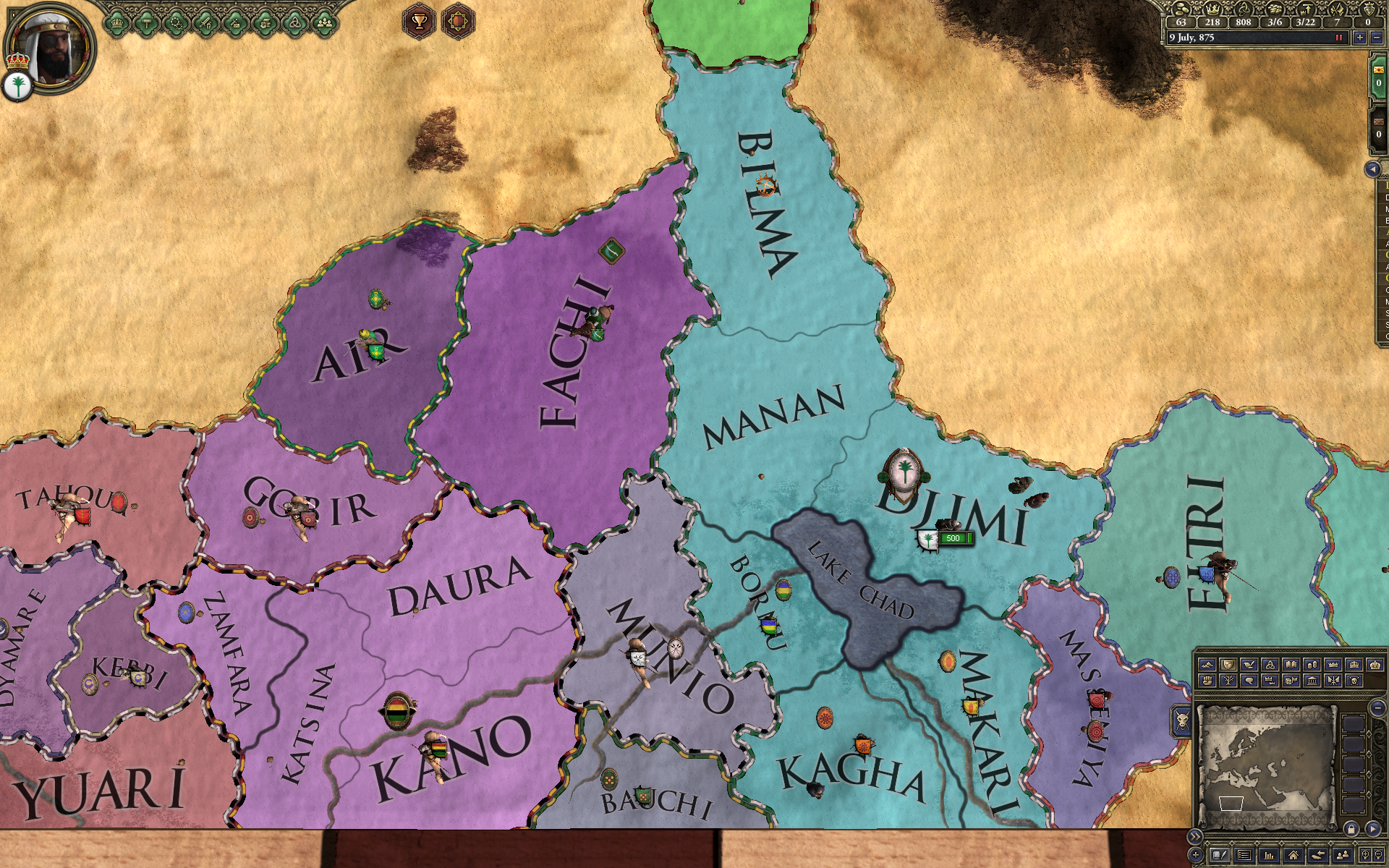 Let’s not stop there though.

To make Africa more distinct from other regions, a second trade route has been added to the game; the Trans-Saharan Trade Route. It requires either Horse Lords or Jade Dragon to be unlocked and functions very much like the updated Silk Road from 2.8. There is however, a certain twist to it. The base value of the trade route is very low. Granting next to no bonuses to the counties it passes through. What you need to do in order to benefit from it, is to control certain locations along the trade route and construct unique production buildings in established trade posts. To be clear though, these are merely special buildings within the trade posts just like you would upgrade a trade post on the Silk Road. These buildings represent some of the trade goods that historically had a large impact on the trade in the region. The most important of these will be the Gold Mines. 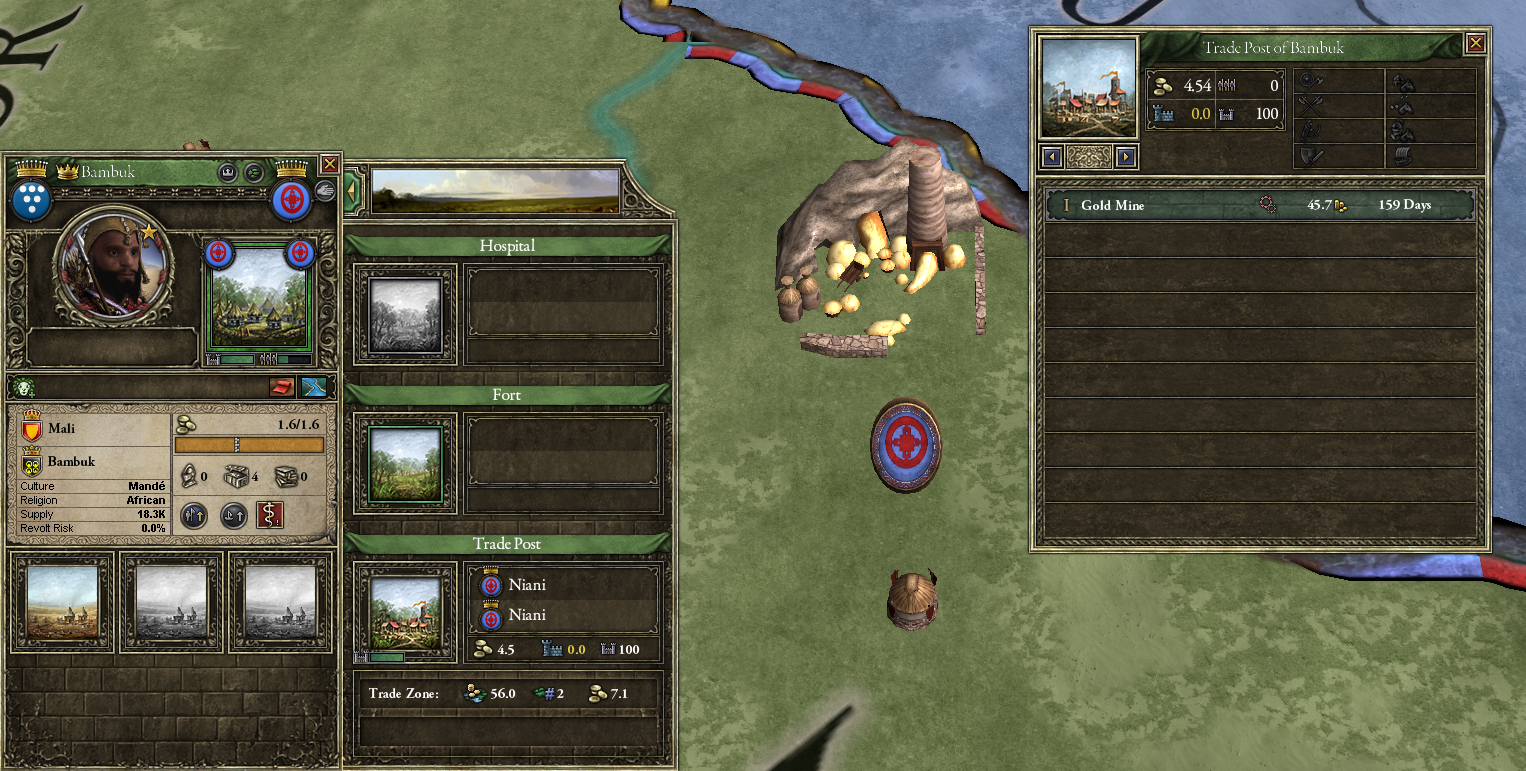 There are two Gold Mines located on the map, both of them in the kingdom of Mali. The Gold Mines will allow Mali to amass great wealth. Just like they did historically. If you would prefer to do it differently and take the mines from them, conquering Africa will very much be worth the effort. Not only will Gold Mines greatly increase the value of the Trans-Saharan trade, it will also grant the owner a large bonus to the county’s income. There will also be some flavour events that can trigger for anyone owning them.

Remember that what I’ve shown here is still a work in progress and things may be subject to change. Now, let’s wrap up the dev diary with some smaller additions.

We’ve renamed the West African religion to simply “African”, as to not exclude the newly added region around lake Chad, and updated the Patron Deities accordingly. The religion will also get a new set of shields for displaying the CoAs on the map.

I hope that you look forward to these changes and the overall improvements for Africa!
Last edited: Aug 10, 2018

Wow, I never actually expected Africa to get any attention. Awesome!

Most excellent
Toggle signature
To view is human, to comment is divine.
"Be not afraid" - John Paul II
"The Christian way has not been tried and found wanting, it has been found to be hard and left untried" - GK Chesterton.
Current AAR: The Thorn of the Rose HoI4 The Future of the Red Lion Stellaris (on hold) Journal of the Silver Daggers Battletech
Completed AAR: In Memory of France EU2 Pax Humanitas Stellaris 1.4.1 A VictoriAARn Education Victoria II 3.2
The Great Trial Stellaris 1.9.1A Game for Lisan: Belgium EU4 1.25 Account of RCAF Bomber Command HoI4
Other AAR: Entering the First Court - Kanem Bornu EU4 1.22
View my full AAR list at The Inkwell Red Special Cookie ●
This line is necessary since the forum re-work to enable the links in the last line to be used.

Thanks, sounds great! Any chance of hosting the pics on this server? They're not showing up for me due to Google being blocked in China (and no VPN)
Toggle signature
By God I have leaped over a Wall, by God I have run'd through a Troop, and by my God I will go through this death, and he will make it easie to me.​
-- Major-General Thomas Harrison, Fifth Monarchy man, unrepentant regicide, on the scaffold.​

This is really awesome.

@elvain will be VERY happy about this update.
Toggle signature
Small Mods:

Heck yeah! Now, please tell me that the African religion will get new fluff alongside the one that other pagan religions get and I'll explode with joy.
Toggle signature
Sit now there, and look out upon the lands where evil and despair shall come to those whom thou allied. Thou hast dared to mock me, and to question the power of France, master of the fates of Europe. Therefore with my explorers thou shalt see, and with my spies thou shalt hear; and never shall thou be released from vassalage until all is fulfilled unto its bitter end.

Great!
Toggle signature
Terra Universalis II
For EU IV
Another kind of whole world mod​
Magna Terra
For EU Rome VV
The way to be Imperator of all the Old World​
Umbra Spherae
For Crusader Kings II
Expand your faith and realm into all the Old World​

I haven't read it yet but I am so glad you did something with this!
Toggle signature
Baal: You can't be serious.
O'Neill: Yes I can... I just chose not to.

Elinarii said:
Sorry, but someone had to make that pun....
Click to expand...

I dispute this quite vehemently!
Toggle signature
By God I have leaped over a Wall, by God I have run'd through a Troop, and by my God I will go through this death, and he will make it easie to me.​
-- Major-General Thomas Harrison, Fifth Monarchy man, unrepentant regicide, on the scaffold.​

I can't wait for this patch/DLC

FifthMonarchy said:
Thanks, sounds great! Any chance of hosting the pics on this server? They're not showing up for me due to Google being blocked in China (and no VPN)
Click to expand...

My bad. Updated the screenshots now.

This is very nice, but when will we get the rest of Africa so that can be reworked?
Toggle signature
Twitter: Gruffa

Excellent, thanks! Showing up fine now and looking very good!
Toggle signature
By God I have leaped over a Wall, by God I have run'd through a Troop, and by my God I will go through this death, and he will make it easie to me.​
-- Major-General Thomas Harrison, Fifth Monarchy man, unrepentant regicide, on the scaffold.​

Yes, I love this! A mere hour ago, when commenting on someone else's thread about the need for an Africa expansion, I was thinking that bringing the trans-Sahara trade route into the game would be a good idea. But I didn't think it was likely to happen. I'm glad to see it is. And to see all these new territories in Africa. Excellent!

This new DLC is getting better all the time. I can't wait!

Nice! I like that the sea provinces around Sicily were updated to help with the holy war issues in the region.
Toggle signature
You must become king. Of everything. - From the Diagram, Tenets of Instruction, Back of the Footboard: paragraph 1

Amazing! This is so much more than I thought there will be!
Toggle signature
How to buy Victoria 3 with buckets of ducats (or: how much is Paradox worth in old golden coins).

Is there any chance we can see a map of the area between Kanem and Ethiopia, as well as a culture/religion map?
T