CK2 Dev Diary #89 - Mass Conversion, or how I learned to stop my Pagan ways and love God

Note that this is the last DevDiary before vacations start. Until they are over we will not post any diaries, or post them very sporadically. We will resume the normal schedule on the 10th of August.

Today we’d like to talk about Mass Conversion, the flip side of what we talked about in the last DD (Dynamic Pagan Reformation). While Reforming a Pagan faith is a very epic feat, it’s also a fairly hard one to pull off in many cases. Historically, pagan rulers often turned to their neighbours religions in order to solidify their rule - and now so can you!

It used to be quite a suicidal affair to convert to a non-Pagan religion as a Pagan ruler, your provinces would stay pagan and your vassals would often be upset with you and immediately start a faction to install a pagan claimant. With Holy Fury it’s much more reliable, and carries great benefits to both you and your people. Depending on your strength as a leader, and the respect you have from your subjects, you can now convince your realm to join you in a Mass Conversion. A Mass Conversion will see you, your subjects and your lands adopt a new religion - except for particularly rebellious subjects, of course. Note that only Tribal Pagans will have access to this mechanic.

To Mass Convert your realm you first need to find a so called ‘Sponsor’. You can either look for a sponsor manually, by looking at the interactions menu with landed independent characters, or you can access a list of anyone who would be willing to go through the trouble by clicking a new button in the religious interface: 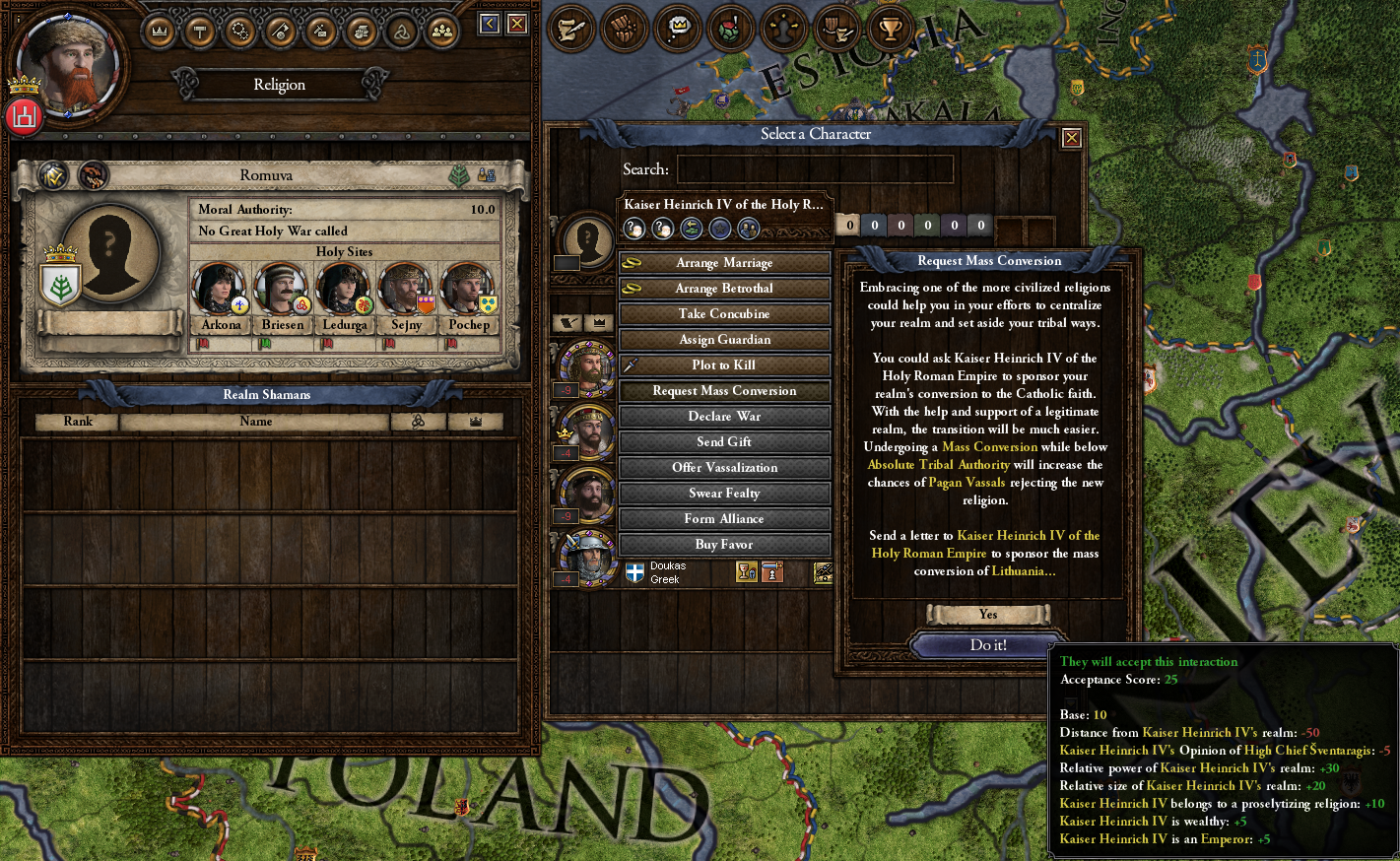 As said before, this list contains a list of everyone who will accept to convert your realm, and in the bottom right corner you can see that the AI reasoning is now exposed! The acceptance will not just be a bunch of pluses and minuses, instead you’ll be able to see exactly how they reason. If you, for example, want Byzantium to be your sponsor, you can enter the character sheet of the Basileus and check the interaction tooltip to see his reasoning if he says no, which will give you actual hints on what you could do to improve the chances of him accepting. 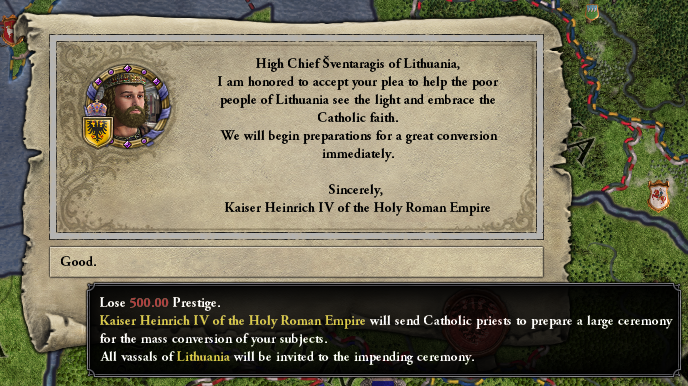 After you’ve found a sponsor that accepted your offer, the Mass Conversion events will begin! 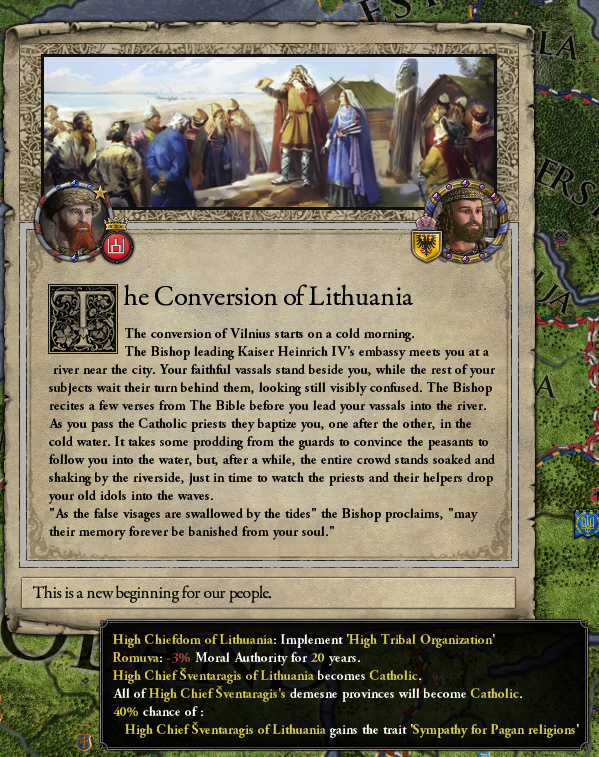 Note that the event image is a placeholder.

If you’re a tribe with low organization, you will actually gain a level of organization upon performing a Mass Conversion, in addition to you and your land switching to the new religion. The downside to doing one when you have low organization is, as mentioned earlier, that fewer subjects are likely to go along with it. 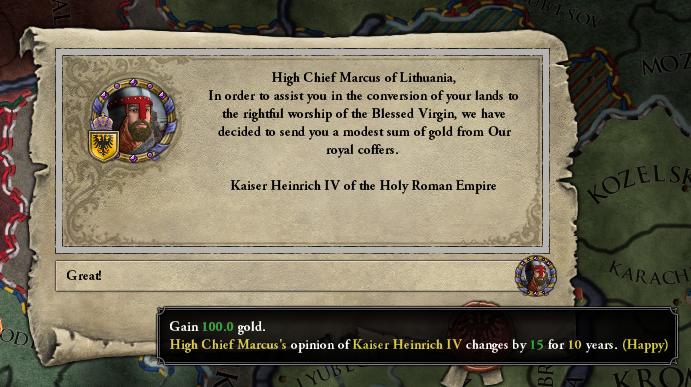 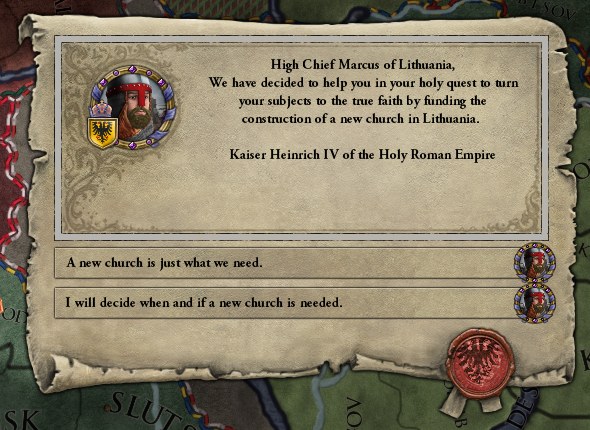 In addition, the priest that your sponsor will send you will also help you out. He will attempt to modernize your realm and ensure that you act in accordance to your new faith. For example: 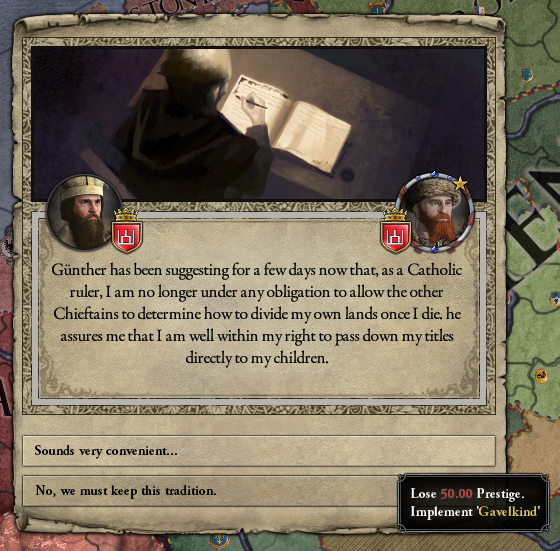 So, as you can clearly see, this system stands in stark contrast to the Dynamic Reformation we talked about in a previous Dev Diary - by reforming you gain absolute control of your future, but it’s a difficult path to walk that also require you to conquer vast territories. A Mass Conversion, on the other hand, is a fairly easy thing to accomplish that also comes with temporal benefits - but you’ll have to submit to a faith that might not represent you or the people you rule...

Odin is not pleased.

So we will be able to see byzantine contribution to the christianization of eastern europe. Can I marry sponsor's daughter?

rageair said:
Note that the event image is a placeholder.
Click to expand...

- Is there a chance for the Mass Conversion target (or their vassals) to slightly misinterpret the new faith and go heretic instead (or pick up a different Eastern religion, if the sponsor follows one of those)?
Toggle signature
You must become king. Of everything. - From the Diagram, Tenets of Instruction, Back of the Footboard: paragraph 1

I notice that Mass Conversion doesn't seem to specify that the conversion has to be to Catholicism.

So can Pagans mass convert to all 'standardized' faiths like Islam, Hinduism, and other Reformed Pagan faiths?

Can Nomads do this do? You stated that only TRIBAL pagans can do this but wouldn't it be a waste of immersion to exclude nomads. Just sayin'.

Wait, look at the first screenshot. Favor icon on the religious ruler tab? Is it new religious interaction?

- Is there a chance for the Mass Conversion target (or their vassals) to slightly misinterpret the new faith and go heretic instead (or pick up a different Eastern religion, if the sponsor follows one of those)?
Click to expand...

There have been some behavioral tweakings in AI logic. As for regular proselytization, if you receive a visit from a missionary while also fulfilling the conditions for a Mass Conversion and accept the missionary's request, the event chain will now result in a Mass Conversion, rather than just the ruler's and his family's conversion.

The AI acceptance score is being unlocked only for certain choices, not all diplomatic actions. Those places where it is exposed (such as Mass Conversion) can be modded and tweaked, yes.


WotanAnubis said:
I notice that Mass Conversion doesn't seem to specify that the conversion has to be to Catholicism.

So can Pagans mass convert to all 'standardized' faiths like Islam, Hinduism, and other Reformed Pagan faiths?
Click to expand...

What benefits if any does the nation helping you receive? Is it at all worthwile to help pagans convert as a non-pagan?
Toggle signature
Sit now there, and look out upon the lands where evil and despair shall come to those whom thou allied. Thou hast dared to mock me, and to question the power of France, master of the fates of Europe. Therefore with my explorers thou shalt see, and with my spies thou shalt hear; and never shall thou be released from vassalage until all is fulfilled unto its bitter end.

This is all great but why are only tribals allowed to use it? Reading through the dev diary the Mass conversion seemed to me exactly as what Boris I of Bulgaria did historically. Any chance to reconsider the prerequisites?

I like this. It should definitely be made far easier to mass convert to an established church than to "reform" and make an entirely new religion, for historical and practical reasons. I'd guess that making a reformed pagan religion is probably going to be the more popular option for players, though; it does look more interesting.

A great addition! More historical immersion! That's what I want from CK2.

Is it only available for pagans? What if I were not a pagan but my Moral Authority is low enough while theirs is high enough (even if they are reformed pagans)?
Last edited: Jun 29, 2018
Toggle signature
Ethnicity: Korean
Religion: N/A (Atheist)
Location: Macao
Ideology: Socialist (Internationalist, Anti-hegemony)
Issues: Free Trade, Interventionism, Atheism, Full Citizenship, Anti Military

1. Can I as Charlemagne or someone request to sponsor a pagan nations mass conversion?
2. Can the conversion process go awry, for example if the pagan ruler or the sponsor die? How would the process change?
3. Is the succession law change event something that pops up every time or is it random?
4. If my pagan liege requests the conversion, upon converting do I also gain access to the succession law change event?
5. Is it possible to seal the conversion by marriage?
6. Do you get canonised for sponsoring a mass conversion? Do you get canonised for requesting and successfully converting a country?
7. Can any rank ruler request it? Is there a realm size requirement?
8. Does the pagan faith need to be below a certain MA for you to request it?
9. Thanks
Toggle signature
CK3 Suggestions
Basic fixes · Final Disposition Doctrine · Sibling Marriage · Assyrian Religion · Promote Local Noble · Independence Faction Fix · Character History

Great!
Sorry if I post again:
could you give us the possibility to change the ruler's name once he/she converted?
Toggle signature
“I will set up my name in the place where the names of famous men are written, and where no man’s name is written yet I will raise a monument to the gods.”

Is there a bad side like a religious unrest modifier for the incredibly convenient immediate conversion of your demesne?

SargonAkkad said:
Great!
Sorry if I post again:
could you give us the possibility to change the ruler's name once he/she converted?
Click to expand...

Seconded. It would be weird to see a king of sweden, the pious christian who converted his people, named after Thor. Its not even ahistorical. Pope John II was born Mercury but believing it was inappropriate for a Pope to be named after a pagan god, rechristened himself to John II
Toggle signature
CK3 Suggestions
Basic fixes · Final Disposition Doctrine · Sibling Marriage · Assyrian Religion · Promote Local Noble · Independence Faction Fix · Character History