Jump to latest Follow Reply
Menu
Install the app
You are using an out of date browser. It may not display this or other websites correctly.
You should upgrade or use an alternative browser.
Crusader Kings II 69632 Bug Reports 19693 User Modifications 10528 Suggestions 5969 Tech Support 6340 After Action Reports
Previous dev diary Next dev diary
Show only dev responses

Today I’ll cover a minor feature of the upcoming Holy Fury expansion, the ‘Kill List’. The Kill List is, simply put, a list of everyone a character has killed and how they died. The list is accessed from a button in the character interface, in our example here we have a typical incarnation of Genghis Khan: 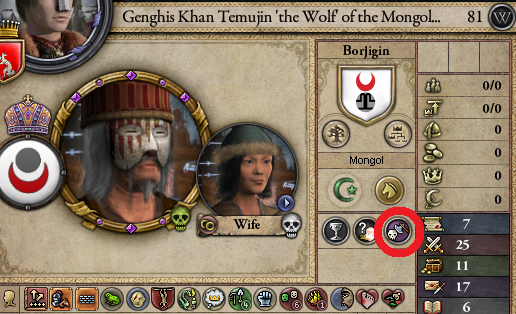 This button is visible on all characters, living or dead, and shows a list of all kills that are public knowledge (so you can’t see any secret kills a character might have). The list itself will open to the right of the character interface, and looks like this: 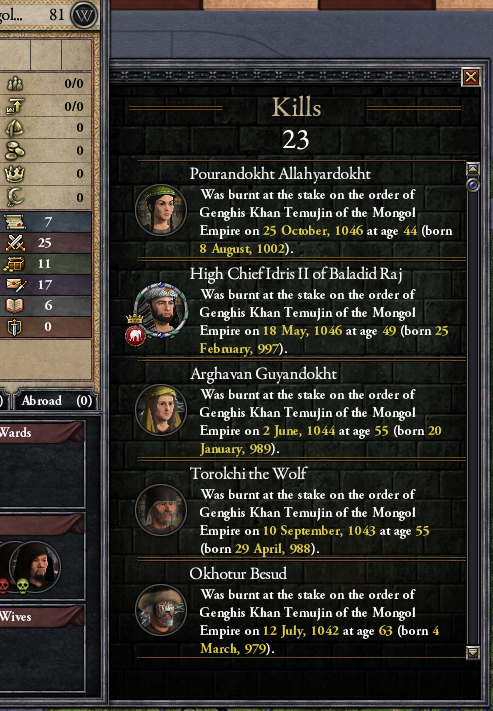 Now, while there aren’t many actual gameplay effects tied to this feature (save a few events) you might still feel inclined to become a murderous tyrant. If you so happen to kill more than 5 other characters, you will enter the Ledger - where the most depraved killers are listed at the top. For some reason, characters with a Reformed Pagan religion using the Bloodthirsty Gods doctrine tend to top the lists... more on that in the next Dev Diary! 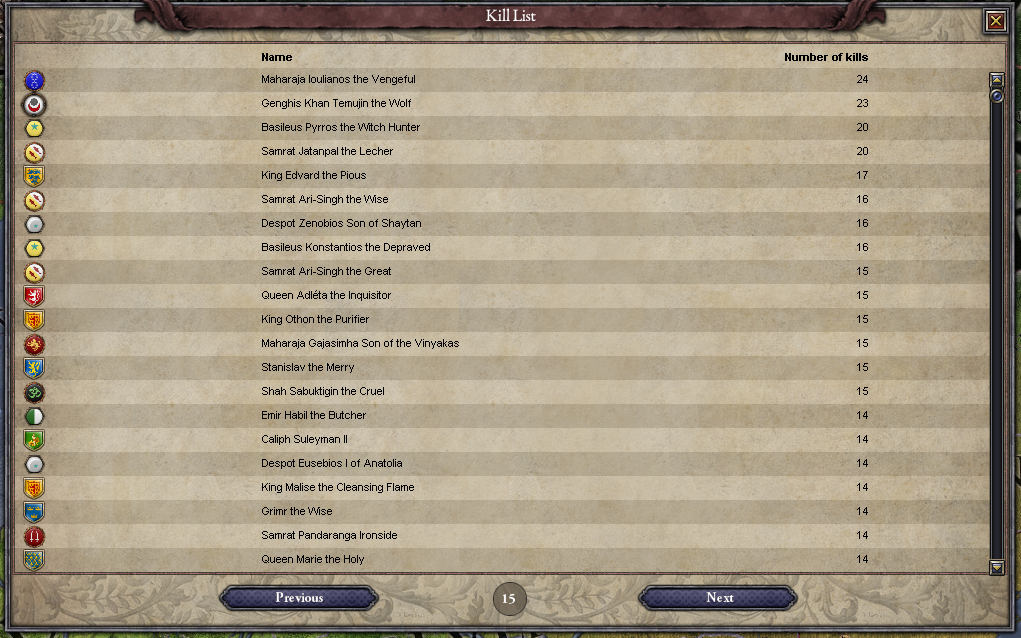 Kinda boring.
Toggle signature
Fall in love with a infidel? Check out Interfaith Marriage, a CKII mod allows you cross the religious border.

Kinda disappointed we're not getting anything meaty. This expansion must be about 4 months away.
C Toggle signature
Check out my WIP mod Europa Magnifica, which will add thousands of new provinces and rulers: https://discord.gg/AesYGmSpqZ

Nice feature, I really like the idea! I especially like the ledger. Might be a short dev diary but I’ve always appreciated a little glimpse at something rather than no glimps at it! Looking forward to the full release.

Cool, a small unexpected, but welcome addition. Unexpected for me at least. This should be fun for comparing pen- kill list size with friends. Will there be a kill list secret kills included for your own character?

A fine feature. Is the kill list in the ledger a list of characters currently alive or also of characters long dead? Does a character need to be a ruler to make the list?
M

What's the frog trait?
Toggle signature
Sit now there, and look out upon the lands where evil and despair shall come to those whom thou allied. Thou hast dared to mock me, and to question the power of France, master of the fates of Europe. Therefore with my explorers thou shalt see, and with my spies thou shalt hear; and never shall thou be released from vassalage until all is fulfilled unto its bitter end.

The non-congenital variety of ugly if I'm not mistaken.

I can confirm from the stream that it is because the French culture is very glitchy regarding warfare. Because it cannot be fixed, they have decided to replace the entire culture with a congenital trait.
Toggle signature
CK3 Mod: Sunset Invasion
GEDCOM to CK3 conversion tool

For the paranormal cult part of the game, can there be a way to find out who killed who via some ritual?

All characters of French culture should have the frog trait.

This is probably nothing but..

I see there is a Caliph Suleyman II in the Kill List, with 14 confirmed kills - but his title is down as the Kingdom of Andalusia, which is not one currently associated with Caliphs ingame.

Historically the Umayyad rulers of Islamic Spain styled themselves as "Caliph" at different points, despite not being the de facto Sunni religious leader. I wonder if this is being implemented, or (more likely) this is a coincidence simply due to how this particular game played out.

Edit: Yeah it's almost certainly nothing. In this game, Genghis Khan has a pet frog and was around 200 years early!

The frog trait is from the Frog Prince event chain, where your character is turned into a frog by a witch (+100 to intrigue, -10 to all other traits) as punishment for marrying for powergaming rather than roleplaying purposes. Must find a princess (NOT some lowborn wench with good or excellent traits) to marry in order to be turned back.

Keizer Harm said:
I can confirm from the stream that it is because the French culture is very glitchy regarding warfare. Because it cannot be fixed, they have decided to replace the entire culture with a congenital trait.
Click to expand...

"Our resident planetologist, Elton John, has warned that "Mars ain't no kind of place to raise your kids; in fact it's cold as hell," during his lecture on aerospace engineering."
--Pte Baldrick