Jump to latest Follow Reply
Menu
Install the app
You are using an out of date browser. It may not display this or other websites correctly.
You should upgrade or use an alternative browser.
Crusader Kings II 69466 Bug Reports 19673 User Modifications 10465 Suggestions 5868 Tech Support 6318 After Action Reports
Previous dev diary Next dev diary
Show only dev responses
Greetings!

Today I’d like to present a feature that is specifically tailored towards the ones among you who truly enjoy breeding potent dynasties - Legendary Bloodlines!

Legendary Bloodlines are modifiers that are passed down the generations from one specific character, the Founder - they work much like a dynasty, but with several more rules and caveats. They symbolize the widespread renown a certain character might have, and the staying power stories surrounding their feats are. Having a Legendary Bloodline in your character will convey a bonus based on who founded it, and there are many different Bloodlines to be found (and Founded). Bloodlines are accessed from the Character View: 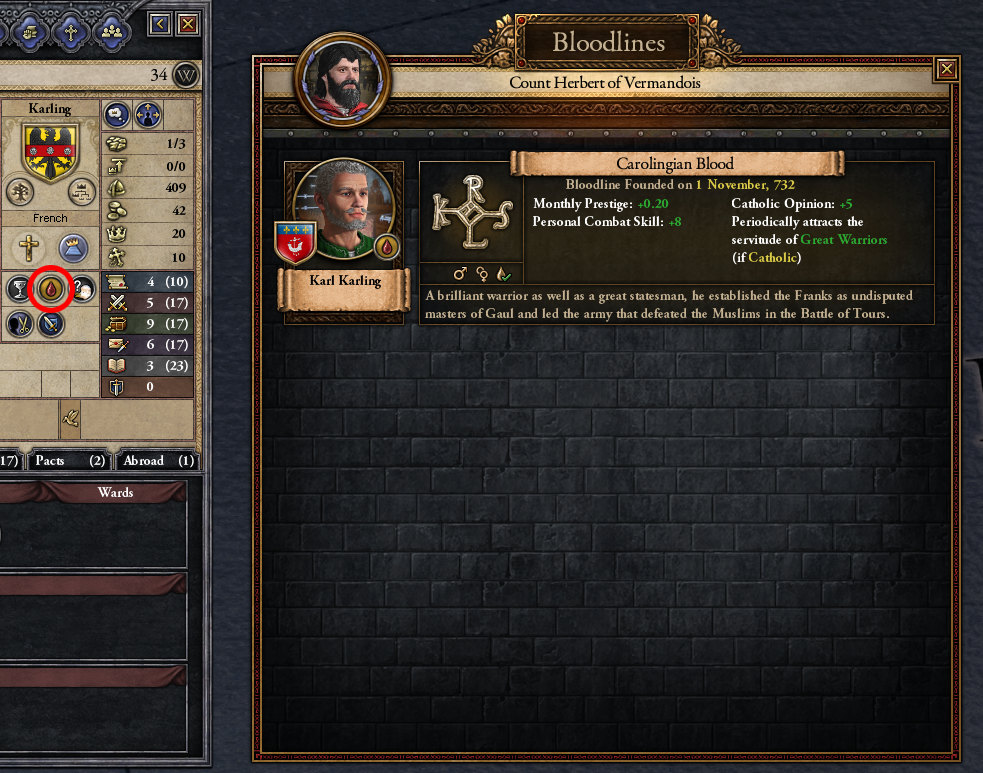 Unlike traits such as Genius or Strong, Bloodlines are not genetical - Bloodlines gain their power from perception and belief; if you were a superstitious medieval warrior, would you rather fight the big burly fighter who you knew were related to Charles the Hammer, or the one you knew were not?

That very same superstition, combined with the prejudices that were common in those times, causes Bloodlines to be either Agnatic or Enatic - to breed Bloodlines into your dynasty will require you to get clever, and plan ahead if you want more than one line to run within your direct line of heirs. If a Bloodline is agnatic, for example, a man will still pass it to his daughters - but they will not pass it on to their children, that will be exclusively reserved for his sons.

It's also worth noting that Bloodlines do not give direct stat boosts like how artifacts do.

To facilitate the merging of several different Bloodlines into one direct line of characters, we’ve made it so that Matrilineal marriages transfer bloodlines that the parents wouldn’t normally be able to transfer - symbolizing that it’s less explicitly about gender, and more about who’s the dominant part in a marriage.

To see who’s a part of any given bloodline, you can view a list of the current holders by clicking a button next to the Founder in the Bloodlines View: 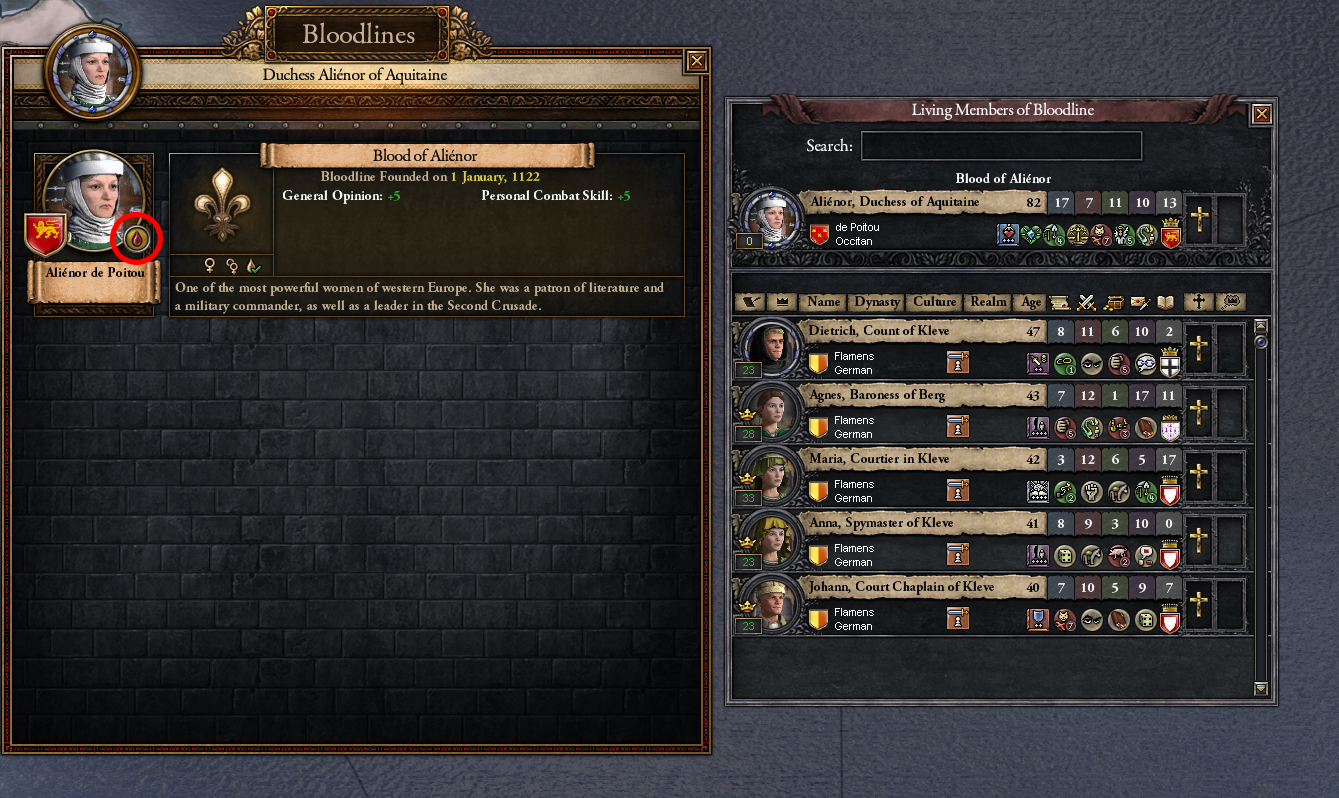 Though the easiest way by far is to enter the Bloodlines Ledger Page to see which bloodlines exist, how many members there are and, by clicking the entries, view who holds them. 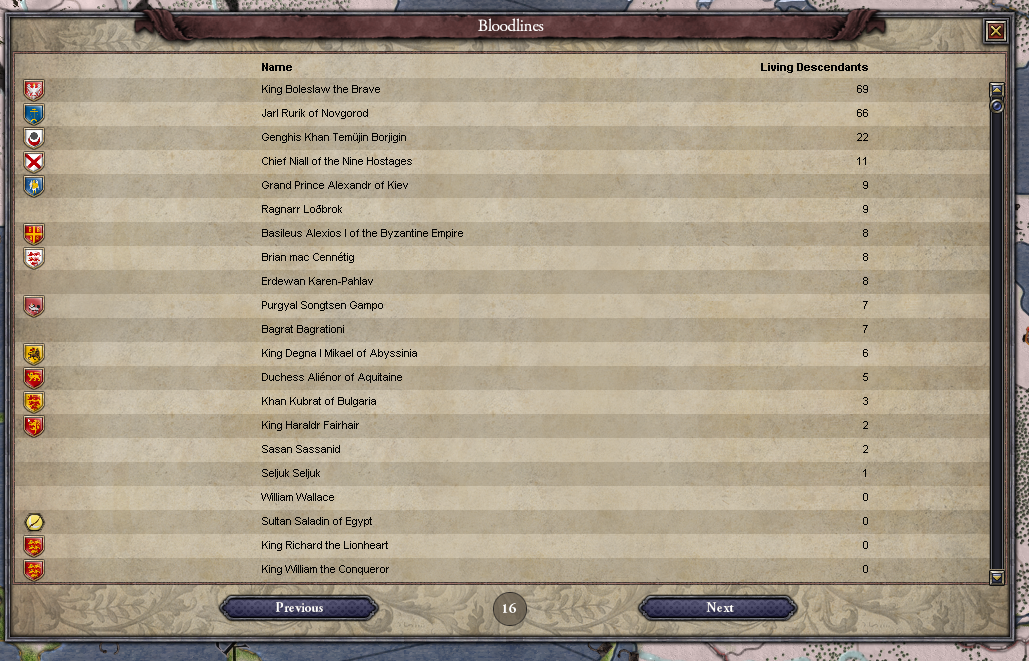 Bloodlines stem from many different sources, but the ones I’ll touch upon today are the Historical Bloodlines. As you might have already figured out, certain famous historical characters start with bloodlines, or found them at a certain point in their life. For example, if William succeeds in his invasion of England he’ll found a bloodline. As bloodlines come and go, you’ll have a different setup depending on what bookmark you choose to start in. Here’s a few examples of bloodlines you can expect to want to breed into your own line:

Note that there will be ways to get bloodlines apart from breeding them into your dynasty, but that will be the subject of a future DevDiary.
Click to expand...

Why do they increase combat skill?

How about bloodlines that are lost, will we be able to claim to be descendants of people that we clearly are not but no one can prove we are not, say the Blood of Plotmaios, Alexander, Caesar, or even Cyrus (I mentioned these since the son of Caesar and Cleopatra was supposedly descended from all these).
Or Ashoka for the indians.

Oh not related to fake ones but will the blood of El'Cid be one of these?


Kuzma Minin said:
Why do they increase combat skill?
Click to expand...

Why does a sword make you a better general? Bonuses in ck2 never made sense.


rageair said:
It's also worth noting that Bloodlines do not give direct stat boosts like how artifacts do.
Click to expand...

It really ought to be the other way around, weapons, jewelry, and armour can't make you abetter general or steward, but people's perception that you come from a line famous for this can.
Last edited: Jun 1, 2018
Toggle signature
Baal: You can't be serious.
O'Neill: Yes I can... I just chose not to.

Can we choose the bonuses for founded bloodlines, or will only the historical/scripted ones have those cool bonuses (enabling Tanistry succession etc)?

At first glance this is fun, but there are too many modifiers in the game.

looks great. also has mod potential (?) and later mechanic potential for cadet dynasties, i would think

Can we get a list of the historical bloodlines?
Toggle signature
Culture: Moravian Czech
Religion: Atheist
Traits: Lunatic, Greedy, Slothful, Proud, Cynical, Paranoid, Suspected Demon Spawn
“I am king of the Romans, and above grammar.”
― Sigismund, Holy Roman Emperor
The things I argue for are not necessarily my own opinion, but rather a different perspective.

Notice the new French portrait there also... BRIAN BORU! YAY! Now you just need to put him into the title history as high king... Also with Nial of the nine hostages, the Scots didn't exist when he was around, they were the Picts.

psychological perception of your foe

Nothing to see there.
Toggle signature
~ Magne Skjæran - Crusader Kings 3 programmer
Follow me on Twitter for out of context quotes from Paradox

Will there be mythical bloodlines? "Descended from the Gods" for Ynglings or some such?
Do Bloodlines stack?
Are they culture dependent?
Can my character found a bloodline and then his grandson also found one if both have enough achievements? Or does one dynasty get only one bloodline?
Toggle signature
CK3 Suggestions
Basic fixes · Final Disposition Doctrine · Sibling Marriage · Assyrian Religion · Promote Local Noble · Independence Faction Fix · Character History

Psychological impact. They're making your opponent worse, not you better.

Would you want to fight the direct descendant of Ragnar Lodbrok in single combat?
Toggle signature
~ Magne Skjæran - Crusader Kings 3 programmer
Follow me on Twitter for out of context quotes from Paradox

Finally, the ultimate tool we needed for the good breeding simulator!

However, I would say we are getting too many opinion bonus, things like artifacts, bloodlines,... will add one another and that will make factioning even harder than it already is. Or if you want more bonus, then perhaps you should consider adding malus.
Toggle signature
"BOUNDARY, n. In political geography, an imaginary line between two nations, separating the imaginary rights of one from the imaginary rights of the other."

As I mentioned in the Diary itself, it's because a superstitious medieval warrior would be more intimidated fighting someone they know was related to a great hero than someone who was not. Note that the Personal Combat Skill values have been heavily revised in HF, 5 skill is very low - but it can give you that edge you need. More on this in a future DevDiary!

Interesting! As well as the UI screen!

Awesome!! So having a bloodline can enable features, like succession laws that you otherwise might not have?!! You know, because that’s they way the defendants of so-and-so always settled their disputes!!

Meneth said:
Psychological impact. They're making your opponent worse, not you better.

Would you want to fight the direct descendant of Ragnar Lodbrok in single combat?
Click to expand...

rageair said:
As I mentioned in the Diary itself, it's because a superstitious medieval warrior would be more intimidated fighting someone they know was related to a great hero than someone who was not. Note that the Personal Combat Skill values have been heavily revised in HF, 5 skill is very low - but it can give you that edge you need. More on this in a future DevDiary!
Click to expand...