Jump to latest Follow Reply
Menu
Install the app
You are using an out of date browser. It may not display this or other websites correctly.
You should upgrade or use an alternative browser.
Crusader Kings II 69419 Bug Reports 19654 User Modifications 10447 Suggestions 5857 Tech Support 6310 After Action Reports
Previous dev diary Next dev diary
Show only dev responses

PDXCon is soon upon us, and we hope to see you there! During the event we will reveal the name and theme of the Expansion we’re working on, and after PDXCon is over we’ll have plenty of Dev Diaries that will delve deep into the new expansion features. For now though we’d like to present the main feature of the free patch that’ll accompany the Expansion!

It is time to don your armor and ready your steed, as the Vicar of Christ himself has declared that all who join in expelling the infidel from the Holy Land will have their sins absolved!

The Crusades are a very iconic part of the game, though one that has barely seen any change since the game was released 6 years ago. A lot of fantastic and interesting systems have been added to the game over the years, and we wanted this very central feature to feel as deep and interesting as any one of them.

The Catholic faith will no longer use the old Great Holy War system - instead they will use a new and improved system specifically tailored to both increase immersion and enhance the gameplay surrounding the crusades. This system is massive, and it might be hard for us to fit all of the information into this single DD, but we’ll give it our best shot!

We have specifically aimed to fix the issue where, unless you intend to win the crusade, there was no real reason for you as a player to participate except to get the ‘Crusader’ trait.

To accomplish this we’ve made Catholic crusades work in two phases; first there is a Preparation Phase, followed by the actual war. To communicate this properly we needed a new dedicated interface. Enter, the Crusade View: 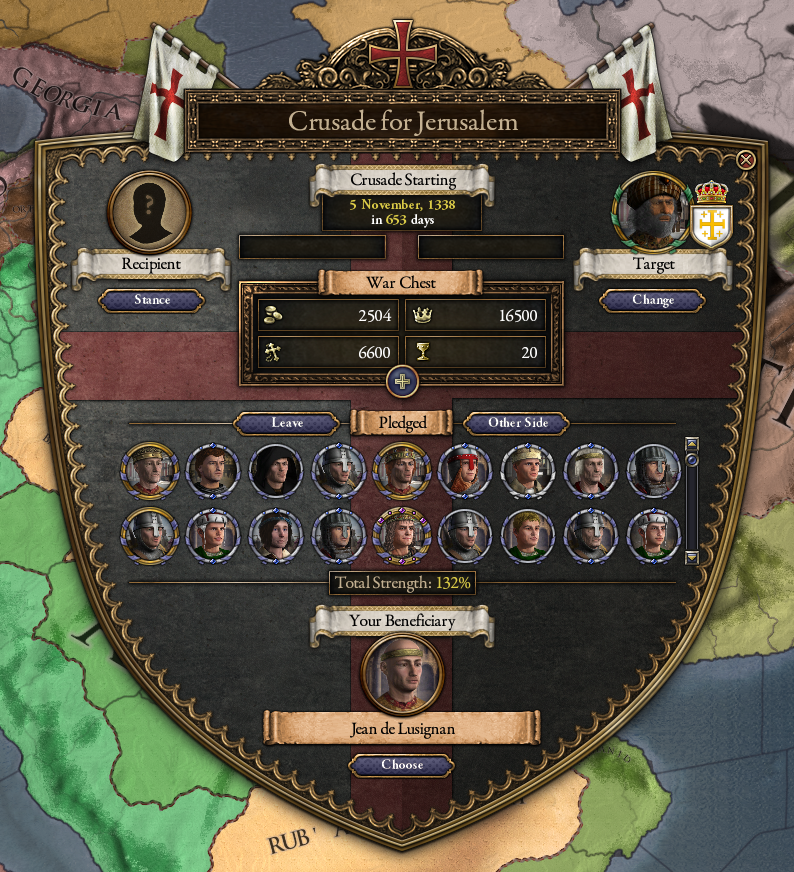 Holy shield, on the wall, which is the holiest city of them all?

When the pope decides that it's time for a new Crusade, he will send a call to the Catholic world for support. When he does you can access the Crusade View by clicking the Crusade Banner underneath your portrait.

In the Crusade View you will have access to a plethora of useful information, and you’ll be able to take actions to help the crusade or to alter its course. You will be able to see the Pope’s proposed recipient (if any) in the top left corner, and the target character and title in the top right. There will be a timer counting down to the date where the war will start. During this time, the following can be done:

If a Catholic ruler chooses to neither pledge to the crusade or donate money to the War Chest, the Pope might get very upset with them. Depending on the rulers tier and influence, this can range from a simple piety hit to an outright excommunication. Revoking your pledge also carries a similar penalty.

Regarding the War Chest - when the preparation phase is over, 20% of the money in the War Chest will be divided between the pledged Crusaders, in order to provide for their levies and fleets as they go to war. The rest is saved until the end of the Crusade, where it is used as rewards for the participants and to set up the Crusader Kingdom. The Crusader Kingdom will receive 10% of the War Chest in order to steel them against imminent counterattacks. The rest (including prestige, piety and artifacts) is given out to the Crusaders who participated in the crusade, in order to motivate you as the player to participate as much as you can - even if you don’t expect to win. To ensure that the top contributors don't take all of the War Chest rewards, any one participant can receive at most 20% of it. As the Catholic world tends to be rather… generous with their donations, this often translates into a lot of wealth! Beware though, if the crusade is lost the majority of the contents of the War Chest will be lost, and Christendom will be weaker for it...

When the Preparation Phase is over, the war begins and the Crusade View changes: 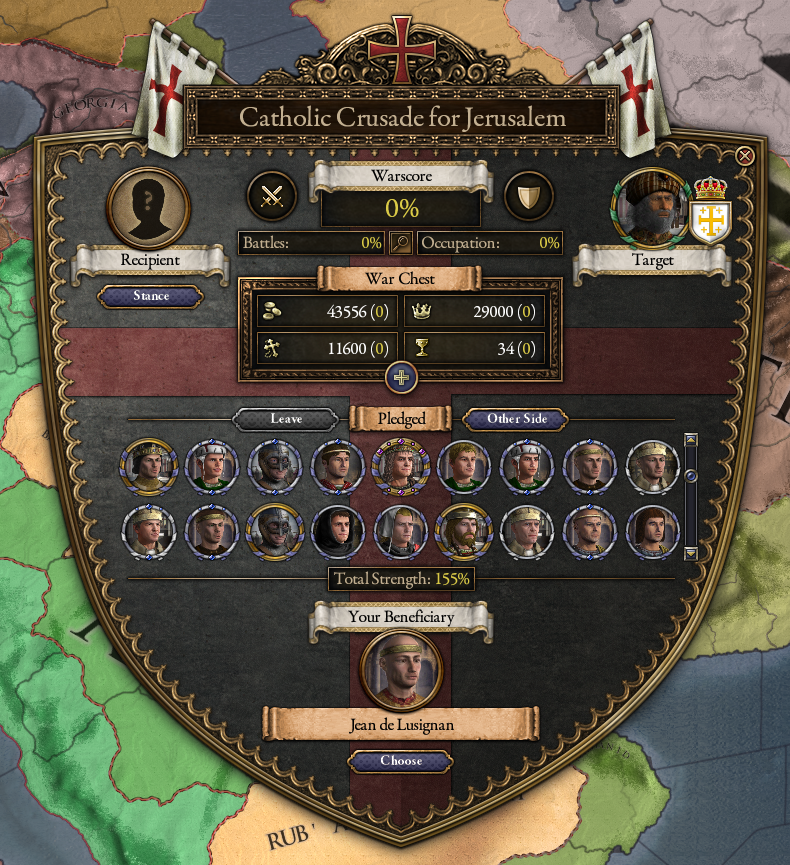 Note that the numbers are still WIP.

The Countdown Timer is replaced by the warscore and the name of the Crusade is updated, otherwise the functionality remains the same (except for being able to change the target, of course, at this point it’s too late for that).

If the Crusade is successful, what will happen depends on the top contributor’s stance. There are three stances; ‘Selfish’, ‘For my Beneficiary’ and ‘Comply with Papal Demands’. The AI will always choose to go with Papal Demands.

In the old system, the title and all under it went to the winner of the crusade. You often saw France or the HRE own for example Jerusalem, which in all honesty was very boring, and more often than not only resulted in an inheritance mess. While a player can still choose to use the old system by choosing the ‘Selfish’ stance, the new default behaviour is completely different. Unless the Pope wishes to restore an existing King or Claimant (where the normal, old, behaviour will be used) a Crusader Kingdom will be set up: 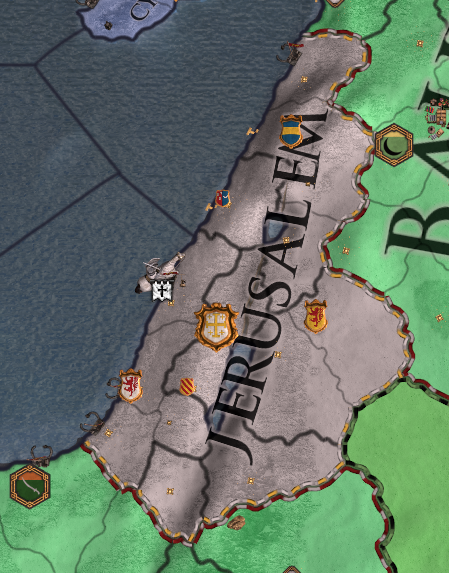 A Crusader Kingdom is a multicultural kingdom made up of the beneficiaries of all participants. The top contributing participants will have their beneficiaries get higher titles in the target kingdom. To avoid the player gaming the system using inheritance, the Kingdom is always set up to disallow external inheritance - and the AI tends to choose beneficiaries that do not stand to inherit or are married to someone who might inherit.

If your beneficiary receives land in a Crusader Kingdom, your entire Dynasty will receive a monthly boon to piety until their death. In a future Dev Diary we will go into more detail regarding the importance of Piety in the Catholic sphere, but rest assured that it’s going to be more important to be seen as pious than it’s ever been before - making the boon from your beneficiary rather significant.

The new ruler of the Crusader State, in order to properly rule such a challenging realm, gets a trait appropriately named ‘Crusader King/Queen’ which confers a massive same religion opinion along with some other goodies.

And, for the finale, if your beneficiary is selected to be the King or Queen of the Kingdom - you have the option of switching over to them, taking control of the newly established Crusader Kingdom and leaving your old character behind (which is also part of the reason why you can only choose members of your own dynasty as beneficiaries). We believe that doing a thing such as this will provide the quintessential CK2 experience, where you have to both manage unruly vassals and defend against vengeful religious foes!

Stay tuned for future Dev Diaries, where we might go into detail on a few… special crusades.

Going back to the basics. This is really good.

Looks like the start of a beautiful revival. If this becomes the last expansion, then it is a dignified return to glory indeed.
Last edited by a moderator: May 14, 2018

Thure said:
Wait... this is a FREE patch feature?! Awesome!
Click to expand...

Yes, we felt that some refinements on the feature were a bit overdue. The old system never managed to properly capture the political landscape we wanted for our simulation of the Crusader States. We hope that this rework will make it more engaging and fun to play with for everyone involved.


rageair said:
Stay tuned for future Dev Diaries, where we might go into detail on a few… special crusades.
Click to expand...

This is aweseome, especially the feature to switch over to the new Crusader King/Queen. Finally the name of the game makes sense!
C

Yaay! This is all I ever wanted!
Toggle signature
Nationality: Croat
Religion: Roman Catholicism
Ideology: Rightist
Last Megacampaign: CK2 -> EU4 -> Vic2 - Crusader Panonians
Last EU4 playthroughs: France, Commonwealth
GENERATION 40: The first time you see this, copy it into your sig on any forum and add 1 to the generation. Social experiment.
D

This is fantastic, you have resolved any issue I have had with Jade Dragon and any other DLC with this. This is glorious

rageair said:
Stay tuned for future Dev Diaries, where we might go into detail on a few… special crusades.
Click to expand...

Great new mechanics and far closer to how the real crusades went down.

Also I compliment PDX for using Jean de Lusignan as the demo beneficiary. He would have been a claimant in the 1300s for the kingdom of Jerusalem historically.

How moddable is this? Would it be possible to add AI logic for the contributor stance, to add similar crusades for other religions, to tweak the logic for different contributions, etc.?

What happens if two rulers who've pledged to support the crusade are at war with each other when it starts (assuming it is possible to end up in such a situation)?
Toggle signature
You must become king. Of everything. - From the Diagram, Tenets of Instruction, Back of the Footboard: paragraph 1

Zaister said:
This is aweseome, especially the feature to switch over to the new Crusader King/Queen. Finally the name of the game makes sense!
Click to expand...

Yeah, it is actually really fun. Though I would recommend some caution before switching over, as it can be .. Somewhat dangerous being the only Catholic ruler in Arabia for example.
Toggle signature
Twitter: https://twitter.com/SnowCrystal_GD

This is simply brilliant news!
M

I LOVE this. I feel the swapping character mechanic might be prone to exploiting... which I also LOVE!! Great job guys!

How much can we mod this? Can we apply this mechanic to a custom religion?
Toggle signature
Lead Scripter/Class Designer/member of ruling troika of the Faerun Soviet
https://forum.paradoxplaza.com/forum/index.php?threads/mod-d-d-forgotten-realms.1042010/