Jump to latest Follow Reply
Menu
Install the app
You are using an out of date browser. It may not display this or other websites correctly.
You should upgrade or use an alternative browser.
Crusader Kings II 69677 Bug Reports 19696 User Modifications 10544 Suggestions 5969 Tech Support 6344 After Action Reports
Previous dev diary Next dev diary
Show only dev responses

We’re working away, and we’ve been working away for quite some time now - it’s just much too early to go into detail on what we’re doing yet, but rest assured that we have a lot of interesting stuff going on!

Without spoiling the theme of the upcoming expansion, we want to give you something to look at and discuss. In addition to all the theme-specific features we’re making, we’re also slowly working our way through some of the more neglected areas of the map, correcting mistakes and increasing the granularity of the playing field. Here’s one such area, Poland: 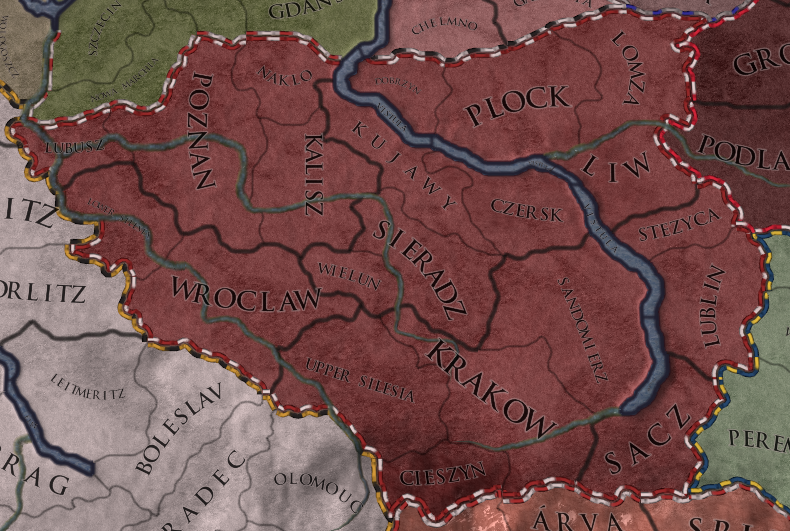 Code:
Later this spring (date yet TBD) we’ll release a bug-fixing patch, so remember to head over to the bug forums and report any issues you find.

Please note that the time between Dev Diaries will be irregular, as we’re very early in the development cycle.

6(?) new provinces compared to the current version? The current one has 15 provinces, the new one has 21 if I've counted correctly. 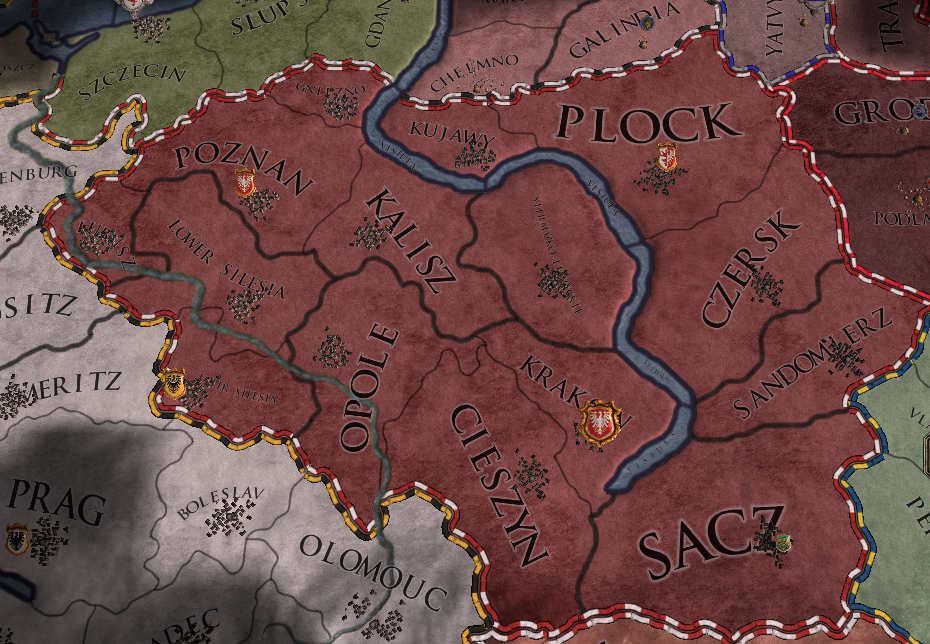 Happy to see some love for geography!

Will East German provinces like Brandenburg be cut up?

Chief Chronicler of the Komnenoiverse

Poland getting a province revemp? Oh boy! That particular kingdom will always have a special place in my heart for being the first one I jumped in the CK2Demo. Haven't played as them for a while but this might convince me to do a Poland playthrough again!
Toggle signature
"The multiverse theory is an interesting subject to ponder upon."
-TWR97

kmh42 said:
It's also oddly quite in the bug forum. When will a dev go through and confirm bugs?
Click to expand...

When a Dev decides that there's a point in doing that I presume.
Toggle signature
Nationality: Croat
Religion: Roman Catholicism
Ideology: Rightist
Last Megacampaign: CK2 -> EU4 -> Vic2 - Crusader Panonians
Last EU4 playthroughs: France, Commonwealth
GENERATION 40: The first time you see this, copy it into your sig on any forum and add 1 to the generation. Social experiment.
T

Could you tell us what the new, cool features are?

I promise to keep it secret.

So to state the obvious: Bohemia (Prague on the right side of the river), Brandenburg and Pomelia got some tweaks besides Poland.

Looks like they're trying to close some loops, which is great. A portrait DLC would be very welcomed and it would be interesting to see what families they can make playable with these new provinces.

Silversweeeper said:
It seems Pomerania also is getting a facelift as the provinces there do not appear to match the current ones, unless my eyes deceive me. Nice!
Click to expand...

A small facelift indeed : both duchies (Pomerania & Pomeralia) get one new province each (Nowa Marchia/Neumark & Bytow)

Because of river placement tweaking, Brandenburg ended up 50% bigger than before (believe it or not...), so yeah, we ended up cutting it a little bit, pushed some stuff around and added the province of Gorlitz just south of Lausitz. Brandenburg is still relatively big, but to a more acceptable degree


Voy said:
So to state the obvious: Bohemia (Prague on the right side of the river), Brandenburg and Pomelia got some tweaks besides Poland.
Click to expand...

Bohemia has indeed been moved a bit down south to adjust with Neo-Poland, Eastern Germany 2.0 and the Elbe II - The Ultimate Final Return

Im really happy to hear more neglected parts of the map are getting more attention. Can we get a hint of what other parts are being upgraded?

So this really is a bug-fixing patch !

Es57 said:
So this really is a bug-fixing patch !
Click to expand...

No. The bug was added!
Toggle signature
Small Mods:

will you consider moving retinues to a free feature like you did with the stellaris stuff? I still dont understand the reasoning. I think in stellaris it was ascension perks that were only for those that purchased the expansion and then it will be changed so that its for everyone. Couldnt it be the same with retinues? in which case you could finally change the way you have them setup as you wanted to? Overall I really wonder how many people dont have legacy of Rome anyway?

Thure said:
No. The bug was added!
Click to expand...

nestorius said:
will you consider moving retinues to a free feature like you did with the stellaris stuff? I still dont understand the reasoning. I think in stellaris it was ascension perks that were only for those that purchased the expansion and then it will be changed so that its for everyone. Couldnt it be the same with retinues? in which case you could finally change the way you have them setup as you wanted to? Overall I really wonder how many people dont have legacy of Rome anyway?
Click to expand...

The problem with this is... many people did buy LoR only because of retinues. So... if they move it to a free feature they would literally punch this people in their face.
They already said it was a mistake but it's not a easy way to change it now without pissing people off.
Toggle signature
Small Mods:

nestorius said:
will you consider moving retinues to a free feature like you did with the stellaris stuff?
Click to expand...

I guess Poland cannot into space.

... oh God, what have those puns done to me?
Toggle signature
A conqueror is always a lover of peace, he would prefer to take over the country unopposed.
-Clausewitz

While you're at remaking Poland, please don't forget to incluse the "ó" letter (the only Polish letter you can use in CK2) in province and holding names. I can already see "Kraków" missing one (I'm assuming you're going for cities' native spellings). I hate having to edit province names manually just to add the missing "ó".
Last edited: Jan 29, 2018
Toggle signature
"Diacritics are important!" - a person obsessed with diacritics

Also, i really hope that map of Rus would be changed somewhat. Some additions to represent realtions between steppe and east slavs would be cool. And river trade :3 The main routes for east slavs were rivers, cause in north-east parts it is nearly unreal to travel on land during autumn-winter-spring.
Toggle signature
Thou shalt not make a machine in the likeness of a human mind.

Initially, when I read the title of this thread I thought it would address the much-required cosmetical attention the map needs. The focus of this DD is a very important one, but I believe that a superior map skin would make the game more pleasant since it is an area of the game you spend 100% of your time on. I would like to bring the example of the NRBT mod because I think its creators addressed this issue very successfully.
I think that NRBT mod creators did a great work in regards to "polishing the map". I think that CK2 dev team could take some inspiration of how a polished map could look like, which can be seen in a screenshot below I took some years ago. This mod offers very clean and tidy map.

Last edited: Jan 29, 2018
Toggle signature
"Empires do not suffer emptiness of purpose at the time of their creation. It is when they have become established that aims are lost and replaced by vague ritual".

shiro the bushi said:
Im really happy to hear more neglected parts of the map are getting more attention. Can we get a hint of what other parts are being upgraded?
Click to expand...

Most of the German speaking provinces of the HRE (so today Germany, Austria and Switzerland) could seriously need some polishing, rework and tweaking. Most provinces there haven't been changed since CK II was released and are basically leftovers of CK I. Bohemia (and to a lesser degree the Low Countries) might need some extra attention too, though relatively speaking, it's more urgent for the German speaking provinces.

If you keep adding more provinces (which is a good idea), will you increase the demesne limit, either directly or through the laws and stewardship effect ?
Toggle signature
Dr. Klen'Moral Observations on the effects of isolation on Hive-Minded drones - A Stellaris scientific report