Good morning, all. I’m Magne “Meneth” Skjæran, the programmer on CK2. In the past I’ve written dev diaries about modding, optimization, and quality of life improvements, as well as a few diaries this summer about the team, the bug fixing process, and what we’re doing for modders.

We’re now returning to regular dev diaries, so today I’ve been given the opportunity to reveal a new feature: rally points.
And to maintain my tradition from the summer, at the end of this dev diary will be five changelog entries from the 2.8 patch.

Rally points are a rather classic strategy game feature which can do a lot to make troop management more manageable. While in the early-game, there usually isn’t much of a need for such a feature in CK2, as you grow larger collecting your troops at the start of a war increasingly becomes more tedious. This is especially the case in multiplayer, where you don’t have the luxury of pausing.

In 2.8, we’re finally rectifying this by adding the ability to define rally points, both for land units and ships. 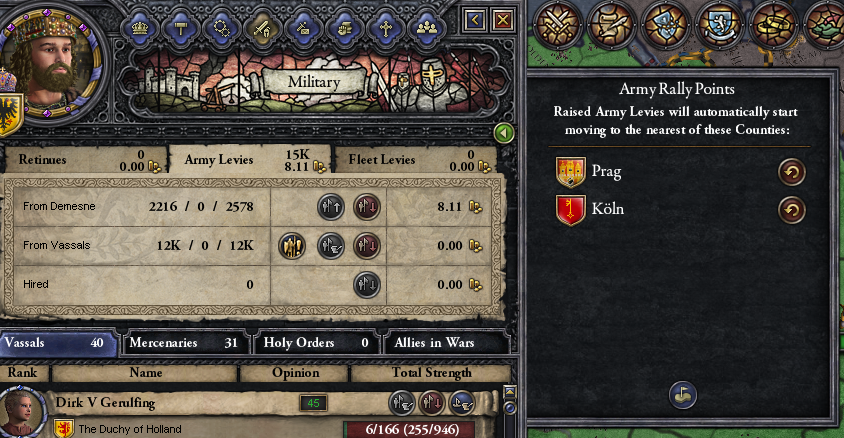 Now, when you raise your troops and have rally points defined, the raised troops will immediately start walking towards the nearest rally point by travel time. Once they get there, they will merge with any troops in the province.

While rallying, they will not appear in the outliner, but instead the rally point entry will show how many troops are incoming.

If you disable the “rally points” section of the outliner, the individual armies will show as before.

You can define any number of rally points, and can put them anywhere in your realm, so you can set them up to suit any layout.
Units will only rally to provinces they can walk to (sail, in the case of boats); they will not use transports to get there. So you might for example want one rally point on the British Isles, and a handful in mainland Europe.

Now, as promised, here are 5 changelog entries from 2.8:
I hope you will all enjoy the rally point feature. That’s all for today.

Finally! I've been waiting for this since 1.0.
Toggle signature
Sit now there, and look out upon the lands where evil and despair shall come to those whom thou allied. Thou hast dared to mock me, and to question the power of France, master of the fates of Europe. Therefore with my explorers thou shalt see, and with my spies thou shalt hear; and never shall thou be released from vassalage until all is fulfilled unto its bitter end.

A feature that the game should have launched with, but a positive addition overall.
Toggle signature
I can't wait to pay for everything in CK3 that I've already paid for in CK2.​

Meneth said:
Taught the Pope that lifting his own excommunication when he becomes the Pope makes him a better role model for other Catholics
Click to expand...

Well, you can install antipopes to become popes, so they might be Excommunicated and still become Pope.
Toggle signature
How to buy Victoria 3 with buckets of ducats (or: how much is Paradox worth in old golden coins).

Castorem said:
Too bad you didn't also add an "embark all possible troops" button, which would also ease a lot of suffering on the players' side. Rallying points are nice, but what if I'm an island power and it's more time efficient not to rally my armies in one province, but rather embark all possible ones on ships and send them on their way, while rallying the remaining troops in a province, where the empty transports will arrive to pick up the rest of the army.
Click to expand...

There's a hotkey and button for that already when you've got troops selected. Shift+V will do the trick.
Toggle signature
~ Magne Skjæran - Crusader Kings 3 programmer
Follow me on Twitter for out of context quotes from Paradox
J

Meneth said:
There's a hotkey and button for that already when you've got troops selected. Shift+V will do the trick.
Click to expand...

How will that interact with rally points, if the armies and navies start moving the instant they are raised?
Toggle signature
Mothballing Megastructures - A Stellaris Suggestion thread.
Reduce Construction Ship Micro - A (slightly older) Stellaris suggestion thread.

What happens if you move armies away from rally-points? Will new arrivals begin forming new armies?

Jorlem said:
How will that interact with rally points, if the armies and navies start moving the instant they are raised?
Click to expand...

If you were to select them and hit Shift+V, the coastal ones that are able to would go on boats and stop moving. The rest would keep rallying.


PanzerKrigs said:
What happens if you move armies away from rally-points? Will new arrivals begin forming new armies?
Click to expand...

Yep; they simply merge into whatever armies of yours are standing still in the rally point.
Toggle signature
~ Magne Skjæran - Crusader Kings 3 programmer
Follow me on Twitter for out of context quotes from Paradox

I think everyone missed the main point of this update:

Sucks that troops won't use transports, it's really inconvenient for realms with a lot of coastline and not a lot of traversable terrain (or big distances between provinces).

I didn't know I needed this, but now I need this.

Cheers for the DD Meneth . That is a great little feature, should reduce the early wartime micro considerably .
Toggle signature
If interested, please vote for better surfacing of information in HoI4 in this suggestion thread

Artaios Greybark said:
A great addition to the game. Does anyone know when the vacation time will be over for most of the team?
Click to expand...

As of today, 6 out of the 9 people who sit in the CK2 corner are back. Another will be back tomorrow, and the last two on Monday.
Toggle signature
~ Magne Skjæran - Crusader Kings 3 programmer
Follow me on Twitter for out of context quotes from Paradox

Any timeframe to release the krak... 2.8 patch?
Toggle signature
"Agreed. We need elephants in the seduction schemes."
By Razmorg

Great and much needed feature, thanks!

I was recently thinking of something else - the levies from baron-tier vassals from your own demesne. If you do not Z-key levies from demesne (so your own levies and that of your barons merge together) but rather raise them separately through the military screen, they often cannot keep up with your own levies due to low morale, resulting in being intercepted and destroyed. If you have ~12 provinces of demesne that is kind of tedious.
Maybe they could be merged with your levies by default if your private levies were raised first? (so you can still raise only baron-tier levies by hitting the "raise vassal levies" first)
Or maybe the whole system could be changed so rather than providing a separate squad, cities/bishoprics/baronies would rather add a flat levies' bonus for the top holding of a province?
Show hidden low quality content
You must log in or register to reply here.
Share:
Facebook Twitter Reddit Tumblr WhatsApp Share Link
Top Bottom