Jump to latest Follow Reply
Menu
Install the app
You are using an out of date browser. It may not display this or other websites correctly.
You should upgrade or use an alternative browser.
Crusader Kings II 69466 Bug Reports 19673 User Modifications 10465 Suggestions 5868 Tech Support 6318 After Action Reports
Previous dev diary Next dev diary
Show only dev responses
Greetings!

Today I want to bring up some minor, but still very flavorful, changes and fixes we’ve done to a few religions. Most of what I’m about to present is the courtesy of our talented and passionate betas, who suggest a lot of good improvements!

Manichean
The Manichean religion, which in-game is part of the Zoroastrian Group and mainly present on the Steppes, has been changed to be more historical and just generally more fleshed-out. For example, rulers of the Manichean faith can no longer take concubines, can now have female temple holders and get access to Reincarnation events. The religion also receives a bunch of new goodies:


Khurmazta
The Khurmazta religion is a new heresy in the Zoroastrian group, and is mainly present in Khiva and the new Pamir areas among the Sogdian people who live there. Rulers that adhere to the Khurmazta faith can choose to embrace a Patron Deity, who all give various bonuses much like the Hindu patron deities do. 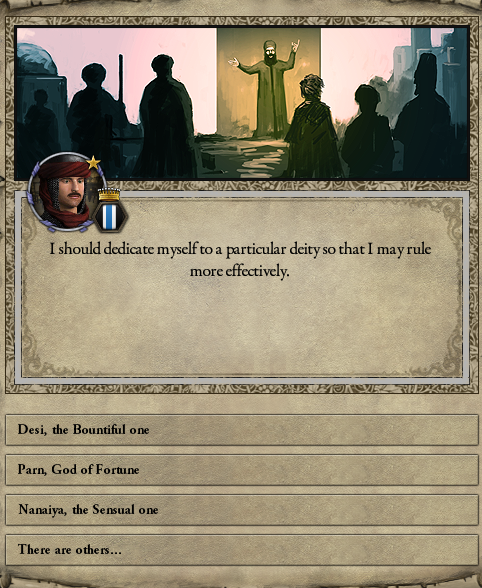 Nestorian
The Nestorian religion, which is present in parts of Arabia, India and Africa, has also been fleshed out with new details. There is now a decision to form their Holy Order (The Order of Saint Addai) and, while not strictly relating to Nestorianism, we’ve added a new culture that is primarily Nestorian - the Assyrian culture. The Assyrian culture is present in the area around Baghdad/Syria. 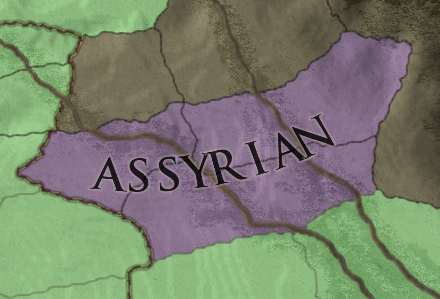 General
One of the main things that caused India to be very stagnant and overly resistant to invasions was the fact that they started out with very powerful Holy Orders right out the gate. We’ve reconstructed these so that you can form them under certain circumstances, and they will automatically form when India is under threat, i.e. by letting some of the major cities fall to invaders. 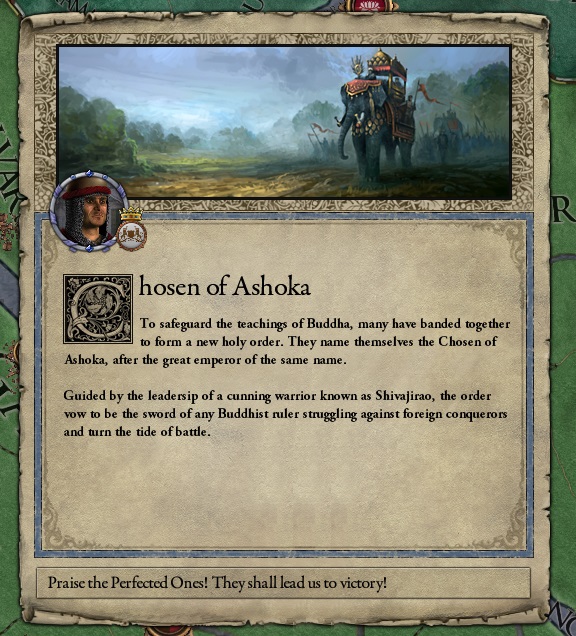 Also, a lot of religions have had their Holy Sites moved around. The Indian religions, Nestorianism and Manichean in particular. They’ve primarily moved into the Purang county in Tibet, to the holy mount Kailash.

Yey! Finally we have a dev diary
Toggle signature
"The whole idea of revenge and punishment is a childish day-dream. Properly speaking, there is no such thing as revenge. Revenge is an act which you want to commit when you are powerless and because you are powerless: as soon as the sense of impotence is removed, the desire evaporates also." ~ George Orwell

Oh this is sooo lovely! Are there any religious changes planned to the Druze and Si'a in general? Or the possibility of Sufi Societies?
Toggle signature
How to buy Victoria 3 with buckets of ducats (or: how much is Paradox worth in old golden coins).

Just like Zunism I've never heard about Khurmazta before. Paradox games making me learn, woo!
Toggle signature
"... what is Japan if not merely the Italy of the East?"

Will Assyrian be in the Arabic culture group?

This is probably a very small thing but having violet Assyrian culture reminds me of the fact that East African cultures like Nubian have really similar colors to Arabic, you'd think they were part of it
B

Still no plans on letting Germanic rulers dedicate themselves to a specific god? Or are you just assumed to automatically go Odin?
M

Are Manicheans now a separate religion within the Mazdan group or are they still a Zoroastrian heresy?
Toggle signature
Sit now there, and look out upon the lands where evil and despair shall come to those whom thou allied. Thou hast dared to mock me, and to question the power of France, master of the fates of Europe. Therefore with my explorers thou shalt see, and with my spies thou shalt hear; and never shall thou be released from vassalage until all is fulfilled unto its bitter end.

Is this and Tribute changes coming in a patch or DLC?

Yeah, throwing all Semitic cultures into Arabic culture group is a little...odd setup in vanilla CK2.

Very nice that manicheanism gets some attention. It is interesting faith that has had influence beyond it's adherents.
Toggle signature
Allow Non-Aligned countries to puppet! Please.
Fanatic Converter - PM me Costa Rica meta!

rageair said:
Manichean
The Manichean religion, which in-game is part of the Zoroastrian Group and mainly present on the Steppes, has been changed to be more historical and just generally more fleshed-out. For example, rulers of the Manichean faith can no longer take concubines, can now have female temple holders and get access to Reincarnation events. The religion also receives a bunch of new goodies:

This right here has made the next patch already the best patch yet.
Also will the Religious Head of Manichean be able to declare a Great holy war?
Toggle signature
A (civic) nationalist and center-left American.

VoodooEconomist said:
Are there any religious changes planned to the Druze and Si'a in general?
Click to expand...

Maybe! We haven't done anything yet, but seeing as we've tweaked a lot of religions already it's not outside of our scope


Rikissa said:
Will Assyrian be in the Arabic culture group?
Click to expand...

Assyrians are in the Byzantine culture group and use Andalusian portraits to show the cultural mixing that occurred after Muslims conquered Mesopotamia. A few playable Assyrians appear in later start dates, where historical governors under Mongols have been given counties to run


Me_ said:
Are Manicheans now a separate religion within the Mazdan group or are they still a Zoroastrian heresy?
Click to expand...

They are still a heresy

rageair said:
Maybe! We haven't done anything yet, but seeing as we've tweaked a lot of religions already it's not outside of our scope
Click to expand...

Fantastic! Going along with the spirit of these changes, I think Druze drop Polygamy, gain Reincarnation, and should also lose the Decadence mechanics. They make little sense for some Muslims, not to mention the non-Muslim Druze!

Other than that, Druze is not a missionary religion as it is. It's difficult to become Druze if you are not born Druze. This is why the religion never had a chance to spread, but also why it survived so long! Which is why in my opinion there should be a different mechanic for them - perhaps using Societies - not to "secretly convert" but to give other characters a "Friend of the Druze" trait and have them be able to marry Druze and have the child be born into the religion. Don't know how hard it would be to implement.

Alternatively there could be an option to "reform" the religion to make it a more missionary religion, but that should be hard to accomplish.

By the way, having such a society would work for the Fatimids too, but more like a secret society, since they overtly pretended to be regular Shi'a but had esoteric practices and beliefs only for the inner circle.
Toggle signature
How to buy Victoria 3 with buckets of ducats (or: how much is Paradox worth in old golden coins).

That is all very nice but when you do the religious tweaks, could you please add more crusade targets weight? I know you have already made some (around Reaper?) but crusades for Indian kingdoms happen all the time. There is this thread "Great holy wars" made recently in which the guy complains about a Jewish GHW for Andhra. I do not have any save myself but are saves really needed if that happens that often?

Great, but what about Suomenusko, which badly needs flavour, and can reformed pagans be allowed to proselytize in other countries, given that they're remodeling their faith to be more like the Christian church?
Last edited: Jun 12, 2017

rageair said:
rulers of the Manichean faith can no longer take concubines
Click to expand...

luanmameili[LM] said:
Even if they are Tribal or Nomadic?
Click to expand...

Being tribal/nomadic has always overridden monogamy restrictions so far...