Jump to latest Follow Reply
Menu
Install the app
You are using an out of date browser. It may not display this or other websites correctly.
You should upgrade or use an alternative browser.
Crusader Kings II 69634 Bug Reports 19693 User Modifications 10528 Suggestions 5969 Tech Support 6341 After Action Reports
Previous dev diary Next dev diary
Show only dev responses

Today I’d like to talk about the revamp of Secret Religious Cults that we’ve been working on for the past few weeks. At the launch of Monks and Mystics the system was entirely trait-based, i.e. if you were a Catholic in secrecy you would have a ‘Secretly Catholic’ trait. This system was clunky and hard to work with, so we decided to instead go for a code solution where both the ‘traits’ and the Cults themselves are automatically generated. Yes - this means that all religions (as long as they are present in the game at any start date) now have an associated Secret Religious Cult!

We also changed how the Secret Religion itself is displayed, instead of being a trait it is now displayed next to the characters real religion - as can be seen here: 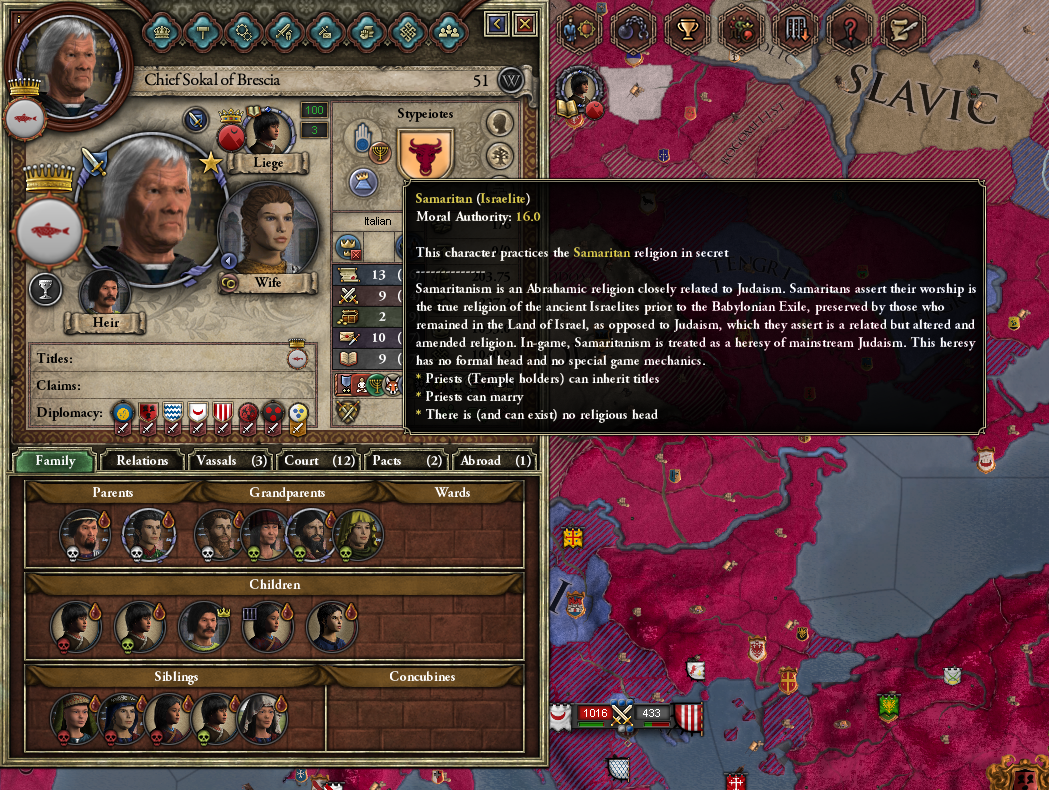 You can also search for characters that are of the same secret religion as you using the new filter ‘Has Secret Religion’ in the Character Finder. If you do, their secret religion is displayed next to their age: 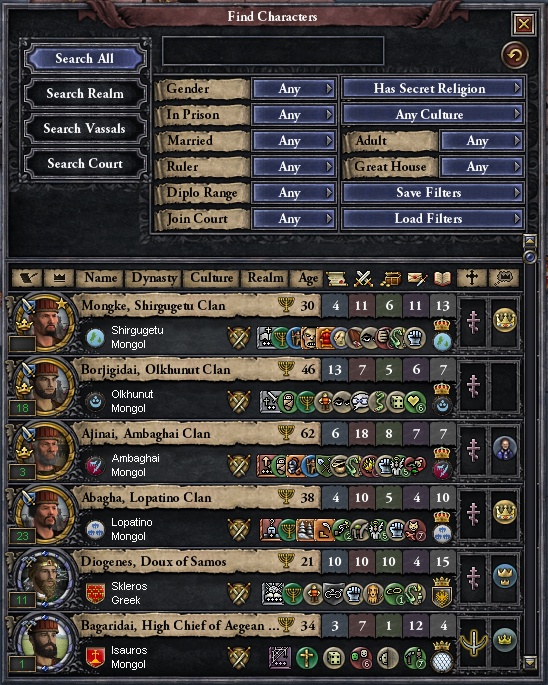 Another thing that we improved is the participation of your fellow members when you’re part of a Secret Religious Cult. They will now much more actively seek out to induce sympathy, induct and recruit other characters to the cult - for better or worse. To balance this increase in recruitment we’ve made it much harder to induct characters who are Zealous or of King/Empire tier. Also, your top priority should be to induct the Court Chaplain of the top liege, lest this will happen to you... 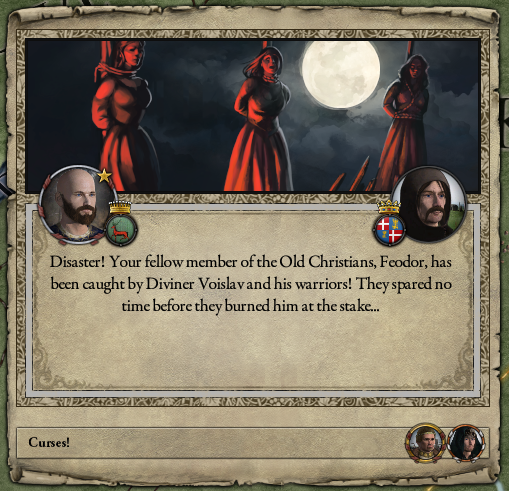 To provide ample opportunity for you to convert in secret we’ve added a whole bunch of new decisions to take, as well as a couple of new options in existing events. You can, for example, choose to convert in secret to the religion of a spouse, concubine or friend. You can also choose to secretly convert to the religion of one of your demesne provinces, or if you happen to own a Holy Site (of an existing, living, religion), secretly convert that way as well.

Not relating to Secret Religious Cults, but rather secrecy in general - if you as a Devil Worshiper isn’t careful enough, it’s possible for you to get attacked by Demon Hunters! This should motivate any dark cultists to stay in the shadows and not reveal themselves by blatantly using their power. As implied it’ll also be possible, if you aren’t careful, to reveal yourself as a Devil Worshiper by using your powers too often (especially if you are independent, as there’s no Court Chaplain that can hunt you down normally!). Note that there are many different Demon hunters that can track you down, and you might even have repeated run-ins with some of them...

Now I’ll hand over the keyboard to Magne “Meneth” Skjæran for a moment to talk about how moddable this new Secret Religious Cult system is:

We’ve designed this new secret religion system from the ground up to be highly moddable. One of our main goals was to reduce the amount of work involved in creating new societies, benefiting both our content designers, and modders in general.

To achieve this, the system is built around a rudimentary dynamic society system. This system is currently only available for religions. What this system allows is defining one or more society templates, which can then be instantiated by religions. This allows separate localisation for each religion’s cult, members, currency, etc., but means that the core of the society only has to be defined once.

There’s also a number of new triggers and effects associated with secret religions, meaning you can now easily tell what someone’s “true religion” is for example, defined simply as their secret religion if they have one, and otherwise their public religion.

To sum it all up, here’s the relevant modding changelog items:


- FROM in on_character_convert_religion and on_character_convert_culture is no longer a temp character, but instead the culture/religion itself. This only provides access to comparing to the culture/religion (or group). It should also still work to set cultures/religions and such. Please report any issues encountered with it. This change also means that it should now be possible to reference the previous characters outside "immediate" and similar without the game crashing

- same_society_as trigger will no longer be true when both characters are not part of a society.

- The religion triggers (religion, secret_religion, true_religion, and the group versions) can now optionally take a "target_type" determining which religion of the target they check against. E.G., religion = { target = ROOT target_type = secret } will check if the scoped character's public religion is the same as ROOT's private religion. The valid types are "public", "secret", and "true". The default is to use the same as the type being checked; religion default to public, secret_religion to secret, true_religion to true. A religion (group) name as the right-hand-side works for all the triggers

- Effect set_secret_religion takes a religion or a scope. It optionally takes a target type (true/secret/public), but defaults to secret

- Added trigger has_secret_religion which takes "yes" or "no"

- Who can see a character's secret religion is defined in 00_religions.txt

- Added a can_see_secret_religion trigger. Takes a scope, and checks if the character scope you're currently in can see the target character's secret religion

- Societies can now have an associated religion, which is accessible from script in the same way as character or province religion, including on the right-hand-side of triggers and effects. This is scripted with for example "associated_religion = catholic". It has no effect beyond being accessible via script

- Added a convert_to_secret_religion effect. Takes "yes" or a character scope. Sets your public religion to your secret religion, or the target character's secret religion if a scope is used

- All religions except those specifically excluded get a secret religious society generated. The attributes of this society is defined by a template in 00_societies.txt

- Added a secret_religious_cult scope, which will scope to the cult associated with the character's secret religion. Also works in religion and province scopes. This can also be used on the right-hand-side of effects and triggers

- Added religion_scope, secret_religion_scope, true_religion_scope, and culture_scope as scopes. These scope to the religion/culture of the character/province/society (only religion for societies) currently scoped to. Can be saved as event targets

- Fixed the society rank tooltip not having FROM defined. FROM is now the society grand master, as with other society tooltips
Last edited: Mar 27, 2017

So does this mean heresies now have societies?​

Link777 said:
So does this mean heresies now have societies?​
Click to expand...

Heresies will now have secret religious cults, yes.
Toggle signature
~ Magne Skjæran - Crusader Kings 3 programmer
Follow me on Twitter for out of context quotes from Paradox

Hmmm.... Divulging the name of another demon worshipper to a demon slayer will certainly be an intelligent choice.

Love this changes, especially on the modding side!

Praise the Platypus gods of Paradox!

@Meneth can we have multiple secret religion societies for one particular host religion?
Toggle signature
Lead Scripter/Class Designer/member of ruling troika of the Faerun Soviet
https://forum.paradoxplaza.com/forum/index.php?threads/mod-d-d-forgotten-realms.1042010/

A non-believer cynic society would be neat ...

Zarathustra_the said:
@Meneth can we have multiple secret religion societies for one particular host religion?
Click to expand...

No. It'd mess up the scoping and such pretty badly.
Nothing stops you from having static societies defined as well that essentially serve the same purpose though, but then you won't have the advantage of the scoping improvements and the template system.
Toggle signature
~ Magne Skjæran - Crusader Kings 3 programmer
Follow me on Twitter for out of context quotes from Paradox

Very nice, I like the option to secretly convert. One problem I encountered was if I died before my heir was old enough to induct into the order, the new options should hopefully make it easier to get back on track, but is it possible to also secretly convert if either a province secretly follows a faith or perhaps choosing to follow your predecessors footsteps?
Toggle signature
Hopes for the future of Stellaris:
Scrapping/Rework of the clickfest planetary management.
Rework of fleet construction (particularly the rebuilding clickfest)
More macro-management & automation tools.
In depth internal Federation politics.
More random events and story chains.
Ability to do everything from the galactic map.

What will happen to characters with a secret religion in a 2.7.0.2 save, if loaded in 2.7.1? Will the saves not be compatible?
Toggle signature
Mothballing Megastructures - A Stellaris Suggestion thread.
Reduce Construction Ship Micro - A (slightly older) Stellaris suggestion thread.

hironolind said:
is it possible to also secretly convert if either a province secretly follows a faith
Click to expand...

My understanding was that provinces aren't supposed to have secret faiths, but since you're likely to have different religions among your provinces you'll be able to chose many secret religions.

The saves will actually be compatible!

No, though that's not a bad idea.

An event converts the traits to secret religions, and the "- Added a save_conversion folder in "common" which handles convering obsolete objects in saves. Currently handles religions and societies" system handles the two societies where the internal name is different.

So it should work seamlessly with 2.7.0.X saves.
Toggle signature
~ Magne Skjæran - Crusader Kings 3 programmer
Follow me on Twitter for out of context quotes from Paradox
F

Will it be possible for the player to become a demon hunter?

Cheers for the DD Rageair/Meneth . A big fan of better conversion options and more dynamic secret religions, as well as quality modding support .
Toggle signature
If interested, please vote for better surfacing of information in HoI4 in this suggestion thread

It should be part of the 2.7.1 [balance/improvement] patch which should be out in late April or early May**.


**This is not a confirmation, but an assumption based on previous release patterns.
Toggle signature
Useful links: Account sync | Paradox wikis | Buildings RoI

I am sad to hear to you will not add any new societies to the game, but "only" hand out modding material. I think there are many skilled modders here, no doubt, but I would have liked to see that Paradox themselves made these societies, so it was as good as possible.
My fear, is that it there will not happen anything new on this front for months, and then suddenly there turns up 2-3 small mods that add a new society each, but then something goes wrong and they can't work together.