Jump to latest Follow Reply
Menu
Install the app
You are using an out of date browser. It may not display this or other websites correctly.
You should upgrade or use an alternative browser.
Crusader Kings II 69584 Bug Reports 19689 User Modifications 10510 Suggestions 5909 Tech Support 6334 After Action Reports
Previous dev diary Next dev diary
Show only dev responses

Hello everyone, I’m Gwenael Tranvouez, the Tech Lead on CK2, and I’m here to introduce a new feature for this Dev Diary.

Don’t you hate it when you’re start a war against a neighbour, counting on your allies to come and help and they all decide the best idea is to attach to your army so that you’ll take attrition? So do we!

So we’ve taken another leaf from EU4’s big book of tricks and we’ve added Ally Orders. When you lead a war, you can tell other participants what to do:
The first two orders are given through a new tab in the military screen, which also summarizes what orders all your allies have: 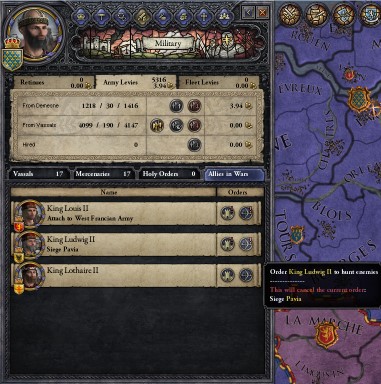 The last two are given through a new button on the unit or province screen: 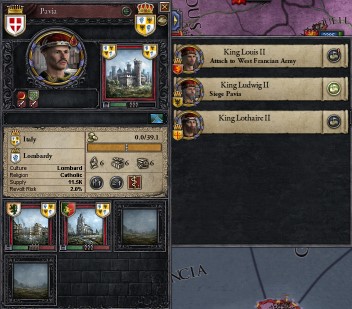 As long as they’re in the war, your allies will try their best to fulfill your wishes, reverting to their default behavior when unable to comply. Unless, of course, they got bigger fish to fry, such as a big revolt in their own territory, or their own war to focus on.

The tooltip for AI units also mention what orders their owners have:

We’ve also improved the AI’s goal selection in wars, and general pathing so they’re more useful to have around in general.

That's good news. Still I miss some information about the expansion and societies
Toggle signature
The Kingdom of Navarra and Medieval Basques did not practice Cognatic Succession

Surprised features like this and 'ask to leave court' took so long to implement. Seem like common sense additions. Happy they are finally being added though. Hopefully more of this to come, assassination icon linking to assassination target etc
Reactions:

Does this also apply to tribal vassals?
Reactions:

King Anund said:
That's good news. Still I miss some information about the expansion and societies
Click to expand...

What sort of info are you missing?


Orajm said:
Does this also apply to tribal vassals?
Click to expand...

Not 100% sure, but I think so.
Toggle signature
~ Magne Skjæran - Crusader Kings 3 programmer
Follow me on Twitter for out of context quotes from Paradox
Reactions:

Amazing changes! Are there any new Game Rules coming next patch, like the much waited Education system rule?

Can players do this for other players in multiplayer?
Reactions:

Sounds nice! Is this content of the free patch or the DLC ?
Reactions:

So I'm assuming all the information about the latest expansion has already been released? When are we getting a release date?
Toggle signature
A historical grand strategy game's internal management mechanics are only as good as it is fun to play China in that game.
Reactions:

Regarding other priorities, has anything been done to make the AI focus on important wars and ignore tiny raider armies, peasant revolts, and other minor irritants?
Toggle signature
You must become king. Of everything. - From the Diagram, Tenets of Instruction, Back of the Footboard: paragraph 1

Does it come with any penalties?

At last no stupid AI armies walking aimlessly around the map ?
It will be interesting


Meneth said:
What sort of info are you missing?

Amazing!!
Toggle signature
How to buy Victoria 3 with buckets of ducats (or: how much is Paradox worth in old golden coins).
Reactions:

Just to be clear, @Moah, since you didn't say: is this patch content or part of the DLC?

Otherwise, extremely tickled to get this. Thank you.
Toggle signature
I must confess that over the past few years I have been gravely disappointed with the white moderate. I have almost reached the regrettable conclusion that the Negro's great stumbling block in his stride toward freedom is not the White Citizen's Counciler or the Ku Klux Klanner, but the white moderate, who is more devoted to "order" than to justice; who prefers a negative peace which is the absence of tension to a positive peace which is the presence of justice; who constantly says: "I agree with you in the goal you seek, but I cannot agree with your methods of direct action"; who paternalistically believes he can set the timetable for another man's freedom; who lives by a mythical concept of time and who constantly advises the Negro to wait for a "more convenient season." Shallow understanding from people of good will is more frustrating than absolute misunderstanding from people of ill will. Lukewarm acceptance is much more bewildering than outright rejection. -- Dr. Martin Luther King, Jr.

Moah said:
When you lead a war, you can tell other participants what to do
Click to expand...