Jump to latest Follow Reply
Menu
Install the app
You are using an out of date browser. It may not display this or other websites correctly.
You should upgrade or use an alternative browser.
Crusader Kings II 69634 Bug Reports 19693 User Modifications 10528 Suggestions 5969 Tech Support 6340 After Action Reports
Previous dev diary Next dev diary
Show only dev responses

Good afternoon. I’m Magne Skjæran, and you might remember me from my modding and optimization dev diary at the end of summer. My last day at Paradox was a few days after that, but since I had a great time working there this summer, I returned to the CK2 team about a month ago to work on the game part-time.
Today I will be covering a topic that’s been briefly mentioned earlier in the Easing Executions dev diary: quality of life changes in regards to the intrigue screen and plotting.

While the image shown in that dev diary was a mockup, the planned changes have now been implemented. However, the actual art isn’t done yet, so most images in this dev diary are touched up based on mockups rather than showing my programmer art. There is after all a reason I work as a programmer rather than an artist.

So let’s go through all the changes we’ve made to the Intrigue screen in detail: 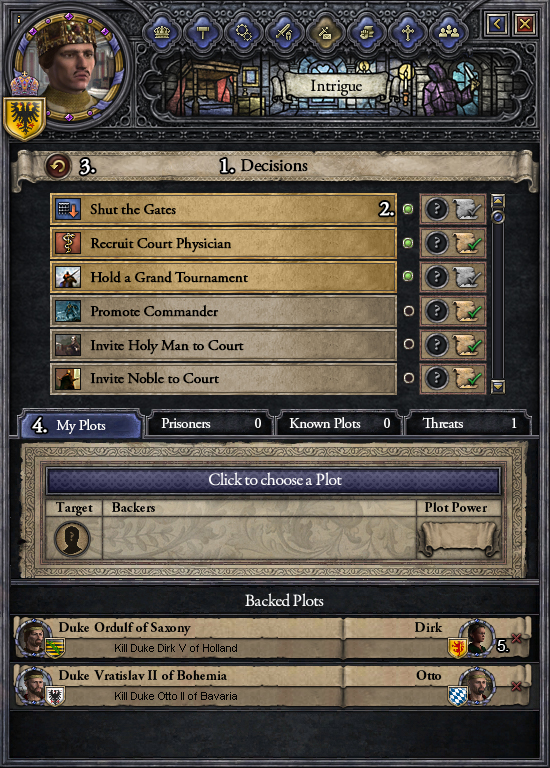 First, at #1, we’ve got the new decisions menu. It now shows 6 decisions at once rather than the old 4, making it easier to find what you’re looking for.

At #2, you can see that each decision now has a button allowing you to mark it as important or not important, thus allowing you to control which decisions you get alerts for. Marking a decision as important will change the background to gold, enable alerts, and move it to the top of the list. The last bit only happens once you exit and return to the decisions screen, since decisions jumping around when you click on them would be rather annoying.

#3 is a button allowing you to reset the priority settings to default.
What decisions are important is saved across campaigns, so you won’t have to mark decisions as important or not important every single game.

Further, at #4, we have a new tab: My Plots. This mostly just moves the plot functionality out of the way to give more space to the decisions list, but it does have one new addition: you can now clearly see who the target of each backed plot is, shown at #5.

Next, let’s go to the Prisoners screen: 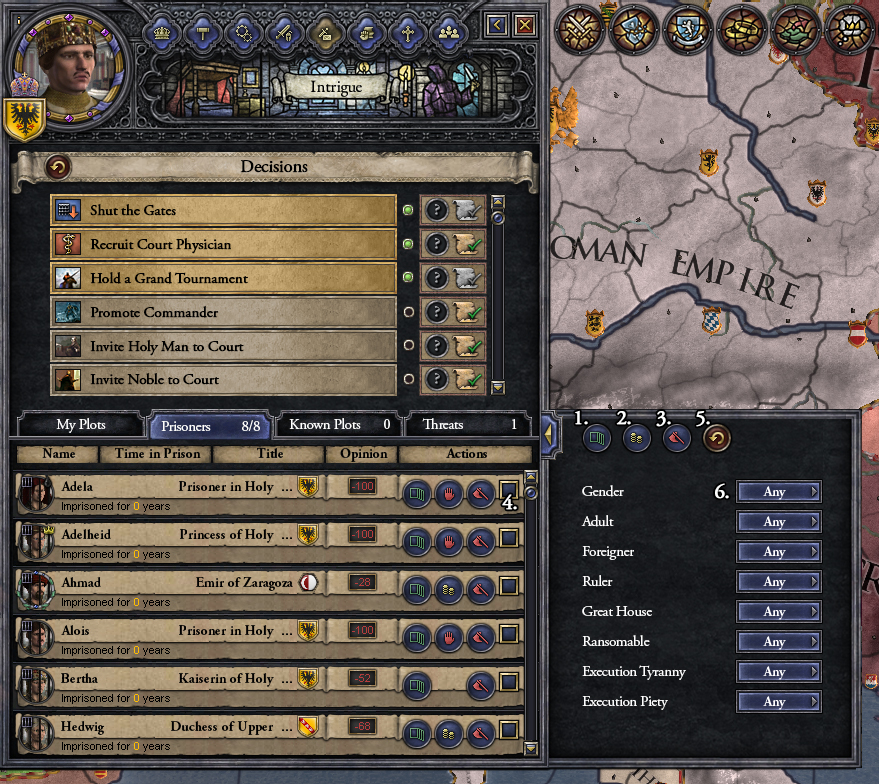 At #1, 2, and 3 you can see the new prisoner mass actions. These allow you to release, ransom, or execute all prisoners currently shown on the screen, except those that have been marked as locked using the button you see at #4.

Further, prisoners can now be filtered by the eight different criteria you see at and below #6. This can then of course be reset back to being unfiltered using the button at #5.
A minor change is that this tab now fits 6 prisoners at once rather than 5.

When using the mass actions you’ll be asked to confirm and told about the ramifications of your actions:

This ensures you’re never caught unawares by tyranny or similar.

Next up, Known Plots:

Here there’s two new additions. At #1, we’ve got a new button that lets you ask the plotter to end their plot, saving you a few clicks.

At #2 we’ve got a new feature: if you know about a plot and you’re in the group of people that’s possible to invite, you can ask to join. The AI will always accept this, while if you’re playing multiplayer the other player can refuse if they want to.

The “auto stop plots” button has also been moved to only show up within this tab.
As to the Threats tab there’s nothing new there except for six threats being shown at once rather than five.

That’s it for the Intrigue screen, but we still have a couple of tidbits related to plotting left. 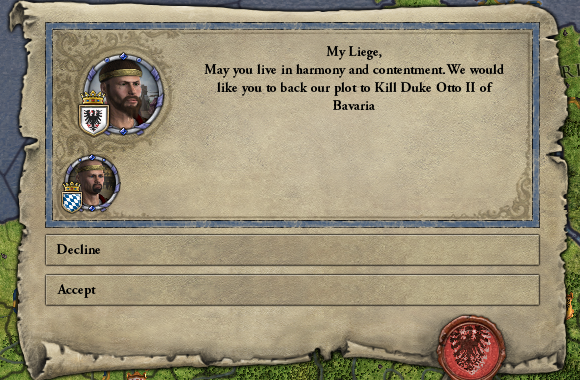 When invited to a plot you’ll now be able to see who the target is, saving you from having to use the character or title finder in order to figure it out.

Finally, when a plotter tries and fails to kill your spymaster due to them discovering their plot, you now have the option to keep the plot a secret, which is ideal for cases where you would rather join the plot than expose it.

That sums up all the changes we’ve made to make the intrigue aspects of the game simpler to interact with, and providing you the information you need to make decisions. Hopefully you’ve found this dev diary as intriguing to read as it was to write!
Reactions:

Meneth said:
Here there’s two new additions. At #1, we’ve got a new button that lets you ask the plotter to end their plot, saving you a few clicks.
Click to expand...

Is it just me or does the placement of this button and the button for asking to join the plot mean there will be a lot of misclicks?
Toggle signature
"The LORD executes righteousness and justice for all who are oppressed. He made known His ways to Moses, His acts to the children of Israel. The LORD is merciful and gracious, slow to anger, and abounding in mercy. As a father pities his children, so the LORD pities those who fear Him. For He knows our frame; He remembers that we are dust. The mercy of the LORD is from everlasting to everlasting." (Psalm 103:6-8, 13-14, 17)

Would it be possible to have an extra option in the mass action filter for including/excluding members of your dynasty, so you won't accidentally get yourself the kinslayer trait?
Reactions:

I must admit when I heard there were improvements I was expecting something nice but not this awesome. Basically all issues were addressed and the usual suggestions were included.

riadach said:
Would it be possible to have an extra option in the mass action filter for including/excluding members of your dynasty, so you won't accidentally get yourself the kinslayer trait?
Click to expand...

Considering the character finder I imagine Great House has something in that regard.
Toggle signature
Supreme excellence consists in breaking the enemy's resistance without fighting.
Reactions:

Wow, that's a very impressive interface rehaul. If the new DLC mades with intrigue and plots what Reaper's Due has done with epydemics and so... it'll be very, very welcomed.
Toggle signature
"Maybe you do not care much about the future of the Republican Party. You should. Conservatives will always be with us. If conservatives become convinced that they can not win democratically, they will not abandon conservatism. The will reject democracy". - Kevin Drum
MPs EU4: Etiopía, Ayutthaya, Portugal, Rusia, Francia, Suecia, Papado, Mameluco.
Ageod USA in Ageod's Civil War II: Feel the hard hand of wAAR! y Austria-Hungría en la I Guerra Mundial (MP Cooperativa To End All Wars)
Reactions:

But how will the mass prisoner options handle prisoners from the same liege?

That's something I've been wondering, has the game been updated to enable the AI to handle multiple diplomatic requests at the same time?

Or are these UI level improvements that are going to hiccup when attempting to perform multiple actions all with one liege?

Asiak said:
But how will the mass prisoner options handle prisoners from the same liege?
That's something I've been wondering, has the game been updated to enable the AI to handle multiple diplomatic requests at the same time?
Or are these UI level improvements that are going to hiccup when attempting to perform multiple actions all with one liege?
Also will the decisions importance button actually disable / enable the decisions from being used?
Click to expand...

Any chance for some filters for known plots? Especially as a large realm, it can be agonizing to find plots against members of your dynasty, for example, among 100+ plots.

Finally! This is one of those little improvements you didn't know you, as such, needed but once you try them out (in EUIV) you just can't play without.
Toggle signature
When you reduce a family tree to a family bush, you can't hide as much underneath.

Trying to reason with a Scotsman is like trying to geld a wildcat with your teeth.
- Uhtred of Bebbanburg

Finally!! Kill them all! KILL THEM ALL!!! Mwahahahahaha~~
It will be extremely fun to play vikings after this patch
Reactions:

So you're telling me now I can not only jail my political opponents, disarm them through marriage, provoke them into revolt and strip their titles, intrigue focus kill/kidnap them and plot their death but also volunteer to back plots of THEIR enemies against them?

For CK2 players who have trouble dealing with council revolts, check out my post here:
https://forum.paradoxplaza.com/foru...how-to-deal-with-council-faction-revolts.169/
Reactions:

Glad to see those quality of life improvements, anything to make the game run more elegantly.


No sign of the new portraits this DD, will keep an eye out for them next week. Duke of Bohemia seems to be using the standard portraits, which make it seem likely that we won't be getting a Western Slavic pack. (Or at least, that it's not ready yet)
Last edited: Nov 28, 2016

Furthermore, I believe all features that change balance and/or general feeling of the game should be either optional or DLC-locked.
J

Great stuff, Meneth! You truly are the best of coders.

Welcome back, nice post.
Toggle signature
Outlined-Papyrus Map Font Mod.
My proposal to change the way [your] council is handled on the world map.
My proposal to include Norse Runestones as provincial modifiers where they are erected.
The "Arrange Marriage" screen should use the same interface as the "Find Characters" screen.
​

Andrzej I said:
Is it just me or does the placement of this button and the button for asking to join the plot mean there will be a lot of misclicks?
Click to expand...

It'll bring you to the diplomacy page, so it is rather unlikely you'll end up doing something you don't want to.
Also note that the art and layout isn't final.

riadach said:
Would it be possible to have an extra option in the mass action filter for including/excluding members of your dynasty, so you won't accidentally get yourself the kinslayer trait?
Click to expand...

Great House lets you select your dynasty, though not currently the inverse. I'll note it down as something that would be a good idea to do.
No promises that it'll get done though.

Asiak said:
But how will the mass prisoner options handle prisoners from the same liege?
Click to expand...

For execution and releasing, it doesn't matter, since those interactions don't care who the character's liege is.
For ransom, it'll ransom the first eligible character on the list for each liege.

Asiak said:
Also will the decisions importance button actually disable / enable the decisions from being used?
Click to expand...