Hello all, it’s time for another DD about <Secret DLC> and interesting 2.6 patch things! I am pre-writing this DD to be posted while I am on vacation, so I may or may not show up to answer questions when it goes live. Anyway, “today” I want to reveal a few cool but unrelated features and fixes we’ve made.

Let’s start with some rather old complaints! Flanders is now part of k_france. Wow! And on the subject of France, the AI king of France will no longer create the Kingdom of Aquitaine unless they are close to meeting the requirements of creating the empire of Francia. Barcelona and Trier are also in more logical places.

A little pet peeve I’ve had since playing Conclave was that the fact someone owes you a favor is a bit hard to see, so there is now an icon on a character’s portrait if they owe you one.

Speaking of favors, Muslims will be able to force Decadent relatives to shape up using favors now too.

Players with Horse Lords may have been annoyed at the number of clicks needed to pillage a holding, so instead of needing to continually decide to pillage, the decision is now a toggle rather than an action. Once you decide to pillage, buildings will be destroyed periodically until either the player decides to stop or the holding is destroyed. You can simultaneously pillage multiple holders per province too. The revolt risk has also been capped at 30% while the revolt size has been made more sensible (larger!).

Speaking of Nomads, when a non-nomadic realm conquers an empty province from a horde, the province now gains some revolt risk from Nomad Agitation. This effect remains until the nomads are pacified, either by constructing a Castle or City, or if Tribal by constructing at least 2 buildings. If a province has not been pacified upon succession it will break away and spawn a new Nomadic ruler.

Some new targeted decisions have been added in 2.6/<Secret DLC> too:


We have added around 50 new nicknames, here's a selection:

These images have been edited to fit together better, names are still in the regular places ingame

Another old annoyance, characters in the character finder now have icons to indicate if they will or will not move to your court, and another to show they are outside of Diplomatic Range: 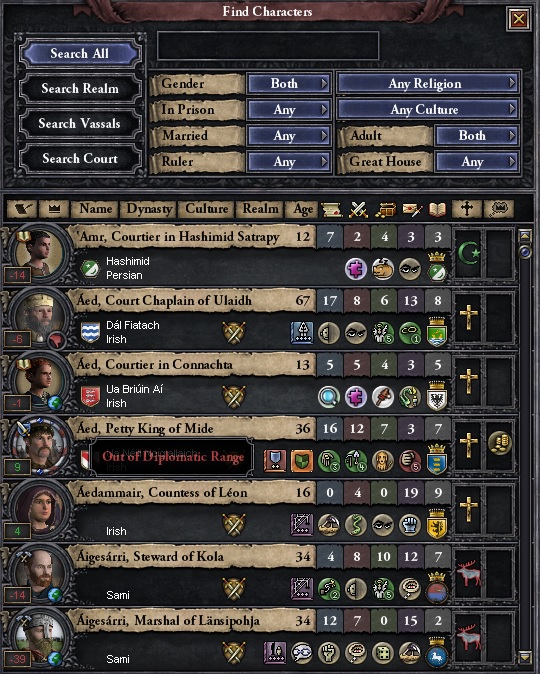 A final neat thing, we have added a Continue button on the Launcher to load directly into your latest savegame.

These are not all the cool things we have added, of course, but it’s a nice selection for now I think. Next week I will still be on vacation, but I have pre-prepared another DD about torture and executions!
Reactions:

I'm beginning to think <Secret DLC> is the name of the DLC
Reactions:

That sounds awesome! I really love those nicknames.
Reactions:

Although I assume it means no more kingdom of Frisia, which is kind of sad, though I guess you can still make a custom kingdom one...
Toggle signature
signatures are stupid and antiquated
Reactions:

Darkrenown said:
Another old annoyance, characters in the character finder now have icons to indicate if they will or will not move to your court, and another to show they are outside of Diplomatic Range
Click to expand...

Could you add a toggle to remove characters outside your diplomatic range from the list? They offend mine eyes.
Toggle signature
"You know how the English conquered Wales? One village at a time. Because no Welshman would run to the next Welsh village to warn them the English were coming. You all went down warm in the knowledge that the next village would get it too and they deserved it for being foreign." -- William of Stonham
Reactions:

This thing is turning into community patch. Good fixes
Reactions:

PAnZuRiEL said:
Could you add a toggle to remove characters outside your diplomatic range from the list? They offend mine eyes.
Click to expand...

We talked about it and may add it if there's time, it's trickier to do.
Toggle signature
Relentless madman.
Reactions:
S

Lord of the Pings

was this not supposed to go up yet?

What will happen when favors are not used and the vassal refuses?
Reactions:

Would be nice if the nomad AI would pillage
Reactions:
E

Darkrenown said:
Owners of <Secret DLC> may ask their vassals individually to end their wars with each other, or force them to do so with a favor. When favors are not used, the vassal may accept or refuse or may accept in exchange for cash or gaining a favor from you. If the aggressor is asked to and agrees to end their war they are also barred from declaring new wars on your other vassals for a time.
Click to expand...

That is so great! Thank you very much for this!
Reactions:

Darkrenown said:
Owners of <Secret DLC> may ask their vassals to return to gavelkind succession, or force them to via a favor.
Click to expand...

That's amazing but odd and unexpected the mind just reels at the possibilities though.

I do wonder what if any limitations will be had in regards to when or to whom I can request this. Am I really going to be able to sit on primogeniture and ask or favor force a vassal to gavelkind. Honestly that would be really sweet.

The find characters window improvements are also very nice, and so is the continue button. Now all the character finder needs is a few buttons to save and load one or maybe a few specific search criteria.

Any chance to have the choice between classic education and conclave education in game rules?
Reactions:
G

Great changes. For the character finder, I would be happy with some extra filter like browsing only people who are NOT in my realm or in Vassals tab who are or are not direct or filtering those who have claim on something but I can't be that greedy I guess


Darkrenown said:
Owners of <Secret DLC> may attempt to recruit prisoners who do not like their liege.
Click to expand...

With them being imprisoned what is the gain though?


Darkrenown said:
Owners of <Secret DLC> may ask characters who are unlanded and unemployed to leave their court.
Click to expand...

Yes! This has been soo soo needed.

Darkrenown said:
Owners of <Secret DLC> may ask their vassals to return to gavelkind succession, or force them to via a favor.
Click to expand...

Darkrenown said:
but I have pre-prepared another DD about torture and executions!
Click to expand...

Looking forward to it; better start oiling the racks!

animatrix37 said:
was this not supposed to go up yet?
Click to expand...

I rather think that the automatic posting failed and he had to manually do it.
Toggle signature
We need Chalcedonian Christianity in 867 A.D. instead of Catholic/Orthodox split for Crusader Kings III. Copy and paste this into your signature if you agree!

I didn't even see the Gavelkind thing. Can't even count the number of times I've had that massive vassal who keeps inheriting duchies and then I'm stuck on primo succession...
Toggle signature
signatures are stupid and antiquated
Reactions:

Wagonlitz said:
With them being imprisoned what is the gain though?
Click to expand...

1: Imprison a guy with a claim on your enemy's realm.
2: Befriend and convert him to your religion and/or matrilineally marry your daughter to him.
3: Press his claim
4: profit?
Reactions:

You may cancel tributary status of your tribute-payers

Sweet finally this is going to be a thing. its annoying when you have a Tributary and you cannot cancel it when you want to attack them for there land !.