Hello all, it’s time for another DD about ZombieInvasion <Secret DLC*>! Today we’ll take a look at what we’ve done to the Maimed trait. Well, we’ve removed it! People without <Secret DLC> can still be Maimed, of course, but the lucky owners of <Secret DLC> will instead receive more specific injuries, such as: One-handed, One-legged, One-Eyed, Disfigured, or Mangled (this represents severe trauma to the torso, mostly). As well as allowing more specific wounds and flavor, this has allowed us to remove the Health penalty from most of these traits (Mangled still has one though). Instead, when you receive a maiming-type injury you will also receive the Severely Injured trait, which has some health and stat penalties, but will be lost after some time has passed. Afterall, while losing a hand is certainly not an enjoyable process, you do eventually heal up and can be perfectly healthy besides the missing appendage. Also, if anyone is feeling creative, please suggest interesting effects for these new traits - we do of course have some penalties on them, but I worry they are a little dull, so fire away and I may shamelessly steal your ideas.

Since both One-eyed and Disfigured affect the faces of characters, we have added a lot of new portrait props to reflect this. Here is a small sample of what you might see ingame: 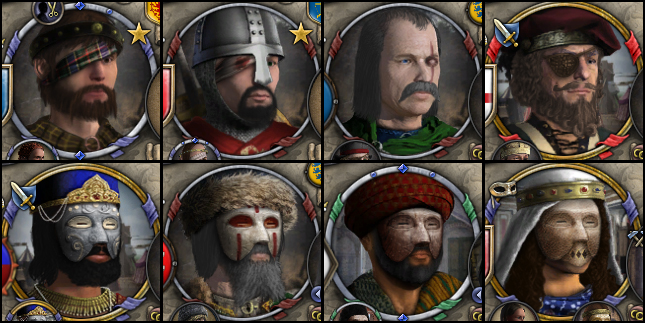 We have also added several events relating to life with missing body parts: 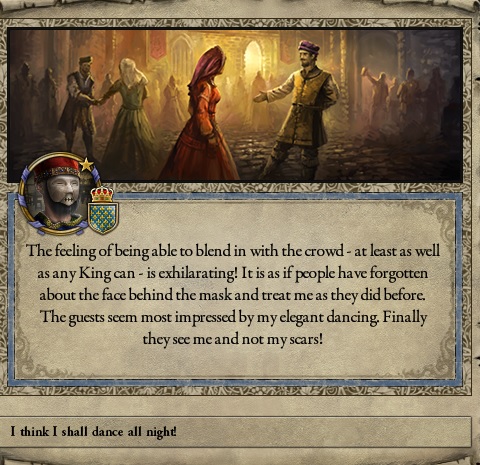 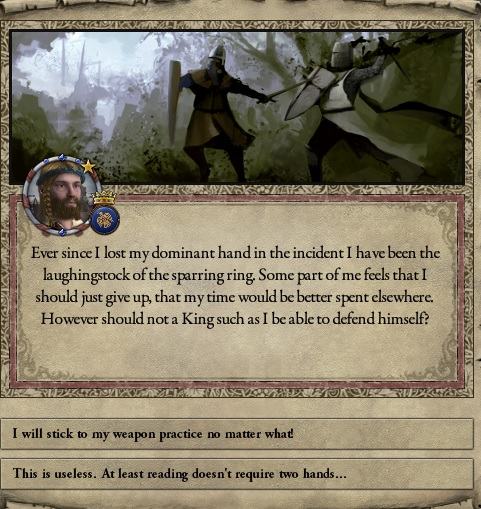 That’s all for now, next week I am not certain which DD we will show, either I will talk about some extra Pagan features we’ve added, or Doomdark will give you some of his thoughts about CK2. It will be a surprize!

I look back now and how much the game grown Its very hard for other titles to be big as CK2. I hope this patch/DLC heals the Conclave wounds so I can continue enjoy playing.
Reactions:

Will I be able to selectively torture my prisoners to get them these interesting traits?
Reactions:

crowdemon said:
Would some of these injures prevent anyone from having more kids?
Click to expand...

Unless the injury involves castration I don't think there's a reason to stop them from having kids?
Toggle signature
Don't like what I just said? Come Play werewolf and you can kill me!

Darkrenown said:
That’s all for now, next week I am not certain which DD we will show, either I will talk about some extra Pagan features we’ve added, or Doomdark will give you some of his thoughts about CK2. It will be a surprize!
Click to expand...

Furthermore, I believe all features that change balance and/or general feeling of the game should be either optional or DLC-locked.
Reactions:

Emperor of the Barony

The CrusadeZ is looking good.
Reactions:

crowdemon said:
Would some of these injures prevent anyone from having more kids?
Click to expand...

Mangled/Severely Injured have fertility penalties, but they don't 100% stop it.


jordarkelf said:
Will I be able to selectively torture my prisoners to get them these interesting traits?
Click to expand...

A bit actually, details in a later DD!


TheMightyBaron said:
The CrusadeZ is looking good.
Click to expand...

"That peasant rebel has got no nose!"
"How does he smell?"
"Awful."
etc.
Toggle signature
By God I have leaped over a Wall, by God I have run'd through a Troop, and by my God I will go through this death, and he will make it easie to me.​
-- Major-General Thomas Harrison, Fifth Monarchy man, unrepentant regicide, on the scaffold.​
Reactions:

Is that going to be a thing, or is it just for the narrative?

You know, sometimes when someone loses one of his sences he starts developing others. So, I think that it could be a nice idea that a blinded ruler couold have a chance to aquire an "increased hearing" trait or something like that. It would increase his intrigue stat, because he could better hear wishpered conversations at his court and whatnot.
Reactions:

I hope Severely Injured characters will still have a high risk of dying. Since the blood loss and infections... Ofc when you lose a part and heal it it doesn't effect your health, but the process of healing it (or not) is really what does effect health.
Reactions:

Since you asked for ideas how about adding new assassination plots involving one-legged for example weakening the crunch/peg-leg/whatever the person is using to walk with. One eyed could cause have events when you are in combat where an enemy attacks from your blind spot or making hunts harder since you would have inferior ability to tell distance, one handed for hoards could lower prestige since you would have slight trouble with horse riding or perhaps the inability to go on hunts since you could not use a bow, the other two I cannot think of anything. Although I am surprised you did not take the chance to add a deaf trait for this dlc.
Toggle signature
A (civic) nationalist and center-left American.
Reactions:

It would seem appropriate for certain assassination/death events to be altered if not replaced entirely depending upon missing parts.

One-handed would have a harder time grabbing onto nearby things for dear life, and would have the misfortune of not being able to give a potential rescuer his or her hand. Barring a metal glove thing, which could tear off anyway depending on gluttonous trait maybe? One-handed needs a metal glove potentially, please. Or maybe a hook, which could with practice negate the combat penalty of having one hand..?
One-legged would be vulnerable to balance-related issues possibly, or a would-be assassin could have a giggle by stealing a false leg and leaving the target to a "certain demise" near some nasty creature(s) or peril(s). Could act as a lethal weapon from a jumping position depending on how it was designed, maybe? Ignorant of any historical basis for having a deadly peg leg though.
One-eyed can't think of anything beyond the blind spot and a crescent moon helmet.
Disfigured could be rendered unrecognizable in the streets leading to "no one recognizes me!" shenanigans. Would be interesting if a paranoid/lunatic could wear a mask simply because such a character may want to do so.
Mangled is mangled.
Reactions:

Also, I think a character should also gain disabilities with old age. You know, start limping, become deaf, etc. Do you have a plan to implement something like this?
Reactions:

I recall the mythology of Odin and Mimer (Mimir), and how Odin sacrificed his eye for wisdom - and how Odin afterwards appeared for the common men as a one-eyed stranger. So there could be some interesting events for Norse Pagans, where perhaps one-eyed people can be either "hunted" or "worshipped", or a really crazy/zealous ruler can maim himself that way, to gain the same knowledge and wisdom... Don't know, just the first thing I came to think of...
Reactions:

Will castration be a possible battle wound? (I don't see why not, and it is a nice way to reduce the character count)
Reactions: