Jump to latest Follow Reply
Menu
Install the app
You are using an out of date browser. It may not display this or other websites correctly.
You should upgrade or use an alternative browser.
Cities: Skylines 6012 Support & Bug Reports 8031 Suggestions & feedback 3011 Modding & Resources 1875 Official Information & Announcements 144 City Journals and Let's Plays 481 Cities: Skylines Console & Windows 10 Edition 897
Previous dev diary Next dev diary
Trolleybuses!

Ever since Cities: Skylines was released, we have received hundreds of requests for one specific feature: Trolleybuses! And to go along with every one of those requests, vivid debates took place within the community about whether or not trolleybuses are too hard to implement, if the feature is “too niche” or if “they” actually ever even read the suggestions posted on the forums.

Let us assure you that we are indeed constantly listening, and every single idea is considered when we are deciding what to do next! Also, we are just as enthusiastic about public transport as you are, and you would have to be very creative to suggest something that we would consider to be “too niche”

The reason trolleybuses have never been added is their technical complexity. Trolleybuses are basically “trackless trams”: electrical buses that draw their power from overhead wires. Unlike trams, they utilize two wires and two trolley poles to complete the electrical circuit. And like a normal bus, a trolleybus is able to change lanes and stop on the side of the road. As the bus is moving, its poles rotate and tilt to stay attached to the wires. In the game as well as in reality, the trolley poles are the most tricky part of the whole system.

We are glad to inform you that we have managed to overcome the technical challenges, so Trolleybuses will finally be available in Cities: Skylines – Sunset Harbor! 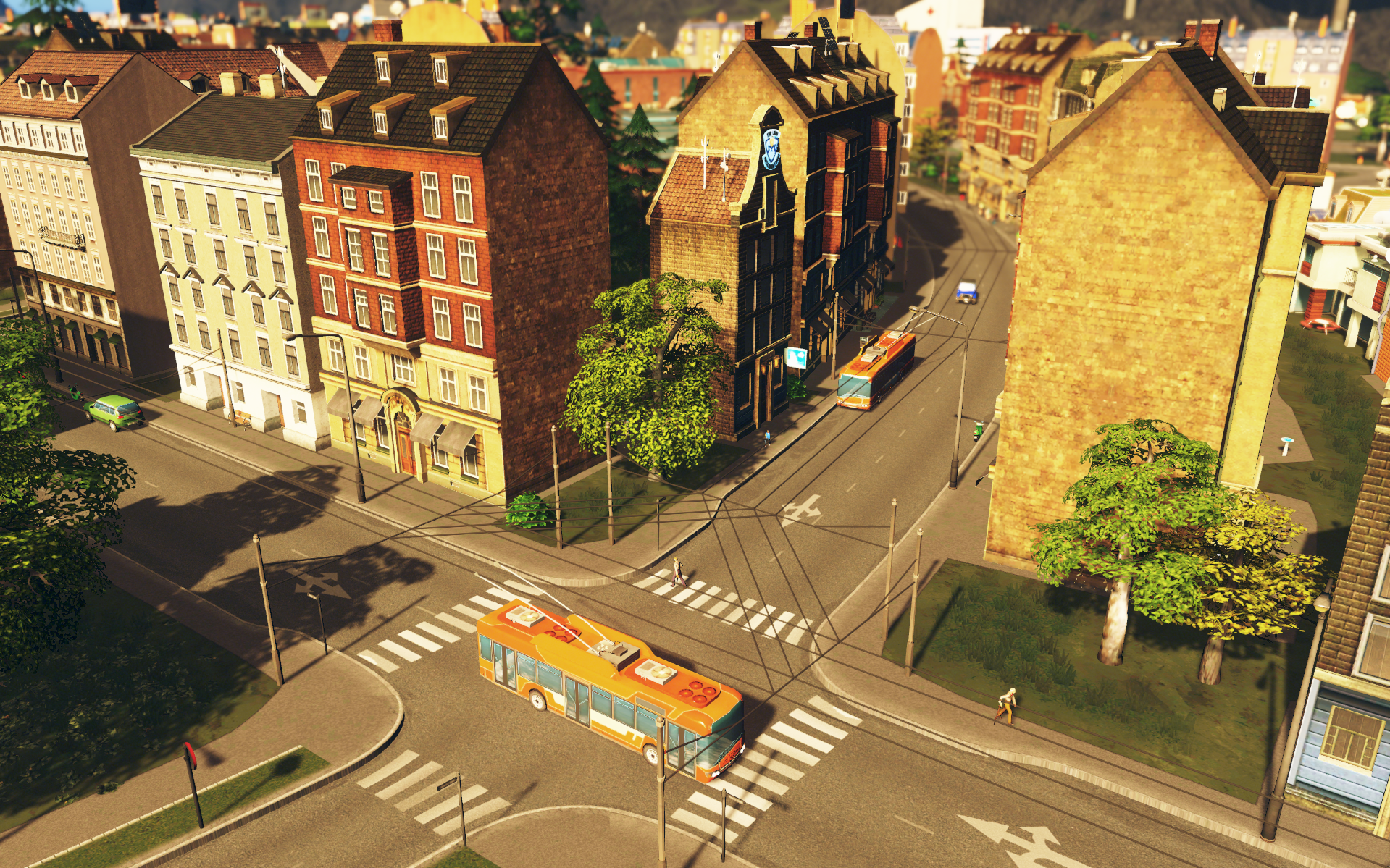 They are finally here! 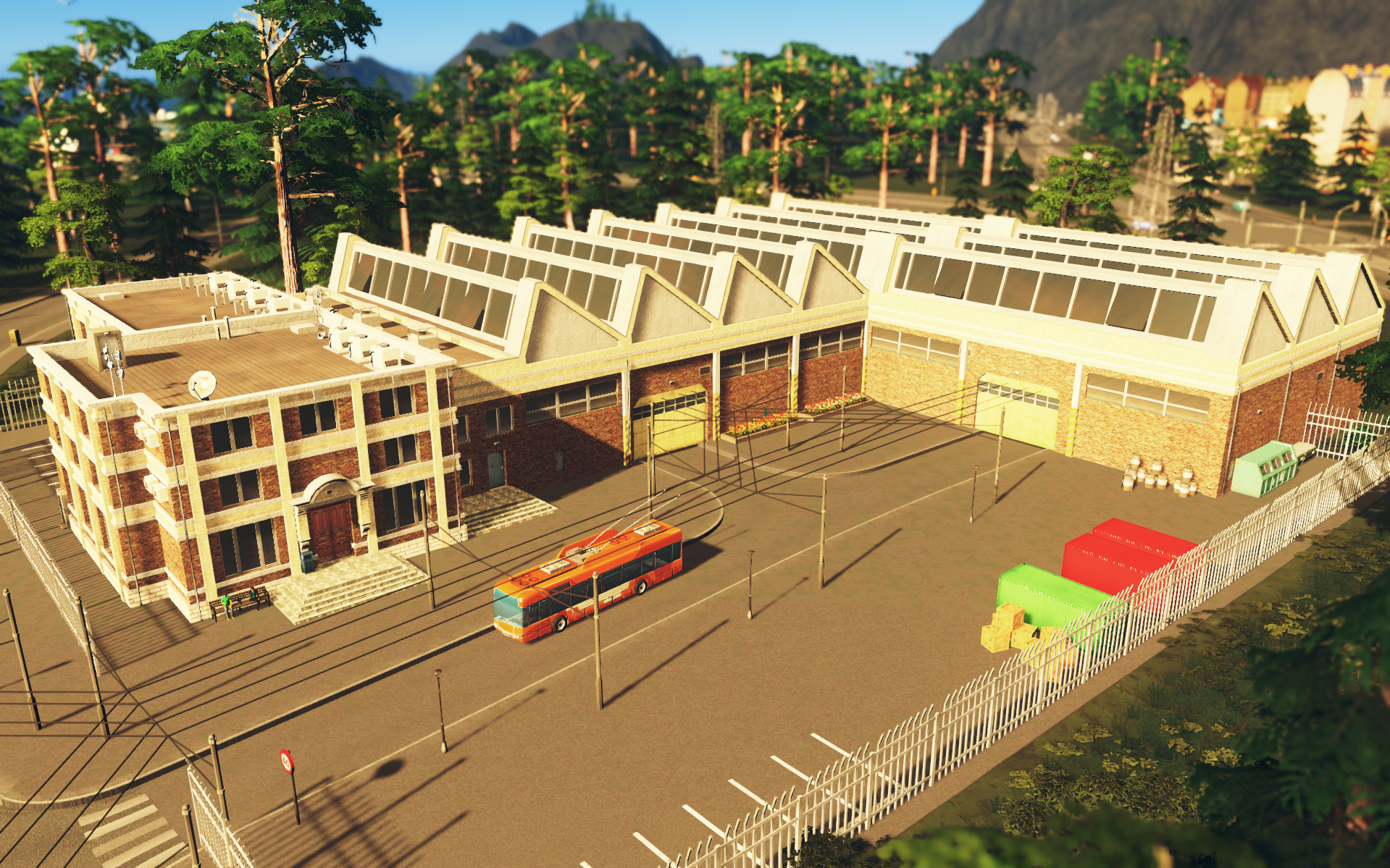 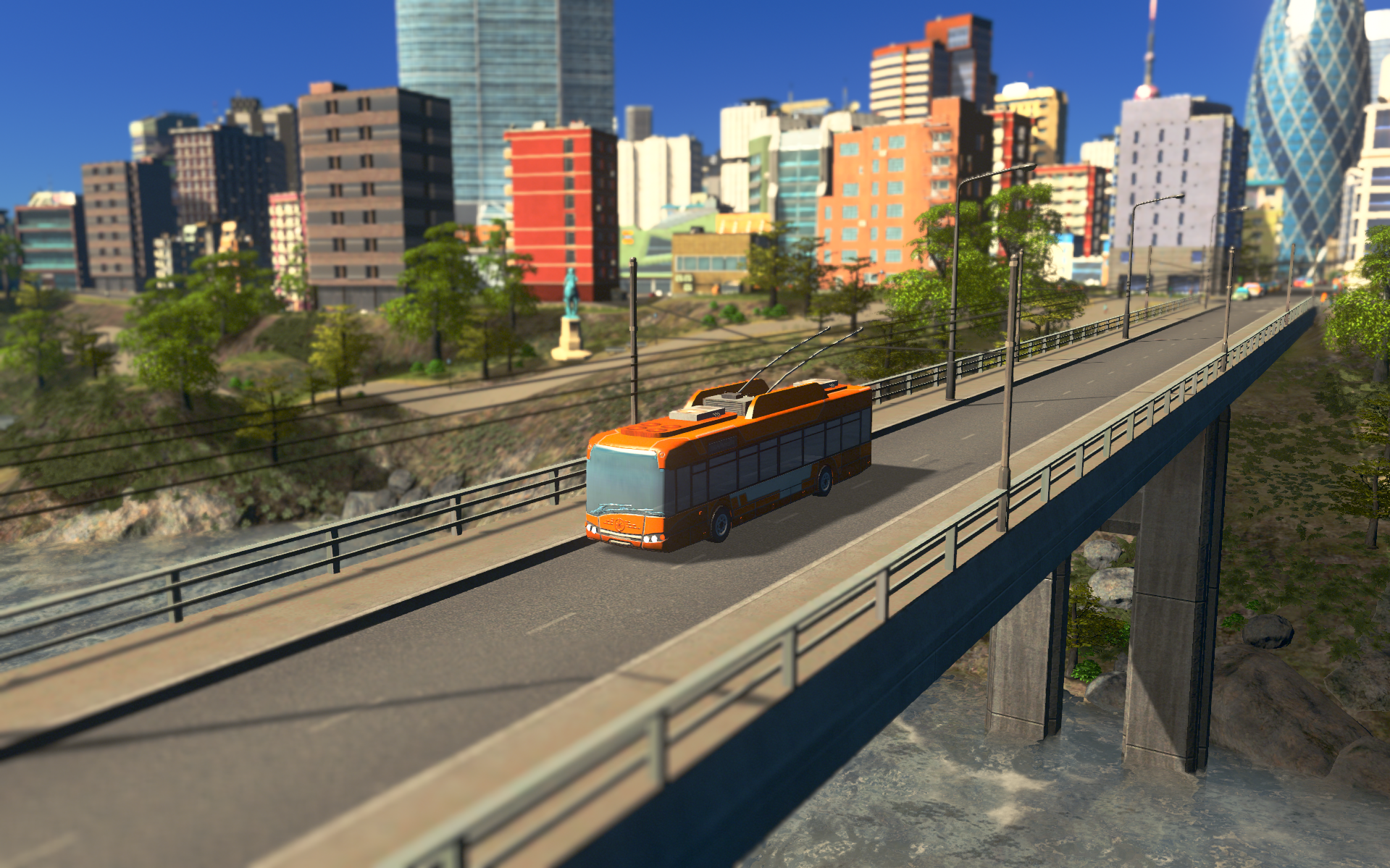 Taking passengers over the river.

That’s the easy part! In the second part of this Dev Diary, we would like to shed light on what we did to make the trolley poles behave realistically. Unlike other diary entries, this one will be slightly more technical. Even if you are not that math and geometry savvy, we still hope you enjoy this inside look! 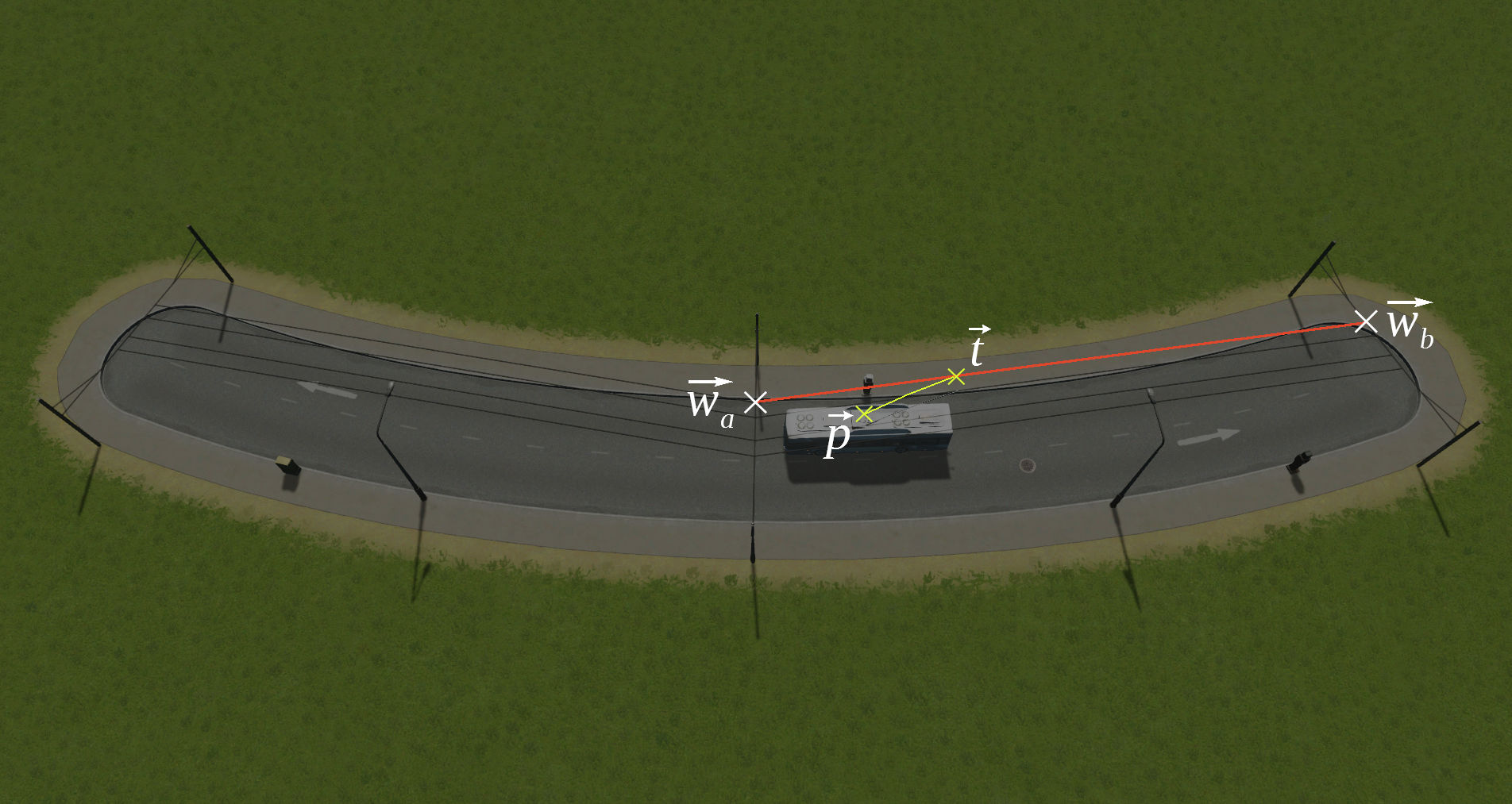 Let’s take a closer look at the roads! On every road segment, you will find three catenary masts: One at the start, one in the middle and one at the end. The electrical wires span the masts, and with some mathematical calculations we can find out the start and end coordinate of each wire section. Let’s call them

(using a small arrow to mark them as 3D vectors).

When the bus is on the road segment, we want its pole to connect to the overhead wire defined by the mathematical formula above.

is the coordinate where the pole is attached to the wire.

The game knows how the bus is positioned and rotated in the world, and from that it is possible to calculate the coordinate where the trolley pole is attached to the bus. Let’s call it

The trolley pole is made of sturdy metal, so it cannot stretch. That means the distance between the coordinate where the pole is attached to the bus (

) and the coordinate where the pole is attached to the wire (

) must always be equal to the length of the pole. Let’s call it

and define this formula to take that into account:

With a few tricks we can transform it into a quadratic equation:

We can use the quadratic formula to solve the equation.
We will get zero, one or two values for

Note that there will be no solutions if the part in the square root is negative (which happens if the wire is too far away from the bus). Note that the solutions for

calculated by this formula could also be out of range (

into our wire formula

. One will be above the front part and the other above the back of the bus: 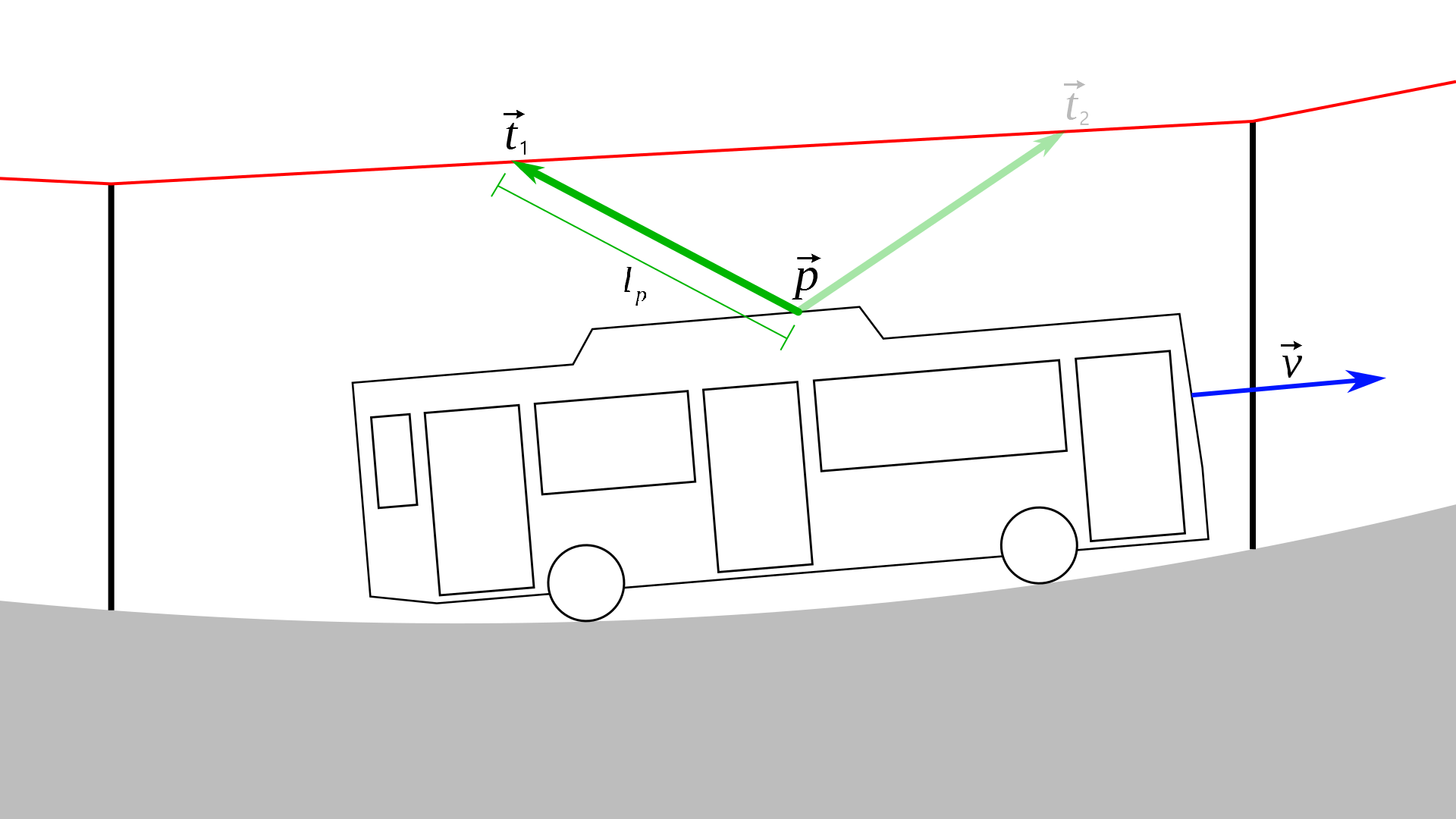 As the pole of a trolleybus is typically facing backwards, we need to find out which of the two positions is the correct one.

Haven’t had enough of vectors yet? Let’s define a few more:

Uh, that was a lot of math! Now that we know where the pole is attached on the bus (

) and where the pole is attached to the wire (either

), it is possible to render the pole in the correct position and rotation.

As we learned, a trolleybus has two poles (otherwise the electrical circuit would be incomplete), so we will just repeat the same steps to draw the second pole.

And now you know what kind of stuff goes on behind the scenes to render the poles! Of course, in order to make trolleybuses realistic, this was just one small portion of the overall work that was needed! 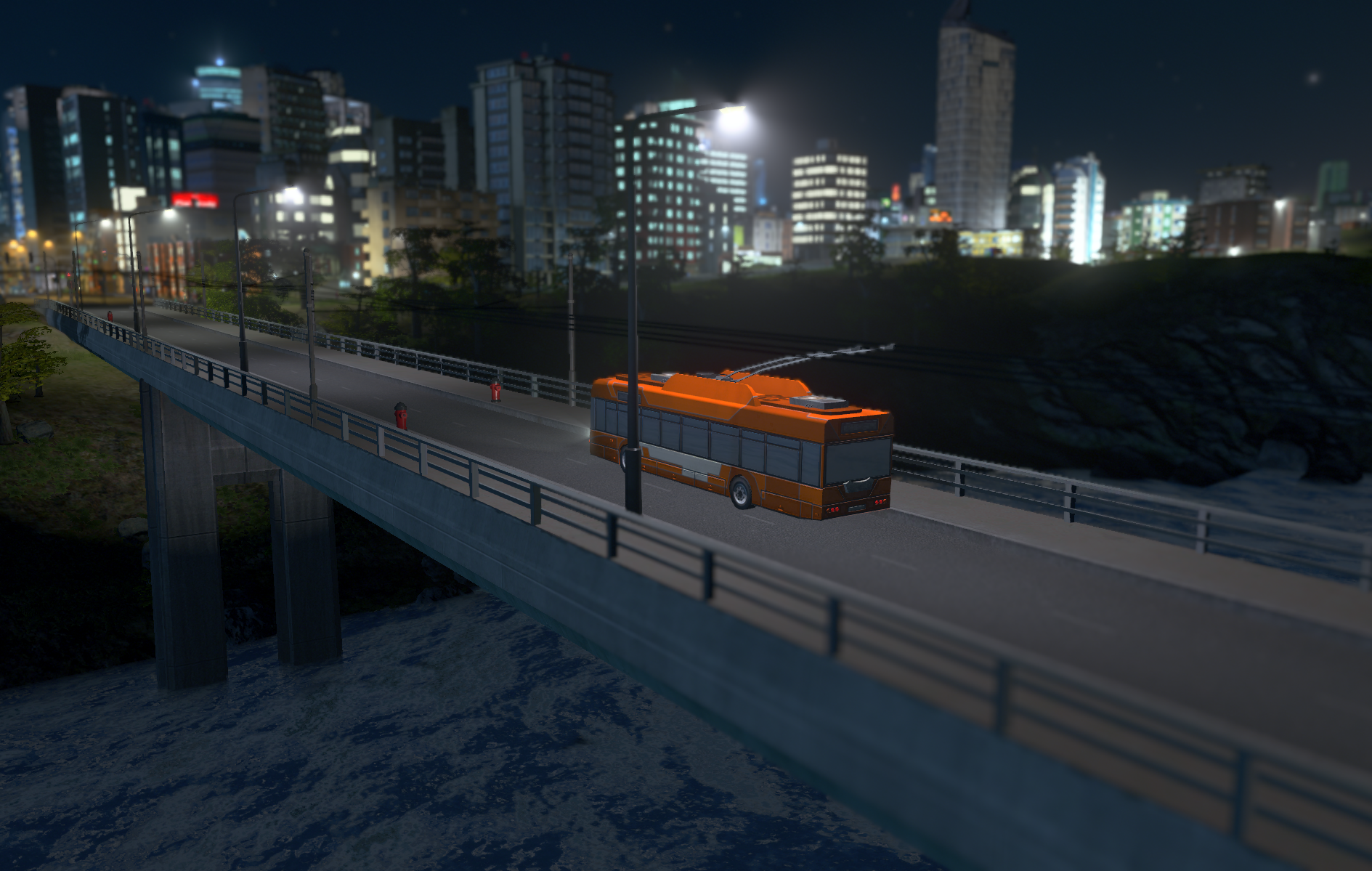 The last shift of the evening.

Once again, we've reached the end of a Dev Diary. We hope that you liked this insight into the development of Cities: Skylines and that we didn’t scare you with all the formulas! Gotta say, the end result is really mesmerizing. We could just watch the buses circle around for hours! What do you guys think about the trolleybuses?

Never thought trolleybuses are actually going to be added on base game, but at least it got what some people requested for (In the Philippines no trolleybus systems were ever used, as the country instead built trams during the 19th century, while elevated metros replaced them by the 20th century).

While I can use some of these trolleybuses as a cheaper variation of trams in custom or non-PH cities, I might not use this when building Philippine cities.

Also the main post has a lot of broken .img previews. Looking foward to buy this on release day!

Meesmoth said:
Oh man the post contains a lot of broken .img previews for me. Looking foward to buy this on release day!
Click to expand...

Arrgggh, I will fix those asap

So you are telling us, that the DLC was delayed by 6 months because you had to finish the equations?

Just kidding, looks fantastic! Can't wait to try them out! (Even when the power lines are clipping with the depot doors)
S

too long didn't read (the equations)

Will the model selector be available for trolleybuses or is it still reserved for normal buses?
C

Fun fact: From step 1 to step 4 you proved the first binomial formula!
B

I wanted a Bus Rapid Transit(BRT) system that would fit in a modern metropolis, but the trolley bus is fine. good job.


Not more than BRT, but I agree with the additional elements of this DLC. However, if there is no discrimination from existing transportation ... maybe ...
C

Will they be able to stop on bus stops? It would be very silly without integrated stops, which is something I find quite frustrating about trams in the game.

Simple math, but still brought back nightmares from vector classes in Physics.

So I guess no other vehicle has a need for such complex calculations for rendering, right?
Toggle signature
@Colossal Order / Paradox: Stop taking advantage of any limited "monopoly" you or the gaming industry has. Just because others have gotten away with stuff, doesn't mean you should morally continue imposing the Stockholm syndrome. Learn to use the tools you already have. Marketing efforts is for people who want to hear it, NOT for those of us who don't. So don't abuse your control by keeping the dumb launcher. Remember wanting to play a game and you could just double click something ONCE to get in? Steam can be annoying enough. We will continue blocking your launcher.
_______
YouTubers: You MUST plan good public transport around 30k pop.
Me: 190k pop and 75% traffic flow. CAR CITY!!
R

Can trolleybuses use streetcars roads?

Eh, I might use this as a single line along the harbour but the tram will always be king.

How many trolleybus roads will be added?

Now I just wanna know if trolleybuses and trams can work together or not.
K

As we learned, a trolleybus has two poles (otherwise the electrical circuit would be incomplete), so we will just repeat the same steps to draw the second pole.
Click to expand...

Will there be any benefit to modeling a single wide two-contact pantograph attached to the twin contact wire overhead line instead? (I know dual trolley pole is the norm)

Kovepi said:
Will there be any benefit to modeling a single wide two-contact pantograph attached to the twin contact wire overhead line instead? (I know dual trolley pole is the norm)
Click to expand...

Do you know this one is only for static charging? The pantograph goes down when in operation (it would not be able to run like this without precise guiding system like having tracks = that would be a tram or a train). So this is in no way a trolleybus but an electric bus equipped with batteries

Love the trolley buses and the DLC can't wait for it to come out, keep up the good work
I

I have a lot of questions.


Will they be able to stop at bus and/or tram stops?

Will they be able to use tram tracks and lanes?

What will their capacity be?