Jump to latest Follow Reply
Menu
Install the app
You are using an out of date browser. It may not display this or other websites correctly.
You should upgrade or use an alternative browser.
Cities: Skylines 6117 Support & Bug Reports 8281 Suggestions & feedback 3060 Modding & Resources 1885 Official Information & Announcements 146 City Journals and Let's Plays 482 Cities: Skylines Console & Windows 10 Edition 907
Previous dev diary Next dev diary
Greetings again, fellow city builders! I have great news today. As a part of free Parklife update Cities: Skylines will expand more into Tourism. In a nutshell this means that we want to give you a better understanding why and how tourists are coming to the City and which locations they visit. All this to help you make your City the number one tourist attraction!

Tourism finally gets its own Info View and it replaces the Tourism subpanel under the Outside Connections. The new Tourism Info View provides more valuable information on tourist activity than before, as well as more detailed information of the various attractions in your City. The new panel is unlocked at Milestone Worthy Village and shows the tourist presence in the city more precisely and the Attractiveness of various buildings and areas with an Attractiveness value. This means you can now have quick and easy visualization of both where your tourists are visiting and which buildings and locations attract tourists. This helps you plan your road layout, public transportation lines and give a general idea which areas in your City are drawing in the visitors. The budget panel has also been updated with more details of money spent by tourists.

We have added 10 new tourist models as a variation your citizens and to bring more ethnicity to the City streets. And the best part? New Tourists models are free content and arrive to every City that has tourists automatically! Are you ready?

With this update we are also improving how the tourists arrive to your cities. As a part of industry boom the car factories have created Vans and Trailers for Campers and they seem to be quite popular among some, more wealthier tourists. This marks a new dawn for those tourists who come to your city by motor vehicles.

And for those who (will purchase / have purchased) the Parklife DLC (Thank you by the way) we have the awesome Hot Air Balloon, Double Decker Sightseeing Bus vehicles and the Park Staff personnel jeep on top of those Camper Vans & Trailers for the pleasure of your tourists and citizens alike. We can't wait to see what you guys make out of those in the asset editor and in in-game.


Camper Vans and Trailers are a regular sight in a City with focus on tourism. You can find them usually near different attractions.

Last but not least, someone might've already noticed little alligator and chirper mascots occasionally appearing in our screenshots. Well, that's because we have mascot models appearing with Amusement Park and Zoo buildings as a part of paid content. The mascots are there to take care of your buildings and entertaining visitors and you can also find them in Asset Editor along with Park Staff. All these new workers are there to ensure your Park Areas are kept in top notch condition!


Chirper Mascot greets curious lookers while en route to the next Zoo building.
Click to expand...

These last two days are going to be painful...

How did you know that I was longing for a new tourist cim? Nothing against big boy and his fanny pack, or slick airport lady ofc!

First thing I look forward to adding to my Berlin build is tours through the city center with its parks and monuments.
Toggle signature
Berlin 1:1 updates: https://twitter.com/AmiPolizeiFunk

I love this update, thank you CO. Now I can really let my creative juices flow

co_emmi said:
Camper Vans and Trailers are a regular sight in a City with focus on tourism. You can find them usually near different attractions.
Click to expand...

Are those noise walls on the sides of the two-line streets a new thing? An if yes, are they part of the free update or Parklife (or a mod accidentally left active)?
R

Torakka said:
Are those noise walls on the sides of the two-line streets a new thing?
Click to expand...

Highways with noise barriers have been in the game since day one, the variations you see there are from Mass Transit.

Torakka said:
Are those noise walls on the sides of the two-line streets a new thing? An if yes, are they part of the free update or Parklife (or a mod accidentally left active)?
Click to expand...

those roads (the two lane highways) are specifically from Mass transit, but the 3 lane from the base game has the noise barriers version too

ristosal said:
Highways with noise barriers have been in the game since day one, the variations you see there are from Mass Transit.
Click to expand...

Ah, I initially thought that the roundabout in the third picture was made with two-line streets, but they appear to be two-line highways on closer inspection. The speed limit (100) and especially highway marker should probably have give that away. =P 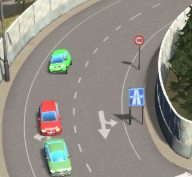 They ensure drivers get the message when they look in their mirrors!
M

Looking forward to this dlc- introducing loads more gameplay. Can I ban that Chirper mascot? Just wish the tourism numbers were a bit more realistic- investing so much time and effort only to find the grand total of 5 tourists visited the park last week can crush the soul!

Can't believe there's a crocodile mascot and no crocodiles in the zoo!

All jokes aside, this looks fantastic. I can't wait to get my hands on it in two days.
Toggle signature
Three New Expansion Ideas for Cities: Skylines​
L

Can't wait for this DLC! The city attractiveness and tourist quantity is a bit confusing though because they both have purple.

Beer Fiend said:
These last two days are going to be painful...
Click to expand...

Even more so for me... internet at current location is painfully slow. May not be able to download the DLC when it comes out.

One of the faster results I have had. Won't be home until June.

Speaking of painful, will we be able to turn off the bird?

Well, it's like you read my mind. I like that we'll be able to see a rating of the overall city attractiveness and individual building attractiveness. At least now we'll have some ideas of whether we are doing well. I can't remember from the streams, will individual tourism buildings and parks also show an individual attractiveness rating in their details view?


muttonnoir said:
Just wish the tourism numbers were a bit more realistic- investing so much time and effort only to find the grand total of 5 tourists visited the park last week can crush the soul!
Click to expand...

Soul-crushing is an adequate way to describe it . Even though this new UI will at least let you know if this small number is "good" or not. I wonder what would be the best way to improve this. CO could just multiply all the visitor numbers by a factor, but then it wouldn't match the number of people you actually see visiting your park - there's something nice about the count matching the simulation you see. The fake number is actually the total population which you won't ever see in motion all at once, but I guess people would start crying if the max pop was suddenly a few thousands instead of 250,000 or so.

I guess the best way to put that number into context would be to see the number of tourists relative to the total moving actors.
Example view with made-up numbers, pedestrian count is high because the game can simulate a lot more of them than vehicles AFAIK:

Trucks and other traveling cargo could be shown in another view, though knowing how much of your total traffic is industrial would be nice too.
Toggle signature
Please let us play old Cities:Skylines versions like the CKII, EUIV and KSP communities.
... and for Vlad's sake, stop ruining your reputation by retroactively ruining Magicka, and Fix Your Mess.

Beer Fiend said:
These last two days are going to be painful...
Click to expand...

I agree but the payoff in the end will be well worth it!

I agree that the number of tourists is too low. I mean, it's sad to see a dozen tourists wandering around in the city, if there are so many buildings and locations for them, it gives me the impression that something is wrong, many think that tourism is bugged because the low numbers. It would be nice to see more tourists in the simulation, giving more satisfaction while planning and actually building tourist based cities.
Toggle signature
It may happens I edit a lot my posts: it's because my english is not so good, and I have to double-check what I write.

Fox_NS_CAN said:
Even more so for me... internet at current location is painfully slow. May not be able to download the DLC when it comes out.

One of the faster results I have had. Won't be home until June.
Click to expand...

Think of it this way, when you get on it, the mods will more than likely be all fixed.

That's how I'm thinking of it as I likely won't get a proper go on this until next week (work sucks!)

Finally! In the whole park life DLC that is the most welcomed improvement for me!

I hope the simulation improvements will carry on in the future dlc-s and updates. Industry improvements: better technology tiers (even for housing), more realistic farm industry (If it even means the separation of agro, heavy industry, light industry, etc from a generalized industry zone - just like in the books. Of course it should be spceified by demand, education, and city size. ) Anno like production chains and air pollution with wind direction are still must have category in my opinion. In a strategy game, especially if it is a complex management game, is always important to be able to as representative and indicative of the users acitons and game status as it can be .