Jump to latest Follow Reply
Menu
Install the app
You are using an out of date browser. It may not display this or other websites correctly.
You should upgrade or use an alternative browser.
Cities: Skylines 6183 Support & Bug Reports 8509 Suggestions & feedback 3084 Modding & Resources 1896 Official Information & Announcements 147 City Journals and Let's Plays 486 Cities: Skylines Console & Windows 10 Edition 930
Previous dev diary Next dev diary
This week our topic is zone specializations. Green Cities has many new options that help you to build more diverse cities. Specializations are rules for areas, defining what the areas specialize in. Before Green Cities you could for example specialize an industrial area for farming or oil production, or if you own After Dark expansion, have commercial area that caters to tourists. With Green Cities the selection becomes larger and we are introducing our first residential area specialization. The specializations are related to eco-friendly values, as the name of the expansion reveals.

The basics of creating a specialized areas are as follows: build roads and zone an area, then use the district tool to mark it as its own district. Then go to specializations menu and choose the tab for the type of zone you just laid down. The tab has all the specialization options for the zone type. You can specialize any district for any of the specializations, but unless you have the defined zone type within the district, there will be no effect. Some specializations rely on natural resources. If you specialize a district for oil industry, the industrial zones within the district that lie on natural oil repositories will built oil extractors. These extractors pump out the oil and ship it to places that require oil. If your city has an Oil Power Plant, it can now use the oil produced within the city instead of ordering oil from outside the city. The benefit for the city is that taxes are paid on every step of the production process. If the natural resource comes from outside the city, your city does not get taxes from the extracting process. If in the specialized district there are zoned industrial areas that are not on oil repositories, those areas will build oil related industry, such as refining factories and plastic production. They will use oil resources and order the oil preferably from within the city, but will automatically switch to outside providers if they need more than the city produces. The ideal ratio is about two refinery buildings per one extraction facility. 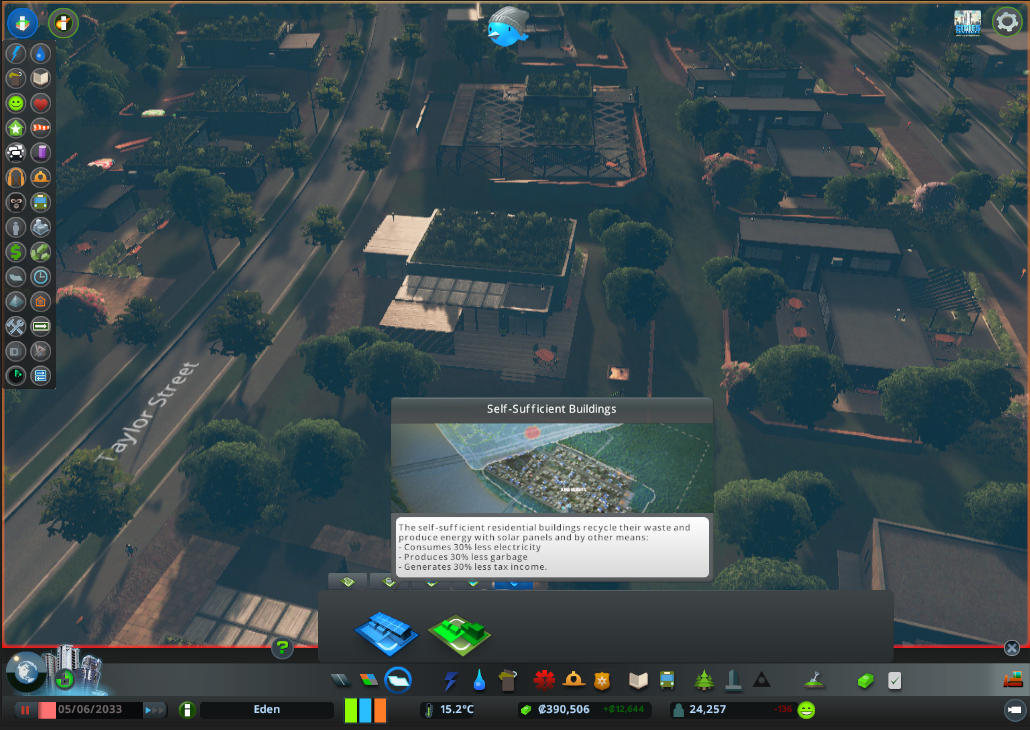 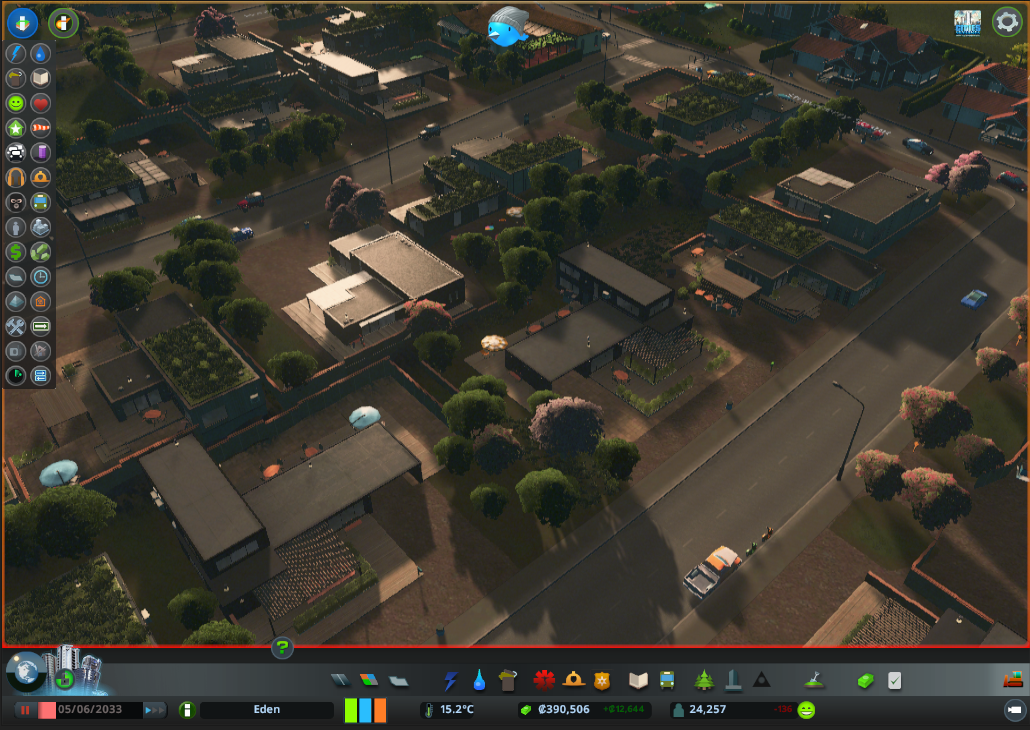 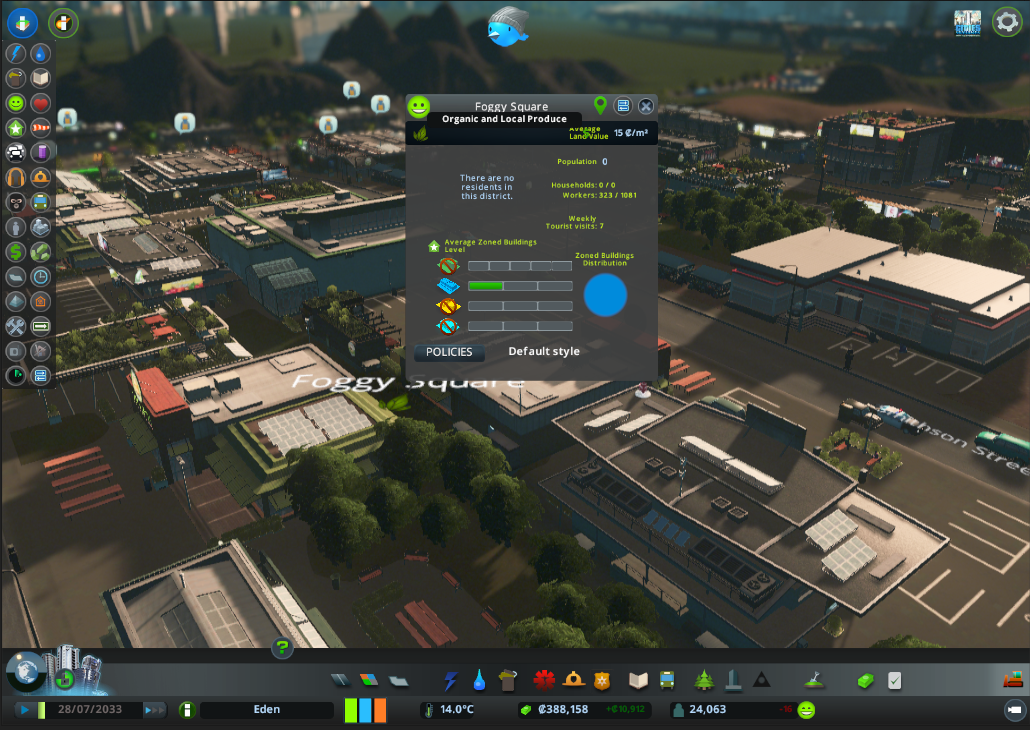 IT-cluster is useful for a more developed city, as it is an office specialization. IT-cluster has about 50% less employees than regular office zone, and uses about 30% more electricity for its wacky gadgets, but they do produce roughly 30% more taxes. These high-tech IT businesses hone inventions and hog patents, but make the city a lot of money while doing so. 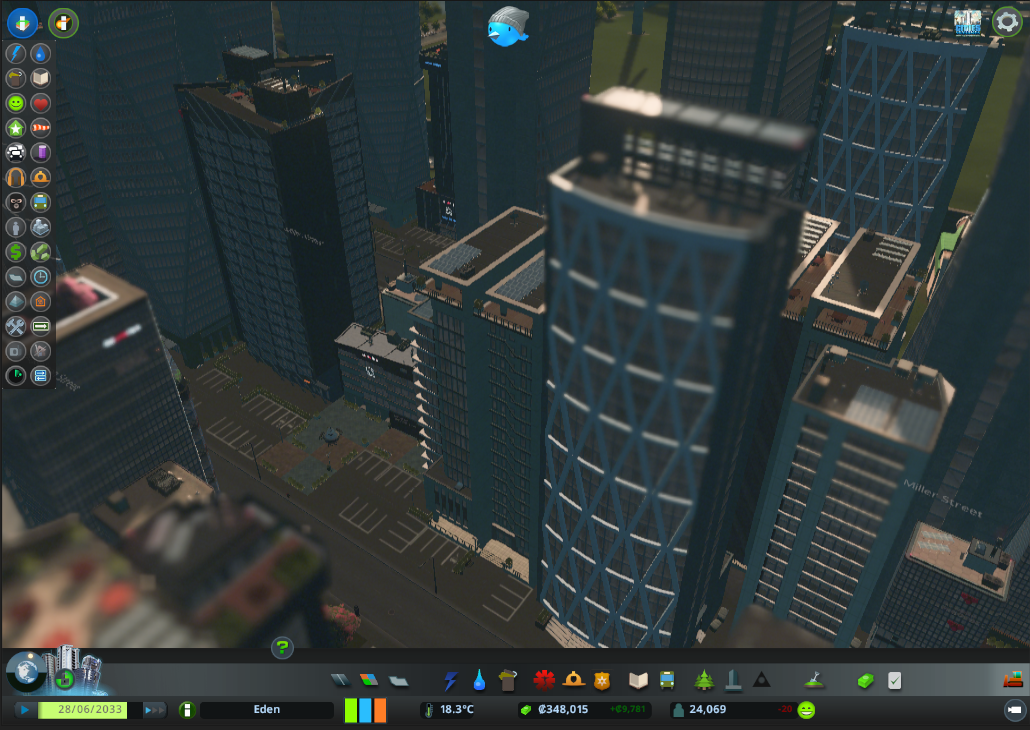 Visually all of the new specializations look sleek and modern, very fitting for a high tech smart city with green values. The unique game play effects of each specialization offer lots of new possibilities on how to build your city. As the new specializations are also available in existing saves, you can also tweak existing cities to be more self sufficient and eco friendly.
Last edited: Sep 28, 2017
Click to expand...

This expansion is full of nice surprises. Well I'm thinking about water. Waterfront dlc would be nice. I'd like to see new type of quay or small canals. Houseboats, floating houses or living on the water. Do you prefer lift bridge or ferry ship for your cars. Beach, high levels for tourist and leisure specialization would be nice supplement. Wetlands would have to drain. Oil platform on the sea would contaminate water and lots of new water things. "You must live on the water" But I know that it is too early to think about new expansion if current dlc hasn't released yet. I believe that you will make a lot of new expansions and it will possible to build real cities in the game soon.
D

Can we create our own specializations, perhaps as mods?
Toggle signature
The Anime Revolution is coming: https://steamcommunity.com/workshop/filedetails/?id=2171373162

Co_Karoliina said:
Self-sufficient buildings is a residential specialization that allows residential housing in the area to use 30% less electricity and produce 30% less garbage, but on the downside also pay 30% less taxes, as they use less city services.
Click to expand...

Strikes me that self-sufficient buildings ought to use zero electricity rather than just a measly 30% reduction!


Co_Karoliina said:
Organic and local produce works for commercial areas. Where normally commercial buildings order goods to sell, when they specialize to organic and local produce, they can actually produce some goods themselves. Specialized commercial also produces less waste (-20%), but does use little bit more electricity (+20%) to function. This not only is very efficient, as no resources need to be spent on producing goods by having polluting industry, it also lessens noise pollution by lessening the amount of trucks traveling to and from the commercial buildings.
Click to expand...

Really not sure about these; the way you've designed them seem rather weird! Surely organic ought to be an alternative farming specialism producing more expensive food products which then give an indirect health benefit to the city? And local produce should require commercial properties to only source goods from within the city (no imports)?

slornie said:
Strikes me that self-sufficient buildings ought to use zero electricity rather than just a measly 30% reduction!
Click to expand...

By definition, they should not input or output (waste anyway, though possibly output energy or other useful things).

30% less on electricity, garbage and taxes. Is that really worth it, considering we get like, what, 80% of our income through residential taxes? I guess we'll see and shouldn't just focus on this one thing, I'm looking forward to the DLC.
Last edited: Oct 19, 2017
A

I haven't seen high density "local and organic" commerce yet. Hopefully it's at least possible to mod in.

Still wondering if the old specialisations are levelled now too...

I am looking forward to the IT clusters though, that will certainly help my Downtown Skyline. I imagine the Organic and Local produce commercials will only be kind of small, as to fit with the scenario.

slornie said:
Strikes me that self-sufficient buildings ought to use zero electricity rather than just a measly 30% reduction!
Click to expand...

That's what "self-sufficient" implies, but perhaps it could be done on a L1-5 scale. 15% reduction in power/water/garbage usage for each level (only Unabomber shack folk can be 100% self sufficient - it's not gonna happen in a city), and a 10% decrease in tax for each level, because no one's gonna let you live without taxes no matter how self sufficient you are! Or give you an option to cancel "eco-subsidies", and get all the tax back, while keeping them green.

Have we had any further information released on the contents of the free patch? I know they're working on a road editor but for Mass Transit the exact contents of the patch were the first things covered in the Dev Diary, whereas here they've been extremely silent.
Toggle signature
Three New Expansion Ideas for Cities: Skylines​
R

Giveaway412 said:
Have we had any further information released on the contents of the free patch?
Click to expand...

Based on Gamescon videos we'll be getting a noise pollution overhaul, and UI improvements where zoning will be laid over some info views.

I believe they think to future - close future - together with the dream of respect to mother nature somedays...
That topic said more and more in these days...plenty examples G20, Trump minded, natural disasters global warming and firms here & there creating green stuff.... (furniture, vehicles...)
recycle things is another thing written into the tendency..

It might not be easy to take some decisions "how to...." for that ambitous project for their game, sometimes

Fox_NS_CAN said:
And specialized areas can now level up. Is that just the new ones? Or the old ones as well?
Click to expand...

I would be surprised if that were the case. Current industrial and commercial specializations have two levels, they just work differently.

Turjan said:
I would be surprised if that were the case. Current industrial and commercial specializations have two levels, they just work differently.
Click to expand...

What he probably meant was industrial specializations are divided into extractors and processors. Therefore their function is different to what we're getting with this expansion.

What the microphone and speaker policies do?
Toggle signature
YouTube

douglasrac said:
What the microphone and speaker policies do?
Click to expand...

For future reference, you can find such info here:
http://www.skylineswiki.com/Policies

They are both from "Concerts", and they are turned on and off at the "Festival Area", and are city-wide only, so they appear on every district.

Megaphone is "Ad Campaign". Advertise the Festival to attract more visitors. Increases all band popularity by +1 per month. Cost: ₡9,000/week.
Microphone is "Premium Studio". A Premium Studio will increase the chances of a successful concert. Cost: ₡3,000/week.

I don't think "Premium Studio" does anything visible. "Ad Campaign" does seem to put some stuff up on billboards on city buildings.